The Republican and Democratic parties have each released some version of a platform or agenda for the 2020 election, and the release of these platforms raises several important questions for taxpayers.

Health care is, yet again, one of the most important issues facing policymakers this election season. National Taxpayers Union (NTU) has a stake in federal and state health policy for several reasons, chief among them that good health policy can foster innovation for consumers and cost savings to major federal- and state-run health programs for taxpayers.

What follows is an analysis of the 2020 Democratic Party platform on health care and the 2020 Trump campaign second-term agenda on health care (the Republican Party declined to produce a comprehensive platform this year). We will follow up with some NTU suggestions for pro-growth, pro-taxpayer alternatives that could serve either party well in 2021 and beyond.

While a detailed analysis of the two party platforms follows, it may be helpful to quickly and visually compare how Republicans and Democrats propose to tackle a variety of health policy issues. Illustrated in the chart below: 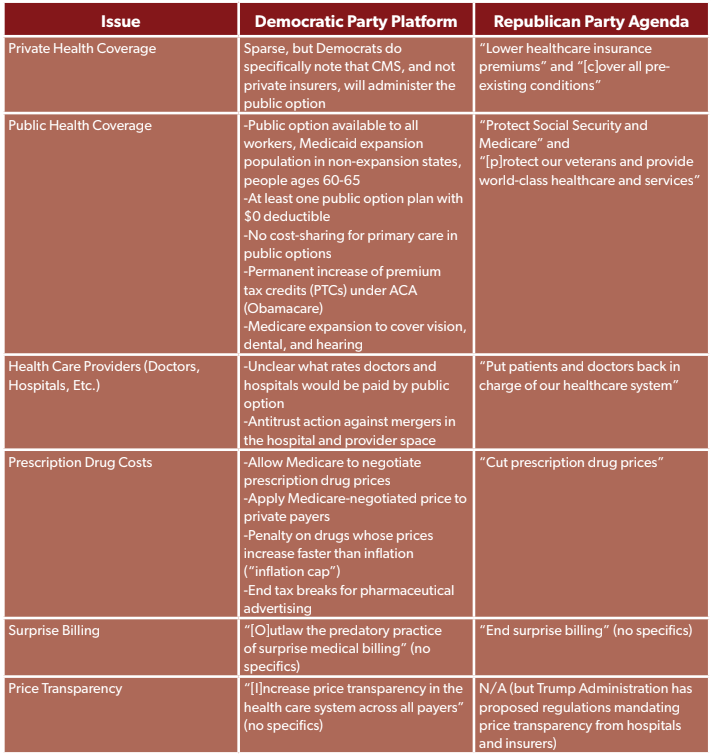 Democrats held their convention first this year, and published their platform at that time as well. The central plank of the Democratic Party health care platform is the creation of a public option on the Affordable Care Act (ACA, or Obamacare) marketplace, which would compete with private health insurers currently offering plans in marketplaces around the country:

The public option will provide at least one plan choice without deductibles; will be administered by CMS, not private companies; and will cover all primary care without any co-payments and control costs for other treatments by negotiating prices with doctors and hospitals, just like Medicare does on behalf of older people.

Around four million Americans who would otherwise be eligible for Medicaid in the 12 states that have not expanded Medicaid under the ACA would be automatically enrolled in the public option without premiums. Older adults could access the public option or Medicare starting at age 60 (rather than the current Medicare retirement age of 65).

More broadly, the platform tries to achieve the difficult balancing act of a nominee who opposes single-payer “Medicare for All” plans with a progressive faction of the party that insists such a policy is a necessity. How the party continues that balancing act if swept into power this fall is a key question with multi-trillion-dollar implications for taxpayers.

The platform includes several additional measures that NTU has opposed in the past, some of which have support from both the left and the right. This includes:

Other parts of the Democratic Party platform require more detail. The party claims it will “outlaw  the predatory practice of surprise medical billing,” but is silent on how to address inevitable payment disputes between plans and providers. The party says it will “increase price transparency in the health care system across all payers,” but does not point to specific ways it would so (such as the Trump administration’s recent proposed price transparency regulations). The party also threatens antitrust action against a series of health care sectors, including hospitals, insurers, and pharmaceutical manufacturers, but declines to call out specific mergers or acquisitions of concern.

Most importantly, the party declines to share how it will pay for the public option, PTC expansion, and Medicare expansion to cover dental, vision, and hearing, among numerous other health initiatives that will presumably require federal tax dollars. Prescription drug negotiation, an inflation cap, reduced paperwork for medical billing, and the elimination of tax breaks for prescription drug ads alone will not pay for this agenda, and the party owes taxpayers a fuller explanation of the tax-and-spend tradeoffs in their platform.

Unfortunately, the Republican Party agenda offers few details to work with. The party declined to enact a platform for 2020, kicking that work to 2024, and the Trump campaign’s recently released second-term agenda has seven very generic bullet-point items:

All seven of the above items read more like goals than policy proposals. Nonetheless, the following questions may be relevant to taxpayers:

Overall, the Trump campaign’s second-term health care agenda is lacking in details. The campaign and the Republican Party owe consumers and taxpayers fuller explanations. Fortunately, their allies in the Republican Study Committee and elsewhere are offering expansive, detailed platforms for the GOP. NTU also hopes some of the below alternatives can be adopted by one or both parties as they consider a governing agenda for 2021.

The following policy proposals are, in no particular order, among NTU’s most recent and consistent suggestions for policymakers. We believe members of both parties can support elements of this platform, and indeed several of the proposals below have attracted endorsements from both Republicans and Democrats in Congress.

In short, parts of both party agendas lack key details that will be crucial for the tens of millions of Americans with private health coverage and the taxpayers who support federal health programs. With the cost of health care rising, proposals to expand the federal government’s role in coverage and care demand detailed answers to tough questions from taxpayers. And while both platforms feature some laudable goals, such as ending surprise medical billing, a goal is not a policy proposal. Fortunately, months remain between now and Election Day, and candidates still have time to make a forceful and detailed case to voters.