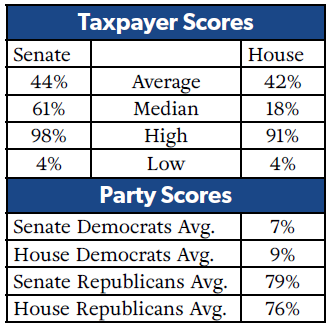 Every year National Taxpayers Union (NTU) rates U.S. Representatives and Senators on their actual votes—every vote that affects taxes, spending, and debt. Unlike most organizations that publish ratings, we refuse to play the “rating game” of focusing on only a handful of congressional votes on selected issues. The NTU voting study is the fairest and most accurate guide available on congressional spending.

NTU has no partisan ax to grind. All members of Congress are treated the same regardless of political affiliation. Our only constituency is the overburdened American taxpayer. Grades are given impartially, based on the Taxpayer Score.

The Taxpayer Score measures the strength of support for reducing wasteful government spending, opposing higher taxes, and often opposing burdensome regulations that can stifle U.S. economic growth. In general, a higher score is better because it means a member of Congress voted to spend less money.

The Taxpayer Score can range between zero and 100. We do not expect anyone to score a 100, nor has any legislator ever scored a perfect 100—without missing a single vote—in the decades-long history of the comprehensive NTU scoring system. A high score does not mean that the member of Congress was opposed to all spending or all programs. High-scoring members have indicated that they would vote for many programs if the amount of spending were lower or if the spending were offset by cuts elsewhere in the budget. Indeed, a member who still wants to increase spending on some programs can achieve a high score if he or she votes for offsetting cuts. A zero score would indicate that the member of Congress approved every spending increase and opposed every pro-taxpayer reform. 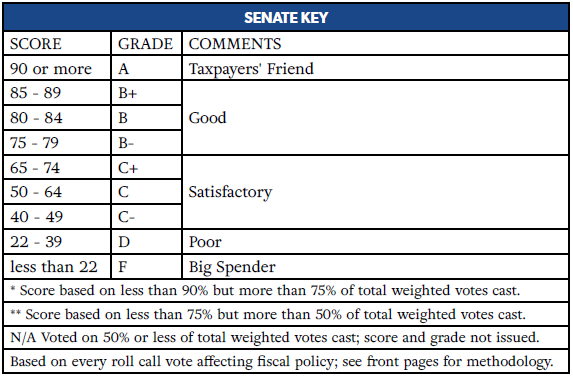 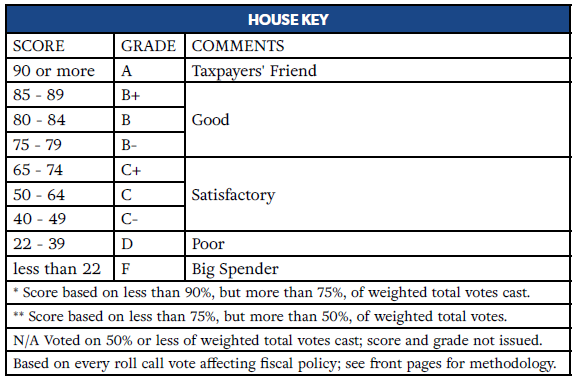