The "Medicare For All" Movement

The movement to enact a single-payer health insurance system in the United States is gaining steam. More than one-quarter of House members have signed on to H.R. 1384, the Medicare for All Act of 2019. This year’s Senate version of the legislation, long supported and sponsored by Sen. Bernie Sanders (I-VT), has 14 cosponsors, or more than one-quarter of the Senate Democratic Caucus. Several Democratic presidential candidates are on board with Medicare for All as well. The end of private insurance, and with it, the end of consumer choice in picking a health care plan, is a more popular position than it has ever been before.

However, with Americans reporting health care costs as a top concern - even for people covered through their employer - it’s not enough for policymakers opposed to single-payer to simply voice their opposition to “Medicare for All.” Advocates for a robust, competitive, and market-based health care system need to offer alternatives that expand consumer choice and access to affordable care.

Health savings accounts (HSAs) are one existing tool that can make health insurance more portable and more affordable for American workers and their families, while also putting more people in charge of their own health care decisions. In this Issue Brief, we’ll explain the current state of HSAs in the health insurance marketplace, consider the laws and policies that prevent increased utilization of HSAs by Americans, and offer several ideas to expand access to and promote the use of HSAs.

HSAs are triple tax-advantaged accounts intended exclusively to help Americans with high-deductible health plans (HDHPs) pay for certain qualified medical expenses. They are called triple tax-advantaged because: 1) the contributions to an individual’s HSA are not subject to income taxes (nor are their employer’s contributions, if their employer chooses to contribute to an HSA); 2) any earnings in the HSA are tax-free; and 3) any withdrawals from an HSA are tax-free as long as they are spent on qualified medical expenses.

What Are the Current Limitations on HSA Use?

There are limitations on who can open and contribute to an HSA. As mentioned, the individual has to be enrolled in an HDHP. This means:

There are also limitations on how much an individual, their employer, or a family member can contribute to their HSA in one year. In 2019, these limits are $3,500 for individual coverage and $7,000 for family coverage. Individuals 55 and over, but not yet enrolled in Medicare, are allowed to make additional “catch-up” contributions of $1,000 per year. The amount of money in an individual’s HSA rolls over from year to year, unlike flexible spending accounts (FSAs) that have rollover limits.

Of course, Americans are also limited in how they can spend money from their HSA. The definition of “qualified medical expenses” is quite expansive, and is outlined in full in by the IRS. There are a few important exceptions, though: HSA dollars cannot be spent on health insurance premiums (in most cases), nor on over-the-counter medications.

Health consulting group Devenir measures HSA use in a few different ways in their annual year-end report. According to their latest edition, from 2018, there were more than 25 million HSAs at the end of 2018, a 13 percent increase from the end of 2017.

Eight Ideas for Expanding and Promoting the Use of HSAs

The way HSAs are designed and restricted by law have limited their adoption and application by Americans. Fortunately, lawmakers have offered several bills that would accomplish one or more of several goals:

Below, we’ll review eight ideas for expanding access to and promoting the use of HSAs. Each idea accomplishes one or more of the goals outlined above.

Currently, an individual’s maximum allowable contribution to an HSA becomes $0 once they join Medicare. As noted in 26 USC 223(b)(7):

“The limitation under this subsection for any month with respect to an individual shall be zero for the first month such individual is entitled to benefits under title XVIII of the Social Security Act and for each month thereafter.”

A good start to expanding HSA use, and one with bipartisan potential, is legislation that allows individuals on Medicare to open and/or continue to contribute to an HSA. H.R. 603, S. 12, H.R. 3796, and H.R. 908 would each allow Medicare Part A beneficiaries to contribute to an HSA. While many of the proposals affecting HSAs in the 116th Congress have been introduced by Republicans, H.R. 3796, the Health Savings for Seniors Act, was introduced by Rep. Ami Bera (D-CA), a Democratic House member and a doctor.

Another provision in S. 12, Sen. Marco Rubio’s (R-FL) Health Savings Act of 2019, would expand HSA eligibility to individuals who receive medical items or services at a healthcare facility owned or leased by their employer.

An even more expansive proposal, and one featured in H.R. 603, H.R. 2163, and H.R. 3594, would be to simply remove the requirement that an individual needs to be enrolled in an HDHP to contribute to an HSA. By opening up HSAs to everyone, any American paying for health care could use tax-advantaged savings to cut down on their costs.

This provision would also combat some of the common arguments against HSAs. The Commonwealth Fund has written that HSAs “are far more attractive to higher-income individuals,” and that HSA “discount[s] will lead [high-income individuals] to increase their use of services, including unnecessary care, raising insurers’ costs and therefore premiums for everyone, at the expense of taxpayers in general.” Eliminating the HDHP requirement is just one way to increase HSA utilization. More modest measures, such as expanding the types of individuals allowed to contribute to an HSA, could also increase HSA utilization across income levels.

Considering that the average unsubsidized family health insurance premium in 2016 was $833 per month (or $9,996 per year), and that spending on non-durable medical products (which includes OTC medications) was $64.1 billion in 2017, these are two major categories where health care consumers in particular could benefit from using tax-advantaged HSA dollars. 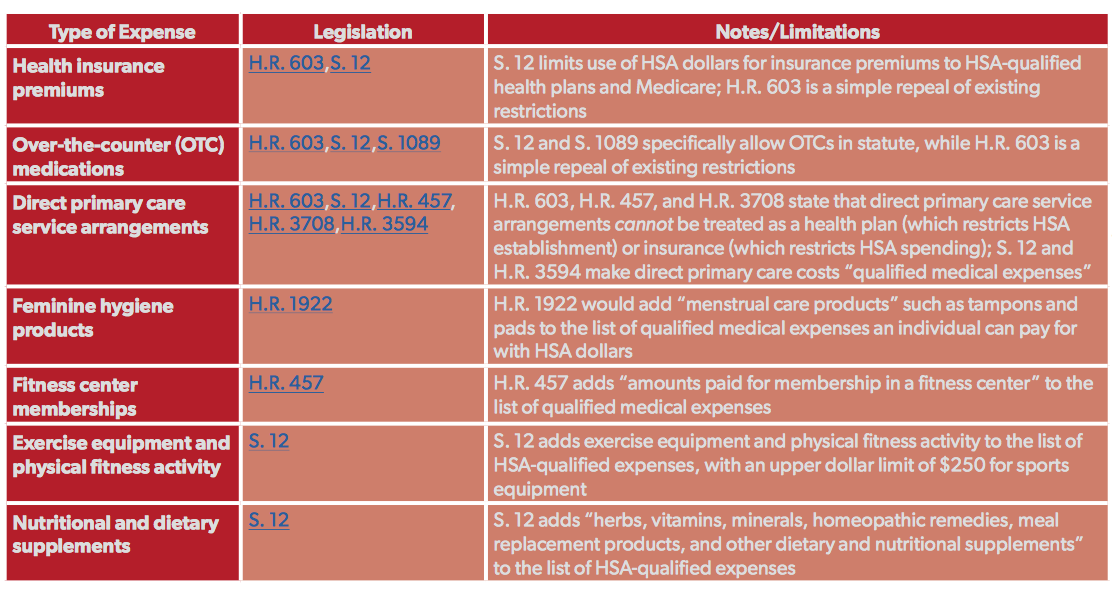 One flaw in existing HSA policy is the gap between the annual contribution limits for HSAs and the annual limit on out-of-pocket expenditures for HSA-eligible HDHPs. In 2019, that gap is $3,250 for individual plans ($6,750 out-of-pocket limit minus a $3,500 HSA contribution limit) and $6,500 for family plans ($13,500 out-of-pocket limit minus a $7,000 HSA contribution limit). Take someone with a family plan who starts the year with $0 in their HSA. That person could save the maximum amount to their HSA in a year ($7,000) and still be on the hook for an additional $6,500 of medical expenses that year, beyond the reach of their tax-advantaged HSA dollars.

Fortunately, several of the legislative proposals mentioned above would raise the annual contribution limits on HSAs and index them to inflation, allowing Americans to put even more money away for current and future medical expenses. Below is a chart of current-law annual limits on HSA contributions, and how various bills would change those limits.

The IRS explains in its guidance on HSAs that some family plans “have deductibles for both the family as a whole and for individual family members.” Unfortunately, this means that some consumers are shut out of opening up and contributing to an HSA, even if their family plan deductible exceeds the minimum required by law. The IRS offers an example (for 2018, when the minimum annual deductible was $1,350 for individual coverage and $2,700 for family coverage):

Legislation could clarify that an individual in a family plan who meets the minimum family deductible is eligible to open and contribute to an HSA, regardless of any individual deductibles within that family plan.

This proposal concerns the third requirement for HDHPs, that the plans can only provide preventive care before the deductible is met. One bipartisan piece of legislation introduced in the 115th Congress, sponsored by ex-Rep. Peter Roskam (R-IL) and cosponsored by Rep. Mike Thompson (D-CA) and ex-Rep. Diane Black (R-TN), would have allowed individual plans to cover up to $250 of non-preventive services ($500 for family plans) before the deductible and still be HSA-eligible.

The Trump administration could also be open to supporting such a proposal. The IRS recently expanded the list of items or services that count as preventive care in an HSA-eligible HDHP.

As Medicare For All gains steam among a certain set of progressive policymakers, it’s important to offer alternatives that would actually lower costs and expand choice for American consumers.  Expanding and accelerating the use of health savings accounts (HSAs) is the best way to counteract proposals that call for a more aggressive government role in health insurance. HSAs are not a silver-bullet solution to legitimate concerns about rising health care costs. However, they are popular with millions of Americans now, and could present a tax-free way of saving on future health care costs for millions more. Members of Congress from both sides of the aisle should consider all eight ideas above, and hold votes on either existing HSA legislation or future legislation that incorporates them in some fashion.