Unfortunately, this new legislation – the America COMPETES Act of 2022 – is 2,912 pages of more federal spending and more government bureaucracy that is unlikely to provide immediate solutions to semiconductor shortages. The massive bill also includes tens of billions of dollars in spending that is not directly related to semiconductor (or ‘chip’) issues at all.[1]

Much of the reporting surrounding the House bill (and the Senate’s effort) thus far focuses on roughly $50 billion in funding to boost semiconductor manufacturing and research and development (R&D) in the U.S. The Senate bill mentioned above – the U.S. Innovation and Competition Act (USICA) – includes around $50 billion in funding for grants, research, manufacturing programs, and other initiatives aimed at reducing U.S. reliance on foreign manufacturers and foreign supply chains for chips. The Senate bill, however, amounted to $250 billion in new spending. NTU urged a “no” vote on the bill, and NTU Foundation criticized the legislation’s corporate subsidies and reliance on borrowing (i.e., more federal debt).

NTU’s initial analysis of the America COMPETES Act is that it is an even larger grab bag of federal spending than USICA, without any meaningful spending offsets.[2] Based on our analysis of the bill text and section-by-section, the America COMPETES Act likely authorizes around $318 billion in new spending over the next 10 years.[3] Most of that spending is authorized for the next five fiscal years (FYs 2022-26) alone. 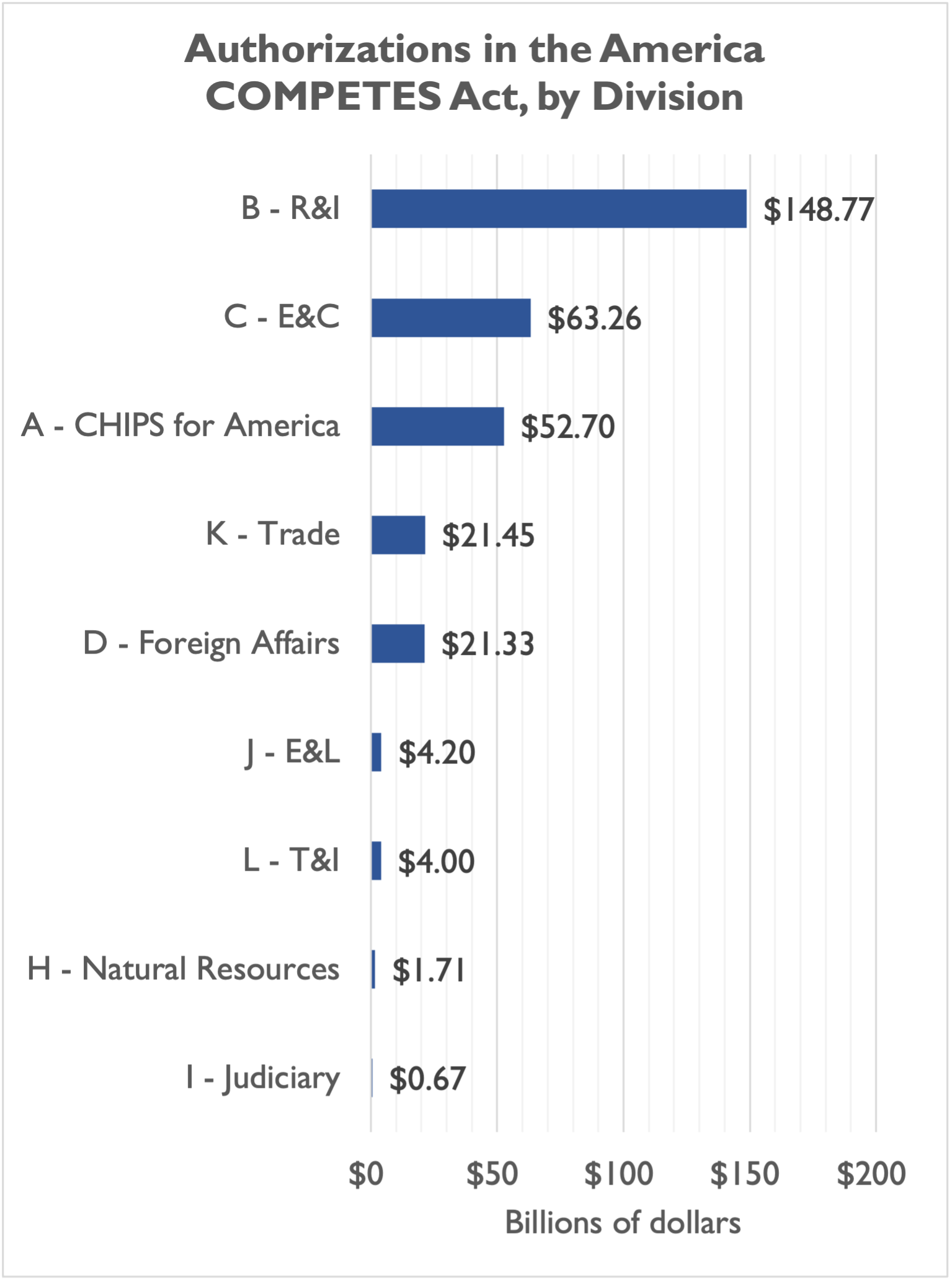 As noted above, there appear to be no major pay-fors in the legislation, which means that lawmakers who vote for America COMPETES are likely voting to authorize hundreds of billions of dollars of new debt for the federal government at a time when America’s taxpayers are already on the hook for $5.1 trillion in COVID-related spending and more than $28 trillion in overall debt.

And Congress may not be finished with this kind of spending after 2022. One statistic of concern is that the headline chips spending in the package – under Division A of America COMPETES – is heavily frontloaded, with nearly half of the spending in the division ($24.5 billion out of $52.7 billion, or 46.5 percent) authorized for the current fiscal year, FY 2022.[5]

One could imagine a scenario where federal agencies and their grantees burn through $24.5 billion fast, are left unsatisfied with the average of $7 billion per year in chips spending in FYs 2023-26, and ask Congress for more funding. 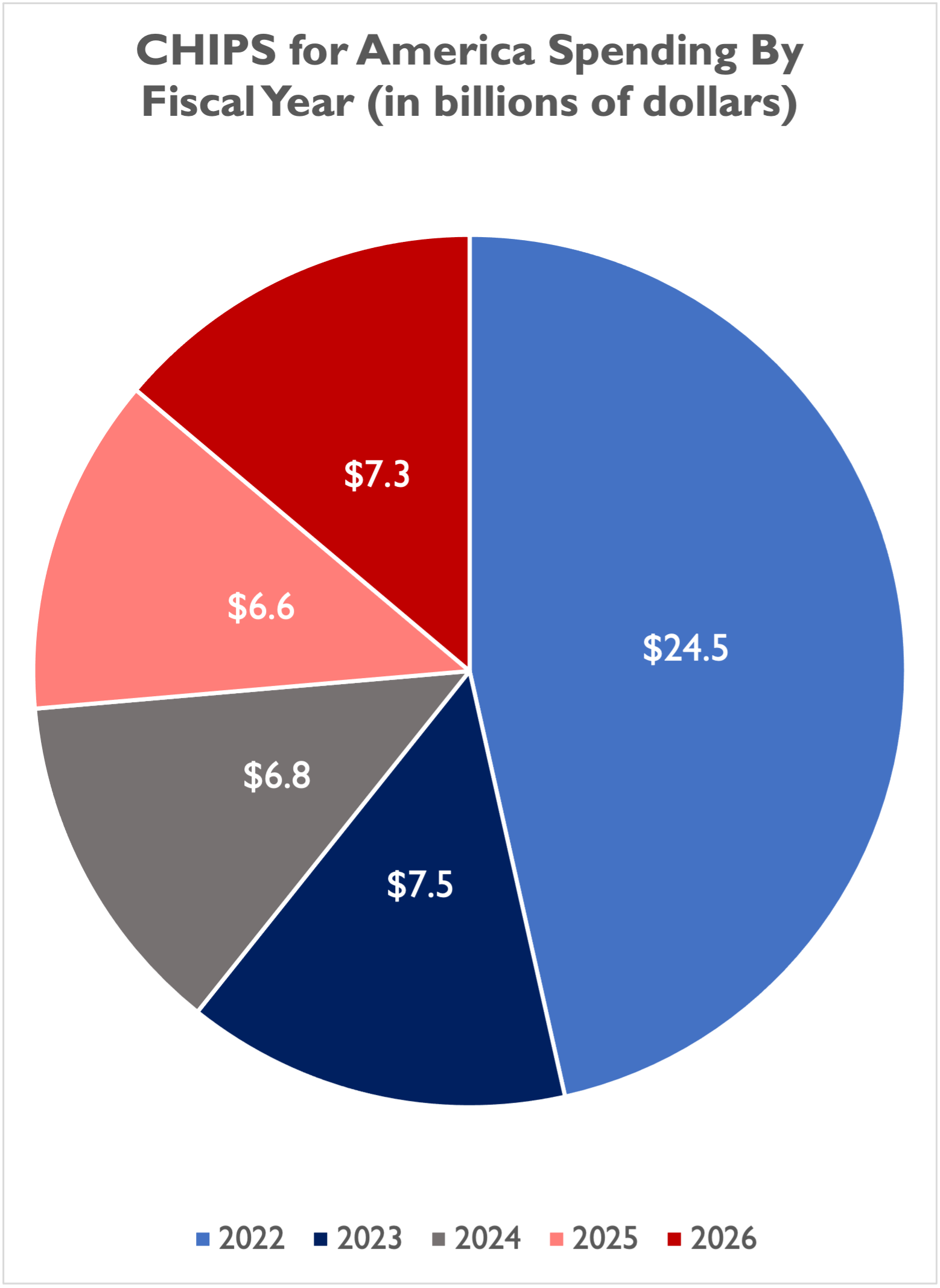 The largest single division of the legislation – Division B, Research and Innovation – includes several new and expensive authorizations (or reauthorizations) for a number of programs at the Department of Energy, including $15 billion for “basic energy sciences,” $6.6 billion for computer science research, $4.8 billion for Earth and environmental systems science, $5.3 billion for fusion energy research, $7.9 billion for “high energy physics,” and $5 billion for nuclear physics.

Division B also reauthorizes funding for the National Institute of Standards and Technology (NIST) and the National Science Foundation (NSF), with annual increases to each agency’s budget well above the expected pace of inflation.

Title II of Division B would authorize increased NIST funding each year until FY 2026, when authorization levels would be $1.765 billion. This is 71 percent higher than the discretionary spending approved for NIST in FY 2021 ($1.034 billion).

Title III of Division B would authorize increased NSF funding each year until FY 2026, when authorization levels would be $17.939 billion. This is more than double the amount of discretionary spending approved for NSF in FY 2021 ($8.487 billion), or more than 100-percent budget growth in six years.

Each of these budget boosts, to NIST and NSF, would likely increase spending beyond FY 2026 too, since the aggressive spending increases would create new baselines for the agencies to build off of in FY 2027 and beyond.

As noted above, the America COMPETES Act also includes billions of dollars in spending that seem wholly unrelated to the semiconductor issue, even though this legislation is being sold as a semiconductor bill. Unrelated spending authorizations include:

Finally, lawmakers have also managed to jam in several policy bills that are unrelated to the chips shortage but are attempting to hitch a ride on this massive spending legislation anyway. Policy attachments include the SHOP Safe Act and the Merger Filing Fee Modernization Act – each of which NTU has opposed before – a provision requiring vaccines donated by America to be “clearly branded with the U.S. flag,” and an entire title asking U.S. agencies to buy U.S.-caught and -harvested seafood before they turn to seafood imports from abroad.

Overall, the America COMPETES Act appears to be a grab bag of wasteful spending, more debt, questionable corporate subsidies, and bad public policies (much of which is unrelated to the underlying chips shortage). Congress should reject this legislation, and instead look to regulatory reform and free trade to alleviate chip shortages in the short and long run.

[1] We use “semiconductors” and “chips” interchangeably in this piece.

[2] There is no indication that America COMPETES reduces spending elsewhere in the federal budget or increases taxes to offset new authorized spending. The bill raises merger filing fees, though the increased filing fees are intended to offset increased enforcement spending at the FTC and the DOJ. It also reduces the de minimis threshold for tariff exemptions, a provision whose effects are yet to be determined.

[3] We may update our analysis in the future based on the Congressional Budget Office’s (CBO) estimate of the spending and deficit impacts of America COMPETES.

[4] An important budgetary note: authorizations for new spending are not the same as appropriations for new spending. Even if Congress were to pass America COMPETES into law, lawmakers would have to then appropriate taxpayer funds up to the amounts authorized in America COMPETES. Authorization is a green-light for Congress to appropriate funding in certain amounts for certain purposes, whereas the appropriations process actually provides those funds to federal agencies, grantees, loan recipients, etc.

[5] There is $2 billion in authorized spending for “mature technology nodes” under Division A (Sec. 10002) that is not pegged to a specific fiscal year. We assigned this spending to FY 2022 for purposes of this analysis.