On behalf of National Taxpayers Union (NTU), the nation’s oldest taxpayer advocacy organization, I write with NTU’s views on the important Subcommittee hearing you are holding today regarding “Taxpayer Fairness Across the IRS.”[1] As an organization that has fought alongside Members of Congress and Presidents of both parties to expand taxpayer rights and due process for over 50 years, we hope our research and reform recommendations are helpful to you and your colleagues as you consider the future of the Internal Revenue Service (IRS), its budget, and its practices in the months ahead.

The May 17 Government Accountability Office (GAO) report from James R. McTigue, Jr. that accompanies this hearing is an important contribution to ongoing legislative branch discussions of IRS audits and enforcement activities.[2] GAO’s research and conclusions should give Members of Congress considerable pause when considering proposals that would vastly increase the IRS enforcement budget, or significantly expand the scope and scale of IRS monitoring and enforcement.

While President Biden and other policymakers claimed this IRS budget increase would yield around $700 billion in tax revenue for the government[5] – an incredible $8.75 return for every $1 invested – subsequent analysis from the nonpartisan Congressional Budget Office (CBO) determined that the return on investment was closer to $2.59 for every $1 invested, or less than 30 percent of the Biden administration’s estimates.[6]

NTU and NTU Foundation put out research and analysis throughout last year that called into question 1) White House and lawmaker proposals for additional IRS enforcement funding and 2) additional tax reporting burdens on American individuals and businesses.[7] In particular, we often raised concerns about how additional enforcement – and new information reporting requirements affecting Americans’ financial accounts – could have a pernicious impact on low- and middle-income households.

“While tax cheats are the focus of the proposal[s], there are lots of cases where taxpayers and the IRS disagree over the nature of financial transactions and how they should be treated under tax law. Due to the complexity of the tax code and respective business or accounting arrangements of certain taxpayers, many filers get mired in audits, investigations, and legal cases over the proper interpretation of financial arrangements under the law. … These cases can be drawn out for years.”[8]

“All told, based on these numbers it’s likely that somewhere in the realm of 60-70 million Americans would be affected by the IRS’s reporting requirements. Though the Biden Administration has pitched their proposals as targeting the wealthiest Americans, those making over $400,000 per year, only about 2.8 million taxpayers fall under that category. By any measure, IRS reporting requirements would rope in far more than that.”[9]

And, writing on claimants for the Earned Income Tax Credit (EITC) specifically in February 2022, Wilford noted:

“It’s naive to imagine that any increase in financial disclosure or enforcement funding would reduce the number of audits that low-income taxpayers face. Refundable credits are prone to abuse and even honest mistakes, and more enforcement capacity would only empower the IRS to seek out more improper payments.”[10]

Much attention has been paid on Capitol Hill[11] and in the media[12] to the difference in audit rates between wealthy taxpayers and low-income taxpayers. Democrats on the House Committee on the Budget claimed in late 2020 that “[t]he burden of painful tax audits has shifted unfairly onto lower-income people who work for a living.”[13] These claims deserve further scrutiny.

According to IRS data, audit rates on EITC returns were, indeed, higher than the audit rate for all individual returns from tax years 2010 through 2018.[14] 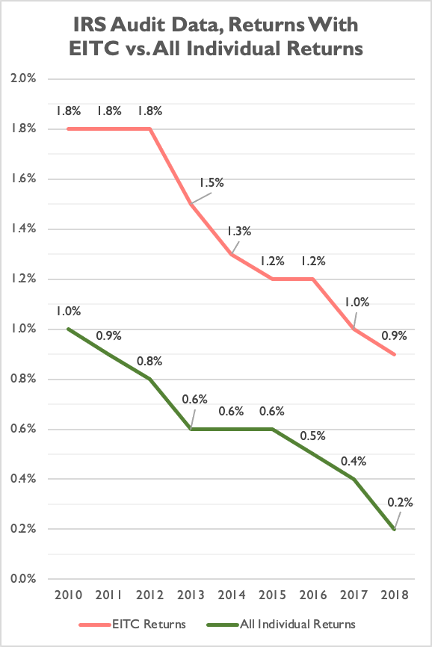 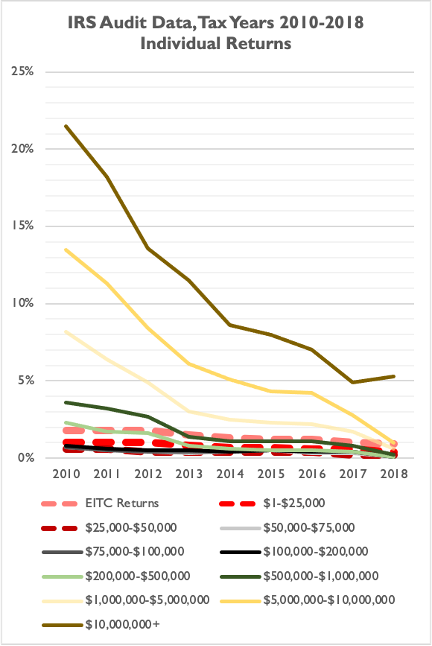 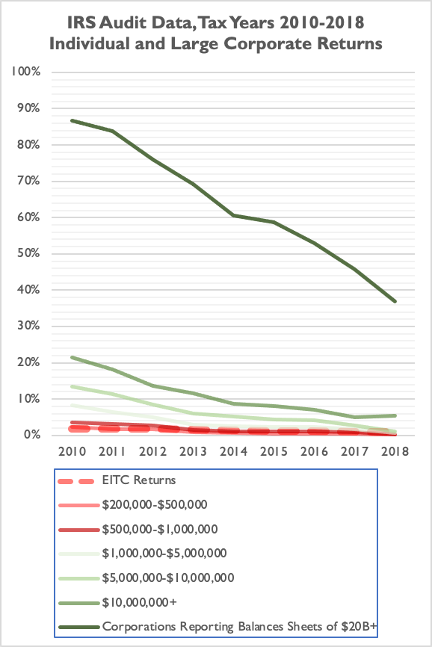 Of greater concern to lawmakers should be that the IRS appears to audit far more EITC claimants than they help through the Taxpayer Advocate Service (TAS) each year. That trend is mirrored by TAS assistance to all taxpayers, when compared to the amount of individual taxpayers audited by the IRS in a given year.[15] While measures of post-filing assistance are not a perfect proxy for how many EITC claimants turn to the agency for help, the data do demonstrate that only a fraction of the EITC claimants being audited each year are receiving assistance from TAS. 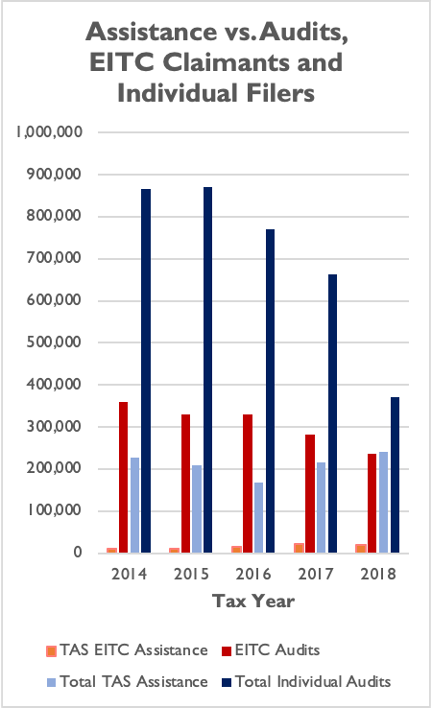 The IRS has recently asked lawmakers to grant it significant amounts of additional funding[16] and has complained about a lack of resources,[17] but the agency’s actions and decision-making should lead lawmakers to prioritize exercising significant oversight over any additional agency funding and bolstering taxpayer rights as a hedge against additional abuse.

While EITC audit rates have fallen over the past five years along with audit rates for all individuals, the proportion of total individual audits by the IRS with an EITC claim has risen dramatically from 42 percent to 64 percent.[18] This could suggest that, as the IRS has become more resource-constrained, it has stepped up the proportion of enforcement activity it devotes to EITC claimants. This could also be due to the IRS devoting more of its resources to correspondence audits, rather than in-person audits — a disproportionate portion of EITC audits are conducted through IRS correspondence.

Or, as GAO writes in its report:

“Audits of the lowest-income taxpayers, particularly those claiming the EITC, resulted in higher amounts of recommended additional tax per audit hour compared to all income groups except for the highest-income taxpayers. IRS officials explained that EITC audits are primarily pre-refund audits and are conducted through correspondence, requiring less time. Also, lower-income audits tend to have a higher rate of change to taxes owed.”[19]

And later in its report:

“Our analysis for fiscal years 2010 through 2021 found that audits of taxpayers claiming the EITC generally had similar average recommended additional taxes per audit hour compared to audits of incomes from $5 million to less than $10 million.”[20]

Suppose Congress were to provide the IRS with substantial new resources for tax enforcement, including funding and reams of new taxpayer information from financial institutions, with a mandate from Congress to aggressively pursue additional revenue to pay for new spending. In this case, taxpayers would be right to ask: would the agency first direct their efforts at expensive, time-consuming in-person audits of wealthy taxpayers and corporations, potentially facing legal challenges in the process, or would the IRS devote its time and manpower to additional correspondence audits from under-resourced low- and middle-income taxpayers?

Without Congressional oversight, recent history suggests the agency would pursue enforcement against low-income taxpayers with particular zeal. These audits can be incredibly time-consuming for taxpayers. For example, according to the National Taxpayer Advocate (NTA), in fiscal year (FY) 2021 “it took an average of 340 days for the IRS to complete an audit of a taxpayer whose income was less than $50,000.”[21]

Meanwhile, IRS customer service that could assist EITC claimants, as well as other low- and middle-income taxpayers, has atrophied during the pandemic. Skyrocketing phone call volumes have left millions of taxpayers on hold with the agency, their issues unresolved — just 11 percent of the 282 million phone calls the IRS received in FY 2021. Meanwhile, the popular “Where’s My Refund” online application, despite surging page views from taxpayers in recent years, remains an inadequate tool that cannot solve major taxpayer concerns.[22] 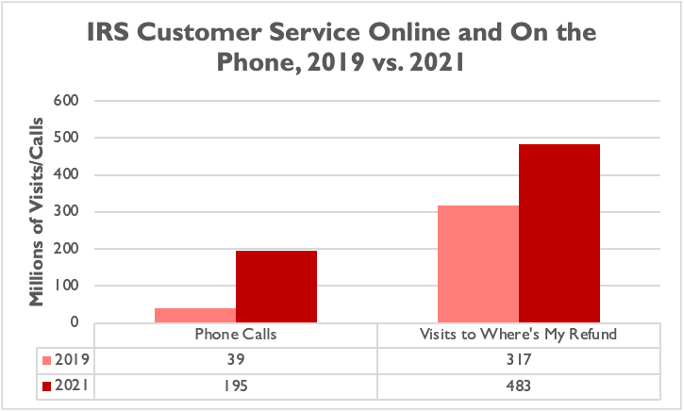 Meanwhile, the agency’s paper correspondence backlog has grown – which may have contributed to an IRS management decision to destroy 30 million paper records in 2021[23] – and in-person correspondence has plummeted due in large part to the pandemic.[24] 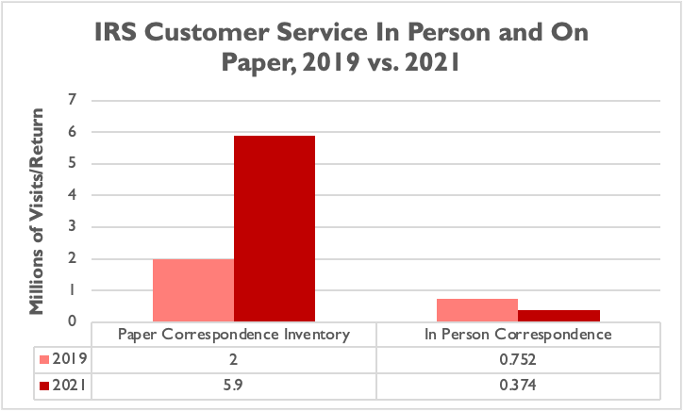 NTU encourages this Subcommittee to do the following, as they consider options to increase taxpayer fairness across the IRS:

This is but a topline overview of recommendations from NTU and NTU Foundation for a better, more effective IRS. The issue briefs and policy papers cited in the footnotes provide significantly more detail. Should you have any questions or feedback on our work please do not hesitate to contact me at alautz@ntu.org.

CC:      Members of the House Ways and Means Subcommittee on Oversight

[1] House Ways and Means Committee. “Oversight Subcommittee Hearing on Taxpayer Fairness Across the IRS.” May 18, 2022. Retrieved from: https://waysandmeans.house.gov/legislation/hearings/oversight-subcommittee-hearing-taxpayer-fairness-across-irs (Accessed May 17, 2022.)

[10] Wilford, Andrew. “IRS Scrutiny Is Not Only a Concern for Tax Evaders.” February 16, 2022, NTU Foundation. Retrieved from: https://www.ntu.org/foundation/detail/irs-scrutiny-is-not-only-a-concern-for-tax-evaders

[11] House Committee on the Budget. “Funding the IRS Pays Off: Preventing Tax Dodging by Wealthy Filers Is the First Step to Fixing Our Tax Code.” October 1, 2020. Retrieved from: https://budget.house.gov/publications/report/funding-irs (Accessed May 17, 2022.)

[14] Data retrieved from: IRS. “Compliance Presence.” Updated April 12, 2022. Retrieved from: https://www.irs.gov/statistics/compliance-presence (Accessed May 17, 2022.); Note: NTU created visual representations of IRS audit rates based on publicly available agency data. These data may differ from GAO data, in part because the IRS is working with more up-to-date data than NTU has analyzed here. For example, audit rates for the prior three years may increase because the “IRS can include returns filed within the last 3 years in an audit … [and] within this 3-year period, the audit rate will increase as additional returns are selected for audit.” For more see: McTigue Jr., James R., supra note 2, at page 11 (footnote 16).

[17] IRS. “Written Testimony of Charles P. Rettig, Commissioner Internal Revenue Service before the Senate Finance Committee on the Filing Season and the IRS Budget.” April 7, 2022. Retrieved from: https://www.irs.gov/newsroom/written-testimony-of-charles-p-rettig-commissioner-internal-revenue-service-before-the-senate-finance-committee-on-the-filing-season-and-the-irs-budget (Accessed May 17, 2022.

[23] Bishop-Henchman, Joe. “Why Did the IRS Destroy 30 Million Paper Records Before Processing Them?” NTU Foundation, May 10, 2022. Retrieved from: https://www.ntu.org/foundation/detail/why-did-the-irs-destroy-30-million-paper-records-before-processing-them