Founded in 1969, National Taxpayers Union (NTU) is the oldest taxpayer group in the United States. We serve as the “Voice of America’s Taxpayers” and strive to represent their best interests before governments at all levels. NTU has a long history of opposing costly tariffs that drive up prices and weaken the U.S. economy. Thank you for the opportunity to comment on possible new taxes on imported vehicles and parts.

Although the Commerce Department has not yet completed its investigation, according to many reports the Administration is considering a 25 percent tax on imported vehicles and parts. Based on 2017 import volume, a 25 percent tariff could roughly triple total U.S. import taxes to the highest level in history. 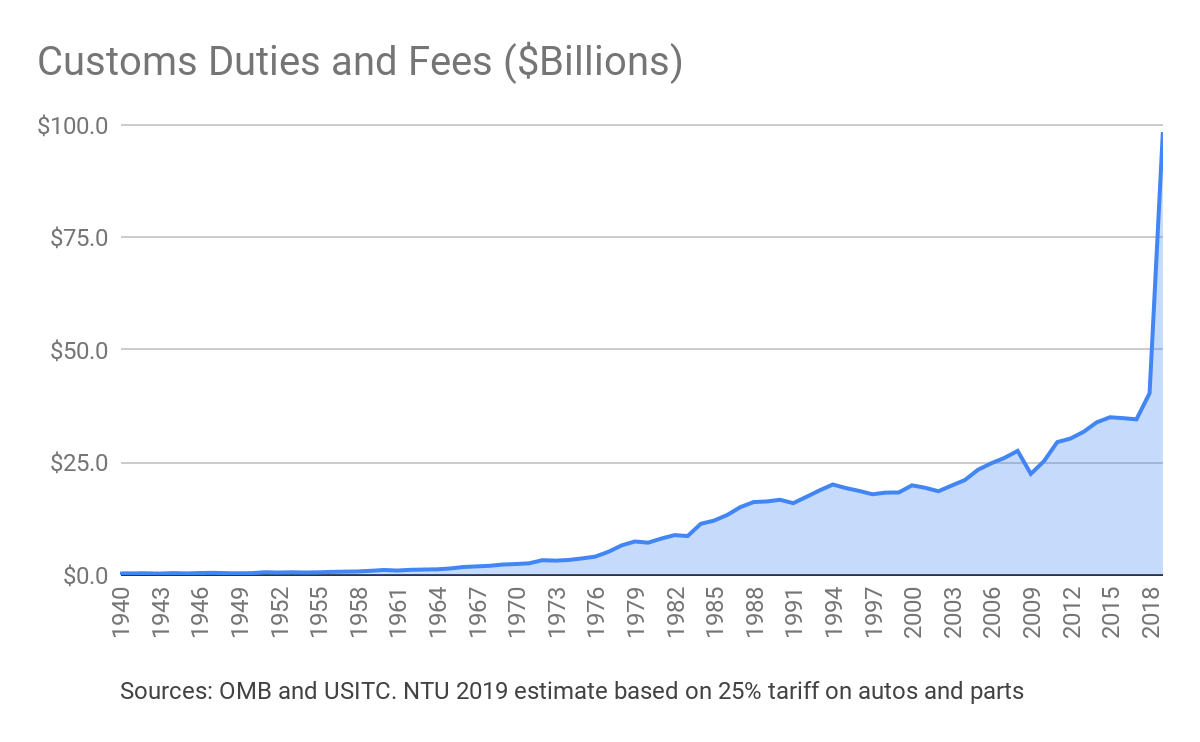 The price of U.S.-assembled vehicles would also increase due to higher costs for imported parts combined with the increased prices consumers would face for imported vehicles.

In addition to driving up prices on imported cars and pickup trucks, these tariffs would increase prices on cars and trucks manufactured in the United States. Cars assembled domestically would see price increases of at least $1,262, and the total impact of these tariffs would amount to a federal tax increase on all Americans of over $65 billion.

There is overwhelming evidence that U.S. trade barriers weaken our internal economy. A 1983 Section 232 investigation conducted in the midst of the Cold War with the Soviet Union included this comment from the Council of Economic Advisers:

Trade restrictions impose hidden costs on the economy. They are not included in the appropriations of elected officials, they show up on no agency’s budget, and they tend to be overlooked when assessing the impact of the broader policy of which they are a part. But hidden or not, these costs act as a drag on the rest of the economy, eroding the industrial base in other sectors, and undermining our ability to sustain a balanced defense effort in a national emergency. (emphasis added)

Although the Cold War is over, the logic still applies. Tripling U.S. import taxes and increasing the price of vehicles and parts would leave Americans with less money to spend and invest elsewhere, weakening our internal economy.

This view is nearly universally accepted by economic experts. Earlier this year, NTU released a letter signed by more than 1,100 U.S. economists, including 15 Nobel laureates. They wrote:

We are convinced that increased protective duties would be a mistake. They would operate, in general, to increase the prices which domestic consumers would have to pay. A higher level of protection would raise the cost of living and injure the great majority of our citizens.

Our export trade, in general, would suffer. Countries cannot permanently buy from us unless they are permitted to sell to us, and the more we restrict the importation of goods from them by means of ever higher tariffs the more we reduce the possibility of our exporting to them. Such action would inevitably provoke other countries to pay us back in kind by levying retaliatory duties against our goods.

In general, countries that have remained open to trade, that haven't erected barriers including tariffs, have grown faster, they have higher incomes, higher productivity. Countries that have gone in a more protectionist direction have done worse. I think that's the empirical result.

For these reasons we encourage the Commerce Department to consider the impact of trade and potential tariffs on the entire U.S. economy in its investigation, including a complete economy-wide cost-benefit analysis, and to make all of these findings available to the public.

The economists who signed NTU’s letter to President Trump and Congress concluded: “Finally, we would urge our government to consider the bitterness which a policy of higher tariffs would inevitably inject into our international relations. A tariff war does not furnish good soil for the growth of world peace.”

Previous Section 232 investigations acknowledged the benefits that trade with our allies generates for U.S. national security. In one case, the State Department reported that our major foreign suppliers were politically reliable, an indication that their exports to us would not be interrupted in time of conflict.

In another investigation, the Commerce Department observed: “The U.S. has long been a champion of a free international trading system, because such a system promotes the economic well being of the American people and that of our trading partners -- the most important of which are also U.S. allies.”

Many studies have been conducted on the relationship between trade and peace. One recent report concluded: “... trade alliances give other states more of an incentive to defend allies that come under attack. That line of thinking seems to play out in the data. As the models predict, countries are less likely to be at war with their trading partners, and countries with more trading partners are less likely to go to war in the first place.”

Nearly every person you hear from today will urge against the imposition of new tariffs. More than 98 percent of the 2,256 public comments submitted in response to the Commerce Department’s request also were in opposition to the imposition of new tariffs. These comments have come to you from small business owners, from hobbyists, from trade associations, from economists and more. These are real Americans, in the heartland of America, who will be hurt by new tariffs and are asking you not to move forward with them.

Please give their input serious consideration. New tariffs would weaken the internal U.S. economy at a time when other countries around the world are strengthening their economies by reducing barriers to automobile trade.