In response to widespread inflation and rising gas prices, House Democrats plan to consider legislation in mid-May that would empower the President to declare energy emergencies and the Federal Trade Commission (FTC) to enforce against “excessive” increases in gas prices. Unfortunately the “Consumer Fuel Price Gouging Prevention Act,” as the legislation is called, fails to define what constitutes an “excessive” or “unconscionable” price increase and fails to place limits on the President’s ability to declare energy emergencies for indefinite periods. The negative consequences of this legislation for consumers, taxpayers, and the exercise of federal government power could be far-reaching, in the short term and the long run.

The Problem in Context

Rising gas prices are indeed a problem weighing on American voters’ minds. According to a recent Center Square report that covered (paywalled) Rasmussen polling, “82% of surveyed likely American voters are concerned about the rise of gasoline and energy costs.”=

The Energy Information Administration (EIA) tracks weekly gas price averages in the U.S. As of May 9, the average gas price was nearly $4.33 per gallon, which is a staggering 46 percent (or $1.37 per gallon) more than the price at this time last year. Gas prices fell from mid-March to mid-April, but have risen $0.26 per gallon (6.4 percent) in the past three weeks. 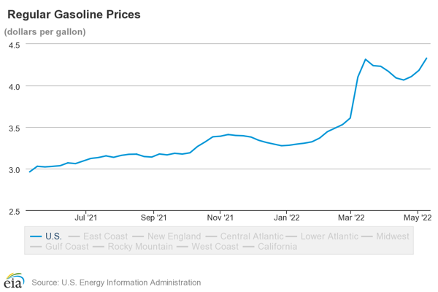 Progressive lawmakers such as Sen. Elizabeth Warren (D-MA) and Sen. Bernie Sanders (I-VT), as well as Democratic Congressional leadership including Speaker Nancy Pelosi (D-CA) and Senate Majority Leader Chuck Schumer (D-NY), have blamed “big oil” companies, with many of them claiming these companies are “profiteering” off inflation and the volatility sparked by Russia’s invasion of Ukraine.

As is often the case with politicians’ statements, the situation is more complicated than that. EIA points out that less than 60 percent of the price paid for a gallon of gas actually comes from the price paid by downstream sources for crude oil. Nearly one in every five cents for a gallon of gas goes to refining, around one in every eight cents goes to distribution and marketing, and an additional one in eight cents goes to federal and state taxes. 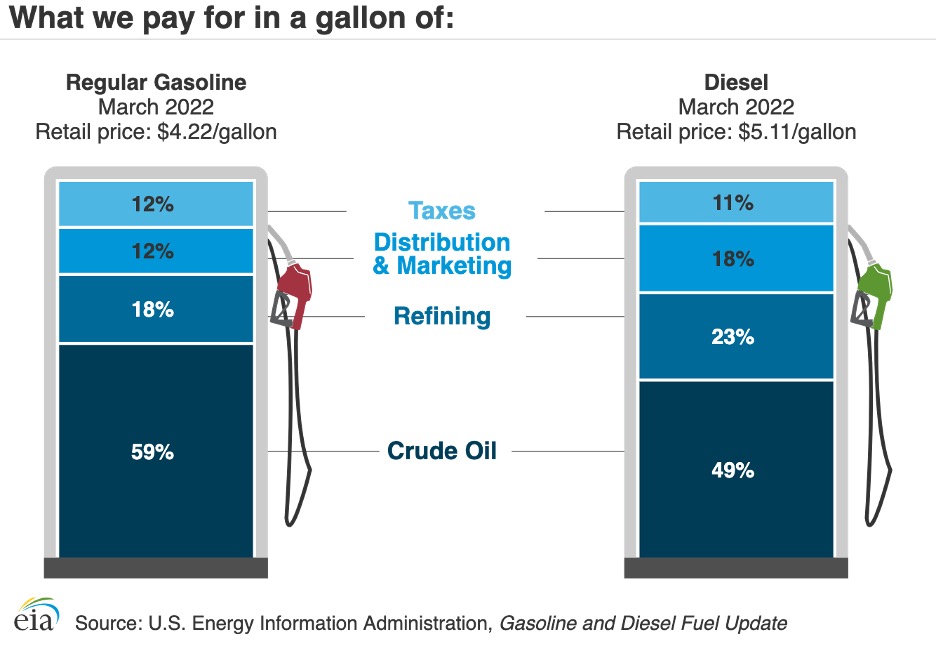 There are also important reasons that oil and gas prices don’t always move perfectly in tandem, as explained in this excellent thread by Dallas Federal Reserve energy economist Garrett Golding:

"Oil prices are down, so why aren't gas prices?"

This question is all over the place right now. Unfortunately there is a lot of misinformation and half-truths being spread in response. Most of my [few] followers are experts, but this thread is for those who are not. 1/

This brings us to the legislation the House will consider the week of May 16, the Consumer Fuel Price Gouging Prevention Act.

The key provision of the legislation is that it makes it illegal for companies to sell gas – at the wholesale or retail level – at an “unconscionably excessive” or ‘exploitative’ price, so long as the President has declared an energy emergency for a particular gas or fuel product in a particular area of the U.S. However, the legislation:

The only loose peg for an “aggravating factor” in whether there has been an “unconscionable” price increase is the average gas price in the “30-day period before the date on which the proclamation was issued.” This is a messy peg at best, given gas prices are notoriously volatile and can swing wildly in 30-day periods of time. Otherwise, the bill gives the Federal Trade Commission (FTC) carte blanche to determine any other “appropriate benchmark” for “unconscionable” price increases.

Indeed, with this legislation it appears Congress is punting most of the difficult questions to the President and the FTC.

The President has virtually no limits or brakes on their ability to issue “energy emergency” proclamations:

Lawmakers would be short-sighted to grant President Biden and all future Presidents this sweeping authority. What’s to prevent the current or a future President, of either party, from declaring an energy emergency in an attempt to artificially hold down gas prices for an open-ended period of time? This could even occur in the leadup to a re-election effort by the President, or a midterm election, in an effort to benefit the President and their political party.

However, a future president is not the only politician who would be able to wield expanded authority under this legislation.

The bill also allows state Attorneys General (AGs) to enforce the bill at the retail level. This is a recipe for abuse. High prices at the pump can galvanize voters, and politicians who want to be re-elected would have a new weapon to use to artificially keep gas prices low.

High gas prices are not only reflective of the costs of production, transportation, and sales, but also the regulatory and tax treatment of these products. For example, could a state increase their gas tax, which would be a cost likely passed along to the consumer, and then use this federal legislation to claim the oil and gas retailers are charging consumers unfairly? The bill could act as a get-out-of-jail-free card for states that have less friendly regulatory or tax treatments for oil and gas companies.

The legislation could also be wielded in response to natural disasters. Hurricane Katrina’s devastation led to high gas prices as it disrupted oil productions. Gas prices increased in response to these disruptions, hitting certain parts of the country especially hard. Events like these are unfortunate, but the price increases are often reflective of the economic landscape. However, under this legislation, State AGs could go after gas retailers for higher prices.

What can an energy company do if they are deemed to be in violation of this legislation? Not much.

The only recourse for oil and gas companies deemed to be in violation of this legislation is to argue before the FTC that the prices charged reasonably reflect additional costs incurred or risks taken by the company. Rather than the government proving its case, the burden of proof instead rests with energy companies to prove that they are innocent of ill-defined ‘price gouging.’ This onerous standard, coupled with the startling lack of clarity in the bill, would be an immense bar to reach, especially in front of a potentially hostile FTC.

The FTC has already been pressured by top Democrats to go after oil and gas companies. President Biden wrote a letter to FTC Chair Lina Khan urging the agency to investigate anti-consumer practices by gas companies. In response, the FTC announced it would step up enforcement on oil and gas companies' apparent collusion. Senator Elizabeth Warren (D-MA) and other Democrats have also introduced legislation that would empower the FTC to ban “unconscionably excessive” prices.

The legislation gives huge leeway to the FTC to shoot down any affirmative defense from oil and gas companies and ignore rational economics in the process. In determining if a company is in violation of this bill, the factors considered include whether the change in average costs “grossly” exceeds the costs in the 30-day period before the energy emergency or “another appropriate benchmark period” set by the Commission. Essentially, this would grant the FTC blank check authority to cherry-pick dates to compare and argue that the increases in prices are unreasonably excessive.

The prospects of oil and gas companies successfully arguing their case before the FTC seem extremely small. An affirmative defense is already difficult; the additional flexibility this legislation provides for federal agencies significantly tilts the scales in favor of the government.

A better approach from Congress in the short run would cover ground on at least three major fronts:

In the long run, Congress should:

Even as a messaging bill, which this legislation likely is, it still is head scratching. As NTU Executive Vice President Brandon Arnold explains, President Biden has blamed the pandemic and Putin for the problems Americans are facing at the pump. Apparently, it’s also the fault of private companies now too. It’s certainly a confusing message that the party in control of Washington is powerless to facilitate changes to help consumers. Unfortunately, the message this legislation sends to consumers worried about high gas prices is that politicians in Washington would rather play the blame game than take meaningful action to address the problem.

Rather than waste time with point-scoring, policymakers should examine the short- and long-term solutions outlined above. Consumers are unlikely to be assisted by this poorly crafted legislation, and would be better served by thoughtful and pragmatic solutions. Unfortunately, this legislation offers neither.