President Biden has released his fiscal year (FY) 2023 budget request, and his initial proposals are not promising for taxpayers concerned about the nation’s fiscal trajectory. Though the Biden White House has trumpeted deficit reduction in its communications about the budget request – and proposed tax increases targeted at “billionaires and large corporations” – a closer look finds the proposal is full of increased federal spending, tax increases that have the potential to damage the U.S. economy, and not nearly enough bold action on deficit and debt reduction.

The President’s budget request would increase discretionary spending – the 30 percent or so of federal government spending that requires annual Congressional appropriations – in nearly every category, boosting federal agency budgets without corresponding spending cuts elsewhere in the government. The Department of Defense (DoD) has the largest discretionary budget of any federal agency by a wide margin, and NTU is concerned about the Biden administration’s huge proposed increases to DoD spending. For easier comparison’s sake, though, see the administration’s proposed increases to other federal agency budgets, in dark blue. NTU compares against a FY 2021 baseline, since the administration’s Office of Management and Budget (OMB) did not have time to update to an FY 2022 baseline after Congress passed final FY 2022 appropriations in March of this year. 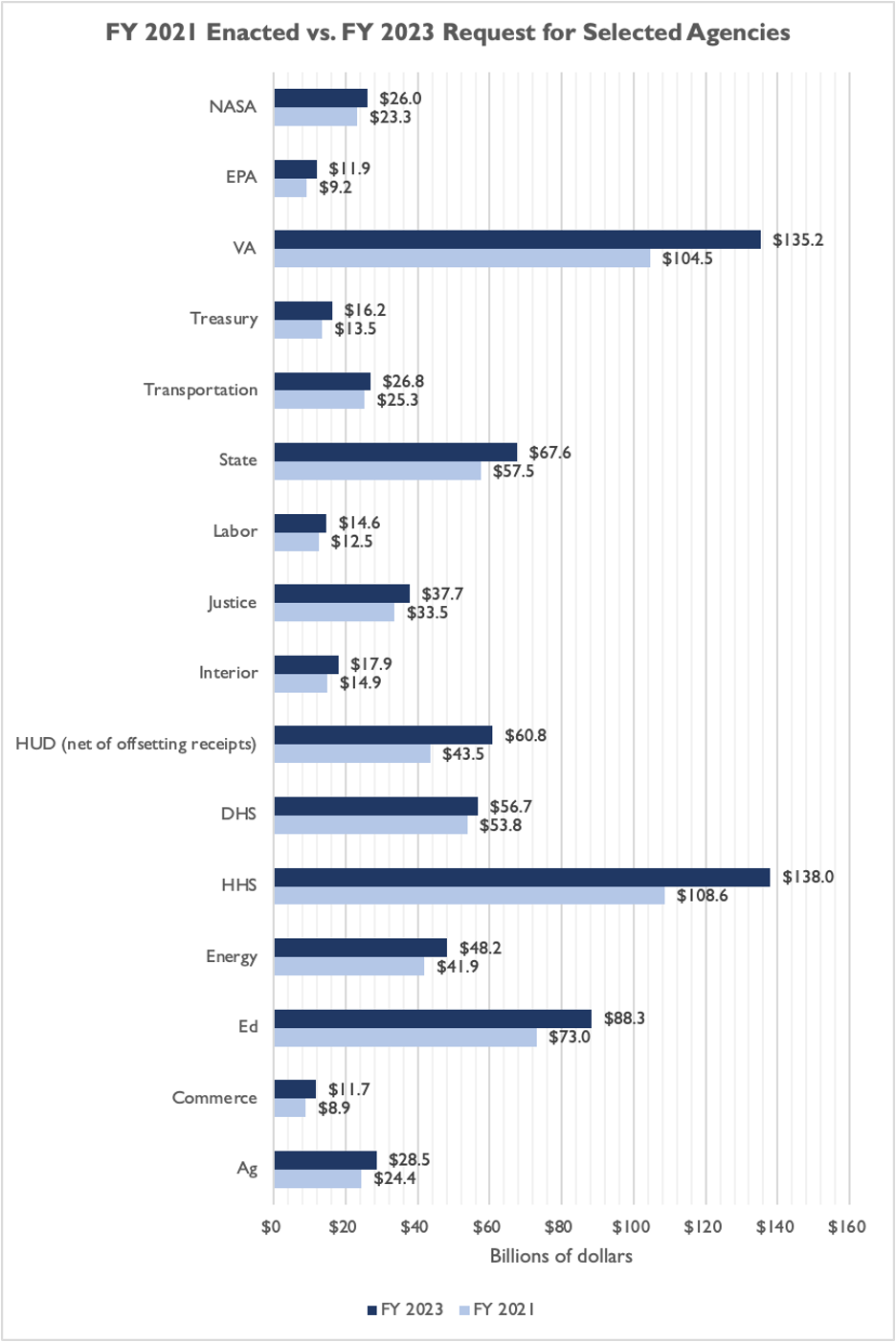 While not pictured in the above chart, DoD also receives a major boost from the Biden budget. The non-partisan Taxpayers for Common Sense (TCS) tallied up national defense spending numbers in the Biden budget request and found that the total FY 2023 budget request – inclusive of some non-DoD defense spending, such as the National Nuclear Security Administration (NNSA) and other “defense related activities” – is $60.4 billion (or 7.2 percent) higher than what was passed by Congress for FY 2022 just weeks ago. 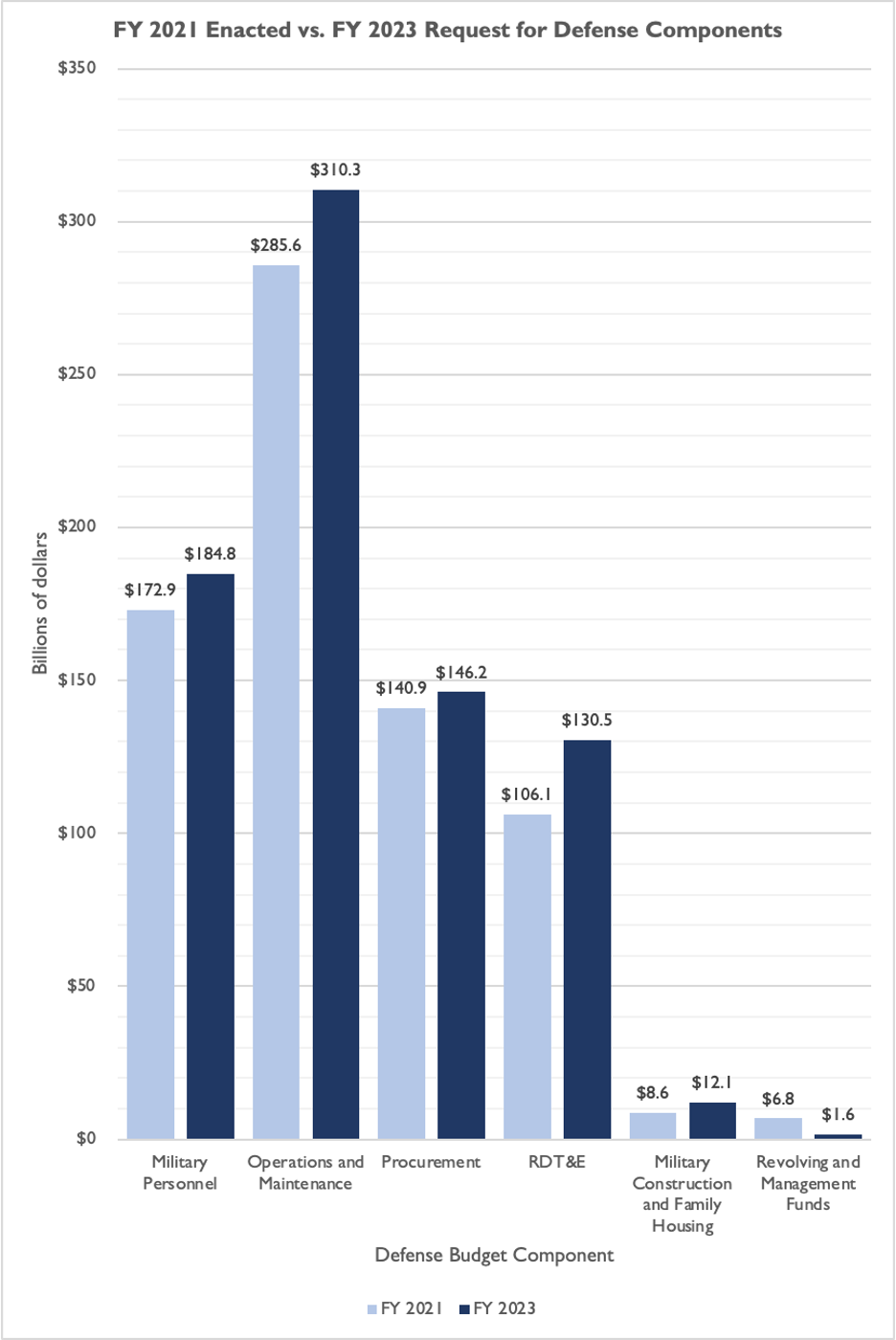 The Biden administration proposes paying for this new spending – which also includes several proposals that would increase mandatory spending – with massive tax increases.

Notably, none of the Biden administration’s tax proposals in its FY 2023 “Green Book” are expected to be included in whatever version of Build Back Better (BBB) is negotiated by the administration and Congress. The President left those tax-and-spending proposals out of his budget request, so any tax increases proposed in the budget this month would be on top of tax increases proposed down the road in a new version of BBB.

The Biden administration proposes increasing revenue by $2.5 trillion over 10 years relative to the current baseline. By far the largest tax increase, accounting for more than half of the net impact of Biden’s FY 2023 revenue proposals, is an increase in the corporate tax rate from 21 percent to 28 percent. Biden’s Treasury Department estimates that this would raise $1.3 trillion in corporate taxes over 10 years, with some of those revenue increases also coming from a related, higher tax rate on businesses’ foreign income.[2] 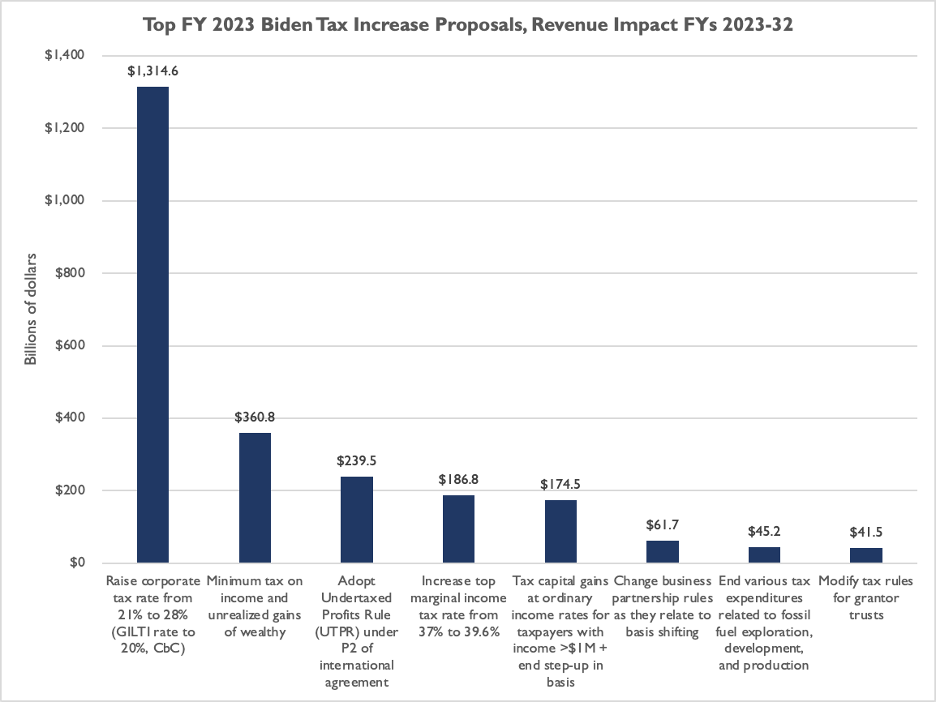 NTU has written extensively about many of these topics, including corporate tax rates, international tax reform, and ‘mark-to-market’ taxation of unrealized gains. Concerns abound with these FY 2023 Biden proposals – some new and some old – and include their impact on American job creation, location of intangible assets and investment, tax code fairness, constitutionality, IRS administration, and taxpayer compliance. NTU and NTU Foundation will have more to say on these tax proposals in the weeks to come, but neither the Biden administration nor Congressional Democrats should treat these proposals as consequence-free magic wands that enable them to spend more federal dollars in the decades to come. 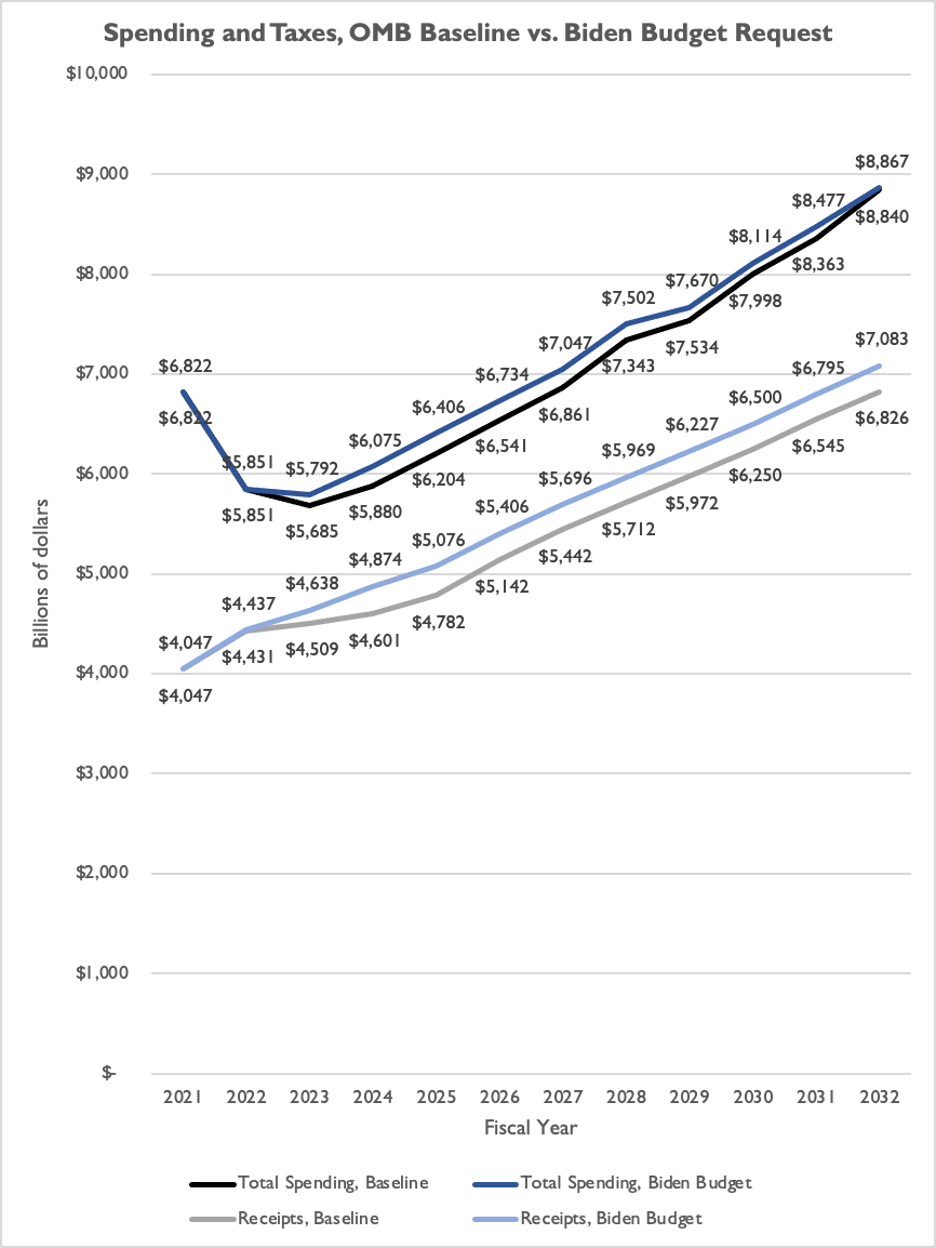 As a result of President Biden’s major spending proposals, deficits continue to exceed $1 trillion in every fiscal year of the next decade, and – like under the budget baseline prepared by OMB – deficits approach $2 trillion per year under the Biden budget proposal by the early 2030s. 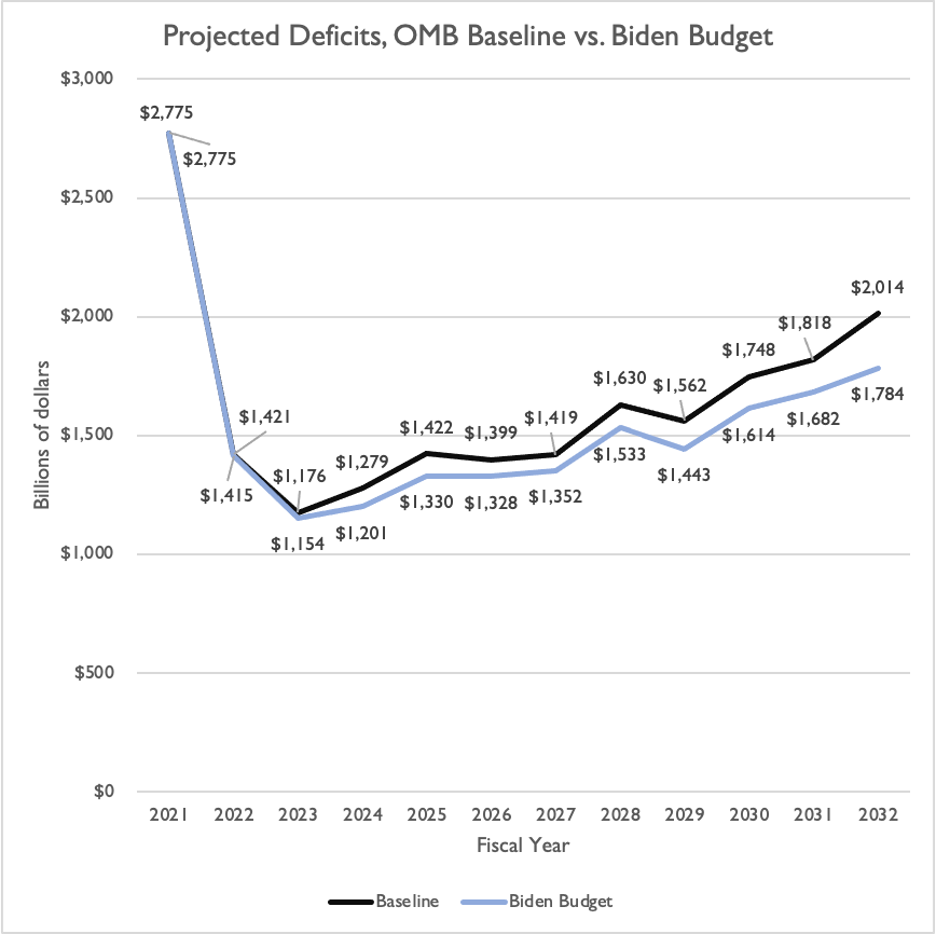 Even though the Biden White House has bragged about deficit reduction in their budget proposal, their request still would add trillions of dollars to the debt over the next decade – and hundreds of billions of dollars per year at minimum. And more than $2.5 trillion in proposed tax increases would not make a meaningful difference in the nation’s deficit and debt trajectories, in part because the Biden administration proposes using much of that new revenue on even more federal spending.

Overall, the FY 2023 Biden budget request would spend too much, tax too much, and would not make nearly enough of a meaningful dent in federal debt and deficits. Fortunately, most presidential budgets presented to Congress are quickly thrown in the trash heap. Unfortunately though, Congress has a tendency to add spending on top of presidential budget requests all too often. NTU will continue to work to hold the president, and members of Congress in both parties, to account for major spending increase proposals.

[1] We compare FY 2023 budget request totals to FY 2021 enacted amounts, since OMB did not account for final enacted FY 2022 appropriations in their March budget request.

[2] The administration notes that the Global Intangible Low-Taxed Income (GILTI) rate would rise under their 28-percent corporate income tax proposal. According to the Biden Treasury Department, the GILTI rate would nearly double, from 10.5 percent under current law to 20 percent under the Biden proposal. GILTI would also be assessed on a country-by-country basis, to comply with the international tax agreement the U.S. agreed to last year, rather than on its current global, blended basis. For more, read here.