Moderate Democrats in Congress may have won a key concession from progressives on the “Build Back Better Act” social spending plan advanced by the Biden administration: significantly cutting the topline spending in the bill, potentially by trillions of dollars. However, policymakers and taxpayers should be wary of tried and true timing tricks that may make the Build Back Better Act (BBB) appear less expensive than $3.5 trillion.

If it’s a major priority in BBB, chances are Congressional Democrats are proposing ending it after two or three or four years, rather than enacting these policy changes on a permanent basis. While this will bring down the headline amount of spending in BBB,[1] potentially fitting the agenda within a lower topline spending number, the practical impact of so-called program ‘cliffs’ is to create enormous political pressure to extend the programs.

A few prominent examples include: 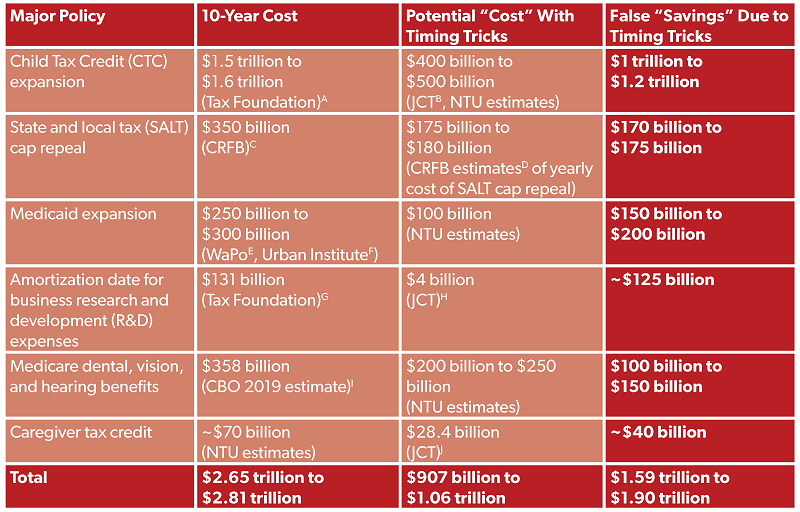 Add these (very) rough estimates up, and between $1.6 trillion and $1.9 trillion in 10-year costs could be hidden from the public.[5] CRFB has done similar work, estimating the potential total cost of BBB to be between $5 trillion and $5.5 trillion over a decade, rather than the headline cost of $3.5 trillion, depending on the policy choices Congressional Democrats and the Biden administration make.[6]

Unfortunately, hiding the true long-term costs of BBB may be part of some policymakers’ strategy, now that moderates have negotiated a nominal decrease to the topline spending in BBB. Rep. Alexandria Ocasio-Cortez (D-NY), Congressional Progressive Caucus Chair Pramila Jayapal (D-WA), and White House senior advisor (and former Congressman) Cedric Richmond are among the progressive voices recently suggesting shorter timeframes for programs, which could help lawmakers pass a version of BBB that could win support from progressives and moderates.

The policy choices mentioned above, though, would be tantamount to kicking a multi trillion-dollar can down the road, creating irresponsible policy and spending cliffs in the near future and hiding the true cost of BBB from taxpayers. To be clear, Congressional Democrats and the Biden administration are not the first set of policymakers to contemplate such choices. TCJA, for example, allowed for popular tax cuts on the individual side of the code to expire after 2025, and delayed some unpopular potential tax hikes (which helped offset the bill’s tax cuts) until 2022 or later.

Policymakers should strive for a more honest approach, though, and ensure that voters and taxpayers understand the full cost of BBB. A better approach for fitting policymakers’ agenda into a smaller BBB topline would be to cut proposed new programs entirely or target expensive programs at Americans who truly need taxpayer-funded assistance. Trillions of dollars could be on the line.

[1] Headline amounts of spending (or tax cuts, for that matter) are often expressed in terms of their costs over a 10-year window. These are the estimates that the Congressional Budget Office (CBO) and the Joint Committee on Taxation (JCT), lawmakers’ budget and tax scorekeepers, regularly provide for proposed legislation.

[3] We refer to “budget impact” because CTC is neither just a tax cut nor just a spending increase. A portion of CTC is a tax cut, because it reduces the tax liability owed by many parents to as low as $0. Beyond reducing tax liability to $0, the expanded CTC is refundable. This means parents can receive more in CTC dollars than they owe in taxes for a given year. The refundable portion of CTC counts as increased spending (rather than reduced taxes), so we refer to the “budget impact” of CTC as the combined effects of the tax cuts and spending increases.

[4] The SALT cap expires in 2026, when other individual provisions of the Tax Cuts and Jobs Act (TCJA) expire.

[5] Unlike most of the policy options mentioned above, delaying the provision of dental care under Medicare until 2028 would not create a spending or policy “cliff.” Instead, this masks the long-term costs of Medicare dental benefits by only providing them for only four years out of the 10-year scoring window estimated by CBO and JCT (see footnote 1).

[6] This is relative to the previously stated topline spending number of $3.5 trillion. CRFB’s analysis also covers more programs than those covered here.

[B] Joint Committee on Taxation. (2021.) "Estimated Budgetary Effects Of An Amendment In The Nature Of A Substitute To The Revenue Provisions Of Subtitles F, G, H, I, And J..." Retrieved from: https://www.jct.gov/publications/2021/jcx-42-21/

[C] "SALT Cap Repeal Would Be a Costly Mistake." Committee for a Responsible Federal Budget, September 10, 2021.

[H] Joint Committee on Taxation. (2021.) "Estimated Budgetary Effects Of An Amendment In The Nature Of A Substitute To The Revenue Provisions Of Subtitles F, G, H, I, And J..." Retrieved from: https://www.jct.gov/publications/2021/jcx-42-21/

[J] Joint Committee on Taxation. (2021.) "Estimated Budgetary Effects Of An Amendment In The Nature Of A Substitute To The Revenue Provisions Of Subtitles F, G, H, I, And J..." Retrieved from: https://www.jct.gov/publications/2021/jcx-42-21/