What would you do with an extra $300 billion in your wallet? A recent bill by Rep. Chip Roy (R-TX), titled the Healthcare Freedom Act (H.R. 9160), seeks to help American workers find out by replacing the employer-sponsored insurance (ESI) tax exclusion with a new system that would supercharge health savings accounts (HSAs) – renamed health freedom accounts under the bill. Rep. Roy’s approach is unique and would represent a sea change in America’s tax treatment of health coverage, and, while promising, requires further study from stakeholders inside and outside of government.

The ESI exclusion has been a defining feature of the tax code since World War II. Due to price and wage controls at the time, employers started to offer enhanced employee benefits to compete for talent. After the war, the government protected these benefits from taxation.

Why does this artifact of the wartime 1940s still matter today? Well for starters, ESI health benefits total around $1.3 trillion in the American economy every year. That’s close to six percent of GDP which goes to health care expenses without ever reaching workers’ bank accounts. Workers’ direct payment of that cost is around $327 billion. During benefit renewal season or when choosing a job, workers make choices that are impacted by this exclusion. A worker who negotiates a higher salary in lieu of employer-sponsored insurance, for example, will pay more in taxes than a worker who opts for the ESI plan. This can lead to overpriced and unnecessary levels of coverage for workers who don’t need a ‘Cadillac’ plan with all the bells and whistles.

If you asked many workers, they would rather have the cash so they can choose what to spend it on. Workers’ cash compensation would likely be higher if the ESI exclusion didn’t distort the market. Even worse, health insurance costs for the whole market might be significantly lower if the utilization of health benefits were more appropriately priced into workers’ insurance purchasing.

For instance, if a fast food employee was choosing between two jobs that offered the same total compensation, but the first one provided health insurance, and the second one had higher wages without health insurance. Those with higher wages are implicitly punished because they receive less total cash relative to the untaxed benefits provided by health insurance. Put simply, this market anomaly takes cash out of workers’ wallets and out of their control. 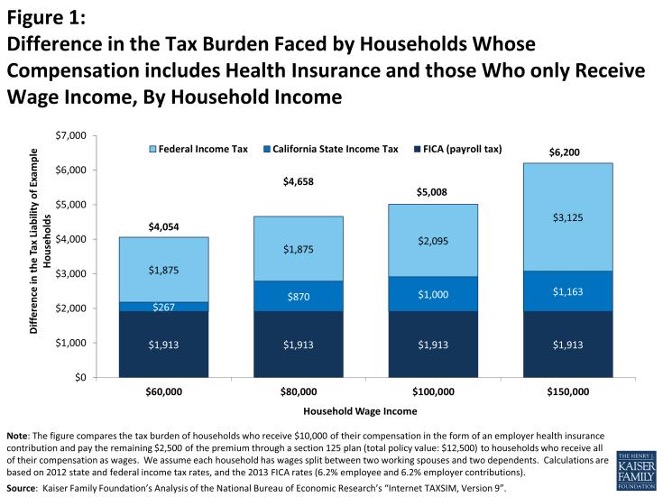 Rep. Roy’s Healthcare Freedom Act (HFA) would realign the health insurance market through some innovative methods. One of the major components is that the HFA would phase out the ESI exclusion after five years. However, employers would be able to contribute tax-free to HSAs, which, as mentioned earlier, would be renamed health freedom accounts. The legislation would boost the health freedom accounts’ contribution limit to $12,000 for single filers and $24,000 for joint filers (up from $3,850 and $7,750 for 2023 HSAs under current law). Significantly, the HFA would also allow Americans to use their health freedom accounts to pay for insurance premiums and other, new types of health expenses. This would be a major boost for direct payment systems, health care cost-sharing ministries, and other innovative insurance alternatives.

Rep. Roy’s legislation is innovative in the way it could free Americans’ health spending and put workers’ back in control of their health coverage through a phaseout of the ESI exclusion. The bill would also minimize the distortionary effects of untaxed health benefits. Finally, the Healthcare Freedom Act holds promise in better enabling Americans to have full transparency and knowledge of their own health care costs. Knowing exactly how much they are spending on health coverage would allow American families to pick the plan that’s best for them, whether in health insurance or health cost-sharing ministries, or direct payment systems. Such a significant change could lead to the cost of health care going down for all Americans through the selection of more tailored and less wasteful health coverage.

NTU believes that stakeholders inside and outside of government need to conduct much more research on the economic effects of an ESI phaseout before this ambitious legislation is passed or implemented. It remains unclear how much economic benefit workers would earn in the switch from ESI to HSAs (or the renamed health freedom accounts), or if legislation like the Healthcare Freedom Act would vastly disrupt the community rating of insurance markets if there was a huge shift from group to individual purchases of insurance. Still, Rep. Roy’s Healthcare Freedom Act offers some unique and innovative ideas to reform perverse health coverage incentives in the nation’s tax code. NTU applauds Rep. Roy for taking a thoughtful approach to reforming our health care system.