The U.S. spends substantially more on health care, of both the public and private variety, than many other developed countries. Consider this graphic from PBS, which uses Organisation for Economic Co-operation and Development (OECD) Health data: 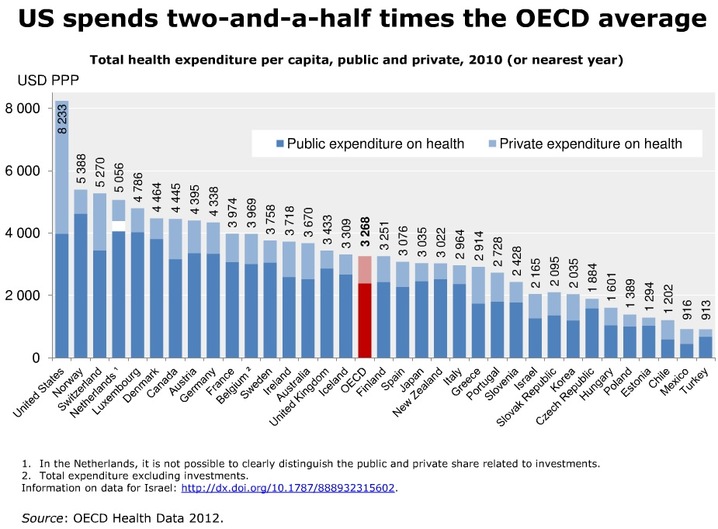 The OECD has a full run-down of the numbers here. Their figures offer an interesting glimpse at the nature of health care provision, financing, and outcomes across a number of different countries.

But why are health care costs and expenditures rising? The Government Accountability Office (GAO) released a report on Tuesday that offers some possible explanations. The report was requested by Senator Jeff Sessions (R-AL) of the Senate Budget Committee, and was discussed in a recent hearing on the effect that the Patient Protection and Affordable Care Act (ACA) could have on long term budget figures. According to the report, the primary factor behind the rising cost of health care could be due to changes in health-related technology:

The chart above is taken from page 30 of the report, and it compares the relative influence certain factors have on health care costs. The factors were identified by four different studies conducted over a 20 year range. It is important to note that there is always a degree of uncertainty when analyzing something as complex as the health care industry. Nevertheless, the graph shows the general agreement among these researchers that technological change may be most responsible for driving health care cost growth per capita. "Technological change" is identified as "changes in clinical practice that enhance the ability of providers to diagnose, treat, or prevent health problems." Specifically, this could mean the development of new drugs, more precise surgical machinery, or new treatment procedures.

At first glance, the conclusion might seem somewhat counter-intuitive -- after all, as medical technology becomes more advanced, shouldn't expenditures on health care be decreasing? GAO explains:

"In general, a technological change that enables providers to treat a previously untreatable disease will increase health care spending, while expanding disease management or shifting disease management to prevention or cure can lead to either increased or decreased health care spending. However, the introduction of new treatments and technologies may result in increased health care spending due to the possibility that health complications may arise from a new treatment, or that patients survive one disease long enough and eventually are diagnosed with an additional disease with additional treatment cost."

The takeaway is that health care spending is affected by a web of interconnected variables, especially as medical technology changes rapidly. Ironically enough, higher health expenditures could be a sign that the services are working as designed. As the population grows, ages, and becomes increasingly eligible for health services under the ACA, the Congressional Budget Office expects to see health care spending continue to grow. The debate going forward will likely center around how much of that spending should be privately or publicly funded.

On a related legislative note, Congressman Erik Paulsen introduced a bill to repeal the recently-enacted 2.3 percent tax on medical devices. NTUF examined that bill, among others, in last week's edition of the Taxpayer's Tab. The bill was introduced to "... [eliminate] barriers to medical innovation, ensuring patients have access to life saving technologies," according to the sponsor.