On Thursday morning, the nonpartisan experts at the Joint Committee on Taxation (JCT) released their score of most of the revenue provisions that Democrats intend to pay for new spending in the Build Back Better Act.

Here are a few important takeaways from the score.

Subtitle H of the new legislation -- “Responsibly Funding Our Priorities” -- raises taxes a net $1.48 trillion over 10 years. Combined with yet-to-be-scored provisions on IRS enforcement (likely a net $120 billion revenue increase) and prescription drug pricing provisions (possibly up to $250 billion spending decrease), congressional Democrats may get to around $1.85 trillion in ‘pay-fors’ on Build Back Better, enough to fund the White House’s estimated $1.85 trillion in spending on paper under this version of BBB.

The key phrase here, though, is on paper.

Earlier this week, the budget experts at the University of Pennsylvania Penn-Wharton Budget Model (PWBM) estimated that all the spending initiatives in BBB, if they were made permanent, would cost $4.13 trillion over 10 years -- a $2.28 trillion, or 123 percent, difference from the on-paper cost of BBB right now.

Here are the most expensive provisions in BBB, if all were made permanent: 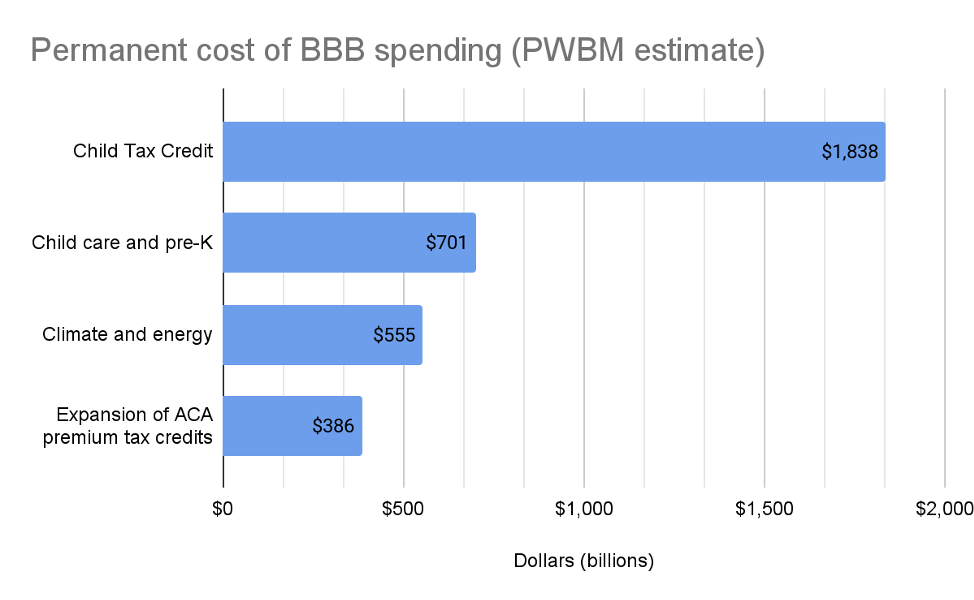 Of the above provisions, only the climate change/energy spending programs (and tax incentives) are permanent. The other three categories of programs come with early sunsets even though many lawmakers would no doubt prefer to make these programs permanent.

If lawmakers in favor of the state and local tax (SALT) deduction fight to remove the new, $72,500 SALT cap for tax years after 2025 (thereby fully uncapping SALT, which is the goal for some policymakers), the actual cost of BBB could grow by $200 billion or more.

In all, BBB proponents may be obfuscating up to $2.5 trillion in long-term costs on the spending side of BBB, since many lawmakers are intent on making all the spending provisions in BBB permanent. This obfuscation makes a bill with potentially more than $4.33 trillion in 10-year impacts appear to only cost $1.85 trillion.

Higher Taxes on Businesses Do the Heavy Lifting in BBB

Just six tax provisions in the bill collectively raise $1.34 trillion in revenue over 10 years, or about 90 percent of all the tax increases included in this newest version of BBB. Five of the six provisions, totaling $1.11 trillion, either directly or indirectly impact U.S. businesses -- both C corporations and pass-through businesses (which ‘pass’ business earnings ‘through’ to the individual owners of the business, who pay taxes on those earnings on their individual tax return).

Those six provisions are below, with the five provisions affecting businesses highlighted in red: 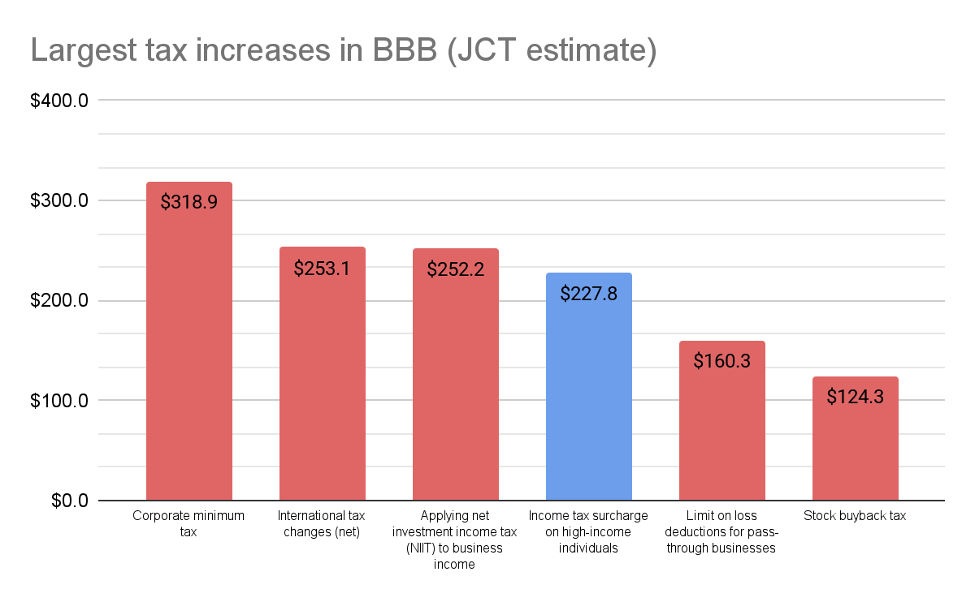 We should note that the income tax surcharge on high-income individuals may also affect pass-through businesses.[1]

That tax increases on businesses are doing the heavy lifting is concerning, given JCT and other nonpartisan experts have estimated that workers bear a significant portion of tax increases on corporations. For example, based on NTU’s analysis of JCT data, an increase in the corporate tax rate from 21 percent to 28 percent (as previously proposed by President Biden) would have increased taxes on taxpayers making less than $100,000 per year by $100 billion. It is a matter of debate precisely what portion of the corporate minimum tax, international tax changes, and stock buyback taxes will be borne by workers and/or by low-income and middle-class taxpayers, but we know it is a significant portion. And while the NIIT, income tax surcharge, and net operating loss (NOL) provisions may have a statutory incidence on high-income owners of pass-through businesses, it is likely these tax increases will have an impact on those businesses and the workers they employ.

The CTC Is Primarily a Spending Program, Not a Tax Cut

Regardless of policymakers’ position on the expanded CTC -- and NTU has written favorably of the CTC’s potential long-term impact on reducing child poverty -- the changes proposed in BBB make the CTC less of a tax cut than a spending program.

According to JCT, about $154.3 billion of the $184.6 billion budget impact of CTC (83.6 percent) is spending increases, not revenue reductions. Even though CTC is framed as a tax cut, that is something of a misnomer given the primary benefits of the newly expanded CTC are cash benefits delivered to families beyond completely wiping out their federal income tax liabilities.

In other words, CTC is a tax cut up to the point it reduces a parent’s income tax liability to $0 (i.e., the non-refundable portion of CTC). After that, CTC is a spending program (i.e., the refundable portion). This may not affect lawmakers’ positions on the expanded CTC -- support or oppose -- but it is more honest to frame the expanded CTC as new spending than a new tax cut. (For more, see a breakdown from NTU Foundation’s Demian Brady.)

The JCT score is critical and valuable information for lawmakers weighing the budget and tax impacts of the new BBB, but policymakers and taxpayers still need to see a full Congressional Budget Office (CBO) score to understand the full impacts of the sprawling BBB package. We have one major part of the scoring question answered with JCT’s analysis. CBO will have important data on the additional spending provisions, IRS enforcement measures, prescription drug pricing efforts, and more.