In celebration of the House passage of the Build Back Better Act, a top legislative priority for Democrats that spends and raises trillions of tax dollars over the next decade, Speaker Nancy Pelosi wrote to her colleagues that the legislation “forge[s] extraordinary progress for the American people: creating good-paying jobs, lowering costs and cutting taxes” (emphasis ours).

Does Build Back Better cut taxes? For some, yes. For a majority of Americans, the answer may be no, depending on the year and on where those Americans fall along the income spectrum.

This is according to new analysis from the nonpartisan Joint Committee on Taxation (JCT), lawmakers’ tax experts who model the effects proposed legislation would have on taxpayers across the country.

What do these analyses tell us? Here are a few takeaways. 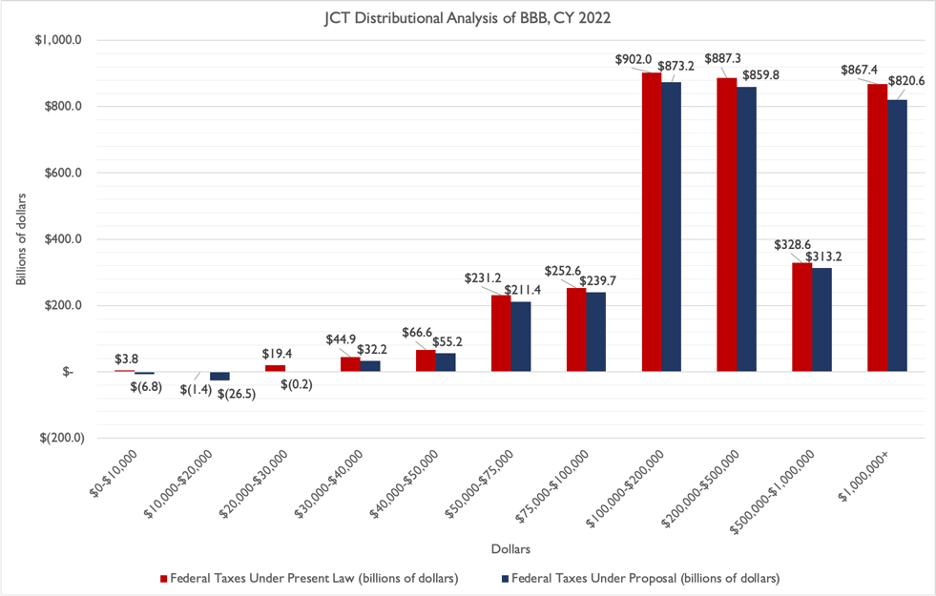 (Note: If you're reading this on a mobile device, consider tilting your phone horizontally for the best experience viewing this graphics.)

Of the 11 income ranges examined by JCT, each one sees a decrease in their federal taxes for calendar year 2022 under Build Back Better. The largest nominal tax decrease is for taxpayers making over $1 million per year, who see a $46.8 billion decrease in tax liabilities in 2022 alone. (Note, however, that although tax liabilities for taxpayers making more than $1 million per year decrease in 2022, the average tax rate for those taxpayers increases by a few percentage points, from 29.9 percent to 33.1 percent; former Ways and Means Committee economist Don Schnedier has good explanations of this phenomenon here and here.)

The largest proportional decrease in tax liability, however, would go to taxpayers making less than $10,000 per year. Their tax liabilities would fall by $10.6 billion, from $3.8 billion under present law to -$6.8 billion under the legislation. This negative tax liability is likely due in large part to refundable tax credits, such as the Child Tax Credit (CTC) and the Earned Income Tax Credit (EITC) for childless workers, which would be expanded significantly for just one year (2022) under Build Back Better.

Smaller Tax Reductions, or Even Tax Increases, Take Effect By 2025

By 2025, the distribution of tax changes looks quite different from 2022: 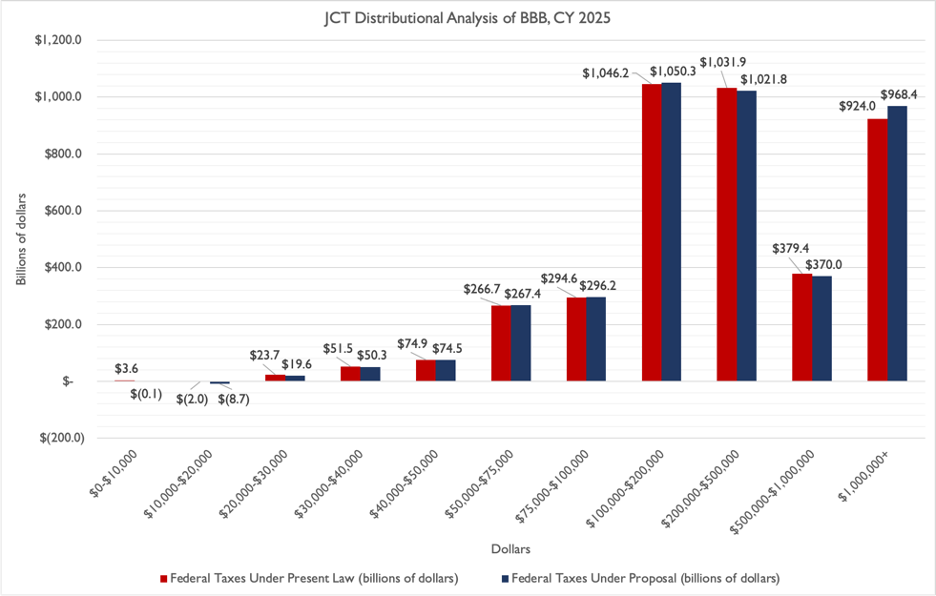 Taxpayers making less than $50,000 per year would still see a decrease in their tax liabilities in 2025 relative to current law, but the proportional size of the tax change is much smaller than in 2022. By 2025, under JCT’s assumptions, the expanded CTC and EITC are years in the past. Taxpayers making between $50,000 and $200,000 would see their tax liabilities collectively increase, but only by a little less than $6 billion on net in calendar year 2025.

Interestingly, taxpayers making between $200,000 and $1 million would still see a net decrease in their tax liabilities in 2025. As noted above, this is likely due to the effects of raising the SALT cap, which under current law would be $10,000 in 2025 but under Build Back Better would be $80,000 in that year. Taxpayers earning more than $1 million per year would see their taxes go up the most, on a nominal and relative basis, in 2025. 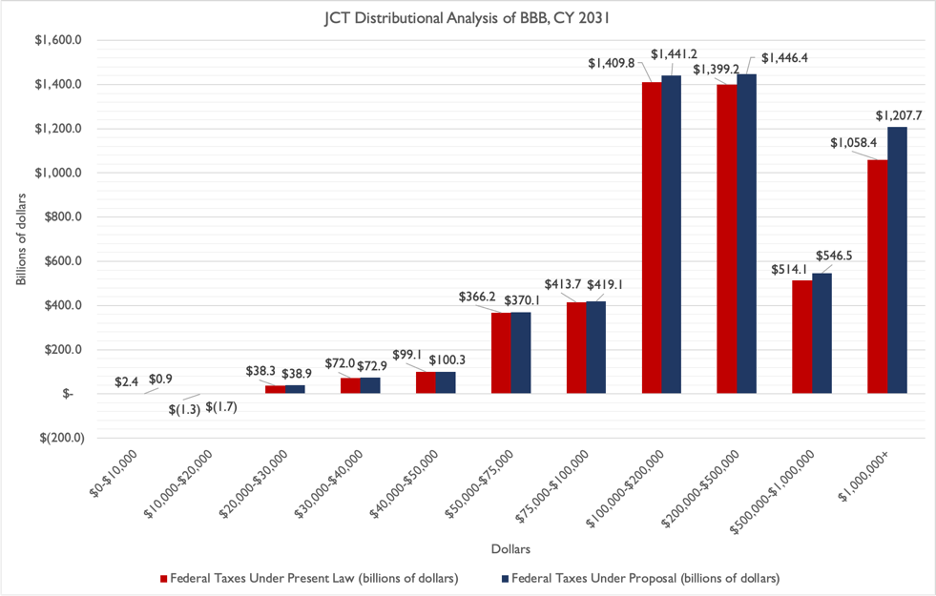 Despite some of the headline tax changes of Build Back Better, such as an expanded CTC and making wealthy taxpayers “pay their fair share,” the net impacts of the temporary tax cuts and the permanent tax increases in the legislation are relatively small. The overwhelming majority of taxpayers making between $40,000 and $75,000 -- comprising a little less than 30 percent of all taxpayers in 2018 -- see tax changes of less than $100 after 2022. 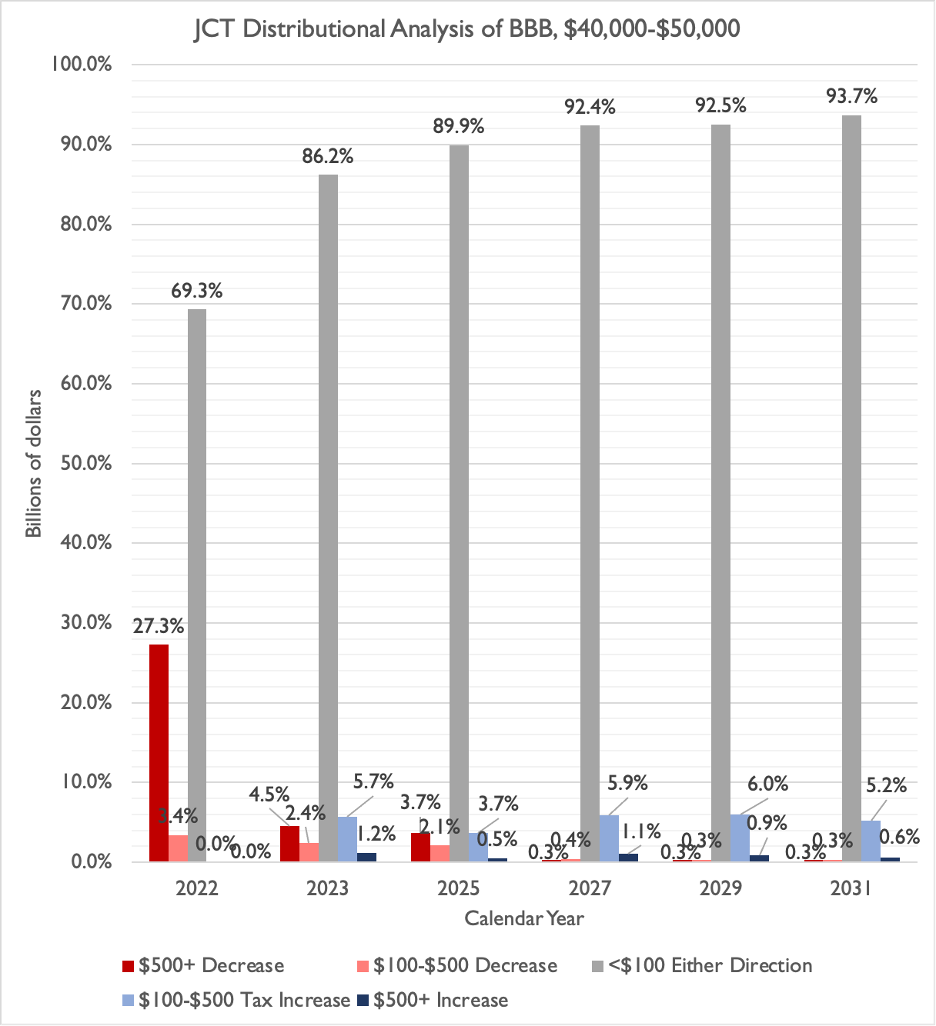 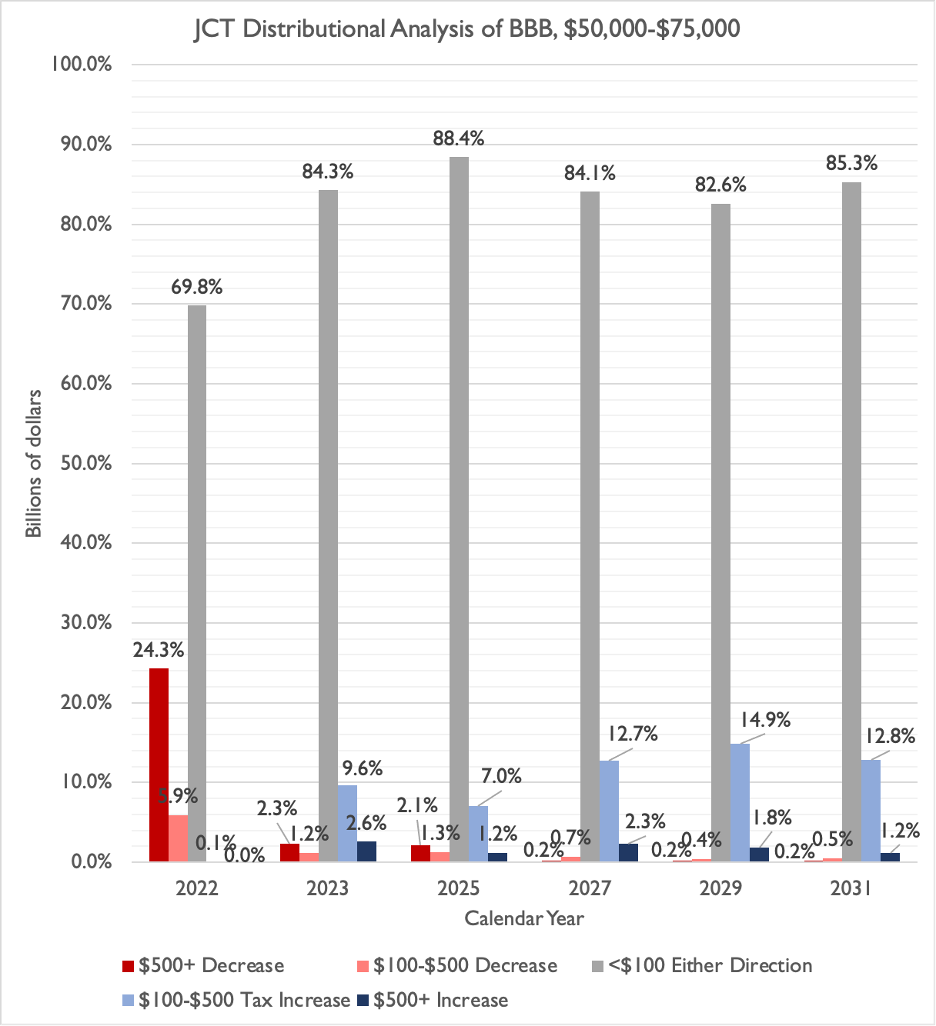 While an extended CTC could significantly change the makeup of these tables in future years, Congressional Democrats have still not proposed ways to pay for an expanded CTC. The Penn Wharton Budget Model (PWBM) has estimated a permanently expanded CTC would cost more than $1.8 trillion over the next decade alone. 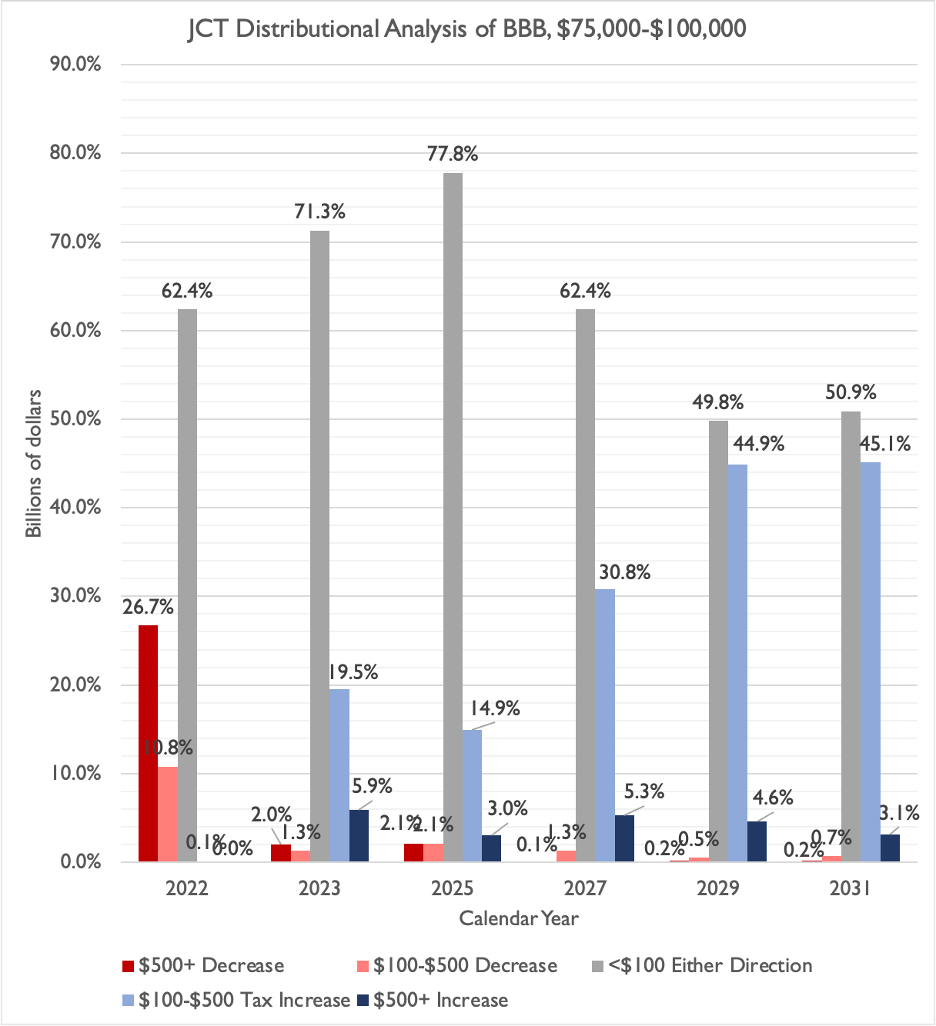 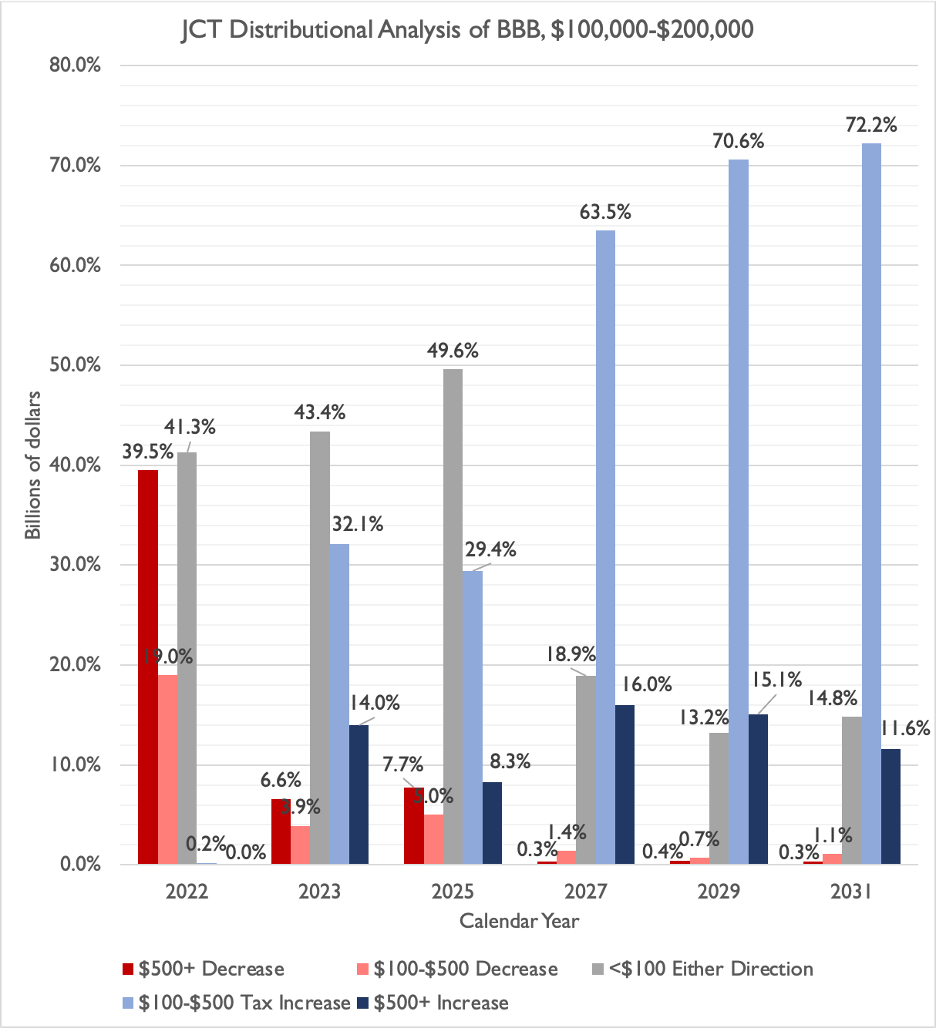 While these taxpayers are not near the poverty level and may not be struggling financially as much as their peers in the bottom 50 percent of income earners, they still -- as noted above -- make up more than a third of all taxpayers. Many are in the middle class. Indeed, many of them likely fall under President Biden’s pledge not to raise taxes on households making more than $400,000. The JCT analysis would suggest that the tax changes in the Ways and Means title of Build Back Better violate the spirit, if not the letter, of President Biden’s pledge.