Kaiser Family Foundation (KFF), one of the leading health research organizations in the country, recently came out with a concerning new analysis. KFF estimates that of the 78 million people who live in a family in which someone lost a job between March 1 and May 2, 26.8 million are newly uninsured due to losing their employer-sponsored health insurance (ESI).

The task of insuring these individuals is daunting, but not impossible. National Taxpayers Union believes the best, most fiscally responsible approach to doing so for many Americans is a proposal we’ve dubbed Pandemic Health Accounts (PHAs). These accounts would be pre-funded by the federal government and empower beneficiaries to select the health insurance options that best suit their own individual needs. Furthermore, we estimate PHAs would cost between $56 billion and $67 billion, and could save the federal government tens of billions of dollars relative to several other options to provide coverage to displaced workers. To best understand why PHAs are the best solution to this growing problem, it’s important to first get a better understanding of the data provided by KFF.

Most people losing their ESI have the option to continue their coverage under the Consolidated Omnibus Budget Reconciliation Act (COBRA), but beneficiaries who elect this option are responsible for 102 percent of the premium costs. This represents a major shift from when they were employed, given the average employer share for ESI is somewhere between 70 and 80 percent. Since the average ESI premium was $599 per month for individuals and $1,715 per month for families, this higher premium share is cost prohibitive for many Americans.

There are several pending proposals to assist these millions of people losing their ESI:

We believe each of these proposals have unique shortcomings, but they all share a few basic traits: they are grand in size and scope, and apply to broad swaths of the population, when a more flexible and fiscally responsible solution would better serve recently displaced workers and taxpayers.

The new data from KFF, though startling and troubling, offers a clearer picture of the populations PHAs could help - and how PHAs could help displaced workers in a more effective and efficient way than other options lawmakers are considering.

First, KFF’s data allows us to pinpoint roughly how many people PHAs could help at the moment. KFF estimates that 78 million people live in families with someone who has lost their job in the last two months, and that of these 47.6 million (61 percent) had ESI, 23.4 million (30 percent) had Medicaid, Medicare, military, or private insurance, and another seven million (nine percent) were already uninsured before losing their job.

The data is even more specific for the 61 percent of individuals who had ESI upon losing their job. As previously stated, 26.8 million are newly uninsured (34 percent of the 78 million who live in families with a worker that has lost their job), while KFF estimates 19.2 million will retain ESI through a family member (25 percent of total) and an additional 1.6 million (two percent) will retain some other coverage.

The highlighted rows are the populations PHAs seek to target: people who lost their job and do not have access to a family member’s ESI or Medicare.

So, to summarize, here is a rough breakdown - based on KFF’s data - of how many Americans would currently be eligible for PHAs:

PHAs can accomplish a few things that certain other options cannot easily achieve: 1) target relief at those who need it, rather than make broad-based changes to the American health care system during a pandemic, and 2) make relief a temporary bridge rather than a permanent and expensive change to law, amidst other priorities and programs competing for taxpayer dollars in an unprecedented time.

Determining the cost of our PHA proposal is challenging, because it is difficult to predict a few things: 1) how many people will be eligible and will receive the benefit; 2) what proportion of PHAs will be individual accounts (funded at $2,000) and what proportion will be more generous family accounts ($6,000). KFF’s data enables us to make stronger predictions for the first item. The second item is more difficult for a few reasons: 1) we do not know what proportion of our target populations above are children that are dependent on a parent’s options, and 2) we don’t know what proportion of children in the PHA target populations are eligible for the Children’s Health Insurance Program (CHIP), since CHIP eligibility standards vary by state and are more generous than Medicaid eligibility standards.

A simpler task, if more inexact, is to offer cost estimates based on the proportion of PHAs that are individual accounts and the proportion that are family accounts. KFF estimates that roughly 23 percent of the newly uninsured are children (6.1 million), but that the vast majority of them (89 percent, or 5.5 million), are eligible for CHIP. Therefore, we offer four samples for PHA costs below: 1) where 90 percent of PHAs are individual and 10 percent are family; 2) an 80/20 split, 3) a 70/30 split, and 4) a 50/50 split. Given KFF’s data and generous CHIP eligibility standards, we do not anticipate more than 50 percent of PHAs would be family accounts (should all 27 million people in our target population gain access to a PHA).

Projected costs range from $56.3 billion to $67.0 billion. The methodology assumes a static number of individuals covered under a PHA (26.8 million) and, as a conservative estimate, assumes anyone covered under a family account is in the least cost-efficient situation (i.e., a family account with only two people, where the PHA benefit averages out to $3,000 per person; in a family of three the benefit would average out to $2,000 per person, a family of four $1,500 per person, and so on): 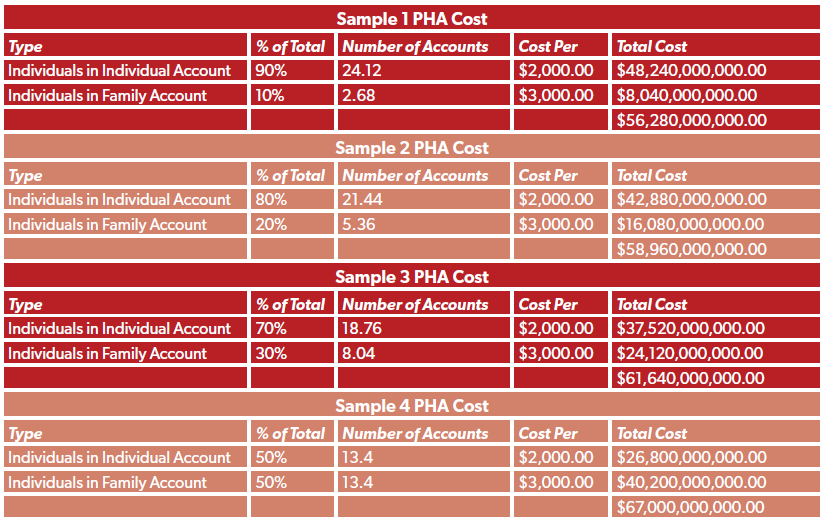 We think this approach is more cost-effective than other options lawmakers have presented. Proposals to expand government coverage, such as having Medicare cover all out-of-pocket costs for the uninsured and underinsured as proposed by Sen. Bernie Sanders (I-VT), would cost $150 billion over four months according to the Committee for a Responsible Federal Budget. The Joint Committee on Taxation (JCT) just estimated that Speaker Pelosi’s 100-percent COBRA subsidy for nine months, a longer time period, would cost $100 billion - considerably less than the Medicare option proposed by Sen. Sanders.

Though our estimated PHA cost of between $56 billion and $67 billion is not pocket change, the net cost for the plan would be lower when accounting for the 12.7 million people served by PHAs who would otherwise go to Medicaid. We estimate placing 12.7 million on Medicaid would cost roughly $15 billion to $25 billion every four months (the proposed PHA coverage period).

KFF’s new report offers some clarity for policymakers; namely, it reveals the target populations that most need federal assistance in the midst of this pandemic. Broad-based proposals risk putting millions of people on an expensive option when more affordable alternatives may be available on individual basis (i.e., COBRA), while other proposals offer permanent or long-lasting changes to federal health programs that would be more expensive for taxpayers than PHAs in the long run (i.e., permanent ACA PTC expansion, Medicare or Medicaid expansion). We believe that PHAs should be at the top of the list if policymakers want a targeted, fiscally responsible way to help millions of people losing ESI.