As the COVID-19 pandemic began to have a major impact on U.S. public health and economic activity, Congress poured money into the Small Business Administration (SBA) to assist small and sometimes mid-size companies that faced major disruptions due to pandemic-related lockdowns. SBA’s budget grew more than a thousand fold from fiscal year (FY) 2019 to 2020, from $715 million to over $760 billion.

Though SBA’s budget has come back down to Earth for the current fiscal year (2022), challenges the agency faced handling an influx of COVID-era responsibilities point to the need for agency reforms. The Improve the SBA Act, new legislation from House Small Business Committee Ranking Member Blaine Luetkemeyer (R-MO) and 10 colleagues on the Committee, would be a great step towards reforming the agency.

It is particularly notable that the Improve the SBA Act asks the agency to be more responsive to GAO and OIG recommendations, because the agency handled hundreds of billions of taxpayer dollars during the pandemic and because Congressional Democrats intend to divert more taxpayer dollars to SBA in the future. 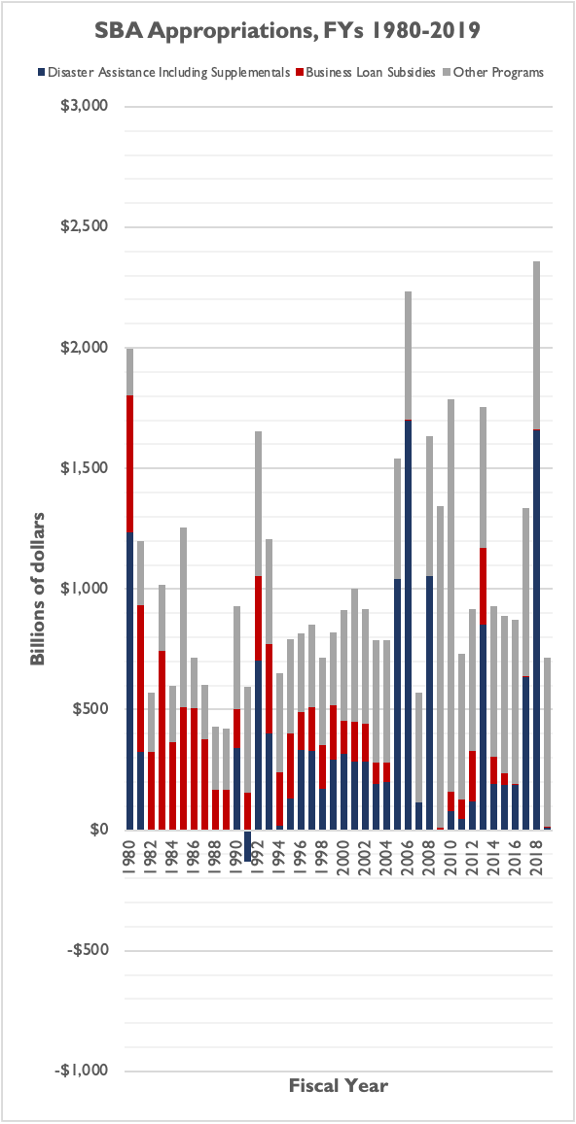 Then in March 2020, Congress created the Paycheck Protection Program (PPP), which provided hundreds of billions of dollars in forgivable loans to small and mid-size businesses. PPP typically enjoyed bipartisan support, and Congress passed several expansions and extensions of the PPP program through the 2020 calendar year.

As a result of these COVID-era laws, and as noted above, the SBA budget expanded at an unprecedented rate. In non-inflation adjusted terms, the budget grew more than one thousand fold from FY 2019 to FY 2020, to over $760 billion. The budget remained disproportionately high in FY 2021, at nearly $380 billion, and settled back down to $2.2 billion for the current FY 2022. 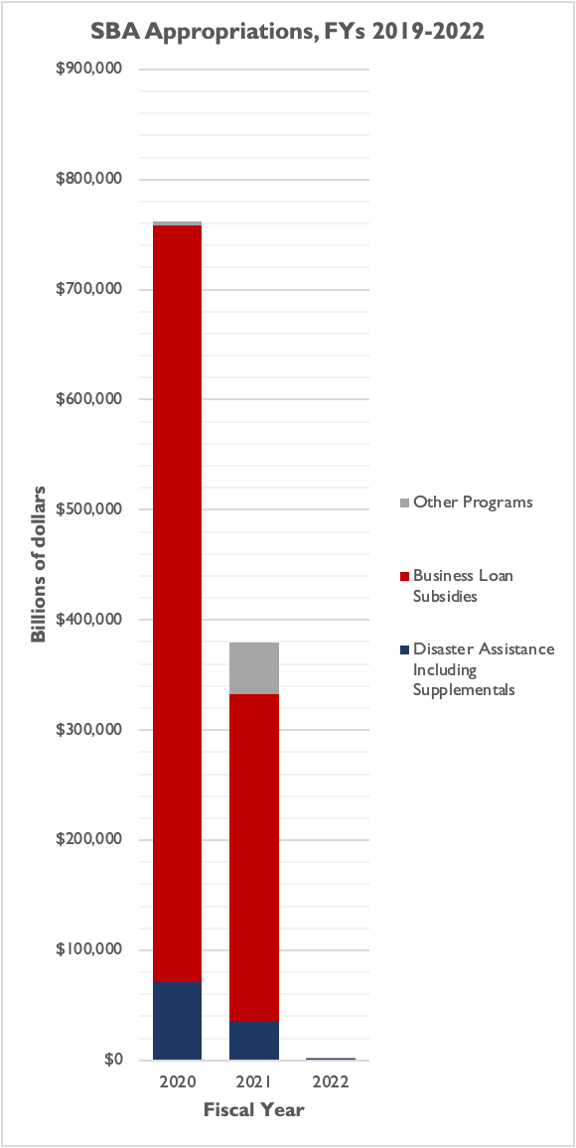 When Congress increases agency budgets like this, it is critical that lawmakers devote a portion of the funding increases to each agency’s Office of Inspector General (OIG). The OIG plays a critical role in combating wasteful spending, monitoring fraud in government programs, and ensuring that agency leaders are carrying out their duties effectively, ethically, and as the law intends.

While the SBA OIG’s share of total SBA appropriations averaged more than 1.6 percent from FY 2000 through 2019, typically hovering between one and 2.5 percent of total appropriations, that share plummeted to 0.01 percent in 2020 and 0.02 percent in 2021. Congress grew SBA’s resources more than 1,000 times, but only tripled the OIG budget. 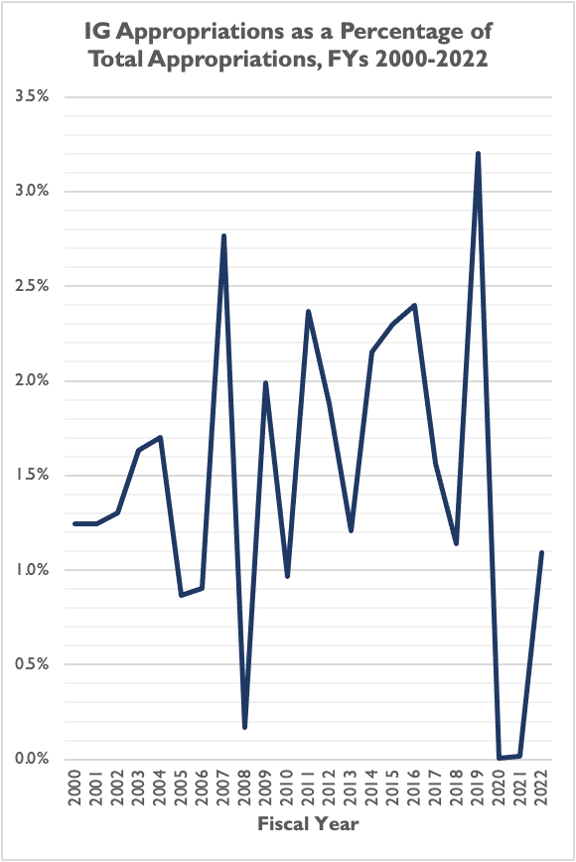 This is not to suggest that the relationship between agency funding and OIG funding should always be linear. However, Congress should not be surprised that experts are calling PPP “the biggest fraud in a generation” when lawmakers increased the agency’s budget by 1,000 while underfunding the watchdogs and experts who ensure taxpayer dollars do not go to waste.

And even if the SBA never again sees a budget like they had during the height of the COVID-19 pandemic, some lawmakers have planned for a significantly expanded role for the agency in the very near future. Congressional Democrats included $5 billion in 10-year funding for SBA in their Build Back Better Act (BBB; H.R. 5376), creating or expanding more than a dozen different programs.

To put that in context, the Congressional Budget Office (CBO) projected last year that for the same 10-year period (FYs 2022-31) Congress would appropriate around $10.9 billion to SBA. In other words, BBB proposals would increase SBA funding by more than 46 percent over a 10-year window.[3] 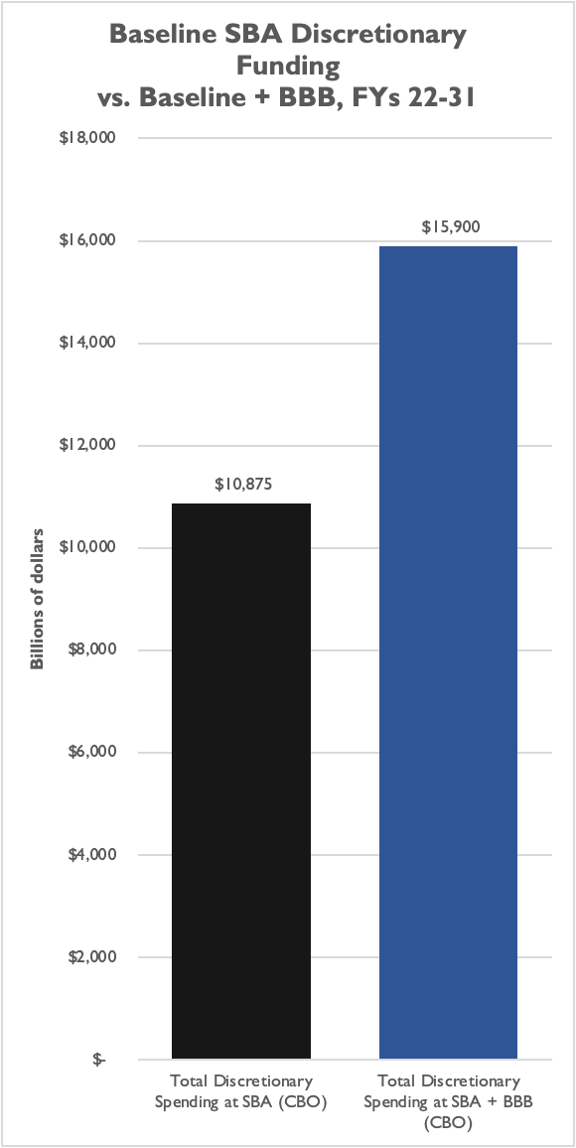 To track all of that additional proposed spending, BBB would give SBA OIG just $13 million over 10 years. That’s only a four-percent increase over what CBO currently projects OIG to spend from FYs 2022-31.

While the Improve the SBA Act would not provide additional funding to OIG, it includes several provisions that would require the agency to home in on current and future OIG recommendations. The legislation also does not appropriate new dollars to SBA, instead pushing the agency to focus on improving current programs under current funding levels.

Overall, this thoughtful piece of legislation is a good starting point for efforts to reform an agency that received nearly $1 trillion in taxpayer dollars over just two years.

[1] NTU pulled SBA’s funding history from Table I and the Appendix in this Congressional Research Service (CRS) report.

[2] CRS has more details on current and past SBA programs here.

[3] NTU pulled CBO projections for regular SBA discretionary funding – which does not include BBB proposals – from the July 2021 “Spending Projections, by Budget Account” here.