House Democrats announced on Friday that they would vote on a six-bill minibus appropriations package for fiscal year (FY) 2023 during the week of July 11. NTU calculations indicate the bill would raise spending levels $49 billion, or 14.1 percent, over FY 2022 enacted legislation. The six-bill minibus would raise spending levels $11.5 billion, or nearly three percent, over levels requested by President Biden earlier this year.

The six-bill minibus, H.R. 8294, contains half of the 12 regular appropriations bills considered by Congress each year: Agriculture, Energy and Water (E&W), Financial Services and General Government (FSGG), Interior and Environment, Military Construction and Veterans Affairs (MilCon-VA), and Transportation and Housing and Urban Development (T-HUD). In FY 2022, these bills made up $350 billion, or just 24 percent, of total base discretionary spending.[1]

The Biden administration proposed spending $38 billion more across these six appropriations bills in their FY 2023 budget request, for a total of $388 billion or 11 percent more than FY 2022 enacted levels.

House Democrats have taken the Biden administration’s request and added even more spending – a total of $399 billion across the six bills, or $49 billion (14.1 percent) more than FY 2022 enacted levels. The largest increase – on a nominal and relative basis – goes to the Military Construction and Veterans Affairs bill. 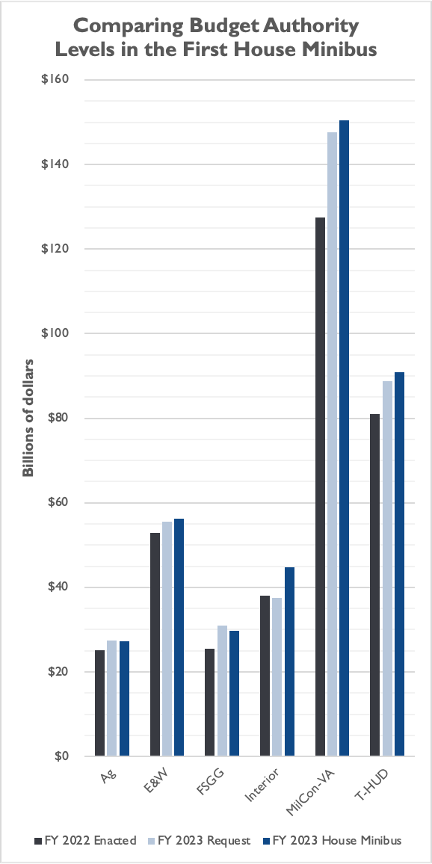 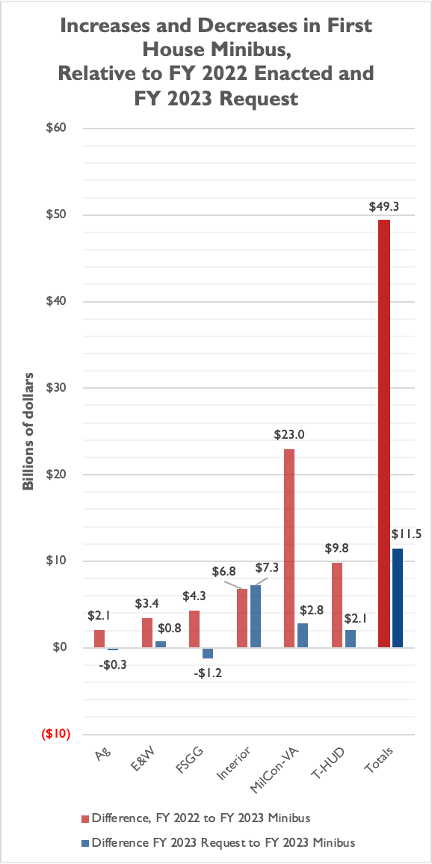 Importantly, this minibus if enacted will have pernicious and long-term effects on the nation’s debt and deficits. While the bill adds tens of billions of dollars to the deficit in FY 2023 – since the spending increases outlined above are not paid for – the increases will also create new and higher baselines for FY 2024. Since discretionary spending rarely goes down from year to year, this year’s $50 billion increase could set the table for hundreds of billions of dollars in additional spending over the next decade.

Congress should scrap these bills and start from scratch, with a goal of limiting spending increases in each of the six appropriations bills or even reducing spending relative to FY 2022 enacted levels.