The 10-year Budget Control Act (BCA) era is coming to an end on October 1, 2021, after running from the beginning of fiscal year (FY) 2012 through the end of FY 2021. The BCA put in place 10 years of discretionary spending caps, and at the time was a meaningful (if modest) effort to rein in runaway federal spending and bring debt and deficits under control.

It does not take a budget expert to know that debt and deficits are not under control generally speaking nor compared to just 10 years ago. In fact, now that the BCA era is coming to an end, we can offer a final verdict on the discretionary spending caps the law put in place: Congress cheated taxpayers to the tune of $2.7 trillion over 10 years. That’s almost $19,000 per taxpayer in America.

Lawmakers had two primary methods for cheating the caps: 1) raising the caps with a number of bipartisan budget deals over the 10-year period, and 2) authorizing spending above the caps for war spending or emergencies.[1]

The latter category made up the bulk of Congressional cheating of the caps: more than $1.9 trillion, or 70 percent, came from authorizing three kinds of spending above the caps:

The remaining $800 billion in cheating came from raising the caps through budget deals that had widespread support from Democrats and Republicans on Capitol Hill, and from former Presidents Obama and Trump. The concept of defense and non-defense “parity” over the years often meant that defense and non-defense spending would receive roughly equal boosts in order to grease the skids for bipartisan budget deals. The loser in this process, of course, was the American taxpayer.

Why $800 billion? (Or $808 billion to be precise). That’s the difference between the final spending caps for each fiscal year in the BCA window and the caps as envisioned under the auto-enforcement provision that went into effect in January 2012, when Congress failed to reach a 2011 compromise on deficit reduction.

Here’s how that looks over each year in the BCA era: 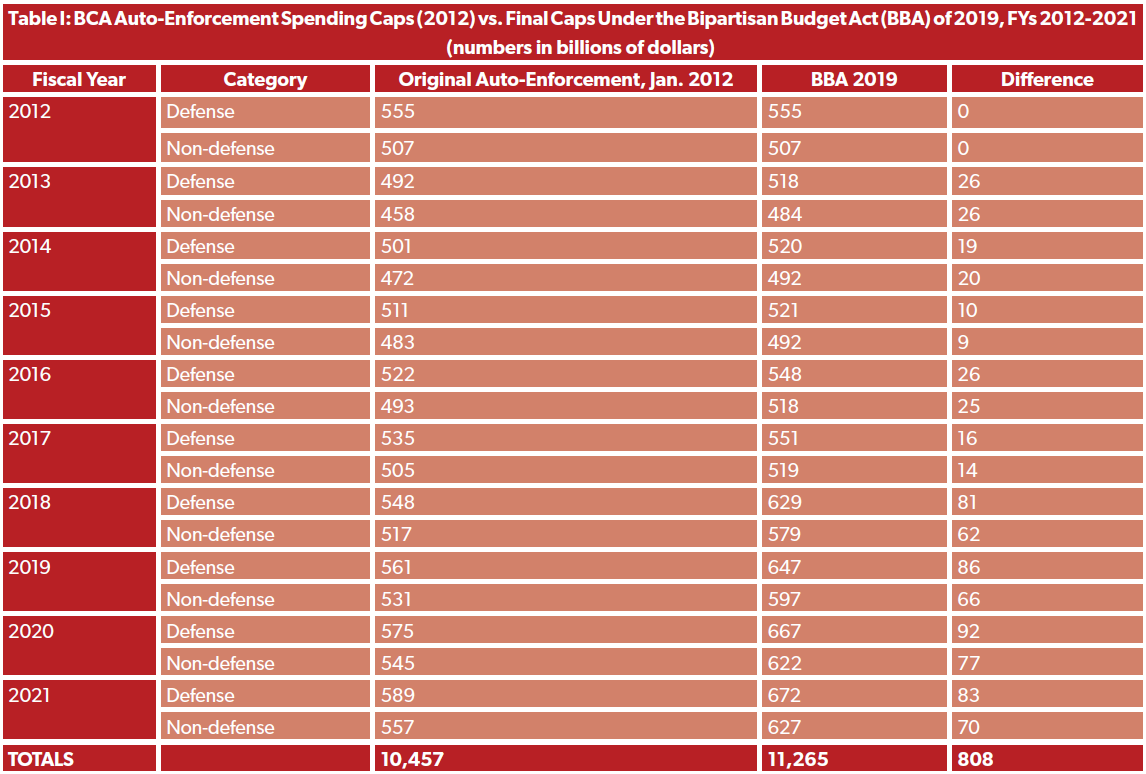 And what of the $1.9 trillion in emergency or war spending? The following table breaks out each year by category, with an additional column noting the proportion of OCO spending that went to base, enduring, or non-war costs from FYs 2015 through 2021:

And, visualized in a bar chart, here is how each cap was adjusted over the 10-year window: 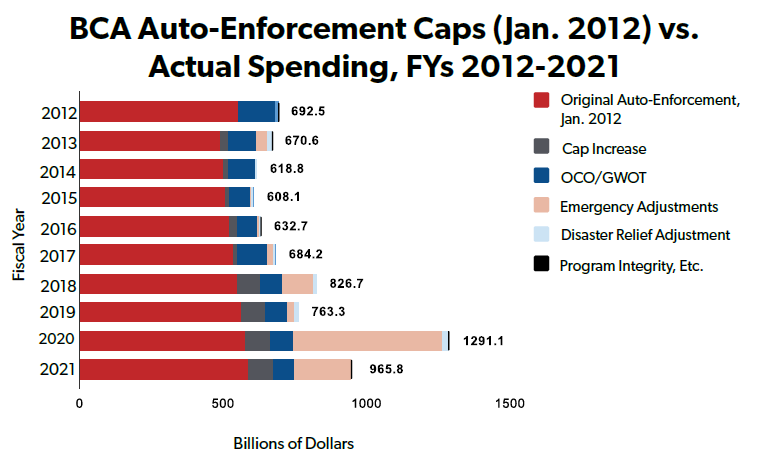 One response to this analysis might be that the $1.9 trillion in spending above the caps was for genuine emergencies, and therefore is above (if not beyond) critique. A few counterpoints:

NTU has long documented how lawmakers redefine what makes for an “emergency” spending need, and perhaps the costliest abuse has been in the OCO slush fund.

Change and tighten the definition of “emergency” spending: The 2011 BCA defines an “emergency” requirement as one that “(A) requires new budget authority and outlays (or new budget authority and the outlays flowing therefrom) for the prevention or mitigation of, or response to, loss of life or property, or a threat to national security; and (B) is unanticipated.” The BCA then defines “unanticipated” as “sudden,” “urgent,” “unforeseen,” and “temporary.” Congress has regularly abused this definition, though, for non-emergencies. Two recent examples from both sides of the aisle: 1) Democrats proposed $20 million for the National Endowments for the Arts (NEA) and Humanities (NEH) as an “emergency requirement” in their HEROES Act, “for grants to respond to the impacts of coronavirus”; this is on top of $75 million allocated under the CARES Act, more than a third of the total NEH/NEA appropriation for FY 2020. 2) Republicans proposed $1.75 billion for a new FBI headquarters as an “emergency requirement” in their HEALS Act. As NTU noted at the time, “a new HQ is neither an ‘emergency’ nor a proper inclusion in a legislative package focused on COVID-19.” Though the issue here may be more about Congressional enforcement of the “emergency” definition than the definition itself, possible changes to the definition Congress could consider are: 1) eliminating the loss of property from the definition of an “emergency” (property losses as a result of natural disasters could be covered under the “disaster relief” category exempt from the caps); 2) expanding the definition to eliminate potential abuses, such as specifying that emergency requirements cannot have been planned or requested prior to a certain date before the emergency (i.e., the new FBI HQ) or capping emergency spending in an existing account at a certain percentage of regular appropriations (i.e., the NEH/NEA). With reforms such as these in place, military emergencies that might have formerly been funded under OCO (along with a great deal of unnecessary spending) could face more prudent tests going forward.

Unfortunately many of the spending breaches of the last 10 years were agreed to on a widespread, bipartisan basis and -- as noted above -- took place under Democratic and Republican presidents, and under Congresses controlled by Democrats and Republicans. This has been a bipartisan, trans-ideological problem over the past 10 years. Given how closely divided the 117th Congress is, lasting solutions will require buy-in from both Democrats and Republicans. NTU and NTU Foundation have some roadmaps to get lawmakers there.

Members like Sens. Lee and Braun on the Right, and Reps. Carolyn Bourdeaux (D-GA), Ed Case (D-HI), Kurt Schrader (D-OR), Stephanie Murphy (D-FL), and Dean Phillips (D-MN) on the Left, have shown a commitment to achieving debt and deficit reduction after a significant spending response to the COVID-19 crisis. The hard work must start now.

[1] How Congress defines an “emergency” can be problematic for taxpayers. More on that below.

[2] NTU estimated this figure would be $164 billion from FYs 2015 through 2021 in our 2020 report on abuse of the OCO fund. An uncertainty in that estimate was whether the DoD FY 2021 budget request for base and enduring spending in OCO in FY 2021 would be authorized and approved by Congress. By and large, the request was authorized, and DoD reported in its FY 2022 budget that FY 2021 enacted base and enduring spending in OCO was $50.5 billion, leaving the total of OCO spending for base, enduring, and non-war requirements at $165.5 billion from FYs 2015 through 2021.

[3] This assortment includes program integrity measures, a one-time Census spending boost, and more. For more see the latest sequestration report from the Office of Management and Budget.