Prepared for
The Office of the U.S. Trade Representative

Regarding Docket Number USTR-2019-0004, request for comments regarding proposed modification of the action being taken in the Section 301 investigation of the acts, policies, and practices of the Government of China related to technology transfer, intellectual property, and innovation.

Founded in 1969, National Taxpayers Union (NTU) is the “Voice of America’s Taxpayers.” We fight to ensure that all Americans are able to pursue their dreams without the heavy hand of government holding them back. Our comments on proposed new Section 301 tariffs are based on the fact that tariffs are, by definition, taxes on imports, and they are paid by Americans. Because tariffs distort the economy and empower the government to pick winners and losers based on their political clout, economists are nearly unanimous in their opposition to trade barriers.

Section 301 Tariffs Are Failing To Achieve Their Primary Policy Objectives

The goal of the Section 301 tariffs is to deal with acts, policies, and practices of China that are unreasonable or discriminatory and burden or restrict U.S. commerce. So far, tariffs have not been an effective tool to achieve these goals.

According to a November 20, 2018 USTR report: “China fundamentally has not altered its acts, policies, and practices related to technology transfer, intellectual property, and innovation, and indeed appears to have taken further unreasonable actions in recent months.”[1]

And according to the March 2019 Economic Report of the President: “The first Section 301 action applied an additional 25 percent ad valorem tariffs to Chinese imports worth $34 billion in 2017 import value and took effect on July 6. A second tranche consisted of an additional 25 percent tariffs on a further $16 billion in 2017 imports from China, taking effect on August 23. Rather than changing its practices, China announced retaliatory tariffs on U.S. goods.”[2]

Since then, China has continued to take new actions detrimental to U.S. exports and investments in response to Section 301 tariffs.

NTU estimates that an additional 25 percent tax on $300 billion in imports from China would bring the total direct cost to U.S. taxpayers resulting from Section 301 tariffs to at least $91.6 billion.[3]

In real dollars, this would represent the largest tax increase imposed on Americans since the conclusion of World War II.

Tariffs of this magnitude would cost the average U.S. household $718 per year. Clearly, such an increase would inflict disproportionate harm on American taxpayers. 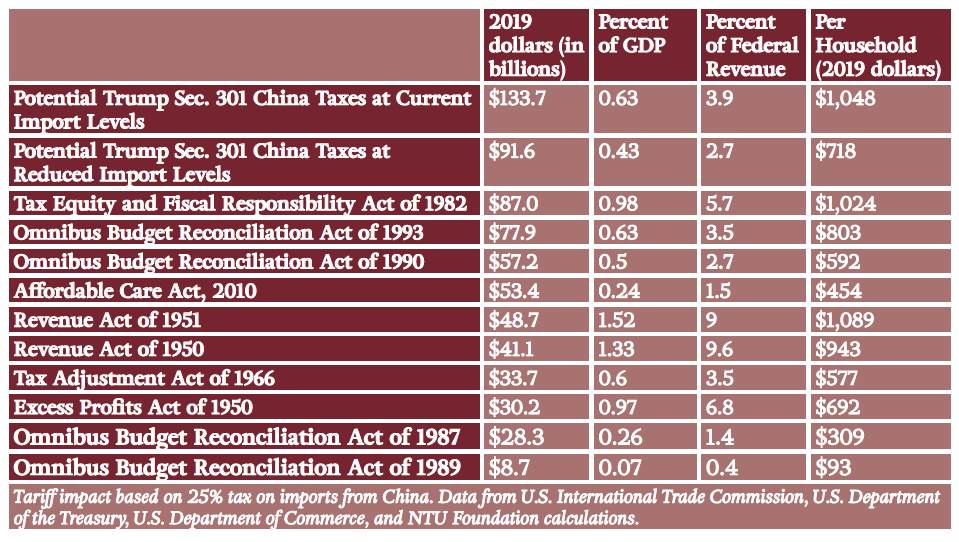 USTR Should Not Attempt to Pick Winners and Losers

Many small businesses across the United States do not have the time, knowledge, or resources available to secure a timely exclusion from tariffs. A review of exclusion requests shows a who’s who of elite -- and expensive -- DC law firms weighing in: Wiley Rein, Greenberg Traurig, Hogan Lovells, Sandler, Travis and Rosenberg, Covington & Burling, Holland & Knight, Mayer Brown, etc. This process imposes a disproportionate burden on American businesses that either have to wing it by filing an exclusion request on their own and hoping for the best, or else taking money they could have used to create new jobs and instead using it to hire expensive legal help.

USTR should focus its efforts on reducing barriers to trade and investment, not attempting to pick and choose which companies are burdened with new taxes and which are not. Senator Ron Johnson (R-WI) has suggested that due to the exclusion process for Section 232 tariffs “...the Commerce Department is now der kommissar.”[6]The same concern applies to the Section 301 exclusion process.

If new tariffs are imposed, the administration should issue a blanket exemption to U.S. small businesses, which would reduce the economic damage from new taxes while greatly reducing the workload facing USTR in evaluating future exclusion requests. There are a number of ways such an exemption could be designed. For example, according to Census data, 89 percent of U.S. firms have fewer than 20 employees.[7]Whether defined by number of employees, sales volume, or other criteria, these small businesses could be exempted from tariffs entirely or other options could be created to ensure their interests are fully accounted for.

Last year, NTU released a letter signed by more than 1,100 U.S. economists, including 15 Nobel laureates and officials who have served in Republican and Democratic administrations.[8]Their letter included these prescient observations:

As economists foresaw, new U.S. tariffs have increased prices for American consumers. This cost would be greatly exacerbated if new tariffs on shoes, clothing, toys, electronics, school supplies, and other products were to be imposed. American farmers and ranchers have lost export opportunities as a result of Section 301 tariffs and the resulting retaliation. And so far, U.S. tariff actions have reinforced or even exacerbated foreign trade barriers instead of reducing them.

We agree with Ambassador Lighthizer: “Protection of intellectual property is not anti-Chinese. Stopping people from forcing transfer of technology is not anti-Chinese. In fact, the reformers would say it's pro-Chinese. It will help their economy, not hurt their economy.”[9]But there are ways to promote these changes that do not hold U.S. taxpayers hostage to the uncertain outcome of trade negotiations. Other possible methods to encourage modernization by China include leading by example by approving new trade agreements like the U.S.-Mexico-Canada agreement (USMCA) and joining existing agreements with countries other than China; improving the Generalized System of Preferences (GSP) program to facilitate the production of shoes and clothing in countries other than China; and working more closely with our allies who share many U.S. concerns.

The Federal Register notice requesting comments on new Section 301 tariffs included this important statement: “The Trade Representative's decision to modify the September 2018 action takes into account the extensive public comments and testimony.” In prior Section 301 hearings, fewer than 20 percent of those who testified endorsed tariffs. As you have seen and heard, the overwhelming majority of comments that have been submitted to USTR in response to the most recent request also oppose the imposition of new tariffs. I urge you to take them into account.

New tariffs would represent a significant tax increase on American families, eradicating much of the gains achieved in last year’s tax-cutting legislation. Moreover, the overall economic costs would be even higher than the direct tax impact. Considering exclusion requests on a case-by-case basis is not an effective way to ameliorate these costs. I hope you will accept the advice provided last year by hundreds of U.S. economists who explained: “A higher level of protection would raise the cost of living and injure the great majority of our citizens.”

[2]Council of Economic Advisers. (2019). Economic Report of the President.

[4]Tempalski, Jerry. U.S. Department of the Treasury, “Revenue Effects of Major Tax Bills,” OTA Working Paper 81, September 2007; Estimated Revenue Effects Of The Amendment In The Nature Of A Substitute To H.R. 4872, The “Reconciliation Act Of 2010,” As Amended, In Combination With The Revenue Effects Of H.R. 3590, The “Patient Protection And Affordable Care Act (‘PPACA’),” As Passed By The Senate, And Scheduled For Consideration By The House Committee On Rules On March 20, 2010, Joint Committee on Taxation, JCX-17-10, March 20, 2010; Congressional Research Service, “Trump Administration Tariff Actions: Frequently Asked Questions,” February 22, 2019; Bureau of Labor Statistics, and authors’ calculations. PPACA tax increase based on annual average of estimated revenue impact from FY 2011 through FY 2019.