Congress has appropriated trillions of dollars in the past few months to economic and public health measures meant to combat the COVID-19 (coronavirus) pandemic. Though the U.S. may be far from defeating the virus, there will come a time in the near future when policymakers will have to grapple with the enormous additions they have just made to the federal debt.

As federal lawmakers look to offset recent and future COVID-19 spending, one of the first places they should explore is the Overseas Contingency Operations (OCO) account. The OCO account, which has allowed the Departments of Defense (DoD) and State to spend above the decade-long discretionary spending caps enacted under the Budget Control Act (BCA) of 2011 (and even subsequent increases to BCA caps), has increasingly become a source for “base” DoD spending and for “enduring” costs expected to last beyond the Global War on Terror.

From September 11, 2001 through the end of fiscal year (FY) 2019, Congress appropriated over $2 trillion “in support of the broad U.S. government response to the 9/11 attacks and for other related international affairs activities.” Lawmakers made these appropriations through either the OCO/Global War on Terror (GWOT) designations or the looser emergency spending designation that preceded OCO/GWOT from 2001 through 2008.

However, in recent years an increasing share of OCO/GWOT appropriations are actually dedicated to either “base” requirements that would normally be included in DoD’s regular budget request or “enduring” requirements that are expected to outlast the immediate contingency operations OCO was designed to fund. (Throughout this paper, "base" spending refers to DoD's annual discretionary budget.)

Congress, for its part, has made it easier for DoD to use OCO for base and enduring requirements by passing budget deals that authorize OCO amounts well above and beyond what are needed for contingency operations. Ahead of the FY 2017 budget debate, the Obama administration was supposed to release a plan for transitioning enduring costs in the OCO budget to the base budget. DoD officials declined to submit the plan, though, “since the fiscal year 2017 budget was developed so as to be consistent with the Bipartisan Budget Act of 2015, which increased the amount of enduring costs funded in OCO.”

Lawmakers in both parties and stakeholders across the ideological spectrum are interested in reforming OCO and reducing appropriations dedicated to the OCO account. Progressives like Reps. Barbara Lee (D-CA) and Ilhan Omar (D-MN) have proposed decreasing or eliminating OCO funding, while conservatives like Sens. Mike Enzi (R-WY) and Rand Paul (R-KY) have proposed drawing down OCO budget authority over several fiscal years. Recent National Defense Authorization Acts (NDAAs), which almost always pass with bipartisan support, have included requirements for DoD to report on enduring costs funded through OCO and have sought to clarify the roles of inspectors general (IGs) in overseeing OCO funds.

Reformers have a long way to go, though. The upcoming FY 2021 NDAA will likely include $69 billion for OCO, which is the statutory cap for security-related OCO funds passed by Congress in the Bipartisan Budget Act (BBA) of 2019. Unfortunately, that figure is much too high. It is not too late, though, for Congress to include more reporting requirements for DoD and its OCO spending in FY 2021 and beyond. In a post-BCA world, lawmakers also need to look at how to properly cap OCO funds starting in FY 2022.

The Scope of the Problem: A Look at the Last Two Decades of OCO

Based on existing research compiled by the Congressional Research Service (CRS) through FY 2019, FY 2020 appropriations bills passed by Congress, and the FY 2021 BBA target for OCO funding, it is estimated that by September 30, 2021 Congress will have appropriated more than $2.1 trillion to the OCO/GWOT or emergency designations for the Global War on Terror. 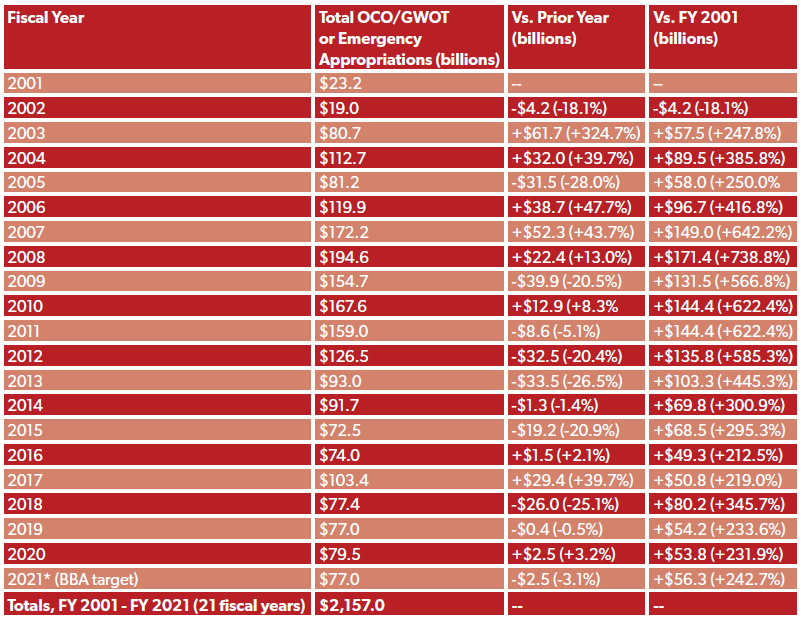 More troubling though, is that in the last six fiscal years Congress has appropriated OCO funds for three categories of spending that fall outside the more limited definition of contingency operations that many feel Congress and DoD should be following for its OCO spending: 1) base requirements; 2) enduring requirements; 3) the European Deterrence Initiative (EDI) and other “non-war” costs. Below is a breakdown of that spending, along with DoD’s FY 2021 request for these three categories.

In total, that is $164 billion that should have been made to compete with other priorities in DoD’s base budget (not to mention the rest of the federal budget), which, unlike the OCO account, was subject to BCA discretionary spending caps from FYs 2012-2021. Instead, Congressional appropriators have managed to stuff an additional $164 billion in taxpayer funds to DoD that should have been subject to spending caps. The table above indicates the problem is getting worse, not better, with time.

As mentioned earlier, stakeholders may have to wait for the situation to improve. Because the BBA of 2019 established a $77-billion target for OCO in FY 2021, DoD and the State Department can be expected to request up to the maximum amount for FY 2021. Congress can largely be expected to give the agencies what they are asking for. (Note the problem above with DoD’s scrapped plan to phase out OCO spending from FYs 2017-2020.)

That does not mean Congress cannot act now, though, to rein in OCO for FY 2022 and beyond. Below is a menu of policy recommendations, some small and some very large, to reform OCO. Most are mutually exclusive, meaning they can be enacted in tandem, but some involve making a choice between one policy and another. At NTU we are fairly agnostic as to the direction policymakers take, as some involve tradeoffs for military officials beyond the scope of NTU’s expertise. We note that it is paramount, though, for Congress to put a stop to the practice of stuffing unrelated base and enduring funds into the OCO account when they belong in the regular DoD or State Department budget. Just as every federal agency, state government, business, and household has to tighten their belts in an extraordinarily challenging economic environment, DoD needs to do the same. OCO is a great place to start.

Below are 10 policy recommendations for lawmakers to reform and, eventually, replace OCO. Six policy recommendations are ‘low-hanging fruit’ for the immediate future, and we believe they can be included and implemented in the FY 2021 National Defense Authorization Act (NDAA). Lawmakers in the House and Senate are currently working on the FY 2021 NDAA, with initial drafts from Armed Services Committee leaders due out later this spring.

The other four options are likely not realistic inclusions in the FY 2021 NDAA, but should be considered for FY 2022 and beyond. They are more extensive and disruptive reforms to OCO, and would spark intense debate among policymakers across the ideological spectrum - debate that could, in this challenging legislative environment, distract from the prospect of more achievable gains over the nearer term. Nonetheless, we believe all would be an improvement over the OCO status quo.

The work on OCO reform does not stop with this year’s NDAA debate. Beyond FY 2021, lawmakers need to think about phasing the OCO fund down for good. They should even consider an alternative mechanism for funding the military’s contingency operations, one more in line with historical precedents for emergency spending. Below are four major reform options. The first two can be combined with any of the other options, but lawmakers would have to choose between options three and four (establishing an OCO reserve vs. funding contingency operations through supplemental appropriations and/or “emergency” designations). We consider each in turn below.

Conclusion: Reforming OCO is A Better Deal for Taxpayers, Watchdogs, and the Military

The above reform options range from minor to significant, but each of them would improve transparency and accountability in OCO spending. This will benefit taxpayers, who have forked over tens of billions of dollars to OCO for needs that should be met in the capped discretionary defense budget. It will benefit watchdogs, who can better keep track of waste, fraud, and abuse through the base budget. Lastly, we believe OCO reform will benefit the military, by forcing Pentagon leaders to answer tough questions about priorities for a 21st-century military and to  disclose more about current and future costs for contingency operations around the globe.