A recent study from the Coalition for a Prosperous America (CPA) criticizes the assumptions used in traditional trade models for being “in many instances unrealistic.”[1] CPA proposes a set of alternative assumptions to conclude that massive tariff hikes would boost the U.S. economy. However, the CPA model’s results are highly flawed and completely unrealistic.

CPA modified the assumptions in one of the most widely used trade models, the Global Trade and Analysis Project (GTAP) model, to allow U.S. output and employment to increase in response to tariff hikes.

That would be quite an achievement, considering the fact that there are only 6 million unemployed people in the United States.[2]

The more likely result of adopting CPA’s trade model would be a devastating trade war, a possibility the model fails to account for.

This is because nearly every country in the world would inevitably retaliate against the United States by imposing tariffs on U.S. exports. The infamous 1930 Smoot-Hawley Tariff Act and more recent tariff increases under President Trump provide two prominent examples of how U.S. tariffs provoke foreign retaliation.

In 1930, President Herbert Hoover signed the Smoot-Hawley Tariff Act, legislation that increased U.S. tariffs to the highest level in the 20th century. The Smoot-Hawley tariff increase ignited a global trade war as other countries retaliated against U.S. exports.[3]

According to trade economist Doug Irwin, “Perhaps the most important ramification of the Smoot-Hawley tariff was its role in triggering retaliation against U.S. exports.”[4] The Senate Historical Office describes Smoot-Hawley as “a disaster. Even before its enactment, U.S. trading partners began retaliating by raising their tariff rates, which froze international trade.”[5] Sen. Reed Smoot (R-UT) was especially interested in protecting Utah sugar beet farmers and wool producers from imports, but the logrolling needed to secure passage of the bill led to higher tariffs on hundreds of products used by Americans.[6]

More recently, U.S. tariffs imposed by President Trump also triggered retaliation against American-made goods. At the time, Peter Navarro, Director of Trade and Manufacturing Policy for President Trump, predicted: “I don’t believe any country in the world will retaliate” against U.S. tariffs.[7] He couldn’t have been more wrong, as nearly every country in the world retaliated.

One goal of tariffs is to increase the price American consumers and businesses pay for imports. By this measure, tariffs were a big success. As just one example, new tariffs on baby cribs hurt the ability of charities to provide cribs to low-income families. According to Chellie McLellan, the CEO of Healthy Homes Block by Block: “When you get an email saying directly, 'because of these tariffs, these most at-risk babies will not have a safe sleep option,' it’s a wake-up call.”[8] Similar costs were imposed on Americans throughout the country. For example, a 2020 study of the trade war’s impact concluded that in most sectors of the economy, the cost of tariffs was entirely passed on to U.S. firms and consumers.[9]

The inevitable retaliatory tariffs that followed hit American farmers and ranchers especially hard. More than 800 U.S. food and agricultural products were targeted by retaliatory tariffs from China, the European Union, Turkey, Canada, and Mexico.[10] The U.S. Department of Agriculture calculates that the trade war cost farmers and ranchers $27 billion in lost exports from mid-2018 to the end of 2019.[11]

Trump-era tariff increases were tiny compared to those proposed by CPA, but their impact was large. Various economic studies have estimated that the U.S. and foreign tariff increases wiped out $1.7 trillion in stock market capitalization and reduced U.S. gross domestic product (GDP) by billions of dollars.[12]

The proposed CPA tariff increases would be much larger. In 2021, roughly one-third of U.S. imports came from FTA partner countries and two-thirds from the rest of the world. Based on that ratio, the CPA tariffs equal a 28 percent average overall import tax. That would be a whopping 25 percentage point increase from the current 3 percent weighted average U.S. tariff rate.[13] The immediate effect would be to increase U.S. tariffs to 10 times higher than the average world tariff rate.[14]

The CPA study allows higher prices and lower imports to stimulate local production. That is problematic, since in reality tariffs stimulate production in some industries at the expense of others.

But tariffs would increase the price of both imported and U.S-made t-shirts, leaving Americans with less money to spend elsewhere and reducing employment and wages in other parts of the economy. Fewer imports would also mean our trading partners would have fewer dollars to spend on U.S.-made exports or to invest in our economy. Jobs and investment dollars would be directed away from their most productive uses. That’s one reason studies of tariffs typically find that their costs outweigh their benefits.

One way to get around such results is to tweak the assumptions governing how the economy responds to tariffs.

For example, tariffs reduce U.S. exports to other countries, in part because they increase the price of American-made goods. Estimates of this relationship are typically empirically based, but CPA modifies the GTAP model to reduce the fall in exports in response to tariffs in half. According to CPA, exports are specialized in sectors like aerospace and software where U.S. companies dominate, and therefore U.S. exports are less price-sensitive than other nations’ exports.

In addition, CPA’s estimates about the responsiveness of capital and labor to price increase are very optimistic.

For example, if new tariffs caused Americans to stop importing shoes and companies responded by opening new shoe factories to capitalize on the protected U.S. market, they would need both money and workers.

CPA’s assumptions minimize this cost. In economic terms, CPA assumes that the supply of labor and capital is unrealistically elastic. For example, their model differentiates between skilled labor, with an elasticity of 0.5, and unskilled labor, with an elasticity of 0.75. These estimates appear to be based on Frisch elasticity, which reflects people’s willingness to trade off work and consumption over time.[17] An elasticity of 0.5 would mean that a one percent increase in wages would lead to a 0.5 percent increase in the labor supply.

However, other estimates of the responsiveness of labor to wage changes are much lower. For example, the Congressional Budget Office (CBO) has used an overall Frisch elasticity of labor estimate of 0.4.[18]

Their 0.9 percent elasticity of capital assumption is also quite high, and it is not clear how they arrived at this figure.

By modifying economic models to make it much less costly to expand the supply of capital, labor, and other factors when prices rise, it is possible to generate rosy results. These types of modifications require justification if the results are to be taken seriously.

It Would Be a Mistake, But Congress Does Have the Power To Raise Tariffs

What Do Other Economists Think?

Instead of uncritically accepting the results generated by economic models, U.S. policymakers should weigh them against centuries of economic guidance.

According to trade economist Jadish Bhagwati: “The fact that trade protection hurts the economy of the country that imposes it is one of the oldest but still most startling insights economics has to offer. The idea dates back to the origin of economic science itself.”[20]

The overwhelming economic consensus in opposition to protectionist tariffs is reflected in surveys from the Initiative on Global Markets (IGM) Economic Experts Panel:[21] 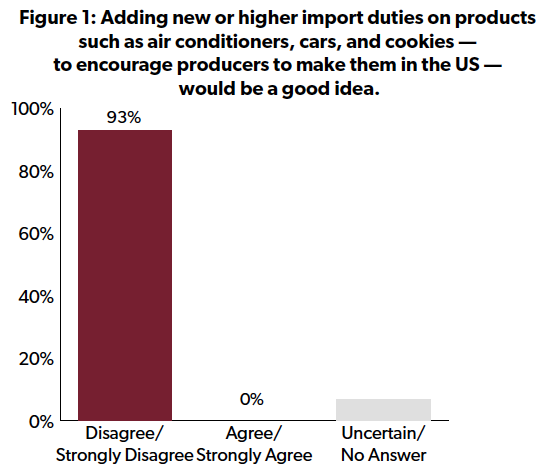 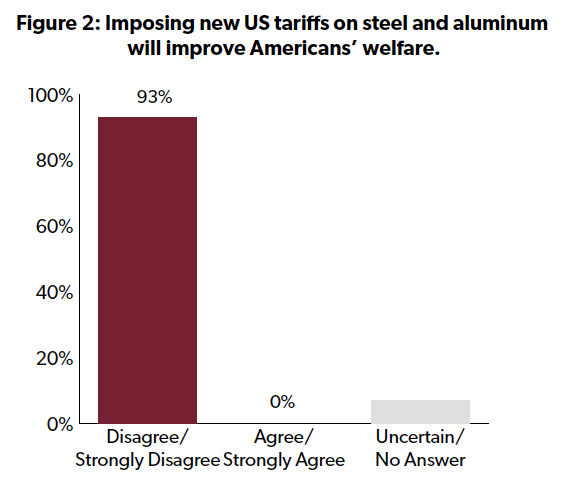 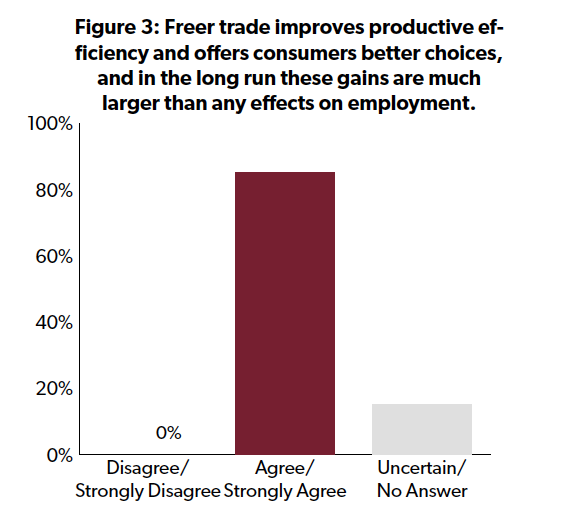 In response to the IGM question on steel and aluminum tariffs, Nobel laureate Oliver Hart replied: “A robust result is that free trade increases national income. The cases where this is not true are rare and hard to spot.” Nobel laureate Richard Thaler responded: “In net we want more trade not less.” Nobel laureate Eric Maskin commented: “I thought we had learned our lesson with Smoot-Hawley.”

Until recently, Prof. Maskin would have been correct. After World War II the United States successfully led efforts to reduce trade barriers in order to promote economic prosperity and world peace. The results have been impressive. Between 1994 and 2017, just prior to implementation of legislation securing U.S. participation in the World Trade Organization (WTO) and the North American Free Trade Agreement (NAFTA) and before Biden-Trump tariffs fully kicked in, average U.S. tariff fell significantly, foreign tariffs fell even more, and real median U.S. household income increased by 36 percent. 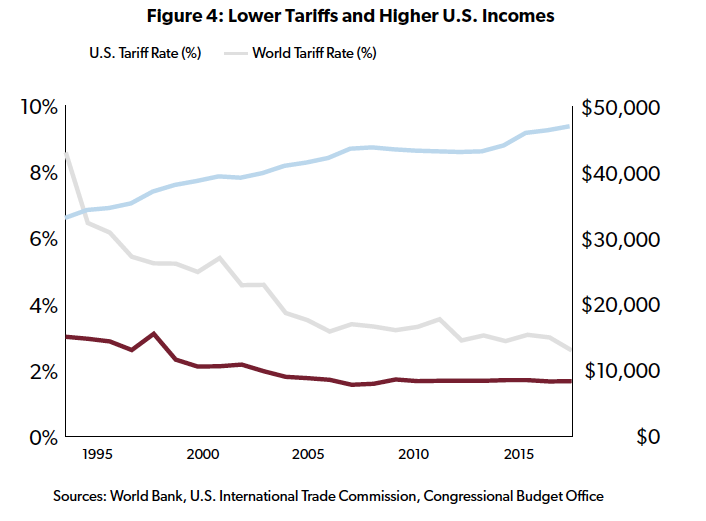 While economic theory and real-world data demonstrate the benefits of trade, the authors of the CPA models have shown that by changing the parameters of trade models it is possible to come up with results that radically diverge from established economic wisdom.

Since the CPA model is highly flawed and fails to consider the impact of retaliation that would inevitably result from massive U.S. tariff hikes on friends and allies including Japan, England, Germany, Canada, Mexico, and Korea, policymakers should consider a more realistic model.

Those who are old enough to remember the movie War Games may also recall the War Operation Plan Response (WOPR) program. That Hollywood simulation provides useful guidance for U.S. trade policy: In order to avoid a damaging global trade war that would inevitably result from aggressive tariff hikes, the winning move is not to play. At a time when inflation is the most important voting issue for Americans, Congress should not entertain the prospect of higher import taxes on goods needed by U.S. families and businesses.[23]

[9] Amiti, Mary, Redding, Stephen, and Weinstein, David E. “Who's Paying for the US Tariffs? A Longer-Term Perspective.” National Bureau of Economic Research, January 2020. Retrieved from: https://www.nber.org/papers/w26610.

[17] Chetty, Raj, et al. “Are Micro and Macro Labor Supply Elasticities Consistent? A Review of Evidence on the Intensive and Extensive Margins.” American Economic Review, May 2011. Retrieved from: https://dash.harvard.edu/bitstream/handle/1/11878970/Chetty_MicroMacro.pdf.