Just before the Labor Day holiday weekend, President Biden sent Congress a request to approve a total of $47 billion in new emergency spending on the Russian invasion of Ukraine, the COVID-19 pandemic, the spread of monkeypox, and natural disaster response in the U.S. If Congress approves Biden’s request, and they may this month, then lawmakers will have approved nearly $150 billion in emergency spending alone from January 2021 through September 2022, or an average of $900 for each household in America.

None of this emergency spending has been paid for with cuts to other parts of the federal budget, or even with increased taxes. This means, like many legislative and executive branch actions in Washington, that the new spending has been charged to the taxpayers’ credit card in the form of more debt.

Presidents often request, and lawmakers often approve, requests for emergency spending. There are emergencies that require the federal government’s attention every year in the U.S., including natural disasters, national security incidents, and public health threats. While policymakers cannot predict each and every emergency that will cross their desks in a given year, NTUF and its sister organization NTU have pleaded with Congress for years to set up mechanisms for more responsibly funding emergencies.

This tally of emergency spending is based on an NTUF review of laws enacted in the 117th Congress, which began in January 2021 and runs through December 2022. We included five laws enacted by Congress (full list below) and the Biden administration’s latest emergency spending proposal as reported by The Washington Post on September 2.

Emergency Spending Per Person and Per Household

Five already-enacted laws have green-lit a total of $98.4 billion in emergency spending, while the September 2022 Biden request – if approved by Congress – would add $47.1 billion to the total. 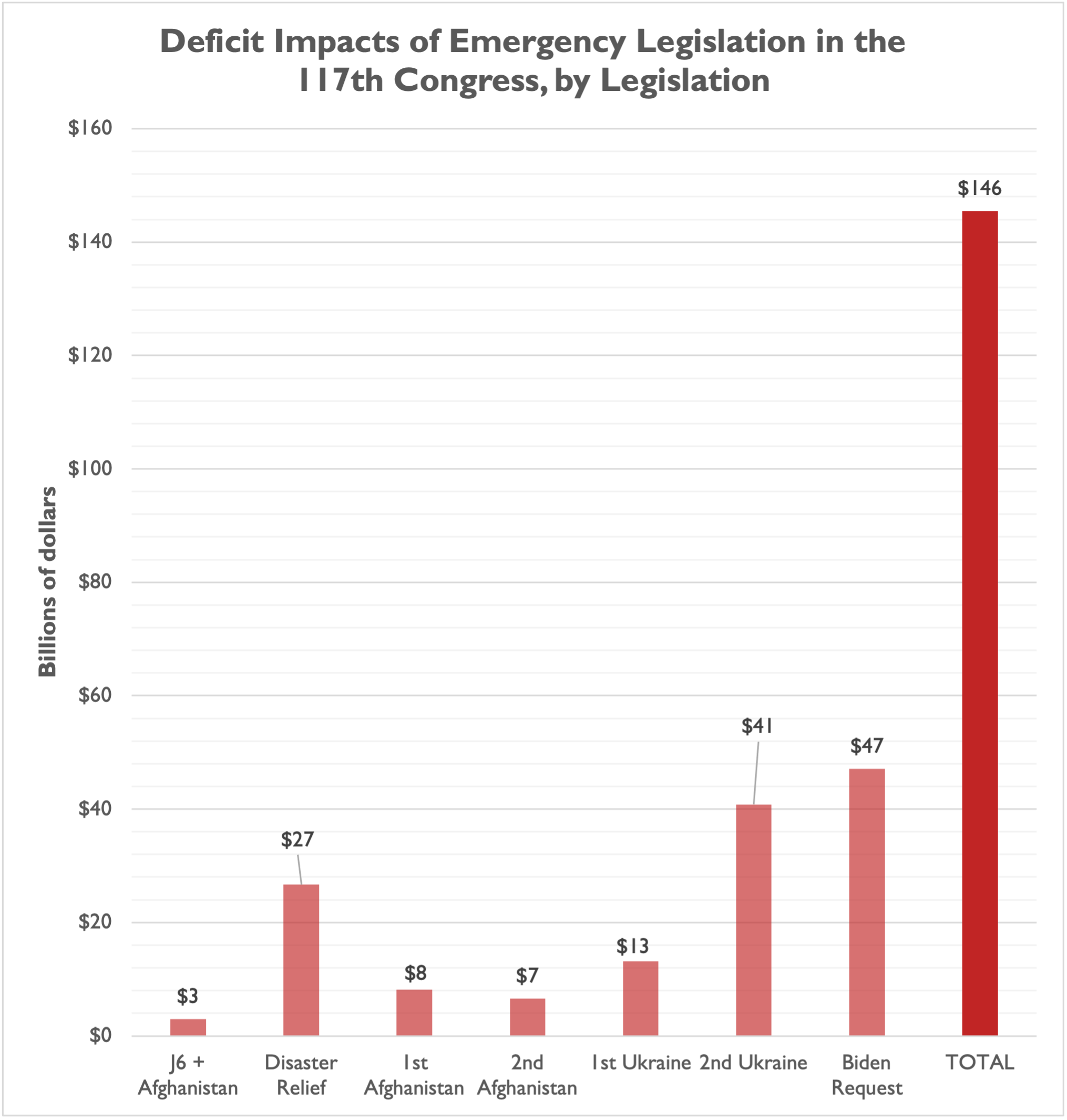 The total of $145.5 billion in emergency spending (which includes the $47.1 billion just requested by President Biden but not yet approved by Congress) would come out to $922.22 for each one of the 157 million households in America who pay federal income tax according to the most recent data available from the Internal Revenue Service (IRS).

Here’s the breakdown of the average household’s “tab” for each emergency bill: 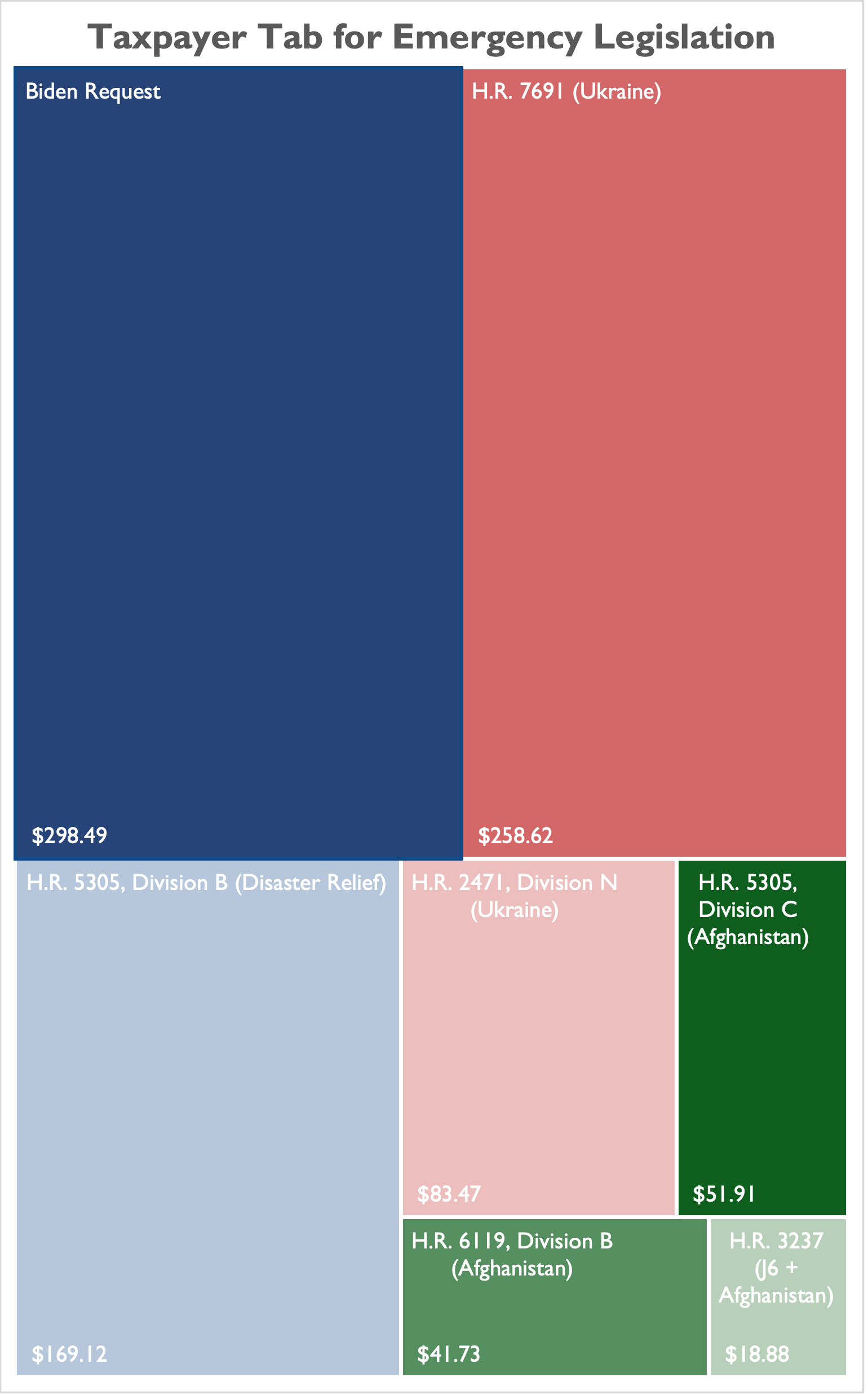 That’s a lot of deficit spending to accrue in just 21 months piled on top of $30 trillion in gross federal debt especially when Congress could have offset emergency spending with cuts to the regular budget or – as suggested above – actually had a ‘rainy day fund’ in place for such emergencies.

Congress has put its tens of billions of dollars in emergency spending since January 2021 on the taxpayers’ credit card and will likely do the same for the Biden administration’s latest proposal. As noted above, the total cost comes out to about $922 per household. Unfortunately, many of these households can’t afford to simply rack up debt to cover emergencies, as Congress is doing.

According to a January 2022 survey conducted by Bankrate, the majority of Americans (56 percent) cannot afford to cover an $1,000 emergency expense through savings alone. Ironically, Congress is doing what many of those 56 percent of Americans are doing – borrowing or charging the credit card for emergency situations. Given the superfluous waste and inefficiency throughout the federal government though, from commodity subsidies to the military budget to $281 billion in improper payments – lawmakers have no excuse for not covering the cost of emergency spending, unlike many Americans.