President Biden, Democratic lawmakers in Congress, and some budget experts have celebrated the fact that the Congressional Budget Office (CBO) projects the Inflation Reduction Act (IRA), which just became law, will reduce deficits by $100 billion over a decade – and closer to $300 billion if accounting for projected revenues from increased Internal Revenue Service (IRS) tax enforcement.

Even if that $300 billion in deficit reduction comes to pass though, it will represent under 12 percent of the more than $2.5 trillion policymakers added to 10-year deficits in the first 18 months of the 117th Congress under other major spending legislation. On net, even with the IRA, Congress and the Biden administration added more than $2.2 trillion to deficits with legislation passed from January 2021 through August 2022.

The largest contributor to deficits in the 117th Congress has been the American Rescue Plan Act (ARPA), which CBO projected would increase deficits by $1.1 trillion in fiscal year (FY) 2021, another $528 billion in FY 2022, and $1.8 trillion over 10 years total.

Last year’s infrastructure law (H.R. 3484, or the IIJA) and this year’s veteran’s health bill (H.R. 3967, or the PACT Act) collectively added another $533 billion to deficits. The semiconductor subsidy legislation (H.R. 4346, or CHIPS Plus Science) added another $79 billion. And supplemental spending bills for Afghanistan and Ukraine added tens of billions more.

This makes the IRA’s deficit reduction appear insignificant by comparison, not just a drop in the bucket for debt and deficit levels overall but a small portion of the deficits added by the same policymakers over the prior 18 months. 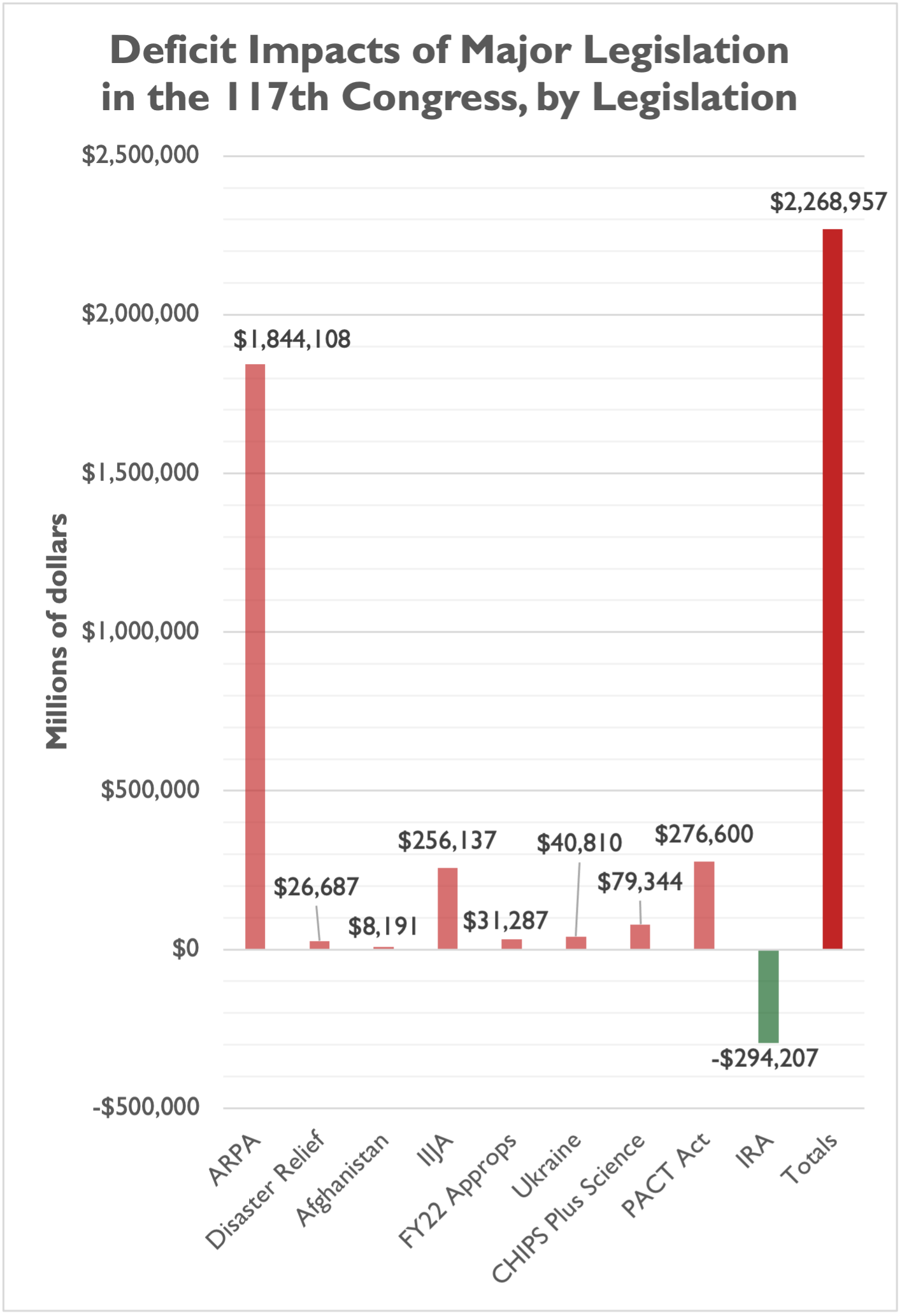 Even the significant deficit reduction in the later years of the IRA – specifically, FYs 2027 through 2031 – is virtually wiped out by the deficit increases in the IIJA and the PACT Act. 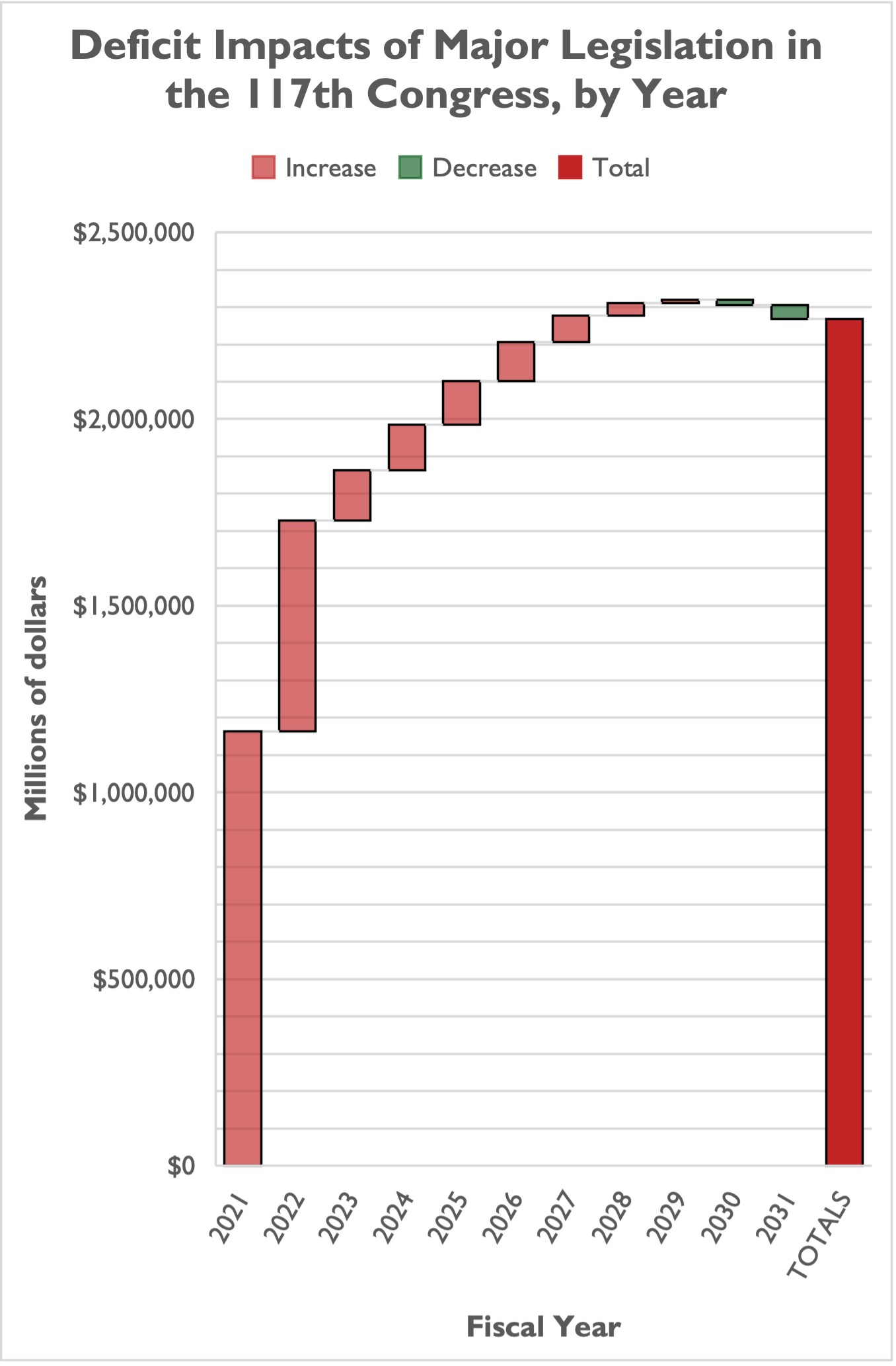 What’s worse, the above is an arguably charitable view of increased deficits over the next 10 years. The IRA:

Proper treatment of the rebate rule gimmick, or IRS failure to bring in the revenues anticipated from enforcement, or permanent expansion of ACA subsidies, or any combination of the above could, in the future, wipe out any projected deficit reduction in the IRA and even increase deficits over the coming 10-year period.

The above deficit tally also leaves out numerous laws passed by Congress that increase deficits by a smaller amount – likely billions of dollars if not tens of billions of dollars in the aggregate. The above tally also leaves out the deficit impacts of executive actions taken by the Biden administration. CBO estimated this summer that just four of those executive actions would collectively raise deficits by between $370 billion and $420 billion over 10 years.

The above tally also excludes the use of budget gimmicks in several laws. For example, the rebate rule gimmick was also used in the Bipartisan Safer Communities Act to find $21 billion in “savings” to offset spending of nearly $21 billion. The IIJA also delayed implementation of this rule to yield $51 billion in savings.

The IIJA also included other budget gimmicks such as extending customs user fees nearly a decade from now to offset infrastructure spending in the bill, even though those user fees are already statutorily designated for customs enforcement. This budget trick was also used to find $5.7 billion in offsets in ARPA.

It should also be noted that, despite some opposition from members of both parties to deficit-busting legislation – from Republicans broadly concerned with increased spending to moderate Democrats like Sen. Joe Manchin (D-WV) advocating for a reconciliation bill that reduces deficits instead of adding to them – several of the bills outlined above received broad bipartisan support. Though ARPA and the IRA passed with only Democratic votes, IIJA, the PACT Act, and FY 2022 appropriations legislation were broadly bipartisan.

During the 2020 presidential campaign, NTUF's line-by-line analysis of then-candidate Biden's spending platform found that it would increase spending by at least $1.3 trillion each year. The growing deficits enacted since 2021 show that lawmakers are on track to achieve Biden's vision of a much larger federal budget.

Congress has a major spending problem. Both parties share in the blame, and both parties need to be aware of the bigger deficit picture rather than celebrating any small deficit reduction that may accrue from the IRA.