The disaster funding bill working its way through Congress is emblematic of much that is wrong with the budget process for this category of spending. Debate about the package has largely centered around getting the money out the door as soon as possible with little attention addressing the budgetary ramifications on future taxpayers from piling on more un-offset deficit spending. Worse, at each stage of the process of moving the bill, billions more were added to it, swelling the price tag from $14.2 billion when initially considered in January to $19.1 billion in May. The package is now in the Senate, along with a $4.5 billion add-on request by President Trump.

The Robert T. Stafford Disaster Relief and Emergency Assistance Act authorizes the President to declare a disaster upon request of a governor. This permits federal agencies to provide recovery assistance from the Federal Emergency Management Agency’s Disaster Relief Fund (DRF). For major disasters, the federal government covers at least 75 percent of the cost.

Funding is provided to the DRF through annual appropriations. The Budget Control Act of 2011 (BCA) set spending caps through FY 2021 and also allowed for adjustments to the caps to cover disaster relief. The limit on disaster funding adjustments are based on the average spending over the previous ten years, excluding the high and low years (prior to the BCA, the DRF level was based on a five-year rolling average). If Congress spends less than that amount in a given year, the unused portion can be used to further increase the cap the following year. This accommodated allocations to the Disaster Relief Fund each year without them counting against discretionary limits.

The Congressional Research Service (CRS) found that annual budget requests for the DRF by the Office of Management and Budget were lower than what was eventually required. From FY 2002 through 2011, annual requests averaged $1.9 billion, yet the average spend-out rate for those years was $4.2 billion. On occasion funds are transferred from one account to another to provide disaster assistance, but as CRS notes, “disaster relief funding has historically not been fully offset. In addition, assistance for large-scale disasters has usually been funded outside traditional budget restraints.”

When there is a shortfall, Congress provides the additional funding through supplemental appropriations and the outlays are typically designated as “emergency spending.” Under the BCA, this also adjusts discretionary spending limits upward. The BCA defines “emergency” as a situation that “requires new budget authority and outlays … for the prevention or mitigation of, or response to, loss of life or property, or a threat to national security.” The situation also must be “unanticipated,” which the law defines as “sudden … urgent … unforeseen … and temporary ….”

In essence, this process is used to fund immediate needs by adding to the deficit. This often raises questions about whether the funding that is provided is truly “emergency” or whether it should be made available through the normal appropriations. The Overseas Contingency Operations fund is a prime example of how the designation of “emergency spending” can be abused to avoid restraints. Ostensibly established to provide “emergency” funding for wars in the Middle East, it has been used as a “slush fund” to provide additional spending to the Pentagon above the base amount for general on-going programs not directly related to the active military operations overseas.

With the bill being considered in Congress, the amount of emergency funding for this year is set to far exceed the Congressional Budget Office’s (CBO) baseline. In January, the agency projected that $1.7 billion would be provided for nondefense emergency spending in FY 2019, much less than the amounts provided in the two previous years. 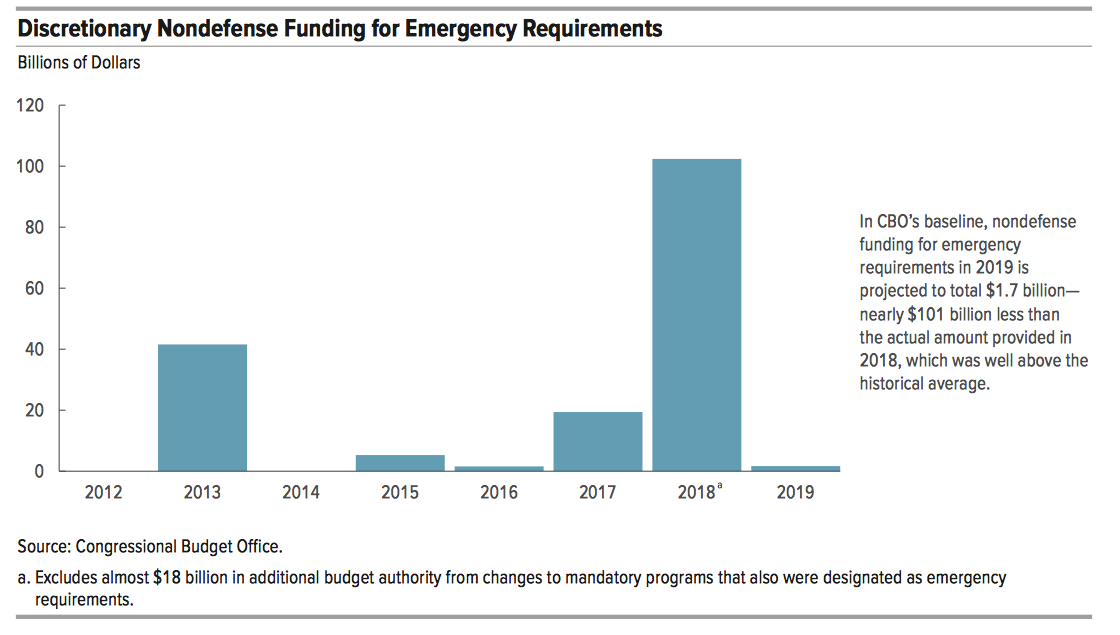 One problem that occurs with emergency spending packages is that they are often considered under an expedited process with rules that limit debate and the amendment process so as to usher the spending to passage as quickly as possible. Members did urge haste on passing the current package, but the process was slowed down. In January, The House originally passed supplemental appropriations in H.R. 268 to provide $14.2 billion. The package died in the Senate due to disagreements over the amount of aid provided to Puerto Rico in the bill.

Despite these initial concerns over the funding level, additional spending was subsequently thrown into the mix. As introduced, H.R. 2157, the current supplemental funding bill, provided $17.2 billion. The bill now includes $19.1 billion to provide funding “related to the consequences of recent wildfires, hurricanes, volcanos, earthquakes, typhoons, and other natural disasters.” The funding is designated as emergency spending and there are no offsets in the bill.

There has been at least one positive development for fiscal restraint. Senator Enzi raised a red flag about an additional “harbor maintenance” spending loophole that Senate appropriators had considered adding to the bill. When the provision was included in the earlier version of the disaster bill, Enzi warned that it “would essentially direct the appropriations from the Harbor Maintenance Trust Fund, up to a limit, to be scored as costing zero dollars. The effect of this change would allow Congress to spend an additional $2 billion above the statutory spending caps each year, while obscuring the real budgetary impacts from the American people.” It was reported on Monday that “Senate Appropriations Chairman Richard C. Shelby said he has pulled his divisive proposed change” from consideration in the disaster bill. To help prevent similar attempts to evade discretionary spending limits, the budget resolution passed by the Senate Budget Committee would provide a point-of-order objection against “directed scorekeeping.”

The rise in the cost of this year’s disaster funding far above and beyond what CBO projected in its baseline illustrates the shortcomings of the current process. In order to provide for better advanced budgeting for disasters, Congress should direct CBO to modify the calculation of the baseline. The high spending year is currently thrown out of the ten-year rolling average, but the likelihood of recurring large-scale emergency events needs to be included in budgetary considerations.

At the same time lawmakers should strengthen the determination of what constitutes an emergency event. The number of Stafford Act declarations has steadily increased since its passage. Justin Bogie of the Heritage Foundation notes that there were 16 declared disasters in 1988. During 2017, there were 137 declared disasters and 124 in 2018. With the federal government covering at least 75 percent of costs, states are incentivized to request disaster declarations. States should be required to pay for a higher share of the cost when disasters are declared, and the process for declaring these disasters needs to be more strictly defined.

There are major disasters that require immediate and swift response, but an effort must be made to account as much as possible for this spending in the base budget for FEMA. When a large-scale disaster does occur, the spending should be offset. For example, the rules could be reformed so that whenever Congress enacts un-offset emergency spending, it automatically triggers a reconciliation process to identify an equal amount of budgetary savings. If Congress fails to pass the reconciliation within a given amount of time, automatic rescissions would go into effect. This would allow for timely passage of aid when needed for real emergencies while also providing for budgetary discipline. Lawmakers must recognize that the government’s resources are finite and already overstretched.

If the supplemental appropriations package is enacted, $19.1 billion would be added to the deficit. This represents 1.4 percent of discretionary outlays for the year—a relatively small amount—but that makes it all the more troubling that it was thrown on the nation’s credit card without any offsets.