Myth: Your taxes are going up $2,500 to pay for student debt cancellation.

Fact: The student debt cancellation policy costs upwards of $400 billion; policymakers will need to pay for that spending eventually, and the representative burden per taxpayer is $2,500.

When we estimate that the average, per-taxpayer burden for President Biden’s student debt cancellation policy is $2,500, we are not claiming that anyone’s taxes will immediately increase $2,500 to cover the cost of this proposal.

This is a simple calculation of total cost divided by the number of taxpayers in the U.S. (158 million, as of the most recent IRS data), and is consistent with how the Department of Defense reports on the cost of the nation’s wars (as required by Congress) and how many organizations report on the average burden each person or taxpayer bears for the nation’s debt.

President Biden is canceling student debt through executive action – a troubling exercise of emergency presidential powers, but debt cancellation is not occurring through an act of Congress. Had Congress canceled student debt through legislation, they may have chosen to offset or ‘pay for’ the cost of debt cancellation with tax hikes or spending decreases elsewhere in the federal government’s budget.

President Biden cannot raise taxes unilaterally, and cannot (typically) spend money unauthorized by Congress. The practical impact of Biden’s student debt executive action is that, in the immediate term, the $400 billion-plus cost of the policy will be paid for with more debt. Higher debt presents a number of risks to taxpayers, including:

Our analysis is meant to be representative of all taxpayers, even though the U.S. has a progressive tax code – meaning that high-income taxpayers pay a larger portion of their income in taxes than low-income taxpayers.

NTUF noted that, if the cost of student debt cancellation were distributed across 158 million taxpayers according to their relative tax burden in the current system, cost per taxpayer would be lower for low-income taxpayers and higher for high-income taxpayers. 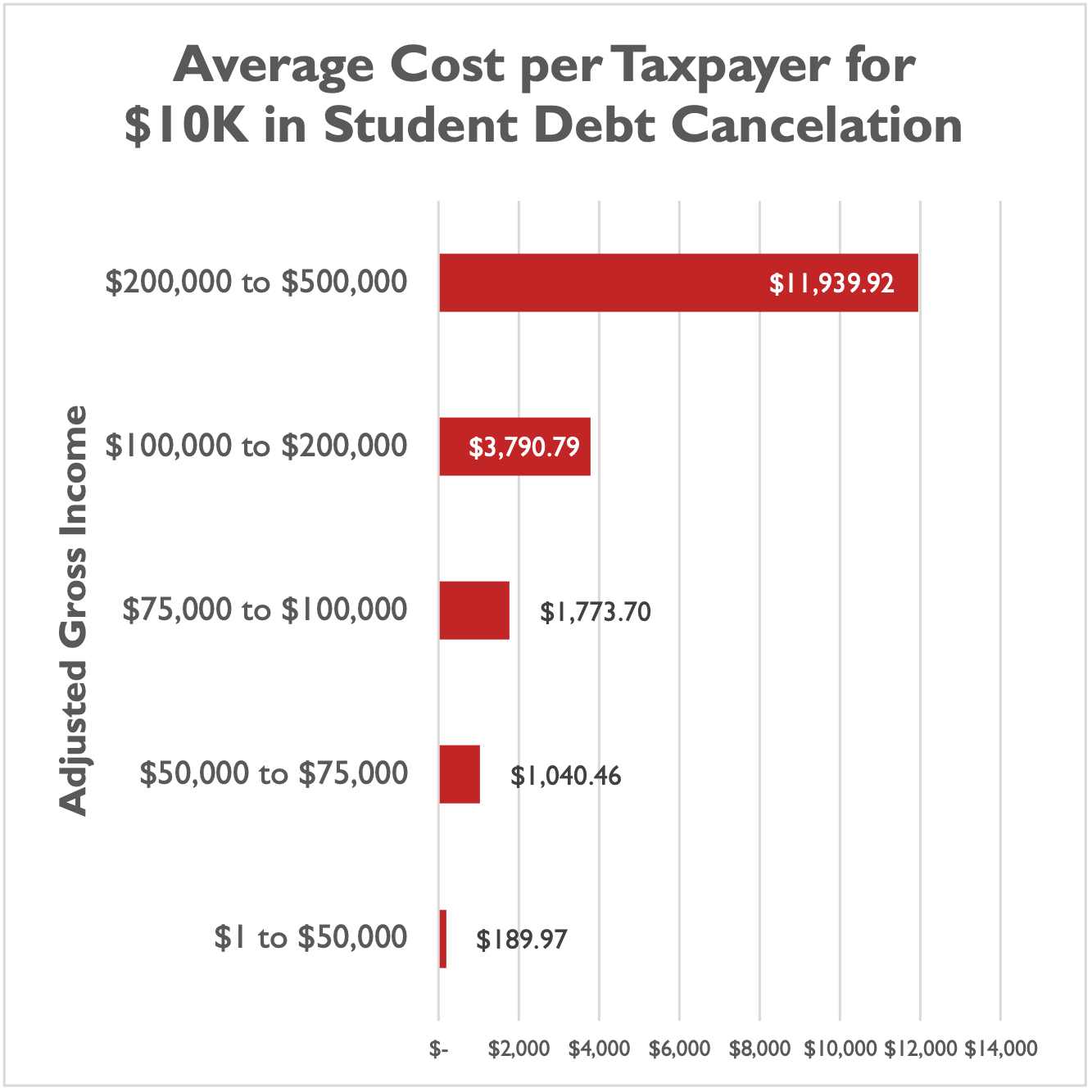 This nuance was lost on some respondents who focused on NTU Foundation’s headline figure rather than the distributional analysis provided in our full piece.

In a theoretical future where Congress decides to cover the cost of student debt cancellation – and we’re not holding our breath – they could decide to increase taxes broadly, or narrowly (attempting to target certain businesses or high-income taxpayers, for example), or they could decide to decrease spending for certain government programs but not others.

In short, no one’s taxes are immediately going up to pay for student debt cancellation now. This policy does significantly increase the national debt though, and NTU Foundation strongly believes taxpayers will ultimately be responsible for reducing the national debt, whether through decreases in other government spending, increases in taxes, or some combination thereof.

Myth: “...1.7 trillion more dollars are coming into the Treasury than are going out.  And we’re using a portion of that — a very small portion of it — to provide relief to middle-class families, consistent with the President’s plan.” - White House National Economic Council Director Bharat Ramamurti

Fact: Deficits are falling from historically high levels due to COVID-19, but are still projected to run around $1 trillion in each of the next several years. There are no new funds to pay for student debt cancellation, since the government is still spending $1 trillion more than it brings in.

“What I would say is that, yes, this is paid for; it is paid for and far more by the amount of deficit reduction that we’re already on track for this year.

Like I said, we’re on track for $1.7 trillion in deficit reduction this year.  That means, practically speaking, compared to the previous year, 1.7 trillion more dollars are coming into the Treasury than are going out.  And we’re using a portion of that — a very small portion of it — to provide relief to middle-class families, consistent with the President’s plan.

So, yes, we consider it fully paid for.”

This is a considerably misleading claim.

While Ramamurti is correct that deficits are plunging in the current fiscal year, FY 2022, relative to FY 2021, this is because the U.S. government is no longer spending historic amounts on COVID-19.

President Biden, former President Trump, and both parties in Congress approved various legislation in 2020 and 2021 that increased deficits to historic levels.

However, the Congressional Budget Office (CBO) still projects significant deficits in each of the next 10 years, averaging – wait for it – 4.8 percent of GDP, same as the ten years prior to the COVID-19 pandemic. 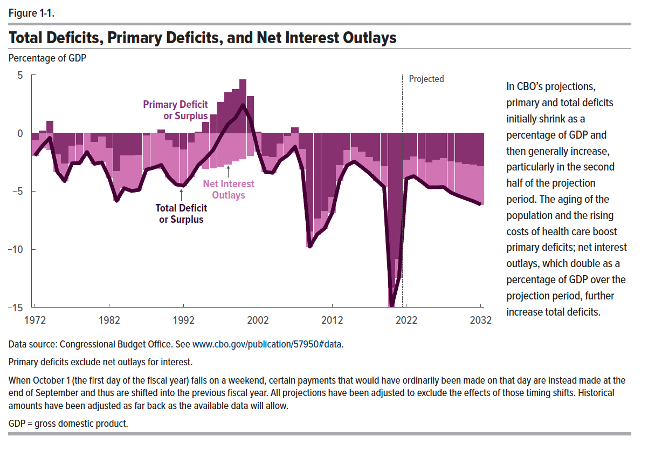 In fact, CBO projects deficits will exceed $1 trillion in nine of the next 10 fiscal years. The exception is FY 2023, when deficits are almost $1 trillion ($984 billion).

The Biden administration appears to be trying to take credit for simply adding less debt to the nation’s credit card than it did in FY 2021, even though the nation will still add around $1 trillion in debt to its credit card in each of the next two fiscal years (2022 and 2023).

Fact: PPP was passed by Congress with the clear, bipartisan intent for loan amounts spent on payroll to be forgiven.

While the efficacy of PPP is certainly up for debate, Americans should know that Congress (and the Trump and Biden administrations, which both implemented laws funding PPP) fully intended for significant portions of PPP loans to be forgiven. PPP was, in practice, more of a grant program than a loan program.

As the Congressional Research Service noted at the time, “PPP loans used for payroll expenses and for specified nonpayroll operating costs paid or incurred during an eight-week ‘covered period’ can be forgiven if the borrower meets certain payroll and employment retention criteria.” Successive laws extended that “covered period” and relaxed the rules around how much of a PPP loan needed to be explicitly used on payroll.

Myth: You wouldn’t scrutinize the military budget like this.

NTU and NTU Foundation have long been concerned with runaway spending in the Defense Department, and we have released detailed proposals asking Congress to cut military spending: