On Tuesday, over 100 economists signed a letter to Congressional leaders urging them to pass the Inflation Reduction Act (IRA), claiming that because the legislation “is deficit-reducing,” it will put “downward pressure on inflation.” However, this claim was undermined the very next day by a new Congressional Budget Office (CBO) estimate that found that only seven percent of the IRA’s deficit reduction, or $21.4 billion out of $305.2 billion, occurs in the next four years. This makes it extremely unlikely that the IRA will fight inflation in the next few years, when it is expected to be highest – a finding confirmed by CBO in an analysis that found the IRA will have negligible effects on inflation in calendar years 2022 and 2023. 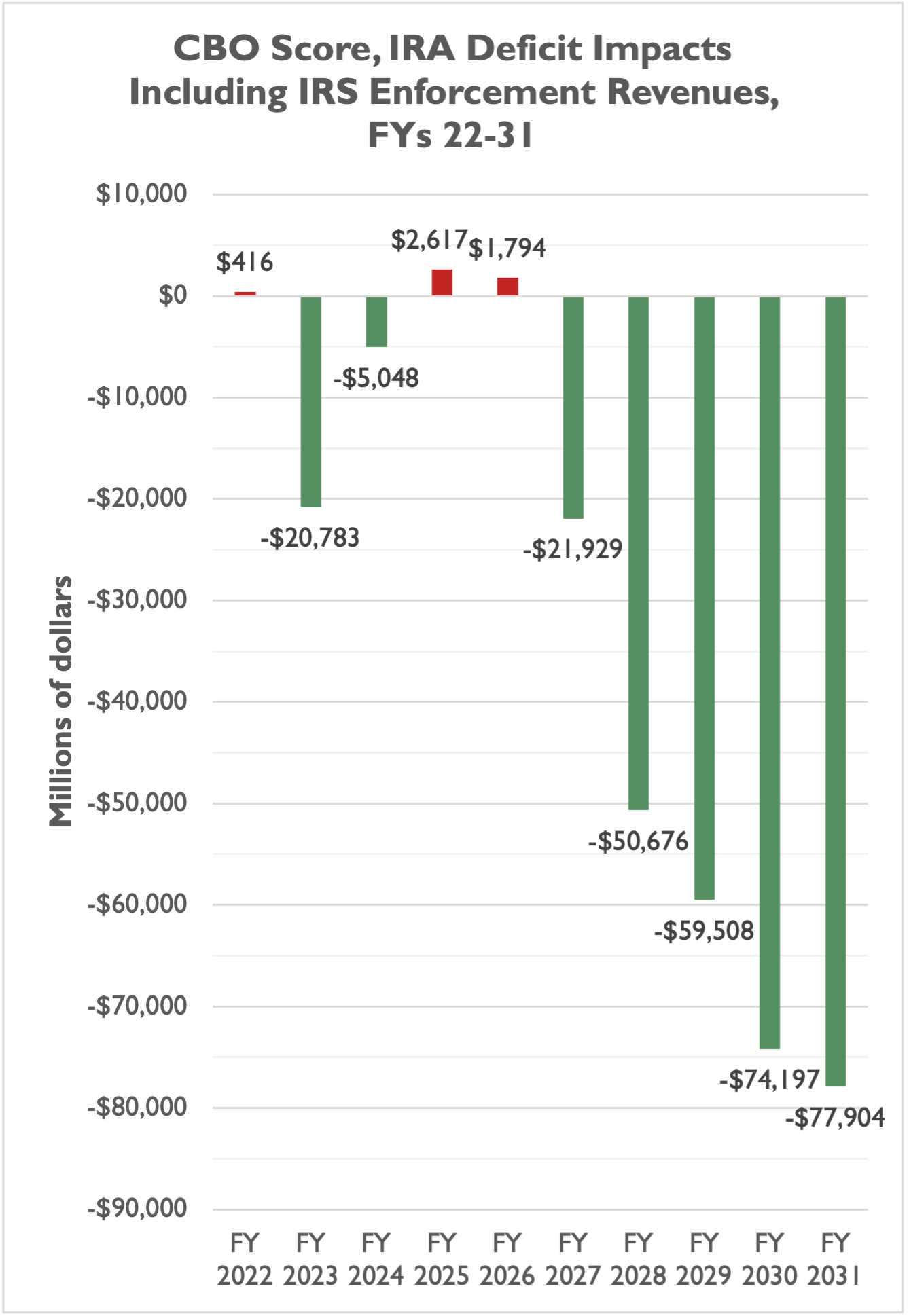 Importantly, though, CBO’s cost estimate confirms that the legislation does not significantly reduce deficits in the next few years. The combined net deficit reduction from FYs 2023 through 2026 of the legislation ($21.0 billion) is less than the deficit reduction in FY 2027 alone ($21.9 billion). This is similar to NTUF’s analysis of the legislation and analysis from the Penn-Wharton Budget Model, which both found deficit impacts to be insignificant at best. (The exact CBO estimate differs slightly from previous NTUF estimates, primarily because we did not have information on how fast federal agencies would spend the tens of billions of dollars in energy and climate appropriations they are due to receive under the IRA. NTUF projected that agencies would spend that money faster than CBO projects, which means the CBO estimate projects more deficit reduction than NTUF does in the early years of the 10-year window and less deficit reduction in the later years.)

Given the expected size of the economy over the next four fiscal years ($111.1 trillion in CBO’s May 2022 baseline), it is unlikely that net deficit reduction representing less than two-hundredths of one percent (<0.02 percent) of size of the economy in that time will have an impact on inflation in the near run – especially considering that revenue increases in the early years of the legislation (from the corporate book minimum tax and increased IRS enforcement) will be nearly completely offset by increased spending on Affordable Care Act subsidies and energy programs. Even the deficit reduction in FY 2023 ($20.8 billion), when inflation is expected to be highest in the next three years, is less than one tenth of one percent (<0.1 percent) of the size of the economy. Simply put, spending and revenue changes that net out to such small deficit reduction are unlikely, on their own, to meaningfully impact inflation.

CBO confirmed as much in their Thursday analysis of the inflationary impacts of the legislation, writing:

“In calendar year 2022, enacting the bill would have a negligible effect on inflation, in CBO’s assessment. In calendar year 2023, inflation would probably be between 0.1 percentage point lower and 0.1 percentage point higher under the bill than it would be under current law, CBO estimates. That range of likely outcomes reflects uncertainty about how various provisions of the bill would affect overall demand and output, the supply of labor, the persistence of disruptions in the supply of goods and services, and how the Federal Reserve would respond to offset any increase in inflationary pressure. Responsiveness to the enhancement of health insurance subsidies established by the Affordable Care Act is the most important factor boosting inflationary pressure, and responsiveness to the new alternative minimum tax on corporations is the most important factor reducing inflationary pressure. The range applies to multiple measures of inflation: the GDP price index, the personal consumption expenditures price index, and the consumer price index for all urban consumers.”

It is also debatable over whether the bill’s future deficit reduction will materialize. The bill cuts off expanded ACA subsidies after 2025, and it is highly plausible that these subsidies will be extended or made permanent. This would increase spending, reduce revenues, and increase deficits relative to the current CBO score.

The IRA also relies on a budget gimmick – repealing a Trump-era prescription drug rebate regulation that was never implemented and never likely to go into effect – that does not affect the deficit reduction in the early years of the 10-year budget window, but does contribute $122 billion to deficit reduction from FYs 2027 through 2031 (40 percent of the total deficit reduction for the IRA in the 10-year window). Lawmakers should not be relying on this gimmick as an offset to legislation that increases spending and/or reduces revenues.

This legislation puts “inflation reduction” at its rhetorical core, but is unlikely to have a meaningful effect on inflation when it matters most in the next few years.