August 3 Update: CBO has released its official score for the Inflation Reduction Act, which can be found here. CBO's projections of the year-by-year impact of spending and revenues in the IRA differ from NTUF's projections below.

Update, August 2: We have updated our estimates of the year-by-year impacts of the IRA based on data from the nonpartisan Joint Committee on Taxation (JCT) regarding the energy and climate tax breaks in the legislation. Read more here.

Inflation is at the rhetorical center of the new agreement announced between Sen. Joe Manchin (D-WV) and Majority Leader Chuck Schumer (D-NY). Their reconciliation legislation would spend hundreds of billions of dollars while claiming to offset those expenditures with higher taxes and reduced spending elsewhere, to reduce the deficit on net. Unfortunately, the agreement – the Inflation Reduction Act, or IRA – postpones major savings for future years while frontloading spending to the next few years, precisely when high inflation is most challenging for the U.S. economy and consumers.

The word “inflation” or variations show up no fewer than 11 times in Sen. Manchin’s statement announcing the outline of his agreement with Leader Schumer. The Senator from West Virginia pledges his legislation will “cut the inflation taxes Americans are paying,” “[fight] inflation,” and generally “address record inflation by paying down our national debt, lowering energy costs and lowering healthcare costs.”

Based on a summary released by Leader Schumer, the bill is projected to:

Policymakers like Sen. Manchin and some non-government stakeholders have praised the deficit reduction in the bill, arguing that this will reduce the record levels of inflation the U.S. economy has been experiencing for the better part of a year.

A closer look at the timing of the new spending and tax cuts in the bill (versus the timing of reduced spending and revenue increases) suggests that the bill won’t reduce inflation in the next few years because, on net, the Inflation Reduction Act may spend more than it saves in some of the early years. Any front-loaded deficits will increase interest payments on the national debt. As a rule of thumb based on CBO data, each $100 million increase in spending in 2023 will add $27 million to debt interest costs over the decade.

Only in FY 2027 do deficits start to decrease substantially, likely well beyond the immediate period of elevated inflation based on CBO estimates and consumer expectations. (FY 2022 is almost over, so it is likely that the IRA has no practical effects on government spending or revenues in FY 2022.) 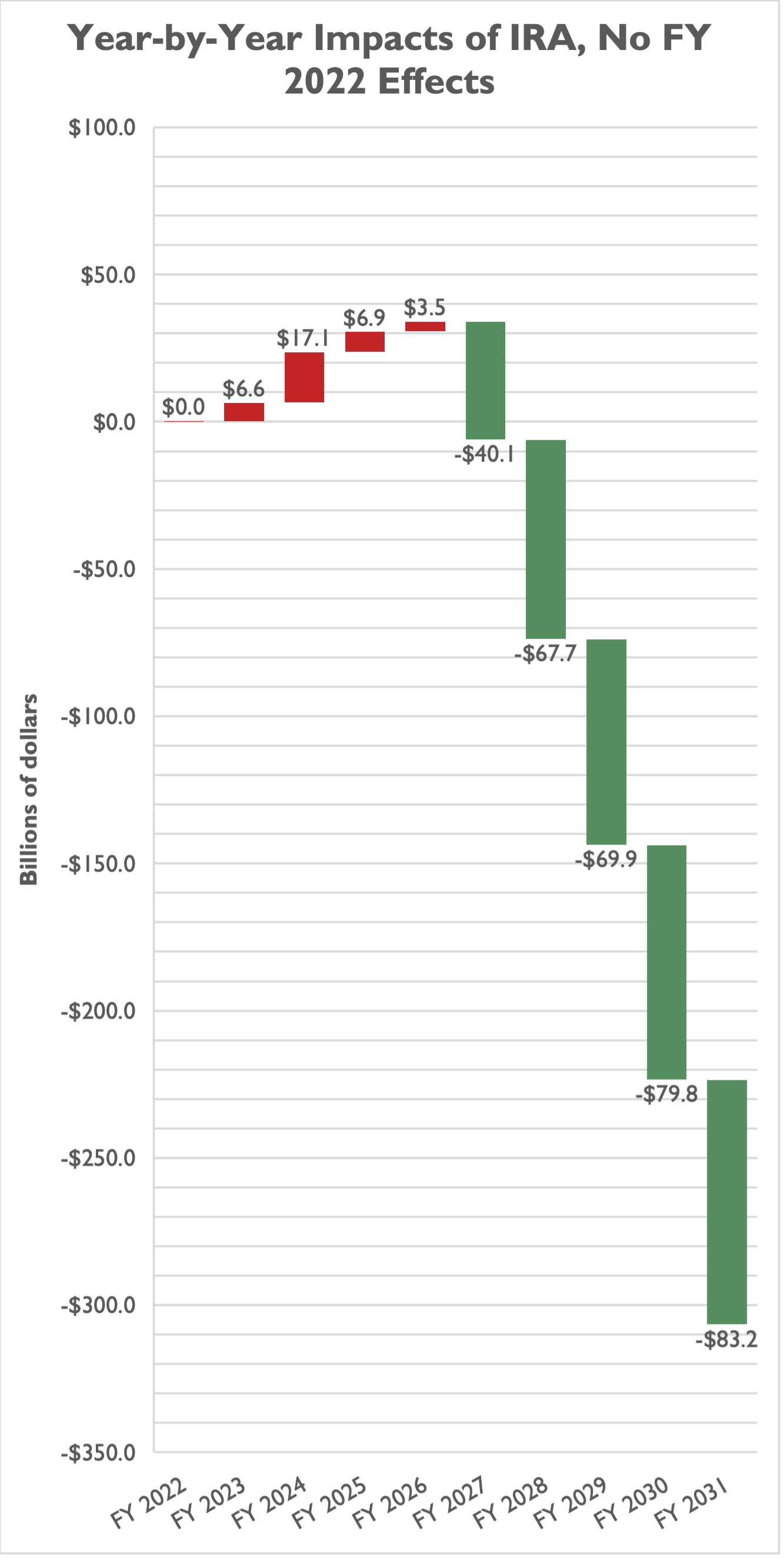 Our estimate for the energy and climate provisions assumed that tax credits are spread out in a similar manner to how similar provisions were spread out in the House-passed Build Back Better Act (BBB). The IRA’s energy tax breaks are only three-quarters the size of BBB, which we adjust for in our estimate. We spread out climate and energy spending evenly over the specified periods authorized for various programs (for example, the IRA signals some appropriations must be spent over five years while others may be spent over eight, nine, or ten years).

We therefore find that net deficits may actually increase by billions of dollars from fiscal years 2023 through 2026 under the bill.

An alternative assumption, that spending on various programs starts low in FY 2023 before growing over time, leads to slightly different estimates for the IRA’s year-by-year effects – minor deficit reduction in FY 2023, and slight deficit increases from FYs 2024 through 2026, before more significant deficit reduction from FY 2027 onwards: 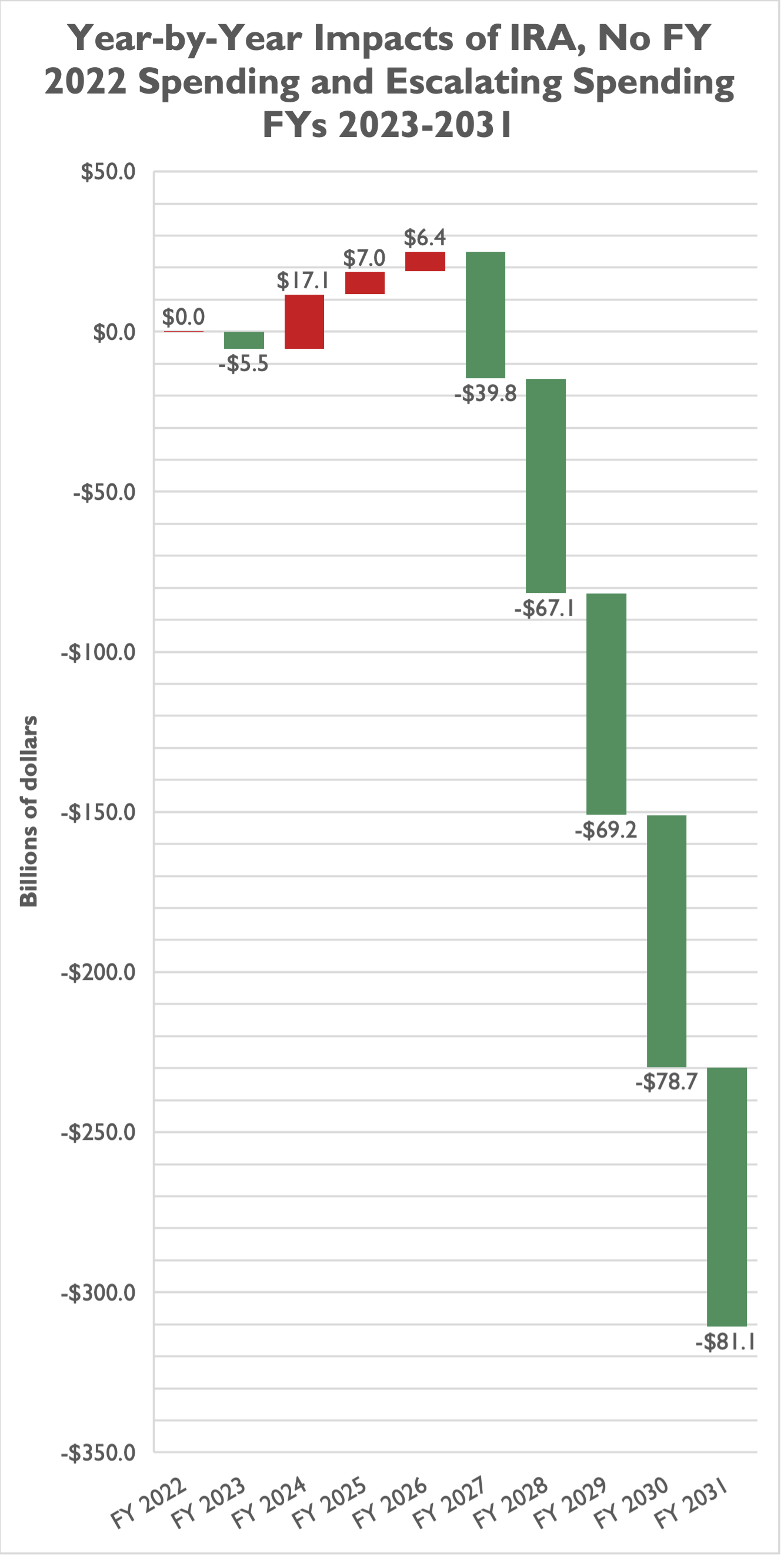 These assumptions are simplified, and future CBO and JCT estimates will offer more clarity as to how energy and climate spending and tax breaks are spread out over a 10-year window.

Expected deficit reduction would be even lower if the bill’s gimmicky “savings” from repealing the Trump-era prescription rebate rule – a regulation that was never likely to go in place and won’t actually reduce spending relative to current law/regulations – were removed. 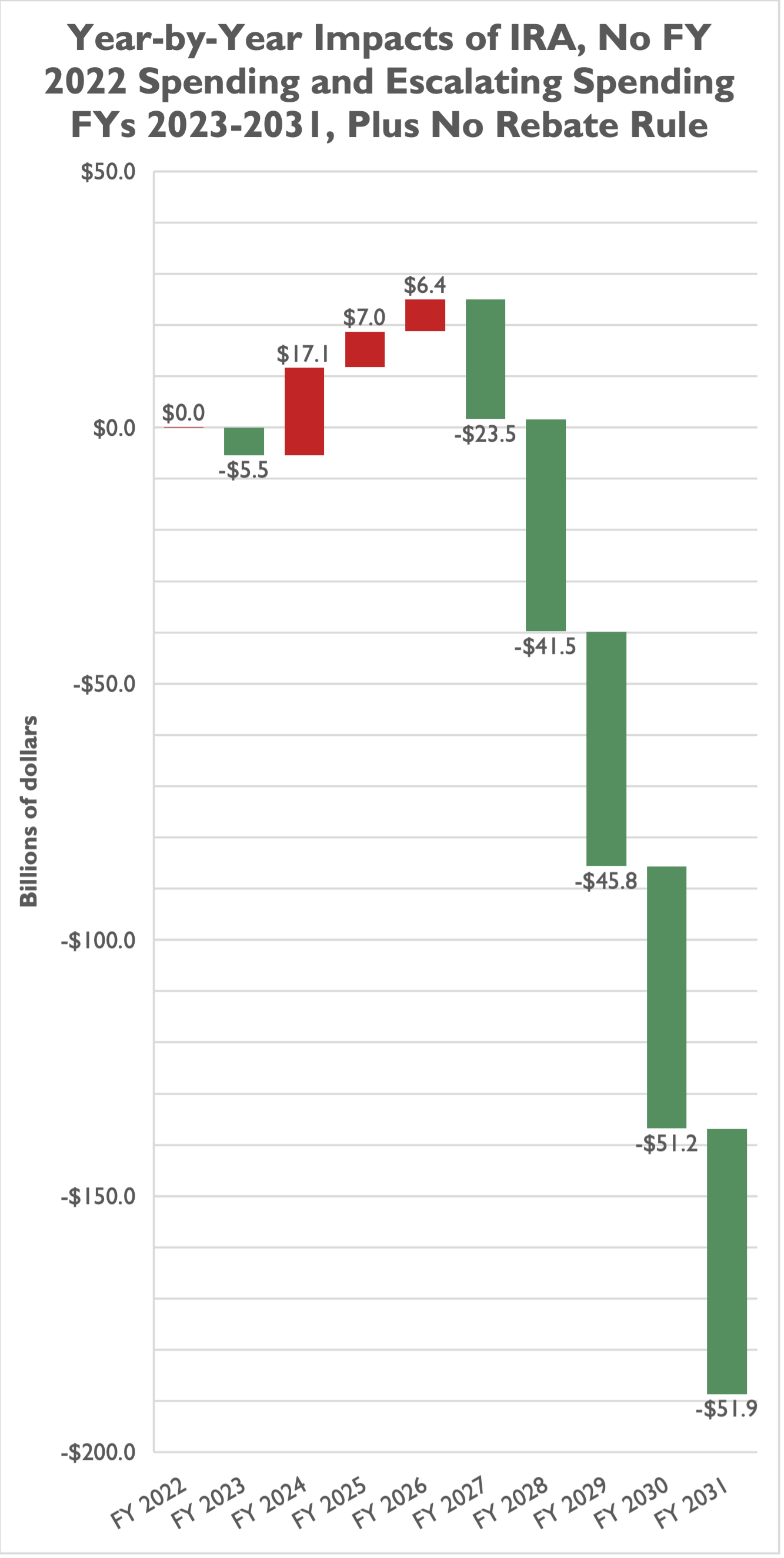 The IRA may not pour fuel on the inflation fire like the American Rescue Plan Act did, but it is unlikely to reduce near-term inflationary pressures as proponents claim. The “paying down our national debt” that Sen. Manchin refers to won’t start occurring for five years. The “lowering [of] energy costs” involves investments in future technology that will require years to develop and take effect. And the “lowering [of] healthcare costs” doesn’t take effect for years (as with the prescription drug price controls) or merely masks high health care costs rather than meaningfully addressing them (as with the ACA subsidies).

Marc Goldwein of the Committee for a Responsible Federal Budget (CRFB) notes in his new memo that 10 years of ACA subsidy extension – instead of the three years in the bill and something Congressional Democrats will certainly push for in the years ahead before they expire in 2025 – would further reduce the claimed deficit reduction from $300 billion to $150 billion. Taking out the rebate rule – which accounts for $120 billion, or nearly 40 percent, of the on-paper deficit reduction in IRA – and pairing it with a likely permanent ACA subsidy extension means the IRA reduces deficits by $30 billion – a rounding error in the scope of the federal budget.