The newly proposed corporate AMT, often referred to as a ‘book tax’ or ‘book minimum tax,’ is an old idea by Washington standards, and has been bandied about in various forms several times during the Biden administration, by the president and lawmakers alike.

Here’s a review of the top ten reasons why the new book minimum tax in the IRA makes for bad tax policy.

1. It raises taxes $313 billion at a time of great uncertainty in the economy

This book minimum tax proposal came literally one day before the U.S. Bureau of Economic Analysis reported that the U.S. economy, measured by gross domestic product (GDP), shrunk at an annual rate of 0.9 percent in the second quarter of 2022. This GDP decline follows a 1.6-percent (annualized rate) decline in the first quarter of 2022. Policymakers should rethink a tax hike that involves taking $313 billion out of the economy over the next 10 years, including almost $100 billion in the next two years alone according to JCT: 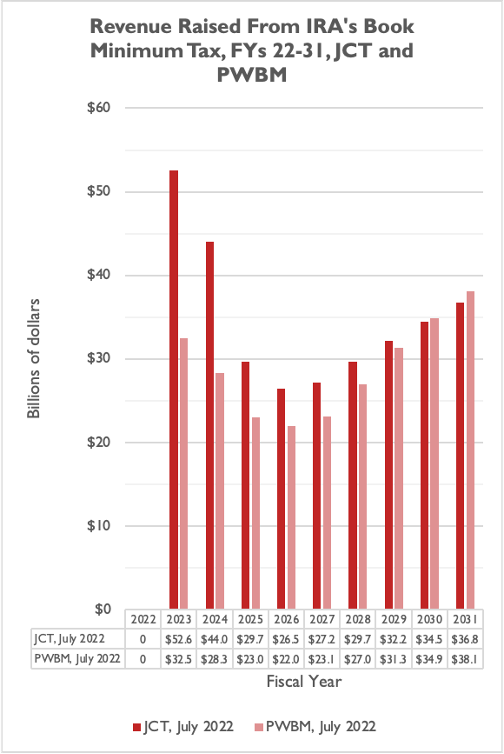 An alternative estimate from the Penn Wharton Budget Model (PWBM) found the book minimum tax would bring in $260 billion over 10 years instead of $313 billion – and $61 billion over the next two years instead of nearly $100 billion. Whether by the JCT estimate or the PWBM estimate, though, the book minimum tax will take tens of billions of dollars from U.S. businesses in the next few years, at a time when the economy may already be in a recession or soon tipping into one.

2. The tax base is extremely narrow

The U.S. tax code should feature low rates and broad bases; unfortunately, the book minimum tax has an extremely narrow base. Even though there are more than 1.5 million active corporations in the U.S., JCT estimates that “only approximately 150 taxpayers annually will be subject to the proposed book minimum tax.”

In other words, roughly 150 companies will be responsible for all $313 billion JCT projects the tax will raise over 10 years – an average of over $2 billion per company per year.

3. The tax could undermine popular parts of the tax code that help grow the economy

The book minimum tax proposal picks winners and losers in the tax code, favoring certain credits and deductions that have broad bipartisan support and denying companies others. As we wrote in October of last year, the book minimum tax could undermine investment in the U.S. by denying companies the ability “to fully expense the costs of capital investment (such as full and immediate expensing for machinery and equipment under the 2017 Tax Cuts and Jobs Act).”

4. The last effort at this, in the 1990s, hurt specific industries of the economy

Last November, Tax Foundation’s Alex Muresianu and Erica York had a thorough historical review of the corporate AMT that was in effect from 1986 through 2017 (and was repealed by the TCJA).

Muresianu and York find that the tax “created economic inefficiencies, increased tax burdens and complexity, and saw declining tax revenues over time.” They note that the manufacturing industry was disproportionately affected by the AMT (as with the IRA’s new book minimum tax, see more below).

The authors also illustrate that revenues from the tax were low and that the system actually “lost revenue” in the late 1990s, when AMT credits exceeded AMT collections (chart via Tax Foundation): 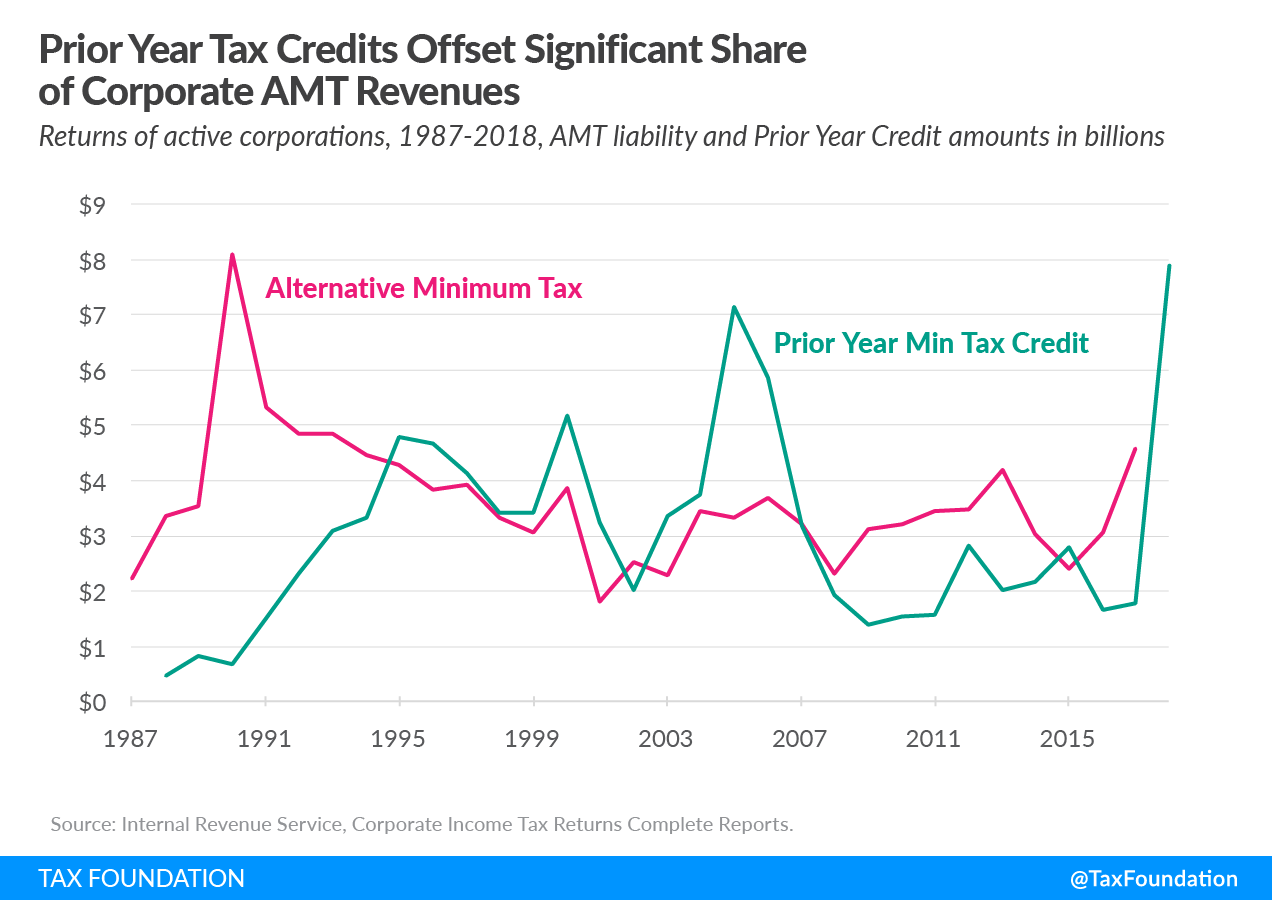 Overall, the last corporate AMT was a clear economic and tax policy failure.

5. There are plenty of legitimate reason book income and tax income differ

As NTU has noted before, measures of book income and taxable income serve different purposes; book income is a form of financial reporting that publicly-traded companies are responsible for reporting to their investors and shareholders, whereas taxable income is determined by lawmakers and regulators through the Internal Revenue Code.

There are temporary differences between book and tax income, which smooth out over time, and permanent differences due to the intentional effects of various provisions in the tax code. This NTU chart offers a sampling of book and tax differences: 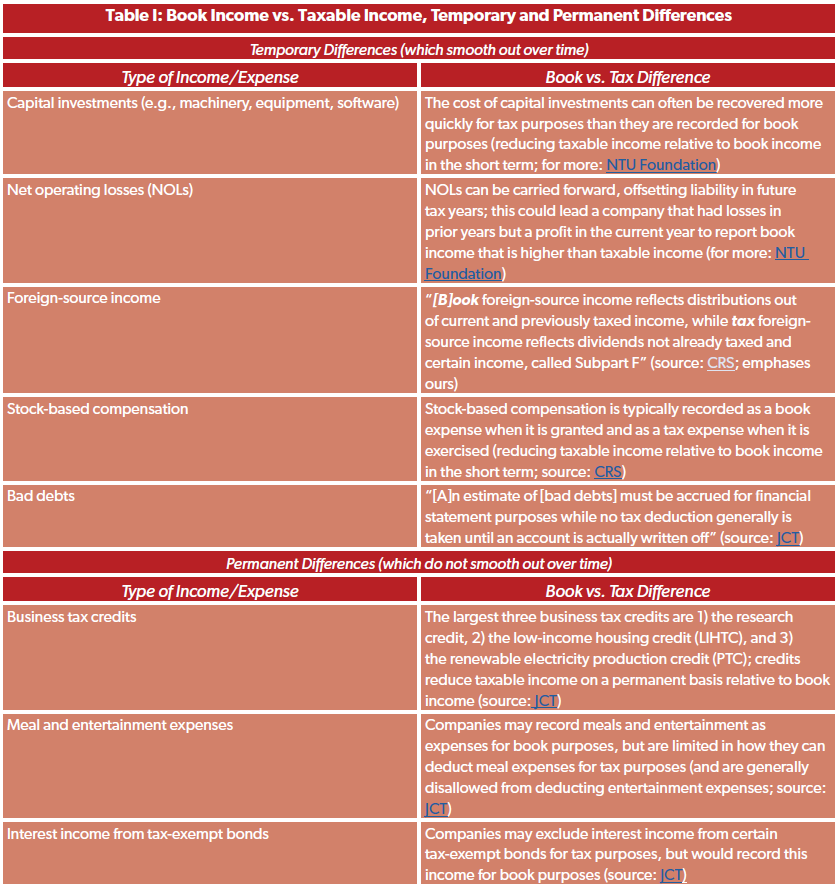 Lawmakers just spent months debating and eventually passing a massive spending bill that delivers tens of billions of dollars in taxpayer subsidies to semiconductor companies, in an apparent effort to revitalize American manufacturing of goods that will help make the U.S. economy more productive and innovative in the years ahead.

The wholesale trade, information, and management industries are also hit hard by the tax. Each of those industries will pay tens of billions of dollars in additional taxes over 10 years, according to JCT: 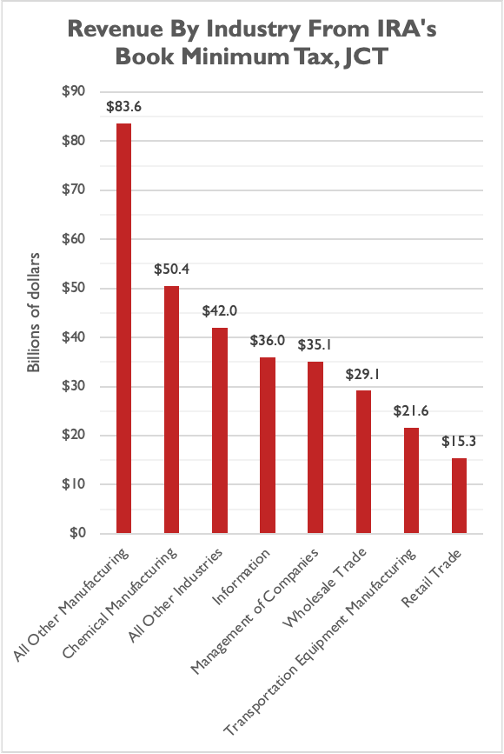 Again, this tax does not broadly apply to all U.S. corporations. It hits only 150 companies per year and it disproportionately affects certain industries relative to others.

7. 87% of the tax will be paid by companies in industries employing 1 in every 4 Americans

Of additional concern is that the five industries hit hardest by the book minimum tax – manufacturing, wholesale trade, retail trade, information, and management – collectively employ around 40 million Americans, or one in four of the 158 million civilians employed in the U.S. in June 2022 according to the Bureau of Labor Statistics. The breakdown is as follows:

8. 60% of the tax will be paid by companies in industries comprising 80% of all R&D spending

According to National Science Foundation data, manufacturing and information – two of the industries most impacted by the book minimum tax – were responsible for 80 percent of all research and development (R&D) spending in 2019, a total of $396 billion in R&D (out of an estimated $493 billion total).

The book minimum tax would siphon revenues away from these companies, a significant portion of which they are currently putting into R&D, and into government coffers.

9. The tax outsources tax policy from Congress, where it belongs, to a non-profit body

Book income reporting standards are currently set by a non-profit, private-sector organization called the Financial Accounting Standards Board (FASB). The FASB is “recognized by the U.S. Securities and Exchange Commission as the designated accounting standard setter for public companies.”

And, as JCT has written: “proposals which rely on the Congress to set out new accounting standards to be used for both financial accounting and tax purposes would contradict decades of practice in the accounting and auditing fields”

Proponents of the IRA have made the case that raising taxes on companies will reduce inflationary pressures. Or, as The New York Times put it in a story about the IRA:

“Reducing the federal budget deficit should reduce consumer spending power in the economy, at least somewhat. In particular, it could take money from high earners, via increased tax enforcement, and large corporations.”

The book minimum tax in the IRA likely won’t reduce inflation in the short term though, since the legislation also spends tens of billions of dollars per year and, on net, does not reduce deficits significantly until 2027: 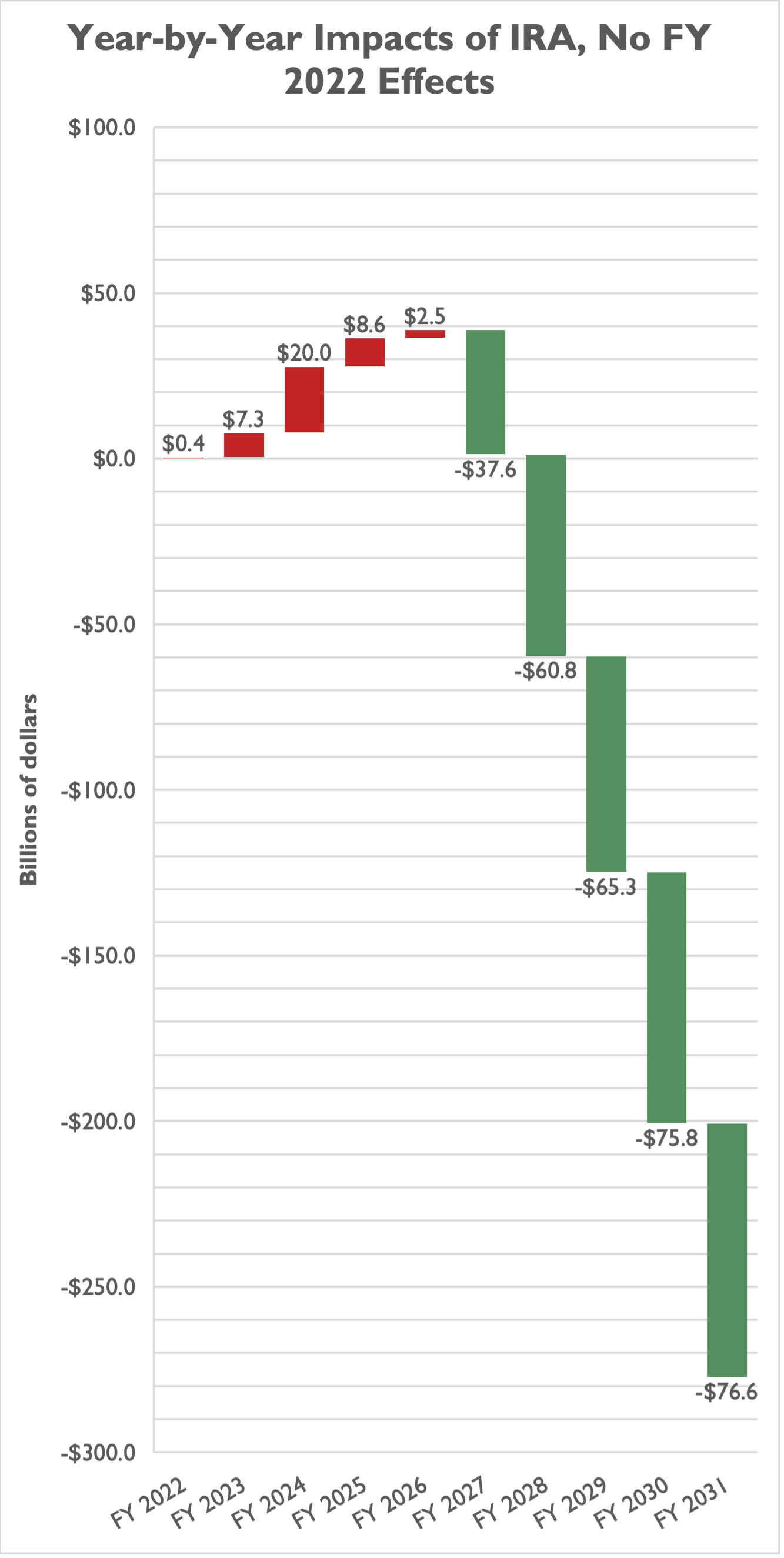 PWBM confirmed as much on Friday, writing in a policy brief that the Inflation Reduction Act’s “impact on inflation is statistically indistinguishable from zero,” and will actually “slightly increase inflation” (emphasis added) until 2024 before decreasing inflation thereafter. (PWBM adds, “These point estimates are statistically indistinguishable from zero, thereby indicating low confidence that the legislation will have any impact on inflation.”)

The book minimum tax won’t fight inflation in the near term (when combined with the IRA’s spending), will hurt the U.S. economy as it may be tipping towards recession, and makes for bad tax policy.