Not only is Congress still funding so-called “zombie” programs that feast on taxpayer dollars, but the problem is worsening. The Congressional Budget Office (CBO) produced an overview and analysis of funding that persists for programs even though their authorizations have expired. CBO found $432 billion in spending is going to more programs that haven’t been properly assessed by Congress. This is higher than a year ago.  Lawmakers should implement reforms to routinely review these programs to make sure they are functioning properly before automatically providing scarce taxpayer resources.

Background on the Report

The Congressional Budget Act of 1974, which established the modern budget process and CBO, requires the agency to produce an annual report of programs whose authorizations have expired as well as those programs whose authorizations are set to expire during the current fiscal year. On paper, this should help keep Congress and the committees of jurisdiction conduct oversight as necessary to evaluate the performance of programs through hearings before re-authorizing programs.

The budget is a two-step process. The congressional authorizing committees in each chamber write laws defining programs and they either set specific budget authority or authorize “such sums as may be necessary” to carry out the objectives they’ve established. Authorizations can be set over a finite number of years or be open ended. The appropriations committees then provide the funding for departments and agencies to carry out the programs pursuant to their authorization.

But appropriators can continue to provide funding to programs whose authorization have run out. In general, House and Senate rules provide for points of order against the consideration of appropriations without an authorization. However, a Congressional Research Service specialist on the legislative process testified that the House “almost always waives” these points of order. The point of order rule is narrower in the Senate: Because appropriation measures generally originate from the House, the point of order can only be made against amendments to appropriations bills.

CBO normally produces its report on expired authorizations in mid-January, but it can sometimes be delayed because the appropriations bills are often not enacted in a timely manner. Pushing back the release date of the report allows the agency time to provide the most up-to-date and accurate information. This year, it produced a list of the expired and soon-to-be expiring authorizations on January 15, and on May 5, it released a summary analysis that included comparisons to last year and more technical information regarding the data. This latest supplementary report marks the first time CBO has provided such in-depth analysis of the process used to produce the findings.

A lot of work goes into identifying expired authorizations and unauthorized spending throughout the massive federal budget. CBO expanded its report this year with an appendix detailing the elaborate processes and methodology used to review authorizations, update its database of authorizations, double check information with staff members within each committee of jurisdiction over the spending areas, and to avoid double-counting. 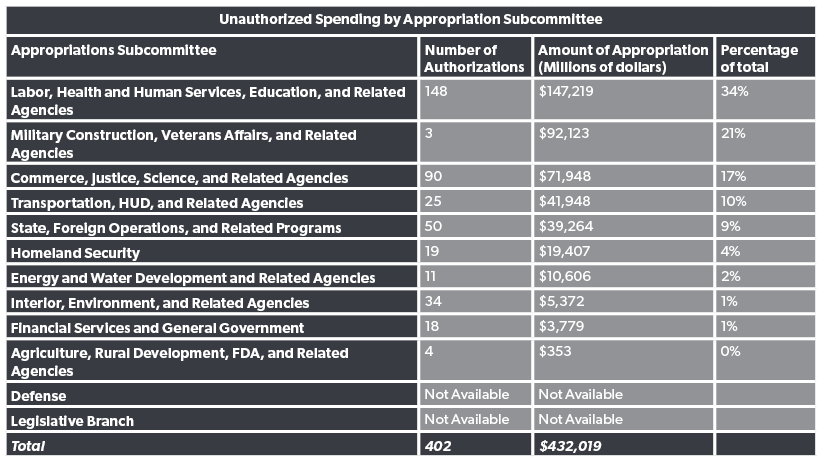 CBO also breaks out the data by the appropriations subcommittee. That data is included above along with a column showing the percentage break out of expired authorizations per subcommittee.

These zombie programs raise concerns about whether congressional committees and appropriators are properly fulfilling their oversight responsibilities when spending scarce taxpayer dollars. Taxpayers deserve a Congress that carefully evaluates programs to ensure that they are meeting performance expectations and that funding is being spent as wisely and efficiently as possible.

Fixing this issue would also help CBO produce better budget projections. The agency produces regular ten-year baseline projections of spending and revenues which provide the benchmark against which all legislative proposals are scored. Because Congress requires CBO to produce its baseline based on a strict reading of spending authorized by current law, dollars appropriated to unauthorized programs are unaccounted for in the baseline and subsequent legislative scores.

Adding further confusion to the issue, when authorizing committees perform due diligence to review and reauthorize expired programs, CBO’s cost estimates may look more expensive relative to current law when compared to current policy (which takes into account Congress’s actual spending habits, not its on-paper planned spending habits). Because an expired authorization technically projects as zero future spending, even reauthorizing a program at a reduced funding level looks like a significant spending increase. This ultimately misleads legislators and taxpayers as a result of the archaic scoring rules used by CBO at Congress’s behest.

Congress should enact reforms to compel authorizing committees to address expired authorizations in their “views and estimates” reports. As NTU’s Director of Federal Policy Andrew Lautz noted in a recent comprehensive report on budget reform ideas, under the Congressional Budget Act, authorizing committees are required to report in their views and estimates reports to the budget committees if they plan to reauthorize any federal program. Congress could strengthen this requirement and compel resolution of hundreds of expired programs by requiring committees to submit a plan for reauthorizing expired programs within a certain timeframe.

A similar reform was introduced in the Senate in 2019. The comprehensive, bipartisan budget reform proposal introduced in the previous Congress by Senators Mike Enzi (R-WY), now retired, and Sheldon Whitehouse (D-RI) would have required congressional committees to report their plans for considering the unauthorized programs under their jurisdiction. It also required the committees to detail “their plans for improved government performance based on their review of relevant Inspector General and Government Accountability Office reports and recommendations.”

As NTUF wrote previously, there is no shortage of official information regarding the performance of federal programs, and while continuing to bolster transparency is important (especially to improve the accuracy and consisting of the data reported by agencies), eliminating wasteful programs from the budget will require concrete action from lawmakers.

A related proposal would provide for a fallback mechanism in case the committees fail to follow up on zombie programs. The Unauthorized Spending Accountability Act of 2019, introduced by Representative Cathy McMorris Rogers, would require that any spending provided to unauthorized accounts be reduced by 10 percent in the first year, and 15 percent in each of the following two years, after which they would be completely sunset.

The long overdue completion of a comprehensive inventory of federal programs would also assist CBO in identifying funding for programs with expired authorizations. CBO noted the challenges in finding this funding and that there could be gaps in what it reported.

Congress should also work to review dormant authorizations to help prevent re-animation of phony offsets. Appropriations bills will often include rescissions of previous budget authority as offsets to paper over higher spending also include in the packages. While this has superficial appeal, in many cases these authorizations were for programs that no longer receive any actual outlays. It is just a gross budgetary gimmick to pretend to save money without doing the hard work of actually reforming or restraining spending.

There has been an effort to have Congress reclaim its power of the purse, which has entailed both positive steps to regain tax authority ceded to the executive branch via tariff power, or more dubious efforts to bring back earmarks, which have had a corruptive influence on lawmakers. One area where Congress can take steps to improve its existing use of the power of the purse is to ensure that programs are vetted and authorized before they are eligible for taxpayer dollars.