During the COVID crisis, Congress passed laws providing trillions in new spending, most of which was made available on a short-term basis to alleviate the immediate emergencies due to the pandemic and the shutdown of parts of the economy. The spending for temporary measures such as the Paycheck Protection Program, the Shuttered Venue Operators Grant program, or the billions in aid to states have naturally wound down. Yet the Biden administration has recently tried to claim credit for this temporary drop in the deficit rather than making a genuine effort to reduce spending in the long run.

Over the past two years, Congress has made no meaningful attempts to reduce deficits in the short term. Packages such as the American Rescue Plan Act and the Inflation Reduction Act (IRA) actually increased spending over the next few years, while the IRA’s new taxes and deficit reduction won’t kick in until 2023 or later. Many of the IRA’s offsets were also gimmicky in nature.

The federal budget deficit remains extremely high, weighing at $1.4 trillion for fiscal year (FY) 2022, down from $2.8 trillion in 2021. By contrast, the deficit was $984 billion in 2019 before COVID-19 hit. Moreover, the Congressional Budget Office’s (CBO) budgetary outlook foresees deficits continuing to rise over the decade, driving the national debt to $40 trillion — or 110 percent of projected GDP — in 2032.

To help stem the tide of red ink, Rep. Jodey Arrington (R-TX) introduced the Controlling America’s Perilous Spending (CAPS) Act to set in place an annual ceiling on discretionary spending through 2032. As the budgetary stats and figures above attest, the title of the proposal is no exaggeration about the risks of allowing the persistence of annual deficits in excess of $1 trillion. If enacted and maintained, Arrington’s reform proposal would slow the growth in spending, trimming $465 billion from federal deficits over the next decade. There would be additional savings from reduced debt service costs of $46 billion.

Arrington’s bill, introduced in the House of Representatives as H.R. 9032, would establish discretionary caps as a fiscal guardrail to unchecked federal spending. The text of the bill sets dollar figure limits for certain discretionary spending from 2023 through 2032. The caps exclude amounts provided through the Infrastructure Investment and Jobs Act and emergency spending in CBO’s projection.

The text of the bill also notes that the caps were based on CBO’s May 2022 outlook and that the “discretionary caps in the bill may need to be amended to incorporate subsequent baseline changes prior to becoming law.” This would account for additional spending enacted by Congress since CBO’s last baseline projection.

In addition, Rep. Arrington wrote in a press release that the proposal “does not make immediate cuts to spending – it slows the annual growth rate of spending over the next decade.” For that reason this report assesses Arrington’s caps for years starting in FY 2024. 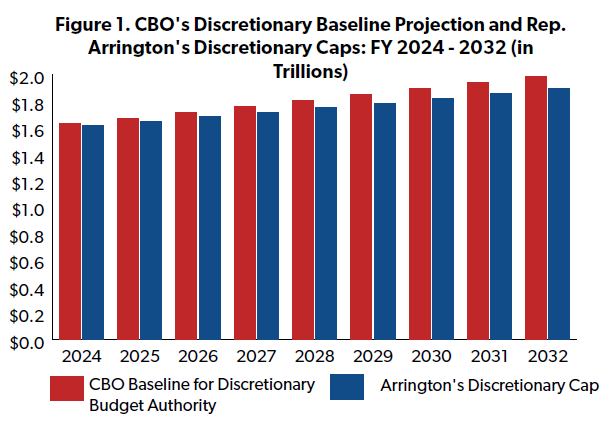 CBO’s May 2022 baseline projects that the discretionary spending covered by Arrington’s cap will grow by 2.5 percent per year, on average, through 2032, amounting to a total of $16.3 trillion in outlays over the course of the decade. Under Arrington’s cap, spending will still grow, but at a slower rate of two percent per year for a total of $15.8 trillion over the decade.

Relative to CBO’s baseline, the slower growth under the caps will save $465 billion. The savings highlight that small changes enacted over the short-term to reduce spending will have a larger impact over the decade if lawmakers maintain budget discipline.

Though Congress has put in place budget enforcement laws in the past, they have failed to have much impact because Congress then votes to override them. Budget caps were last active through 2021 under limits established in the Budget Control Act (BCA) of 2011. Congress voted to raise the caps five separate times from 2012 through 2019. Many of these deals matched spending increases in the short term with corresponding offsets over a longer period of time, including some gimmicks or questionable policies such as extending customs user fees or drawdowns of the Strategic Petroleum Reserve.

An advantage of budget caps is that they provide lawmakers with a say in how to allocate taxpayer dollars under established limits rather than resorting to the backstop of across-the-board cuts through sequestration. This is especially preferable given the restrictions on current pay-as-you-go rules that limit the application of this enforcement mechanism.

To achieve the restrictions set in place by budget caps, the authorizing committees should take a close look at the programs under their jurisdiction and either reform, reduce, or eliminate ones that do not work or that are duplicative of more efficient programs. The bipartisan budget proposal of 2019 jointly introduced by former Senate Budget Committee Chair Mike Enzi (R-WY) and Sen. Sheldon Whitehouse (D-RI) would have tasked these authorizing committees to report on their plans for considering the unauthorized programs under their jurisdiction. It also required the committees to detail “their plans for improved government performance based on their review of relevant Inspector General and Government Accountability Office reports and recommendations.”

The House could also bring back a reform from the 104th Congress and revive the “Corrections Calendar.” As NTUF wrote back in 2010:

“… [T]he ’Corrections Calendar’ set up time on the floor of the House of Representatives to repeal or amend laws that were considered outdated, harmful, or unnecessary. Its origins stem from the “Consent Calendar,” which was created in 1909 as a way to speed up action on noncontroversial legislation. During two days each month, legislation could be passed quickly by unanimous consent of lawmakers without amendment. As other procedures were employed to expedite legislation, the Consent Calendar fell out of use. During the 104th Congress, the Consent Calendar was abolished and replaced with a Corrections Calendar, which was utilized to repeal or revise laws and regulations. Then-House Speaker Newt Gingrich remarked that it would comprise a system to identify “the dumbest things the federal government is currently doing and just abolish them.” Eventually, this process also fell into disuse. The last time the House Corrections Calendar Office was staffed was in 2003.”

Adherence to Arrington’s discretionary spending caps will also lead to additional savings on federal debt interest payments. Under CBO’s most recent projection, interest payments on the federal debt will total $8.1 trillion over the next decade, growing from $442 billion in 2022 to $1.2 trillion in 2032. By this time, it will grow larger than the projected defense spending that year of $998 billion. The interest payments will also represent an albatross around the necks of future generations of taxpayers who will be stuck with a higher tax burden to pay for today’s profligate spending. 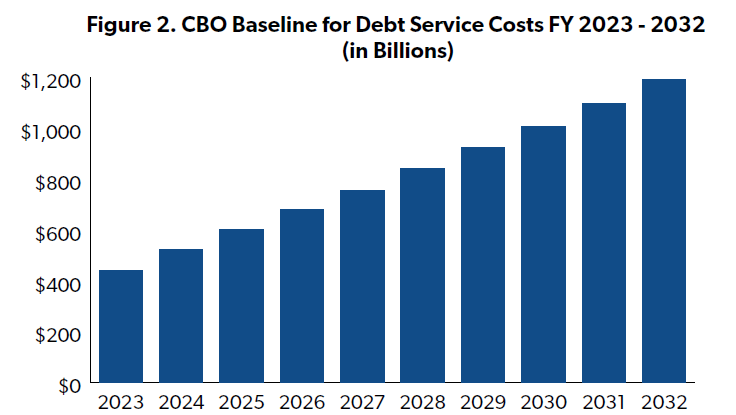 CBO recently published an interactive worksheet that allows users to calculate how changes to outlays will impact these mandatory debt interest payments.

The slower spending growth in Arrington’s bill will save taxpayers $46 billion in debt service costs over the decade. Combined, the caps and impact of those limits on interest payments will save a total of $511billion. 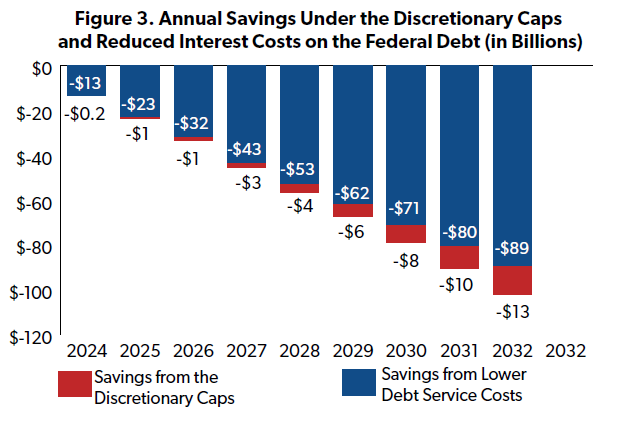 Setting in place discretionary caps would represent a starting point for Congress to re-establish fiscal guardrails. After all, discretionary spending comprises 30 percent of the budgetary pie this year. With an aging population, mandatory spending through programs such as Social Security, Medicare, and Medicaid will continue to rise as a share of the federal budget, as will the mandatory interest costs for financing the national debt.

Lawmakers should work across the aisle as part of a larger effort to comprehensively fix the broken budget process. If that proves too heavy a lift, lawmakers should take some incremental steps to restrain the growth of spending, and Rep. Arrington’s CAPS Act is a good policy outline Congress can work with.