The Congressional Budget Office's (CBO) new long-term budget projection shows that without a change of course, federal debt will grow from 98 percent of GDP this year to 185 percent of GDP in 2052. This fresh warning should give pause to Congress’s consideration of legislation to add $380 billion in deficit spending, which will worsen the budget outlook.

CBO's report includes a chart showing the level of publicly held debt as a share of GDP since 1940, recreated below in red. The previous high mark of debt was run up because of World War II, when it surpassed 100 percent of GDP in 1945 and 1946. 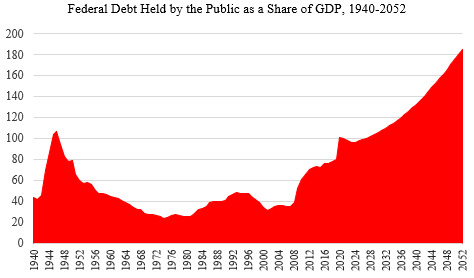 In the post-war period, debt receded to 23 percent of GDP in 1974 before trending upward again. Because of the economic effects of the pandemic and the legislative packages such as the CARES Act, debt again exceeded GDP in 2020. The years since then have seen a gradual decline in debt relative to GDP, but budget trends show that this period of relief is transitory and annual deficits will send federal debt to new record heights.

Driving the growth in annual deficit spending are the usual suspects that have for some time been responsible for an increasing share of the budget:

Ultimately, the root of the problem is that the government spends too much. CBO projects that from FY 2023 through 2052 outlays will average 25.9 percent of GDP per year, far exceeding the annual inflow of tax revenues, which will average 18.5 percent. For perspective, since 1972, spending has averaged 20.8 percent of GDP and revenues have averaged 17.3 percent.

The long-term outlook is actually slightly less bad than last year when CBO saw debt exceeding 202 percent of GDP in 2051. In its May 2022 baseline, CBO noted that tax revenues over the past few years have been higher than anticipated, and CBO’s long-term projection sees this trend continuing. Last year's long-term outlook projected average annual revenues of 17.8 percent through 2051.

This just goes to illustrate that small changes to reduce spending now can lead to a significant improvement in the long-term budget outlook. The longer Congress puts off budget reforms, the worse the problem will get, leading to slower economic growth, higher interest payments on the U.S. debt (including payments to foreign holders), and limited fiscal options to respond to the next unexpected crisis or emergency.