As Sen. Joe Manchin (D-WV) negotiates a ‘slim’ reconciliation package with Senate Majority Leader Chuck Schumer (D-NY) and other Democrats in the U.S. Senate, the key moderate holdout has emphasized deficit reduction as one of his top goals.

Unfortunately, three bills the Senate may consider and pass in the next two weeks alone would add more to deficits than Sen. Manchin has proposed reducing through reconciliation. (And now reconciliation is up in the air, with Sen. Manchin’s recent COVID diagnosis.)

Three major bills the Senate may consider before its August recess, in addition to reconciliation, are the CHIPS Act (semiconductor subsidy legislation), the Honoring Our PACT Act (veterans’ health legislation), and the INSULIN Act (capping out-of-pocket costs for insulin). Each bill is bipartisan and, if it comes to a vote in the Senate, would likely pass the chamber with votes from Democrats and Republicans.

The three bills combined would add $376 billion to federal deficits over the next 10 fiscal years (FYs 2022 through 2031). The Honoring Our PACT Act would contribute $276.6 billion, or nearly three-quarters of this burden, to 10-year deficits (after subtracting current-law discretionary spending from the direct spending totals in the Congressional Budget Office’s cost estimate), while the CHIPS Act would contribute another $70 billion and the INSULIN Act around $20.5 billion.

Regardless, the above package of bills in the Senate would more than undo either effort towards deficit reduction. Even given the savings from Manchin’s reconciliation proposal, under CBO scoring conventions (and there’s at least one major gimmick in the current reconciliation package), and assuming just $40 billion in ACA spending as targeted by Sen. Manchin, the four bills (CHIPS, PACT, INSULIN, and reconciliation) would, on net, still end up increasing deficits $129 billion over 10 years. 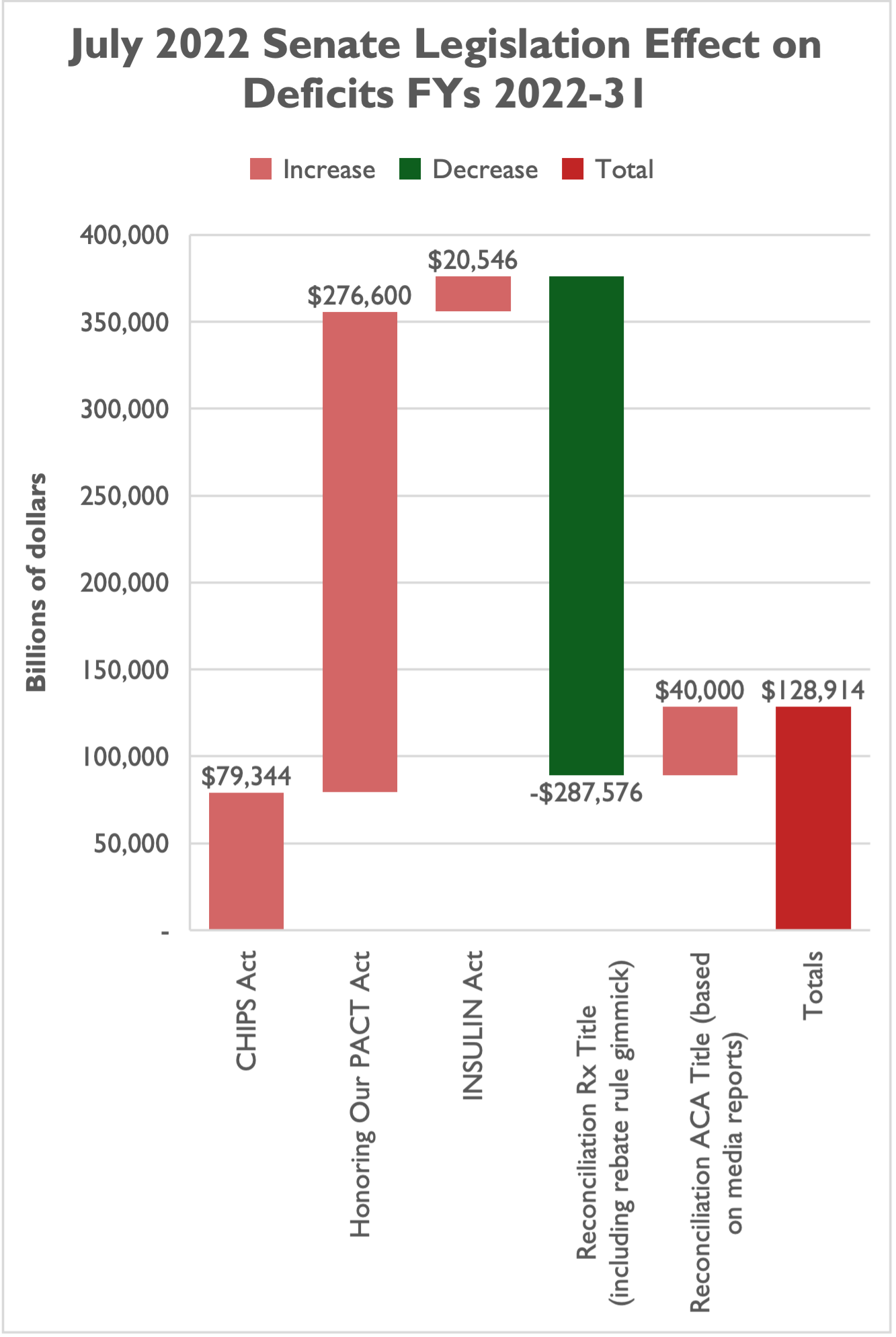 Few things sum up how Washington works better than a Senator’s insistence on deficit reduction being more than undone by just a couple weeks’ worth of legislating.

Under alternate, more realistic assumptions — specifically, that 1) Democrats will push for three years of ACA subsidy extension as passed by the House in the Build Back Better Act, and 2) that the rebate rule repeal gimmick does not actually reduce deficits, despite CBO scoring conventions – deficits increase $285 billion over 10 years. 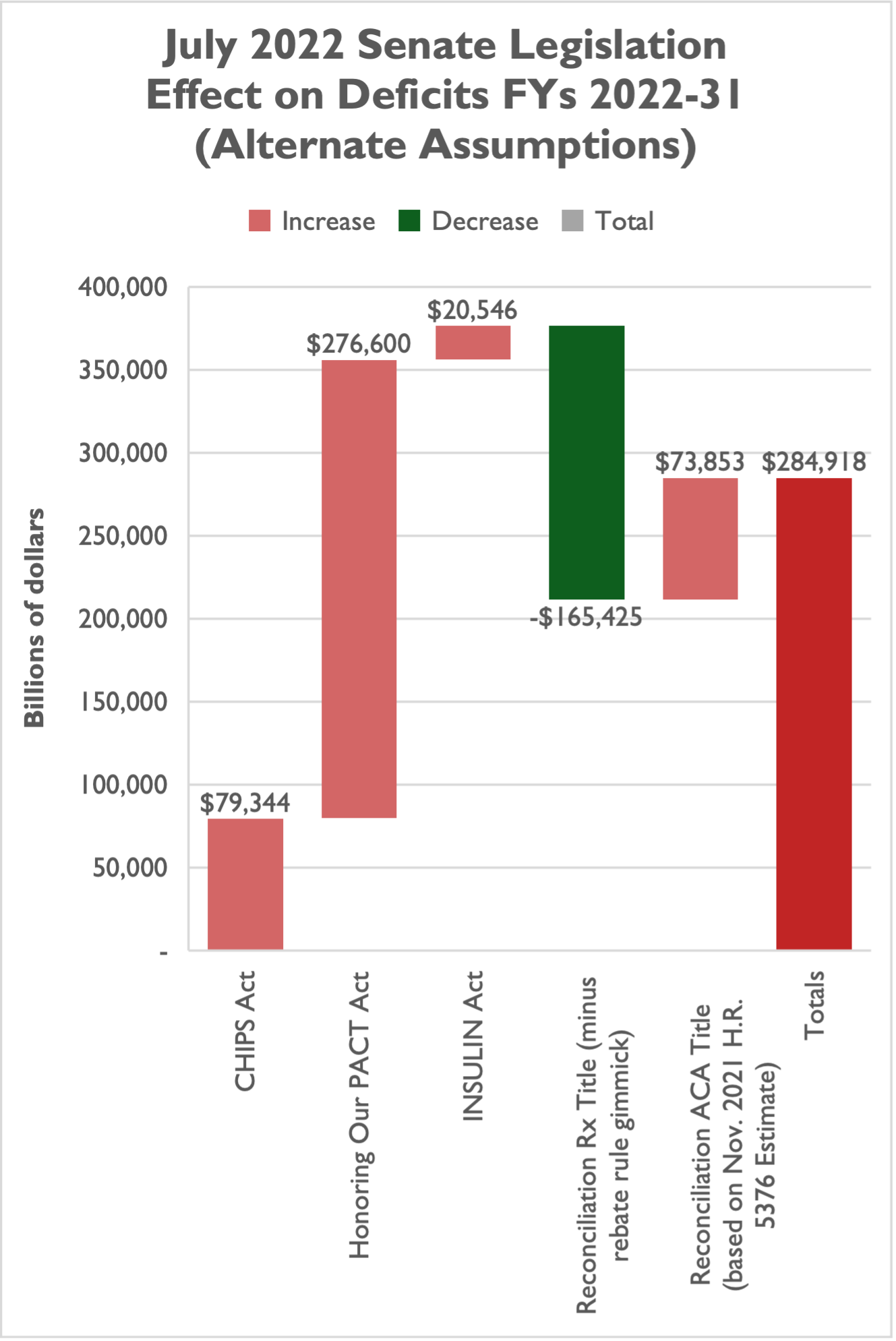 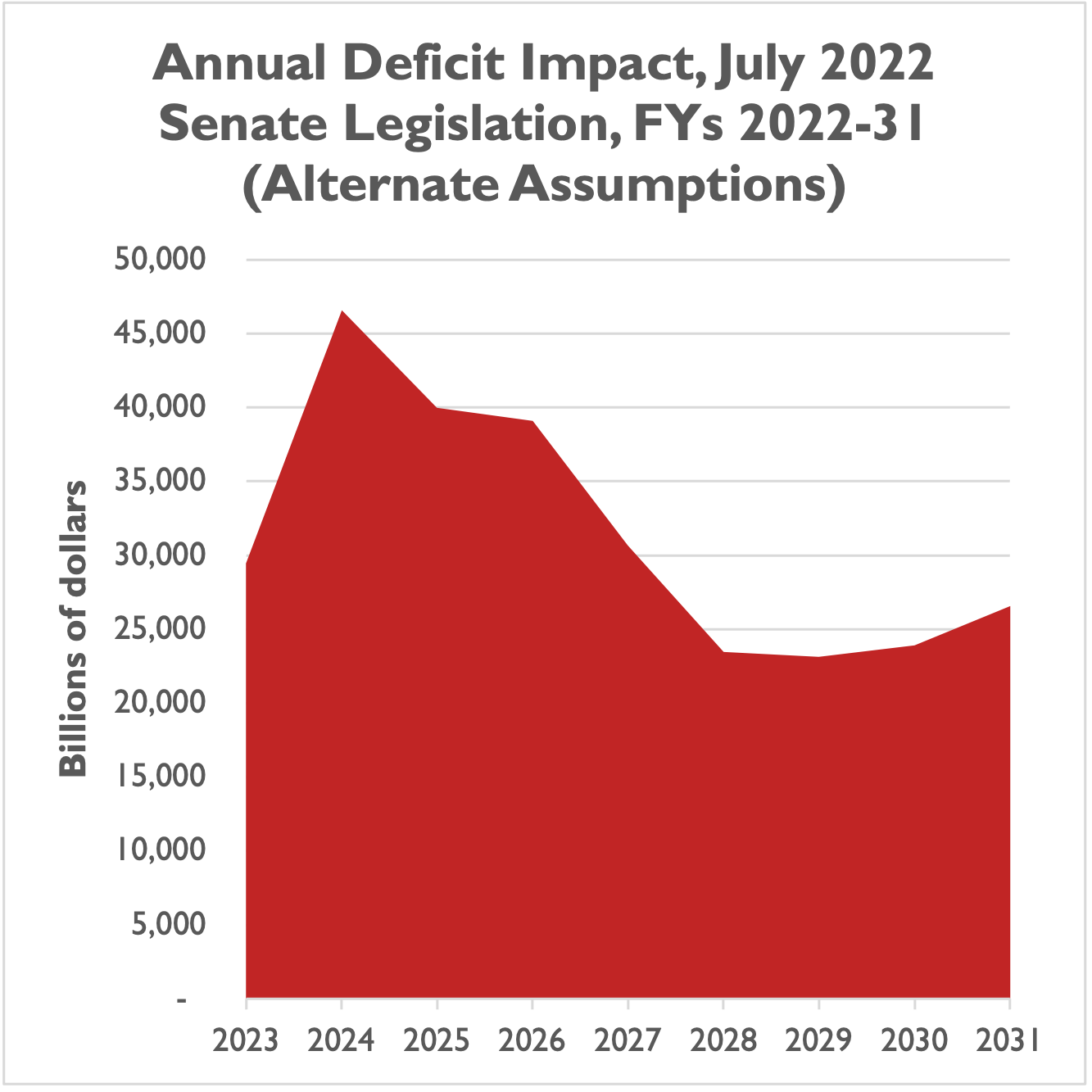 While deficit increases in the tens of billions of dollars may not contribute significantly to inflation in the broader U.S. economy, these deficit increases certainly will not help curb inflation, contrary to the promises of policymakers regarding the CHIPS Act and reconciliation.

Unfortunately, additional spending is fast on the horizon too. House appropriations bills are spending tens of billions of dollars above FY 2022 enacted levels, bipartisan majorities in Congress are ready to green-light defense spending increases at similar levels, and the CHIPS Act includes $200 billion in authorized spending that doesn’t yet increase deficits, but could do so in the future. Taxpayers are getting hammered left and right, and even setting aside the harmful prescription drug price controls in reconciliation, it’s clear this legislation will provide no real deficit reduction after accounting for other big spending bills.