The report resulted from an investigation initiated under Section 232 of the Trade Expansion Act of 1962. The Trump administration was supposed to have released it last year but failed to do so, and it never imposed the recommended tariffs -- perhaps because the rationale for trade restrictions was incredibly weak. As Sen. Pat Toomey (R-PA) suggested: “The justification for these tariffs was so entirely unfounded that even the authors were too embarrassed to let it see the light of day.”

The Section 232 report concludes that the “‘displacement of domestic products by excessive imports’ – in particular the displacement of automobiles and certain automobile parts manufactured by American-owned firms – is causing a ‘weakening of our internal economy’ that ‘may impair the national security.’”

This conclusion is backwards. For example:

Domestic production of motor vehicles is strong and growing. According to the Section 232 report: “The strength of the U.S. automotive industry has weakened since 1985.… [P]roduction by domestic automobile producers declined from 11.4 million units in 1985 to 10.9 million units in 2017…. [T]he U.S. automobile market is experiencing a decline in demand and contracting due to excessive imports.”

More significantly, cars and trucks have improved dramatically since 1985, and as a result the value of domestically produced vehicles is much higher now than in 1985. Looking at the real value of U.S. motor vehicle production reveals a much different -- and more accurate -- story than the “decline” alleged by the White House.

More recently, Americans produced 3.1 million more vehicles in 2019 than in 2010 as the inflation-adjusted value of U.S. car and truck production increased by 59 percent.

These big increases partly reflect the country’s recovery from the Great Recession. Even so, the U.S. automobile industry was strong and growing before the COVID pandemic hit.

Nearly all cars and trucks purchased by Americans are made in the USA or supplied by our close allies. The Section 232 report alleges that imports threaten our national security. Unless the EU and Japan are national security threats, this claim is ludicrous.

In 2019, the United States produced 10.9 million cars and trucks. Americans imported another 8.3 million vehicles. Canada, Mexico, Japan, Korea, and the European Union (EU) supplied 97.8 percent of these imports and 88 percent of imported motor vehicle parts. (Note: Import figures are based on the harmonized tariff system codes specified in Appendix B of the Section 232 report.) 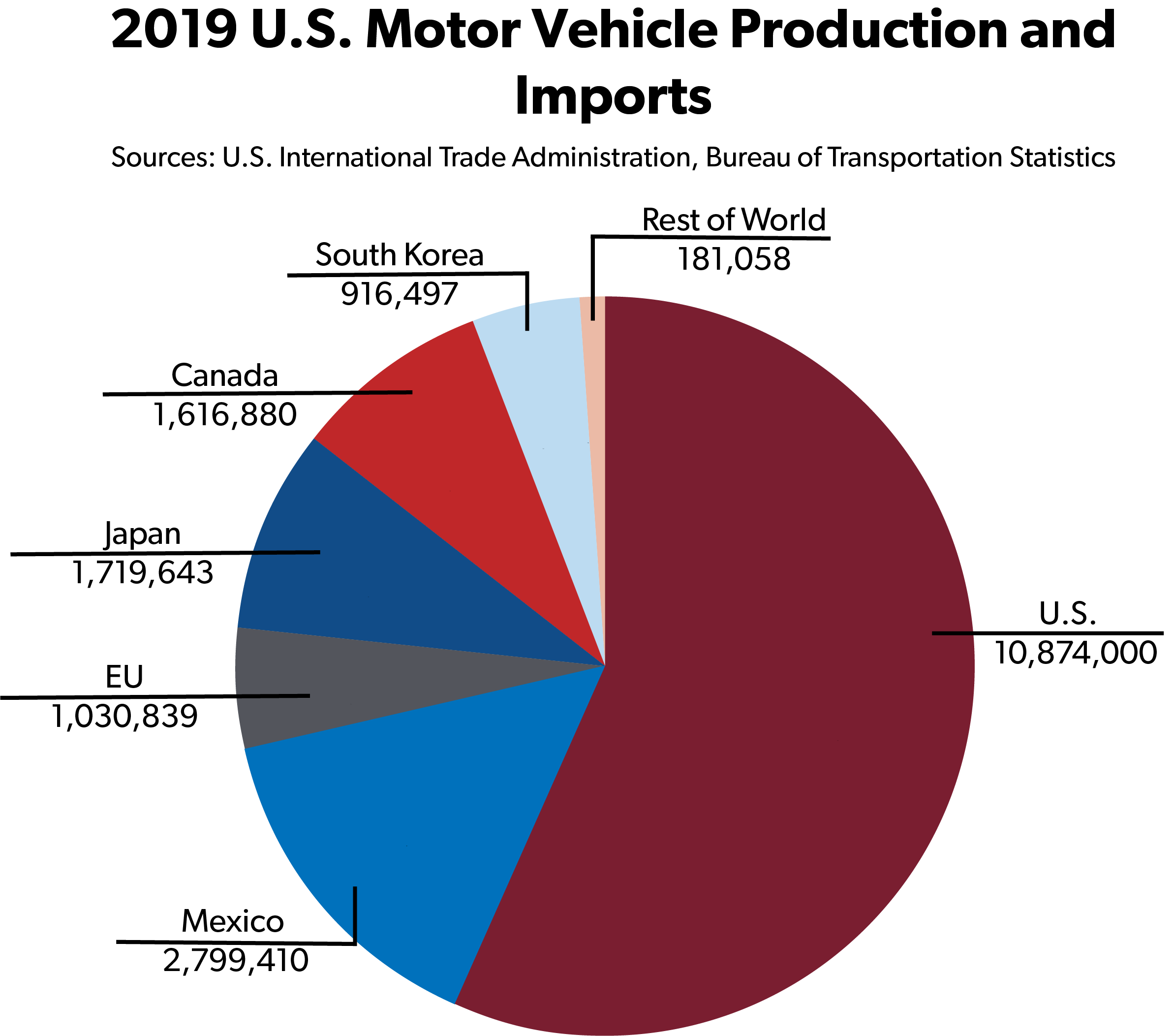 Imposing “national security” tariffs on our allies would have weakened U.S. national security. The Trump administration proposed to exempt much production from Canada and Mexico from new tariffs. Japan, Korea, and the EU were not so lucky.

These are the countries we should be attempting to work with to address American priorities with respect to China, preventing the proliferation of digital services taxes levied on U.S.-based companies, and other national priorities. Picking a trade fight with them makes it harder to achieve U.S. goals.

Tariffs on imported parts would have harmed U.S. auto workers. The Trump administration’s proposal to impose tariffs of up to 25 percent on engines and parts, transmissions and powertrain parts, and electrical components would have made it more costly to assemble vehicles in the United States, directly threatening the livelihoods of American auto workers.

As the Section 232 report points out: “In fact, every U.S. producer of passenger vehicles -- whether American-owned or foreign-owned -- imports a significant volume of automobile parts for its vehicle production operations in the United States.” The smart move would be to eliminate tariffs on those parts in order to encourage domestic production of cars and trucks, promote affordability, and create jobs for auto workers.

Texas and Alabama do not threaten U.S. economic security. According to the Section 232 report, “in a time of national emergency, foreign-owned suppliers operating in the United States may not be reliable sources of equipment.”

It is a slap in the face to workers in places like Texas (where Toyota Tundras are produced) and Alabama (home to Mercedes, Hyundai, and Honda factories) to suggest they can’t be relied on can’t be relied on in the case of a national emergency.

Foreign-owned companies have brought with them innovations ranging from lean manufacturing to apprenticeship programs to cutting-edge technologies that have strengthened the U.S. economy -- not weakened it.

Foreign investment further enhances U.S. security by making it in our allies’ self-interest to help us -- along with their companies located here -- in the event of a national emergency.

Making cars and trucks more affordable for hard-working American families is a benefit of trade, not a cost. International trade and investment provide U.S. consumers with competitive and high-quality vehicles and encourage domestically owned companies to innovate.

In the words of car enthusiast Adam Carolla: “American car companies have never been better, and don’t tell me you wouldn’t be putting out Matadors and Gremlins 25 years later if it wasn’t for the Camry and the Sentra.”

National Taxpayers Union Foundation estimated that a 25 percent tariff could have increased the average cost of imported cars, trucks, and SUVs by $4,205 to $5,089, and boosted the price of domestic cars by $1,262. The 35 percent tariff on SUVs and CUVs recommended in the Section 232 report would have been even more costly.

But the car-tax report matters because it reflects the same kind of shoddy reasoning that led the Trump administration to impose tariffs on steel, aluminum, and motor vehicle parts -- tariffs that the Biden administration continues to assess at the expense of U.S. auto manufacturing.

According to the American Automotive Policy Council, which represents Fiat Chrysler Automobiles (now Stellantis), Ford, and GM: “Inevitably, the imposition of across the board higher tariffs or other restrictions on imports of steel into the United States would only widen the existing price gap by increasing the price of U.S. steel and thus the cost of U.S.-built vehicles.” Additionally, “Across-the-board-tariff hikes or other trade restrictions on imports of aluminum would inevitably reduce the competitiveness of domestic aluminum-consuming industries, particularly the automotive industry.”

According to the Motor & Equipment Manufacturers Association regarding tariffs on Americans who import goods from China: “The proposed 25 percent tariffs on motor vehicle materials, subcomponents, and parts will cause disproportionate harm to U.S. interests by disrupting American manufacturing operations and increasing costs, both to U.S. producers and consumers.”

Unfortunately for U.S. autoworkers, the Biden administration has thus far refused to end most of the self-destructive tariffs it inherited from President Trump. If he were serious about actually pursuing a “worker-centered trade policy,” President Biden would have eliminated these taxes on steel, aluminum, and motor vehicle parts.

Congress can improve things significantly by making any future tariff increases contingent on congressional approval. Regardless of which party occupies the White House in 2024 and beyond, no individual should have the authority to weaken our national security by unilaterally disrupting the operation of a major American industry like auto manufacturing.