Advocates for bigger government continue to press their case for higher taxes because, they argue, the “rich” are not paying their “fair share.” However, a review of the actual tax statistics undercuts this argument, or at least raises questions about how to define “fair.” The IRS figures for Fiscal Year 2013 (the most recent set of data available) show that the richest Americans bear a disproportionate share of the federal income tax, and despite a tax hike that went into effect, that share was smaller than the previous year.

One year of data does not make a trend, but for 2013 at least, the conclusion is pretty stark: after President Barack Obama got his way and Congress raised tax rates on the wealthy, the top 1 percent shouldered less, not more, of the tax burden.

The richest 1 percent of income earners in the U.S. paid 37.8 percent of all income taxes, down slightly from last year’s mark of 38.09 percent. The share of taxes paid dropped despite a new higher tax rate of 39.6 percent on income above $450,000. The amount of taxes paid by those in this percentile is nearly double their Adjusted Gross Income load. 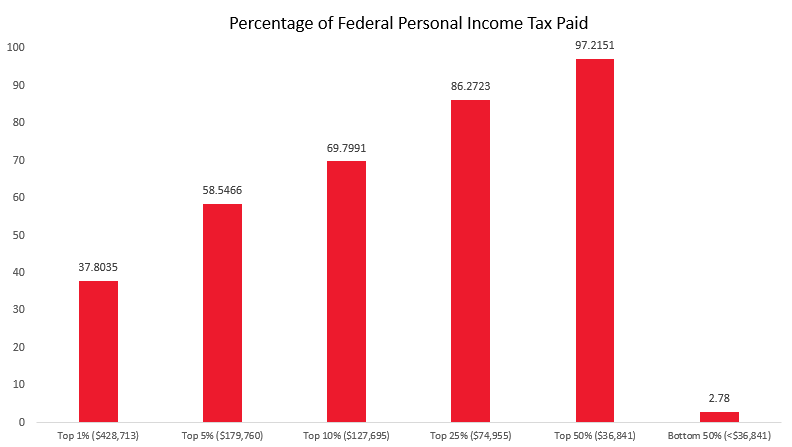 The top tenth of filers paid nearly 70 percent of all income taxes. One-quarter of all income earners were responsible for 86 percent of all taxes and the upper half accounted for nearly the entire burden at over 97 percent. The bottom half of all earners contributed less than 3 percent.

One of the most popular features on the NTUF website is “Who Pays Income Taxes?” The page contains a series of charts tracking the distribution of the federal income tax burden over the past several decades. These snapshots continue to depict two common-sense trends: when people are allowed to keep more of their own money, they prosper, and once prosperous, they pay a bigger part of the bill for those who aren’t.

The chart below features the share of taxes paid by income percentiles from 1980 to 2013. 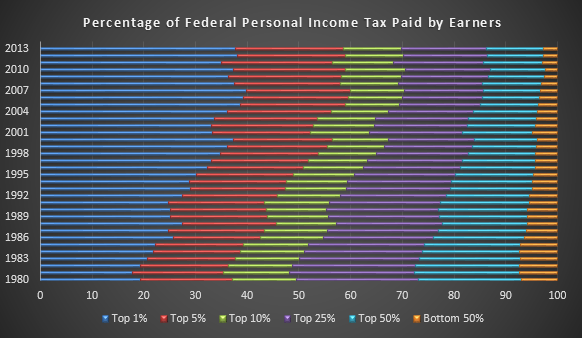 Since 1980, the tax burden has shifted significantly upward while the load on lower half of all earners was eased by over half. This is not to say that those in the lower income brackets should be paying more in taxes. A fair tax system eases the burden on those struggling to make ends meet and earn their way up the economic ladder.

Those who complain that the wealthy are not paying their “fair share” ought to explain two things. First, exactly which income groups do they consider “wealthy”? The IRS’s cutoff to be included among the top quarter of all earners is $74,955. And second, they should explain how much higher of a burden would be “fair.”

The higher taxes sought under the “fair share” rallying cry run the risk of undermining economic growth and job creation. Equity is an important part of a tax system and as the data reflects, our system is quite progressive. The system should also encourage individual achievement and economic growth.

With your help, NTU Foundation can continue to track federal tax trends and hold your elected officials accountable. Please consider making a tax-deductible donation to support our work.