As appropriators and authorizers in Congress hammer out the final details of bipartisan spending and defense policy legislation to be considered before the December holidays, it appears the Pentagon has thrown a giant, $25 billion wrench in the process.

According to Bloomberg Government (story paywalled), the Pentagon sent a “new $25 billion wish list of programs” to Congress – a highly unusual practice given the military branches and combatant commands already delivered their statutorily-required fiscal year (FY) 2023 wish lists to lawmakers in the spring. This double dip at the wishing well appears to have no modern-day precedent, and may be shaped at pushing the Pentagon’s budget topline even higher just as Republicans and Democrats are attempting to reach a compromise.

NTU and NTU Foundation have warned lawmakers for years that the wish list practice makes for irresponsible budgets, and we have asked Congress to cut down on the number of wish lists required by law. Wish lists put unnecessary upward pressure on the Pentagon topline at a time when there’s no cap on defense or any other government spending. They also undermine civilian control of the military, distort budget decision-making at the Pentagon and on Capitol Hill, and make the defense budget process less transparent for watchdogs and taxpayers.

Bloomberg Government’s Tony Capaccio and Roxana Tiron report that the majority of this new wish list request – $19.3 billion out of $25 billion, or around 77 percent – is to counteract the effects of inflation. 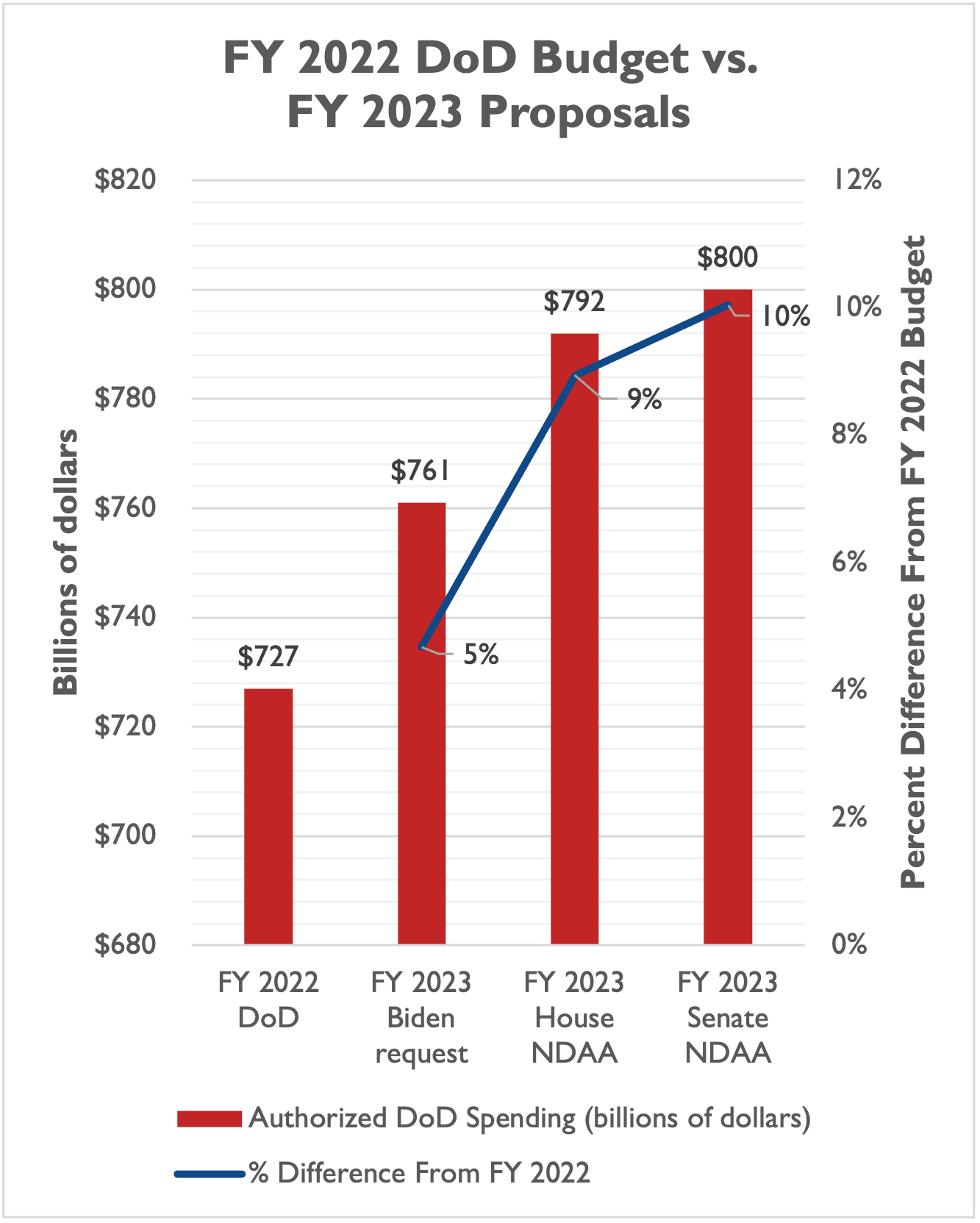 Of note, significant portions of the proposed increases in the House and the Senate NDAA can be attributed to either the first round of wish lists – which totaled $24.3 billion – or to the effects of inflation.

In other words, Congress has already approved much of what DoD wanted in the first round of wish lists, and it has already green-lit the Department for an inflation adjustment. The last-minute timing of this second wish list suggests that it has more to do with the ongoing Congressional negotiations over the Pentagon topline than it does truly urgent needs that the military needs fulfilled in the next few weeks.

Before the delivery of this second wish list, budget observers had anticipated a final DoD topline somewhere in between the House-approved $792 billion and Senate-approved $800 billion numbers. The two chambers were only $8 billion apart, so $796 billion would have been a reasonable prediction for a ‘compromise’ topline.

The new wish list could provide literal and figurative ammo, though, especially for the defense hawks who always push for a higher defense topline.

If Congress applies the $25 billion in new DoD wishes on top of that midpoint, $796 billion topline level, the DoD topline may settle at an astounding $821 billion. That would be a full $94 billion, or 12.9 percent, higher than FY 2022 levels – and several points higher than even generationally-high levels of inflation. It’s hard to tell whether or not Congress has already provided the funding for some of these new wish list items, because the public does not have access to the full list. 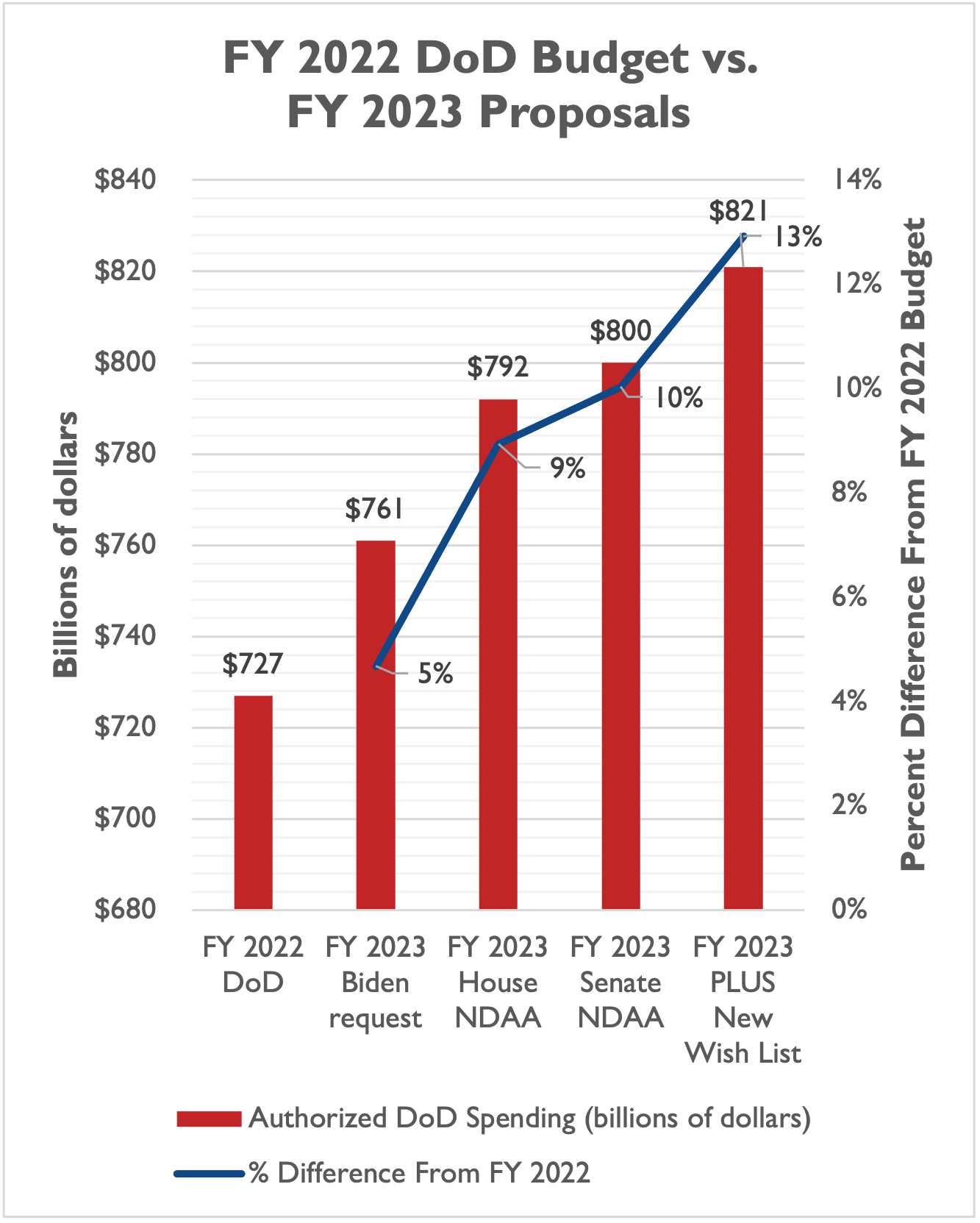 The latest misuse of the wish list process underscores Congressional efforts to reform the practice at DoD. Sens. Elizabeth Warren (D-MA), Mike Braun (R-IN), and Mike Lee (R-UT) have introduced legislation in the Senate to 1) repeal the statutory wish list requirements in law and 2) require wish lists that remain to be paired with suggested offsets to the increased spending amounts. NTU leads a coalition of 11 ideologically diverse organizations in support of this legislation.

The second Warren-Braun-Lee bill would also require consistent public reporting of wish list requests for the first time. This is urgently needed, as underscored by this double-dip wish list from DoD – few members of the public have seen the actual wish list request, and instead taxpayer and budget watchdogs must rely on news reports to determine what is in it.