The 2016 campaign is soon headed for the final stretch after the party conventions next month. As the President-elect is transitioned into the White House next year, President Barack Obama will join the elite club of Former Presidents. And as a member of that club he will be entitled to all its benefits.

They are also eligible for additional benefits: 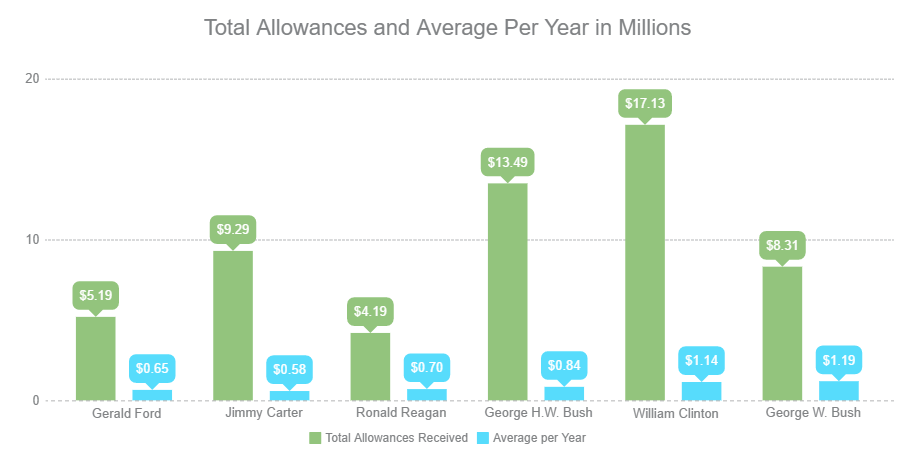 The chart above shows the allowances provided to former Presidents in 2015. Congress appropriated $3.3 million in FY 2015 to fund Presidential perks (in addition to the totals above, First Lady Nancy Reagan received $6,000 for communications expenses). The largest category of spending is for office space and expenses. President G.W. Bush spent $420,000 on his Dallas office, edging out President Clinton’s $414,000 space in New York City.

In FY 2016 $3.277 million was appropriated for allowances and benefits, however a breakdown of expenses per President is not yet available. The Administration’s budget for FY 2017 requests $3,865,000 for former Presidents. This 18 percent increase includes funding for “future former President Barack Obama.”

Following a Presidential election, there are additional transition expenses. The Presidential Transition Act authorizes funding to each outgoing President to cover expenses related to winding down matters of the outgoing Administration (limited to seven months) and to brief the personnel of the incoming Administration. The FY 2017 budget includes a transition request for $9.5 million, and an additional $7.5 million for “data migration services for processing the records of the department President and Vice President ... and for other-transitional-related administrative expenses.”

Since FY 2000, President Clinton has received $17.1 million in allowances, 30 percent of the amount allotted to all former Presidents in that time, and more than any other President. Next in line is George H.W. Bush who collected $13.5 million, followed by Jimmy Carter at $9.3 million. George W. Bush has received $8.3 million in allowances and benefits, fourth overall, but he has the highest average payment per year ($1.187 million).

The current election brings up an interesting question: Would Bill Clinton still receive allowances if Hillary Clinton is elected President? The law states that Presidents are eligible for benefits unless they hold “an appointive or elective office or position in or under the federal government ... .” Although there is a current “Office of the First Lady” within the Executive Office of the President, the position of First Lady – or possibly First Man – is not “appointive” in the sense that the law would recognize. NTUF assumes that the GSA would almost certainly give him deference to continue to receive allowances.

Before 1958, there was no retirement or benefit program available to former Presidents. The Former Presidents Act was passed to assist the financially struggling Harry Truman in his post-presidency. His circumstances were the exception, typically Presidents are quite wealthy. The four living ex-Presidents and the current President are all millionaires. Modern Presidents are also able to earn additional income in their post-Presidency via speaking fees and royalties from written memoirs or earnings from other private sources.

Savings options could include limiting or means-testing the pension levels, re-examining how long it should be necessary to provide office funding, or further capping the levels. Perhaps some of responsibilities performed by the subsidized offices could be consolidated into the respective Presidential libraries, yet another taxpayer-supported program for another day.

Reform legislation has been introduced in Congress as H.R. 1777 (which was passed by the House on January 11, 2016) and S. 1411. The Presidential Allowance Modernization Act would limit the pension a President could receive to $200,000. It would also limit the annual allowance for office space and other expenses to $200,000, and would further reduce that by the amount that a President’s adjusted gross income exceeds $400,000. The Congressional Budget Office estimates that these reforms would reduce spending by $11 million over the next five years.

Given the wealth of the retired Presidents and the chronic budget deficits, it bears asking whether taxpayers should be required to contribute support at current levels for benefits apart from Secret Service protection.