The typical fiscal year-end spending splurge, whereby agencies rush to expend leftover budget dollars in order to plus up the next year’s budget, is alive and well in 2019. As NTUF noted in an issue brief last month, government agencies face a perverse “use it or lose it” budget incentive to spend their money before the end of the fiscal year, lest the unused funds be returned to the Treasury and used to shrink the next year’s allocation. While full data for the 4th quarter 2019 splurge won’t be fully available for some time, a federal website reporting contract awards shows a nearly 75 percent spike in the final month of the last fiscal year compared to the average month.

In September, NTUF tracked historical agency spending data over the previous decade available from USASpending.gov to illustrate the 4th quarter surge that results under “use it or lose it” budgeting. If agencies spent at 4th quarter rates for the entire year, spending would have been $4.2 trillion higher over the last decade. Conversely, had they restrained 4th quarter spending to the average rate of the first three quarters, taxpayers would have seen savings of $1.4 trillion over ten years, or $144 billion per year on average. That’s roughly equivalent to the combined budgets of the Departments of Education, Homeland Security, and Justice.

While last year’s 4th quarter data is slowly being reported to USASpending.gov, information on many of the more expensive contracts awarded by agencies are published on the Federal Business Opportunities (FBO) website at fbo.gov. This site includes information on notices of proposed contract actions expected to exceed $25,000, as well as information on the awarded contracts (many of which are actually less than $25,000).

The figures below reflect the data as reported from searches on FBO for contract awards by date. While additional contract awards from FY 2019 are still being gradually posted to the site, the data is a snapshot from the afternoon of October 9, 2019. A final accounting of all contract awards would be expected to show an even sharper spike at the end of this past fiscal year.

September 2019 saw a steady weekly climb in the award of contracts reported on FBO as agencies rushed to use up their funds before time ran out. More contracts were awarded from September 22-30 (4,496) than the combined amount for the first two calendar weeks of the month (3,772).

The final week in the chart does include two additional days to close out the calendar month, but this does not skew the results: the spike in awards remains clear when considering  the daily average in each period (see Figure 2 below), with over twice as many per day at the end of the month (500) than at the beginning (242).

Over the last seven days of the fiscal year, 3,806 contracts were awarded, representing 5 percent of all contracts over the full fiscal year. This amount is over two and a half times larger than the number of contracts awarded during an average week (1,444).

Over the month of September, agencies awarded 10,865 contracts through FBO, a 42 percent spike from August’s total and 74 percent higher than the monthly average of 6,259 (see Figure 3). A quarter of all awards were made in just the final two months of the fiscal year. 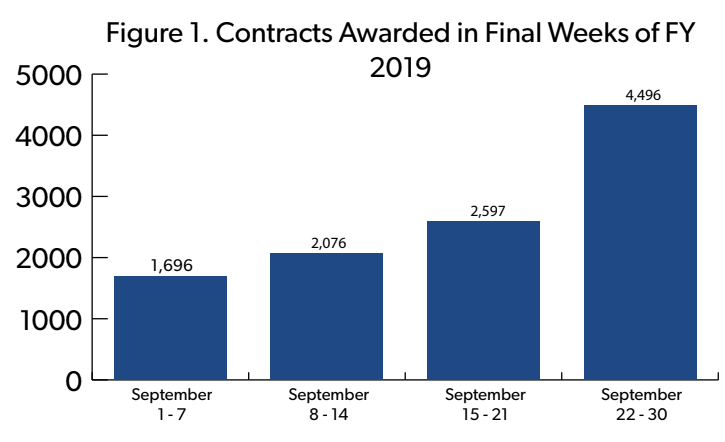 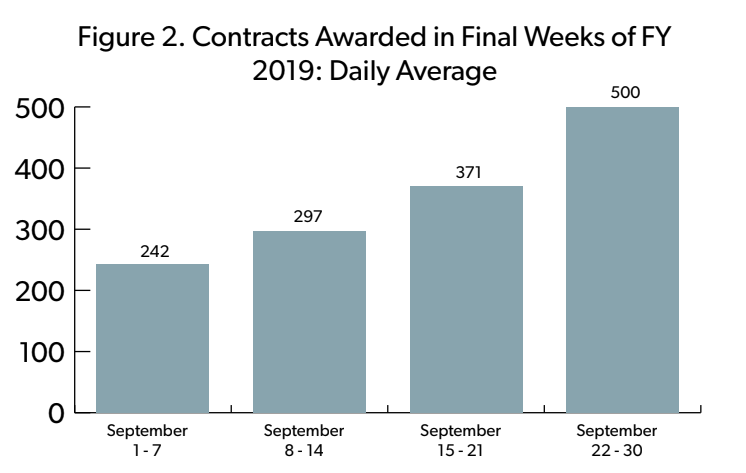 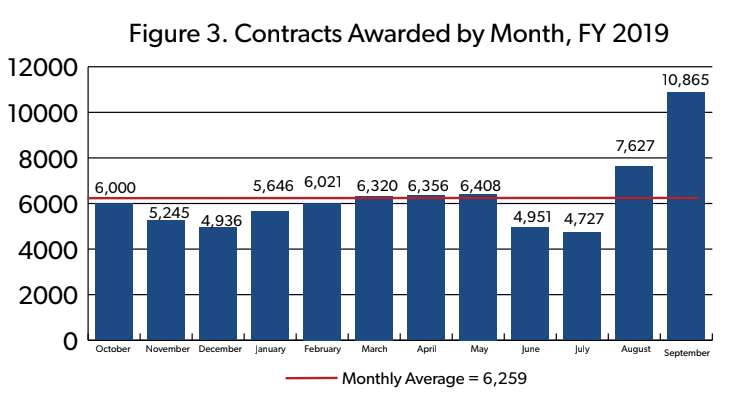 As we noted in last month’s issue brief, Senator Joni Ernst (R-IA) introduced S. 1238, the End-of-Year Fiscal Responsibility Act earlier this year to remove the incentives that contribute to the problem. It would limit an agency’s discretionary spending in the last two months of the fiscal year to the average it spent per month during the preceding 10 months. Representative Dan Crenshaw (R-TX) has now introduced companion legislation in the House, H.R. 4559.

The FBO site is currently one of ten different government websites managed by the General Services Administration that report federal grants or acquisition and awards processes. All of these different portals are in the process of being merged into a single website, currently in beta at beta.sam.gov, that will contain all of the current and historical data. With this improvement in transparency, it will be easier for taxpayers to see how their tax dollars are being spent. It will remain up to lawmakers to ensure that public funds are spent wisely and frugally.