The federal government is now closing out the fourth quarter (Q4) of the fiscal year, which means it is the season when federal agencies scramble to spend their remaining funds before they disappear. Federal agencies have a perverse “use it or lose it” incentive  during the fourth quarter since any unused funds are returned to Treasury at the end of the year. This leads to some truly staggering spending hikes to close the fiscal year as agencies scramble to spend taxpayer money as quickly as possible.

Unfortunately, this perverse incentive is a side effect of the budget process. If money appropriated to an agency by Congress for a given year is not obligated, the agency loses the money. Moreover, if an agency spends less than its allotted amount in a given fiscal year, Congress is less likely to authorize and appropriate an increase in funding to that agency in subsequent years.

Fourth quarter spending spikes have very real consequences for taxpayers—trillions of dollars that might not have been spent if agencies made expenditures based only on what was needed to execute on their mission.

A review of quarterly spending since 2008 finds that Q4 spending spiked over previous quarters by an average of 25.4 percent. If Q4 spending was restrained to hold the average of the first three quarters, taxpayers would have saved $1.4 trillion over ten years, or $144 billion per year on average. By contrast, if the higher Q4 outlay rates were applied to the other three quarters, spending would have been $4.2 trillion higher over a decade, or $432 billion per year.

Based on NTUF’s calculations, the Department of Justice (DoJ) and Department of State (DoS) are two of the biggest year-end spenders by percentage increase, with multiple spikes of over 600 percent in spending during the fourth quarter. While the DoJ and the DoS may not represent the largest dollar increase, the percentage spike is staggering.

This last-minute shopping by federal agencies risks wasting precious taxpayer dollars in service of bureaucratic self-preservation. Steps have been taken in recent years to curb federal expenditure, but as demonstrated in the data compiled by NTUF, the spending ambitions of Washington seem to have redoubled in the past few years. Congress should think carefully about what tools it has to encourage more responsible spending patterns.

NTUF tracked quarterly agency spending since 2008 as available on USASpending.gov.

The data is available thanks to the Federal Funding Accountability and Transparency Act of 2006 (FFATA), requiring federal loans, contracts, and grants be displayed publicly on a searchable web database. In order to exclude direct spending and entitlement benefits, this analysis only includes agency expenditure on “Contracts,” “Contracts/Indefinite Delivery Vehicles,” “Grants”, and “Other” as reported by the funding agency. When examining individual agencies, it is important to note NTUF analyzed contracts funded by each agency, rather than simply awarded. This prevents data from being skewed by agencies awarding contracts on behalf of other agencies. For more information on the distinction between these two terms, see USASpending.gov.

From fiscal year 2008 to fiscal year 2018, there has been an average increase in spending of 25.4 percent during Q4 compared to the first three quarters of the fiscal year. This data includes the only year (2010) that actually saw a decrease in overall spending during Q4. 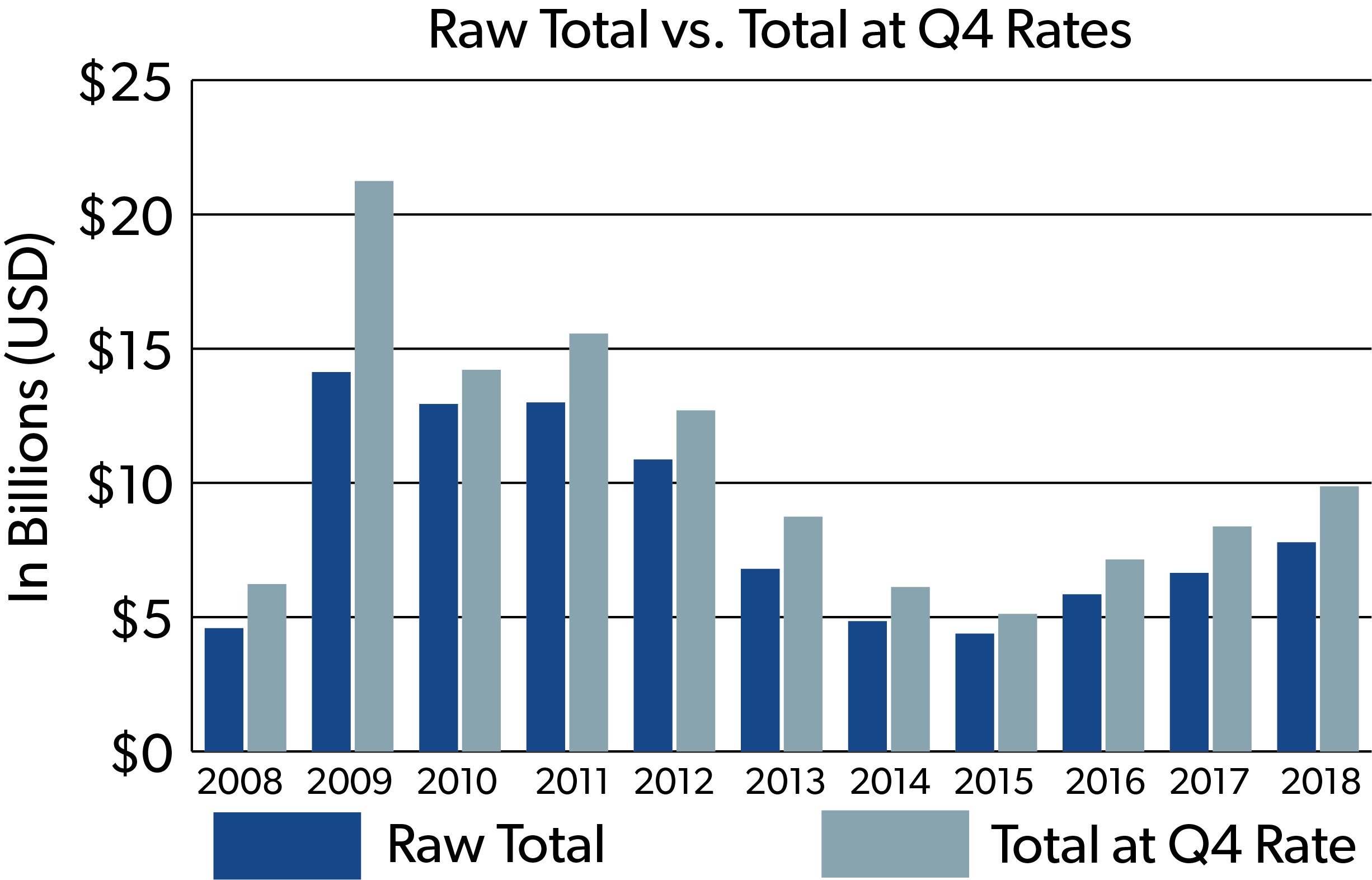 The single largest jump in federal spending between another quarter and Q4 came between Q2 and Q4 of 2009, with a spike of 175.4 percent. Displayed above are data from 2008-2018. The combined expenditure of all federal agencies in 2009’s final quarter was 50.3 percent higher on average than the first three. This may be attributable to the massive spending after enactment of the American Recovery and Reinvestment Act of 2009, the “stimulus” bill, which was signed into law that February.

The problem of end of year spending hikes can be further illustrated by comparing quarterly spending rates as a percent of total annual expenditure. Nine of the ten top quarters are Q4, with the lone exception being Q1 of 2010, due in large part to the outlays enacted through the stimulus package. 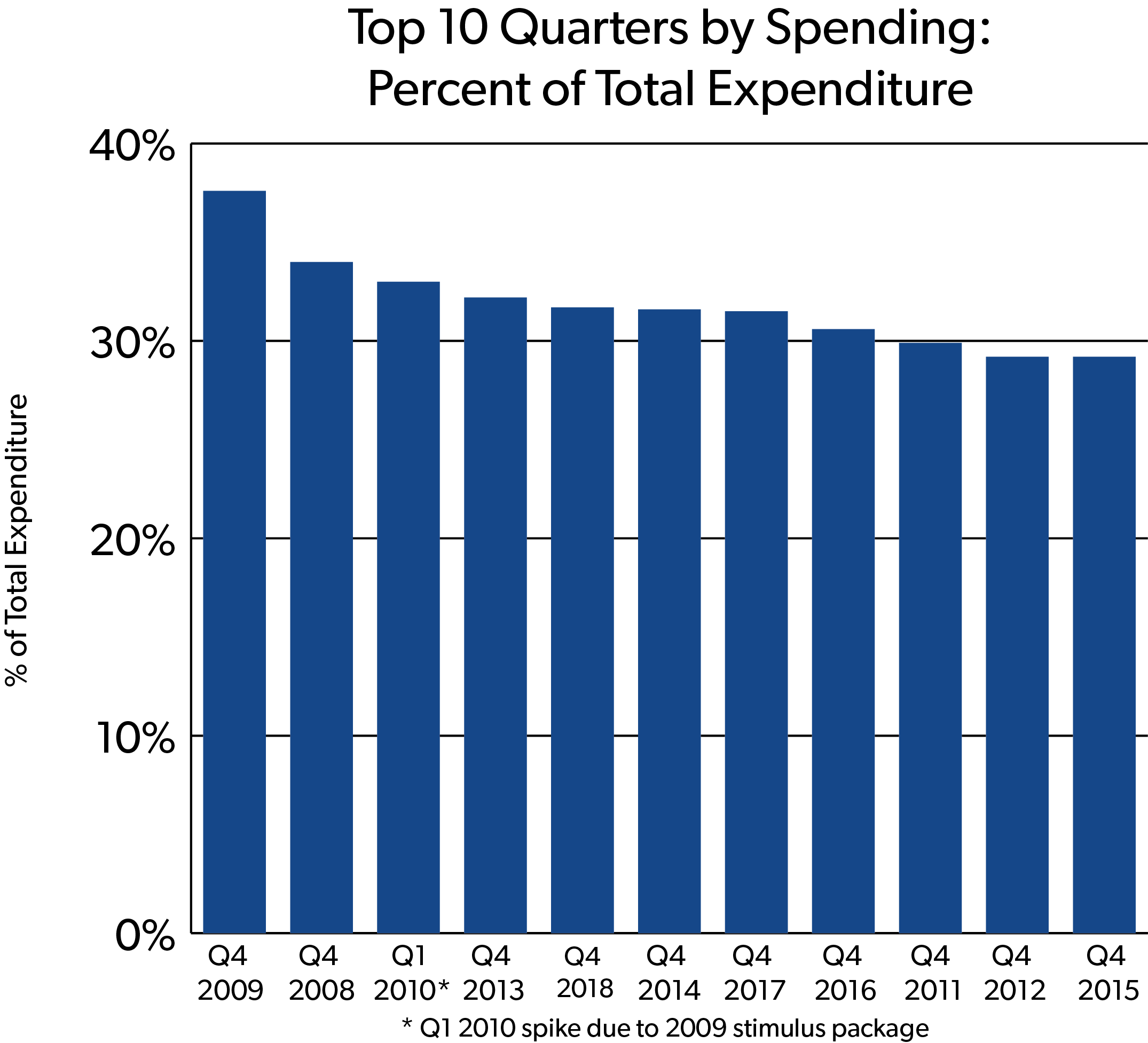 The data from USASpending.gov shows that the Q4 spending hikes occur across federal departments, but three of the worst practitioners are the Departments of State, Defense, and Justice. 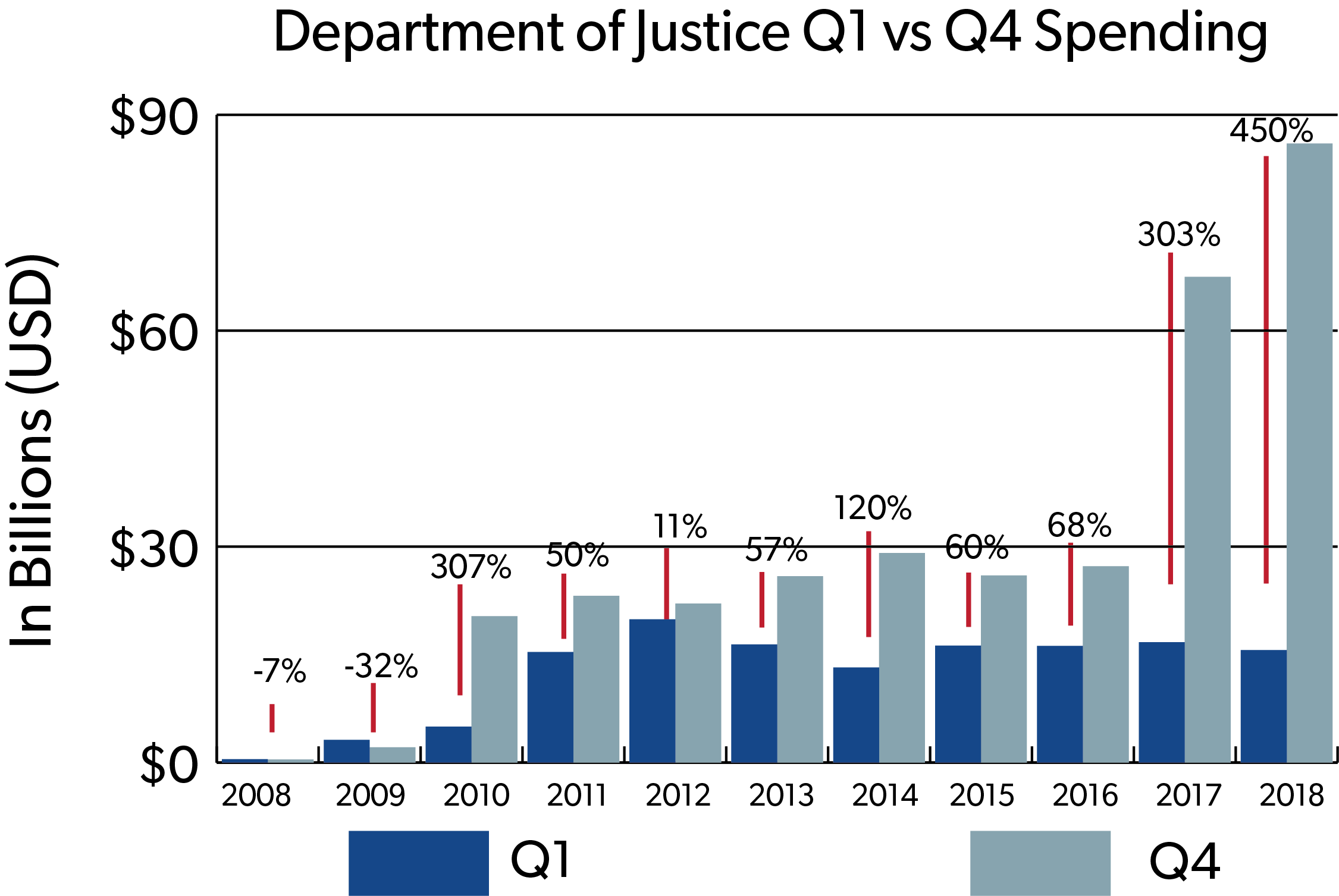 The Department of Justice (DoJ) saw an average spending increase of 51.4 percent in Q4 over Q1-3 rates. The single largest jump for the agency came recently in fiscal year 2018, with a 534 percent jump between Q2 and Q4. While the jumps between Q1 and Q4 at the DoJ are certainly steep, the Department of State (DoS) boasts a single jump 3 times higher than the DoJ in fiscal year 2018. 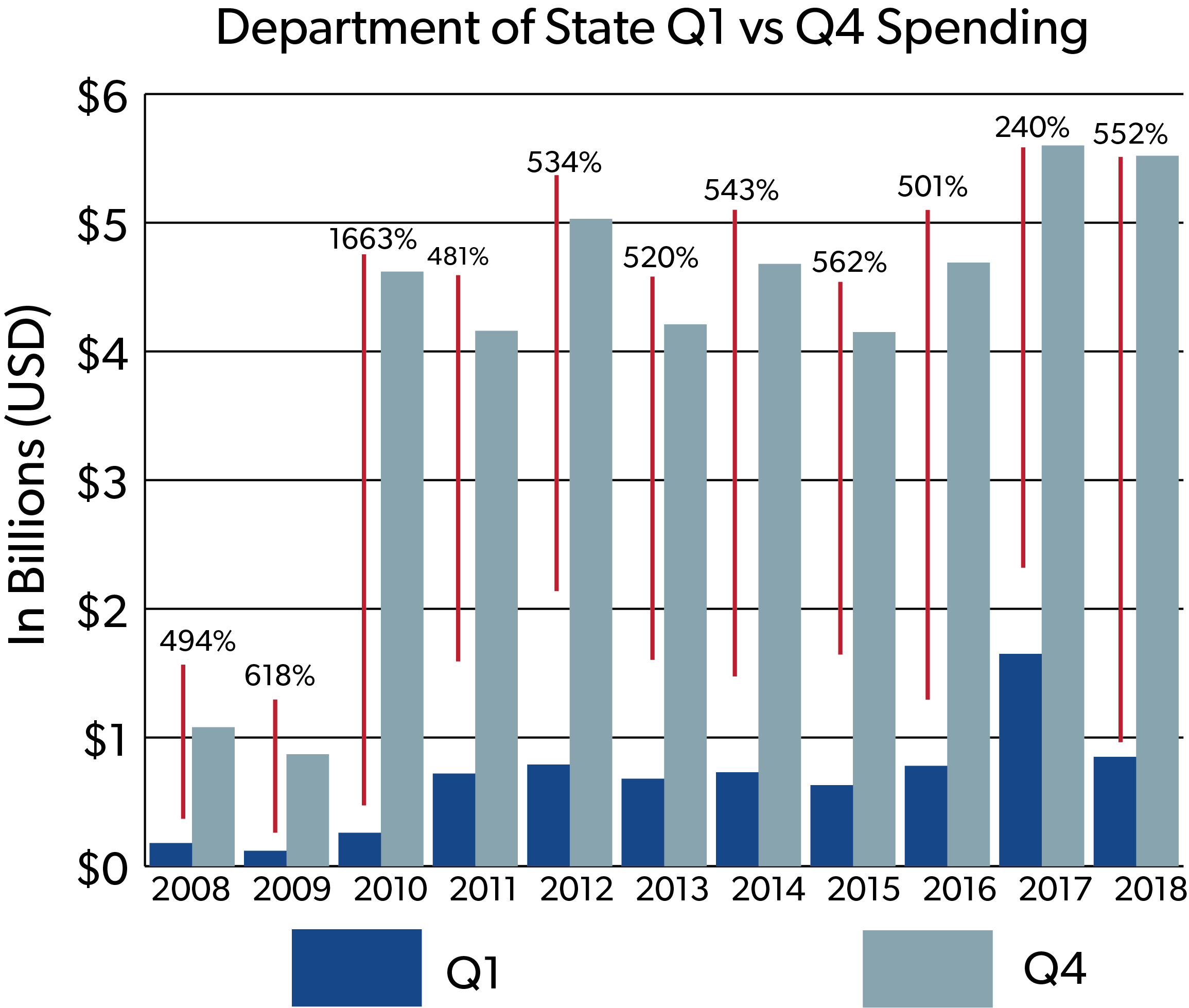 The DoS saw an average increase of 123 percent in Q4 over Q1-3 rates. The single largest jump in DoS spending was in fiscal year 2010 from Q1 to Q4 of 1663 percent. The massive jump from Q1 to Q4 may well reflect the State Department’s ambition in 2010 to expand its staff by 25 percent, though the staffing increase still fails to account for the full 1663 percent gap.

While the Department of Defense (DoD) may not have the most dramatic increases in terms of percentage jump, the agency spends a massive amount of taxpayer dollars in total. 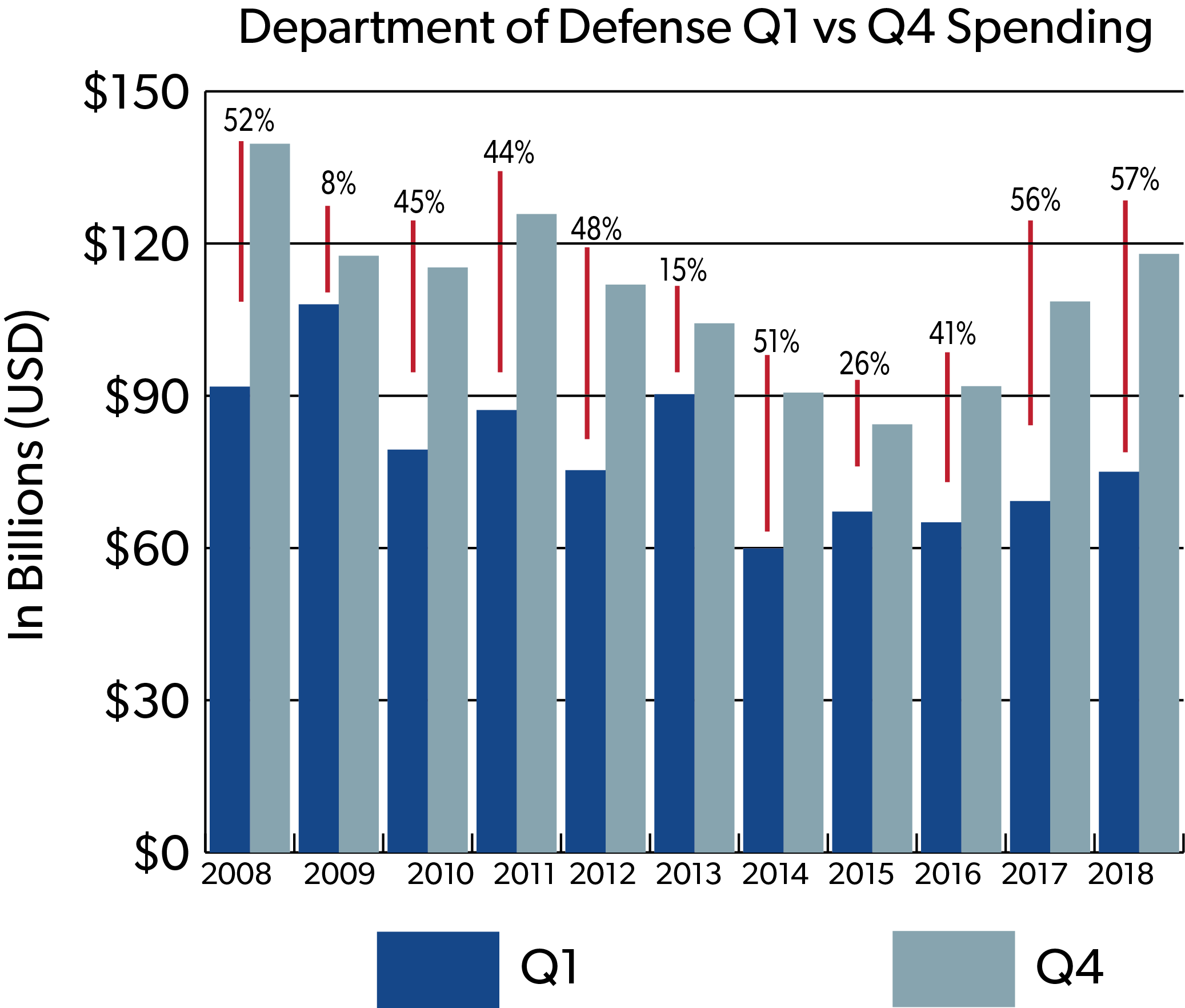 This chart shows smaller percentage increases, but they translate to many millions more dollars than other agencies due to the Department’s sheer size. The average increase from Q1 to Q4 for the DoD was 27.2 percent, reaching a peak difference of 114.3 percent from Q2 to Q4 in fiscal year 2013.

Thanks to the success over recent years improving transparency of government data, it is possible to browse or search the Federal Business Opportunities website to see how agencies are spending American tax dollars. For example, in 2016, NTUF compiled a list of 17 questionable, wasteful, and excessive purchases made during the final month of the fiscal year, including a $162,000 bronze sculpture for an Alaskan town of 1,000 people and $14,306 worth of T-Shirt cannons.

Another watchdog organization, Open the Books, conducted a comprehensive review of agencies’ purchases in the final month of fiscal year 2018 and concluded: “For federal agencies, Christmas comes in September, not December.” Open the Books found that federal government spent $97 billion on 509,828 contracts during the month. While most September expenditures are focused around defense procurement, the group highlighted a handful of notable “Miscellaneous Expenses” from 2018 such as:

NTUF identified a number of seemingly wasteful purchases in the very last week of fiscal year 2018, including:

NTUF has also been monitoring purchases being approved during Q4 of fiscal year 2019, which began on 1 July, 2019. Some of the contracts awarded in the last two months include:

Reforming the Use it or Lose it Spending Surges

To address the chronic Q4 spending surges, Senator Joni Ernst (R-IA) introduced S. 1238, the End-of-Year Fiscal Responsibility Act earlier this year. This legislation seeks to curtail the practice by removing the incentives that contribute to the problem. The Act would limit an agency’s discretionary spending in the last two months of the fiscal year to the average it spent per month during the preceding 10 months. Outlays for direct spending programs like Social Security and Medicare, and national security-related expenditures would be exempt and unaffected.

By forcing agencies to normalize their spending rates, this bill could potentially provide a partial solution to the current flood of Q4 spending. However, any legislative fixes would need to address potential agency concerns about unduly restricting Q4 spending in the event of an emergency or pursuant to an otherwise-lawful directive. This bill has yet to be scored by CBO for estimated savings.

Congress must begin to combat this costly habit of rushed agency spending. Taxpayers deserve better than a mad year-end dash to spend resources as fast as possible simply in the name of bureaucratic advancement. With ballooning deficits and serious entitlement spending challenges on the horizon, the time to address this problem is now.