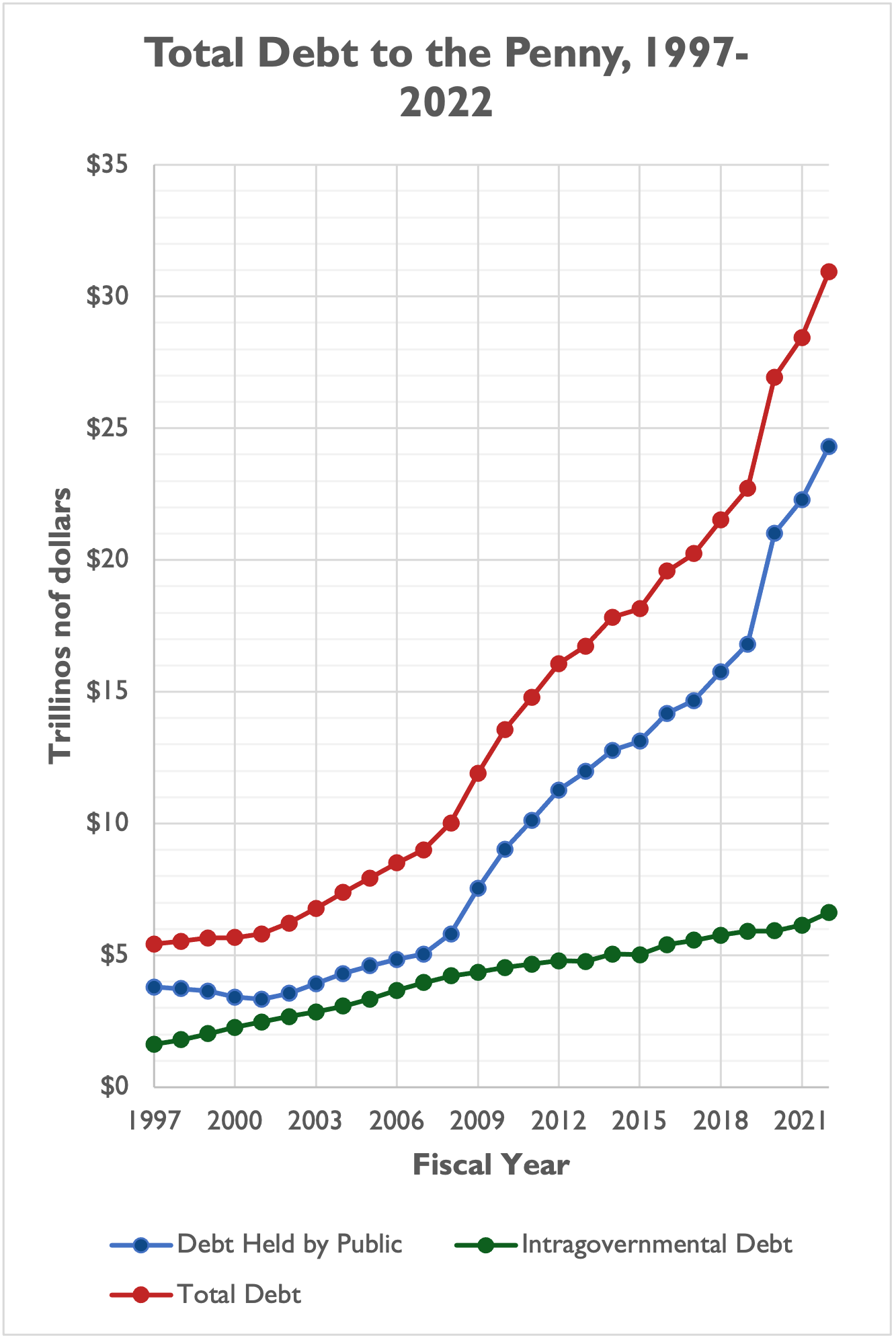 On October 1, 2007, George W. Bush was president of the United States, Democrats controlled Congress, and the global financial crisis and recession was getting underway. Total federal debt (comprising debt held by the public and intragovernmental holdings, the latter generally meaning debt the government owes itself) stood at $9 trillion. Over the course of that 15 years (2008-2022) and several national crises – the Great Recession and the COVID-19 pandemic chief among them – Congresses and presidents controlled by both parties racked up debt on the taxpayers’ credit card, adding at least $325 billion to debt each and every year, at least $670 billion in 14 out of 15 years, at least $1 trillion in 12 out of 15 years, more than $2.5 trillion in two years, and an astounding $4.2 trillion in FY 2020 alone. 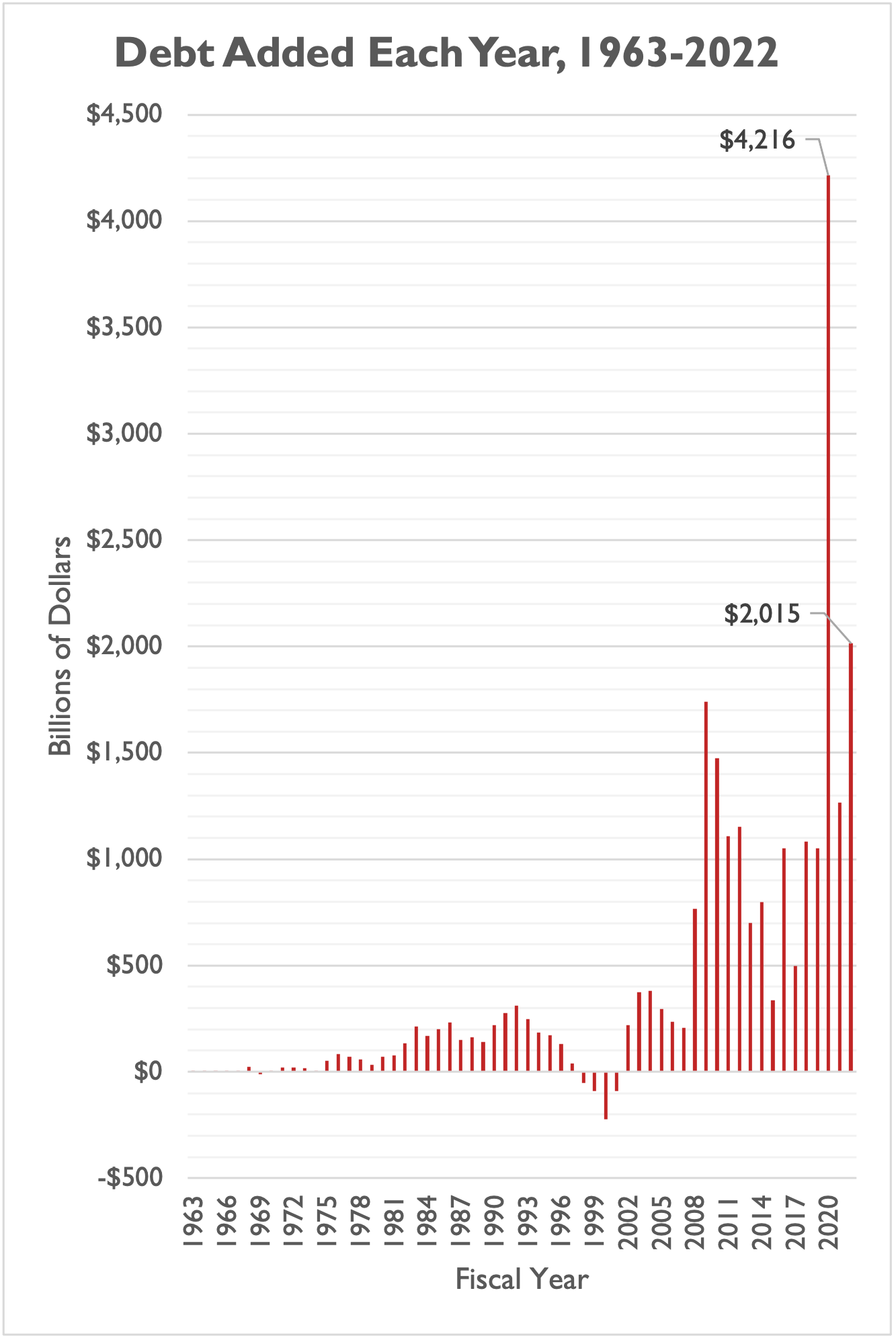 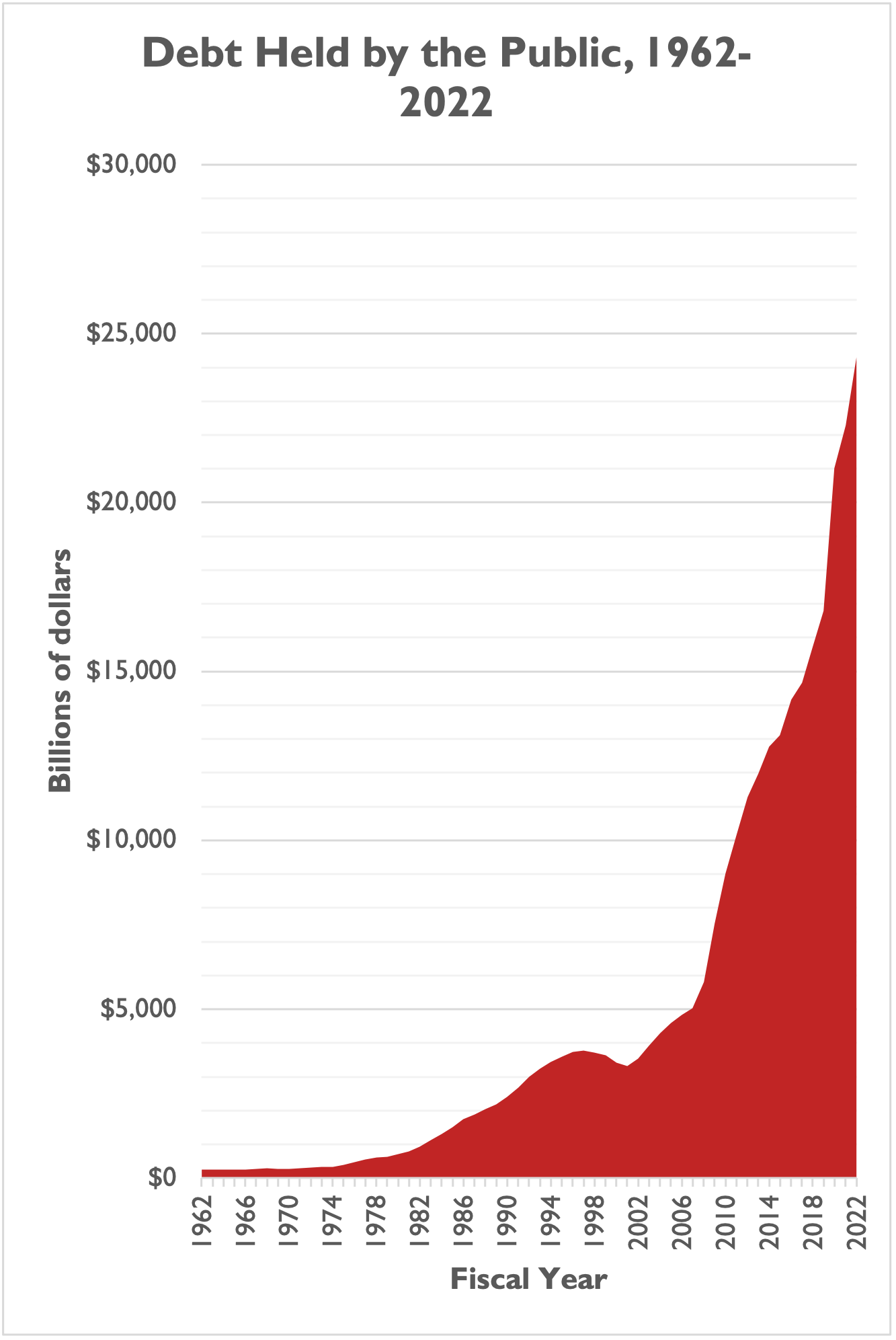 And here’s how net debt accumulation has broken down by decade:

Of course, Congress likely would have added to the nation’s debt load absent these crises. Federal policymakers have become all too used to spending more tax dollars than the government takes in, even in times of peace and prosperity. 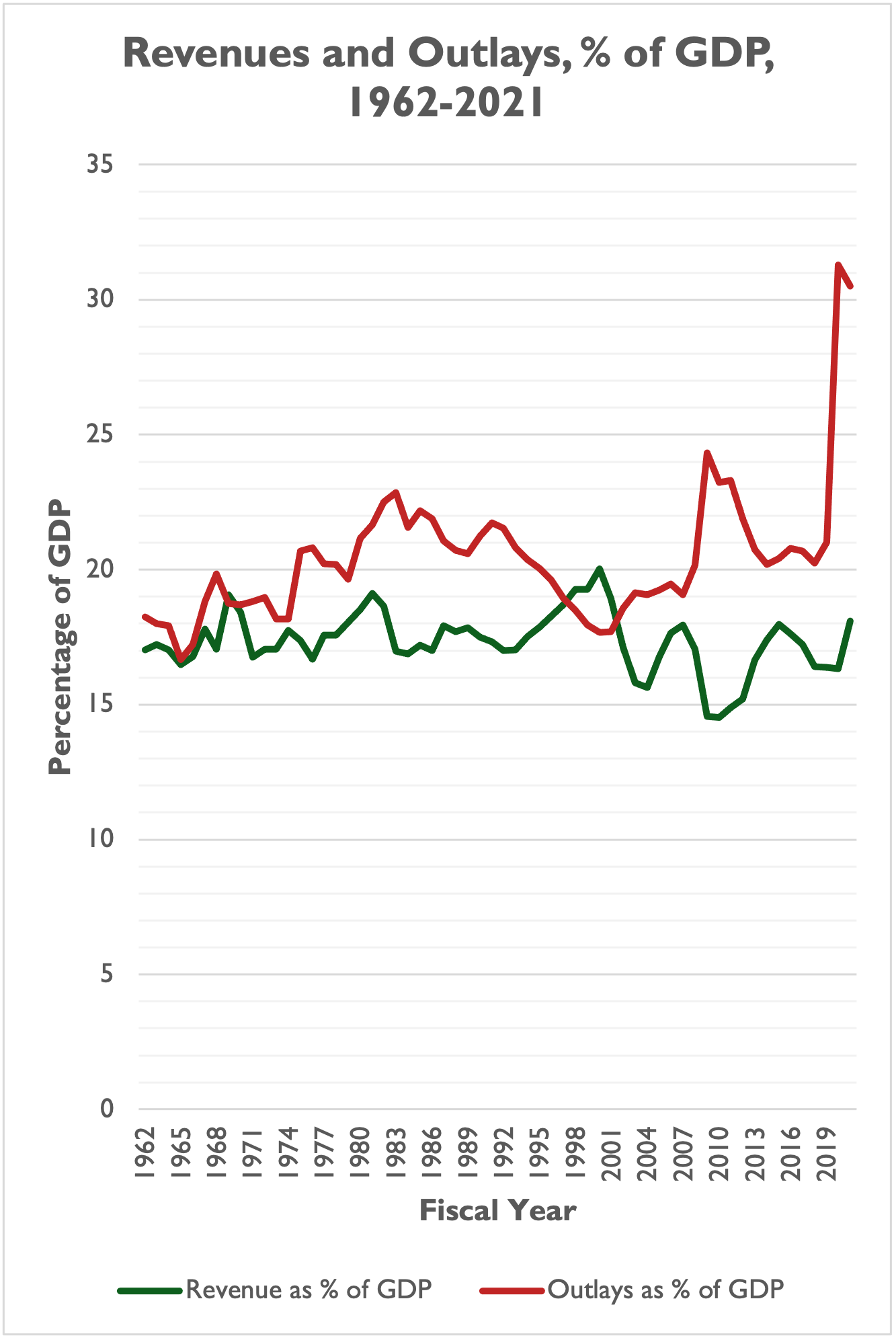 A skeptical observer may ask: why does all of this matter? There has not yet been a U.S. debt crisis, as some feared would be the case years ago, despite the federal government’s rapid accumulation of debt held by the public in the past 15 years.

Policymakers should not rest easy, though. CBO has expertly explained the numerous consequences of unmanageable debt loads:

Rising interest rates in particular could have a pernicious impact on deficits and debt absent any fiscal policy decisions made by Congress or the president. 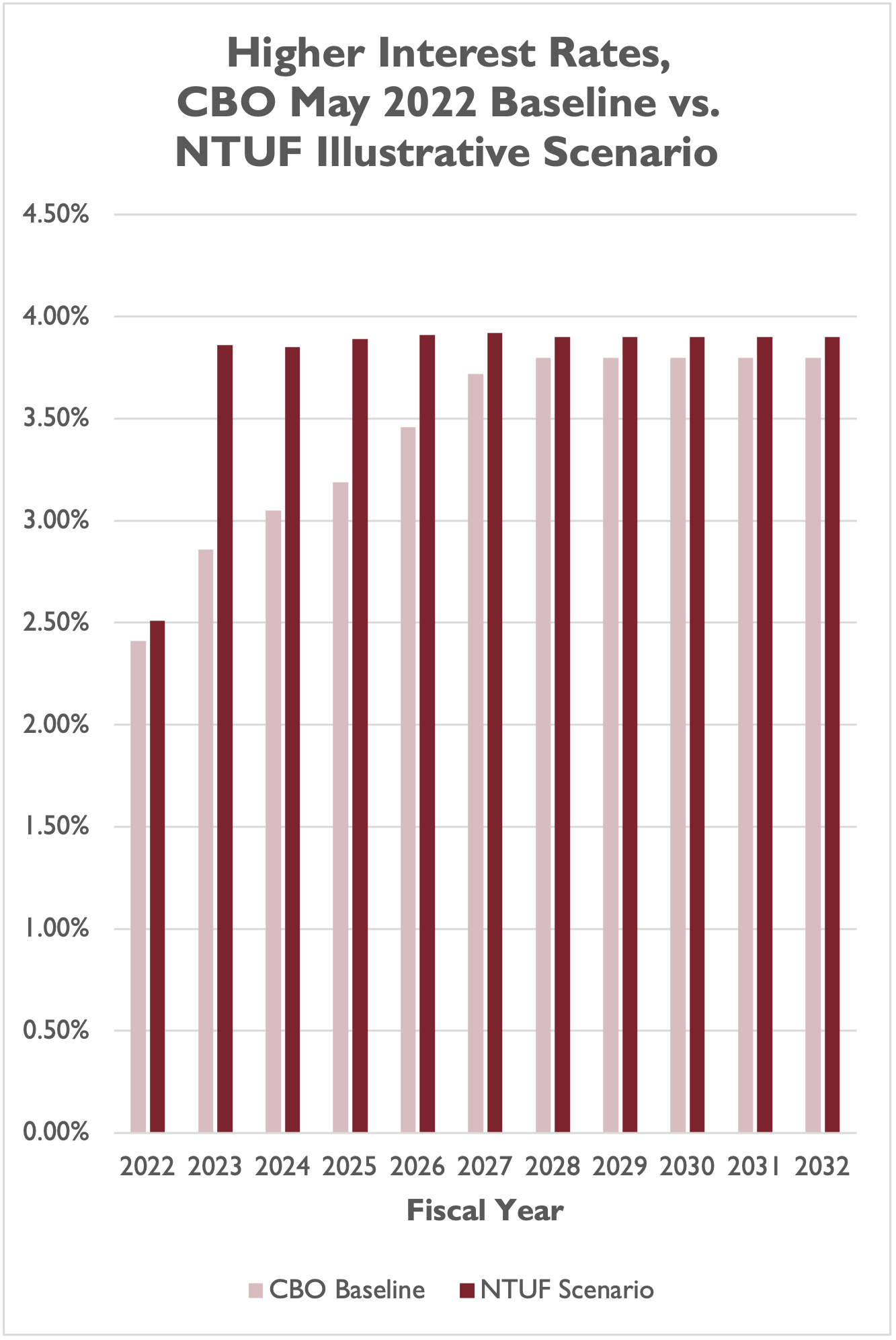 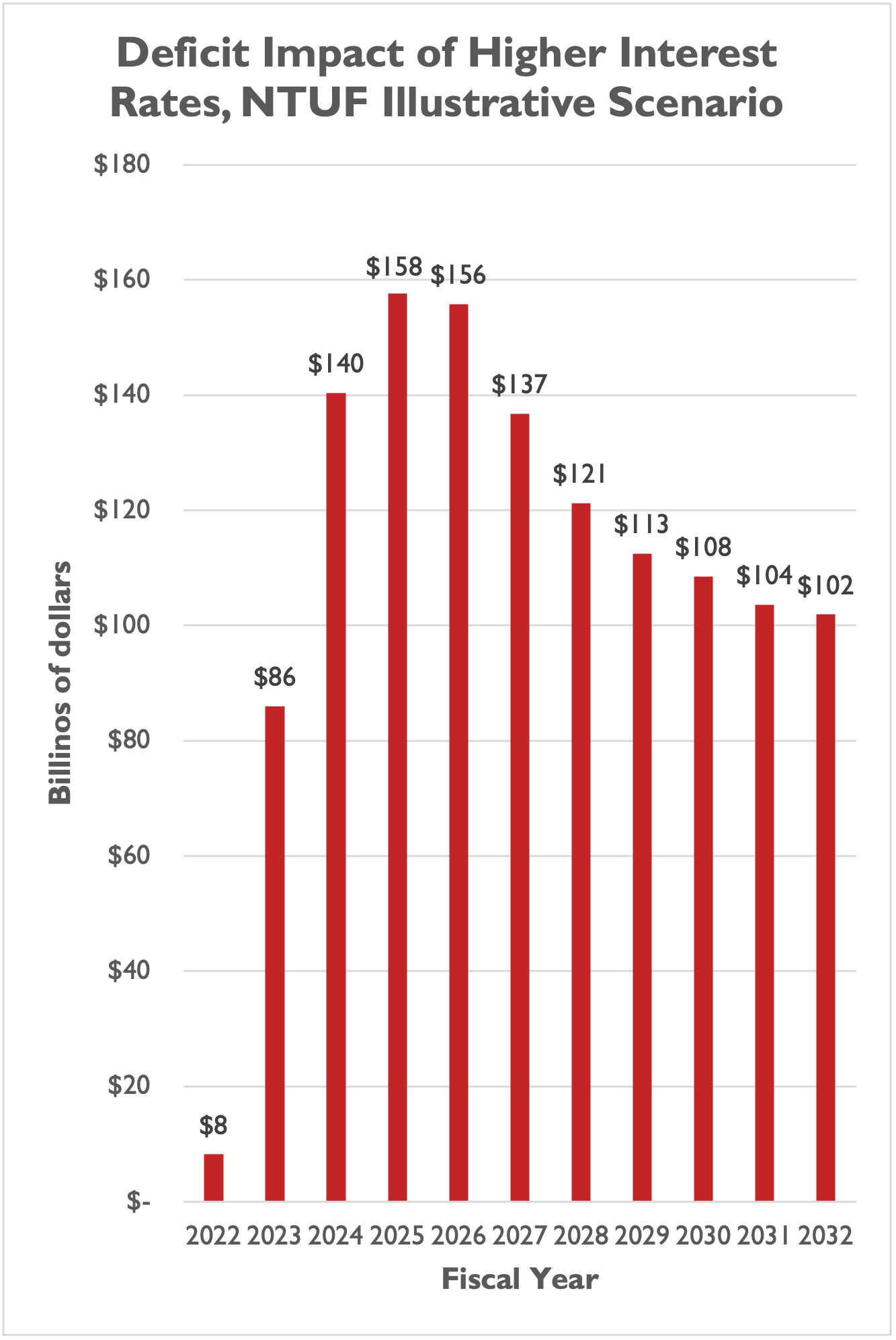 CBO has projected that U.S. debt will continue to skyrocket. Federal government spending as a percentage of GDP will rise above 25 percent in the 2030s and above 30 percent in the 2050s, driven by ever-increasing mandatory spending costs in Social Security and Medicare, while revenue hovers between 18 percent and 20 percent of GDP in each of the next 30 years: 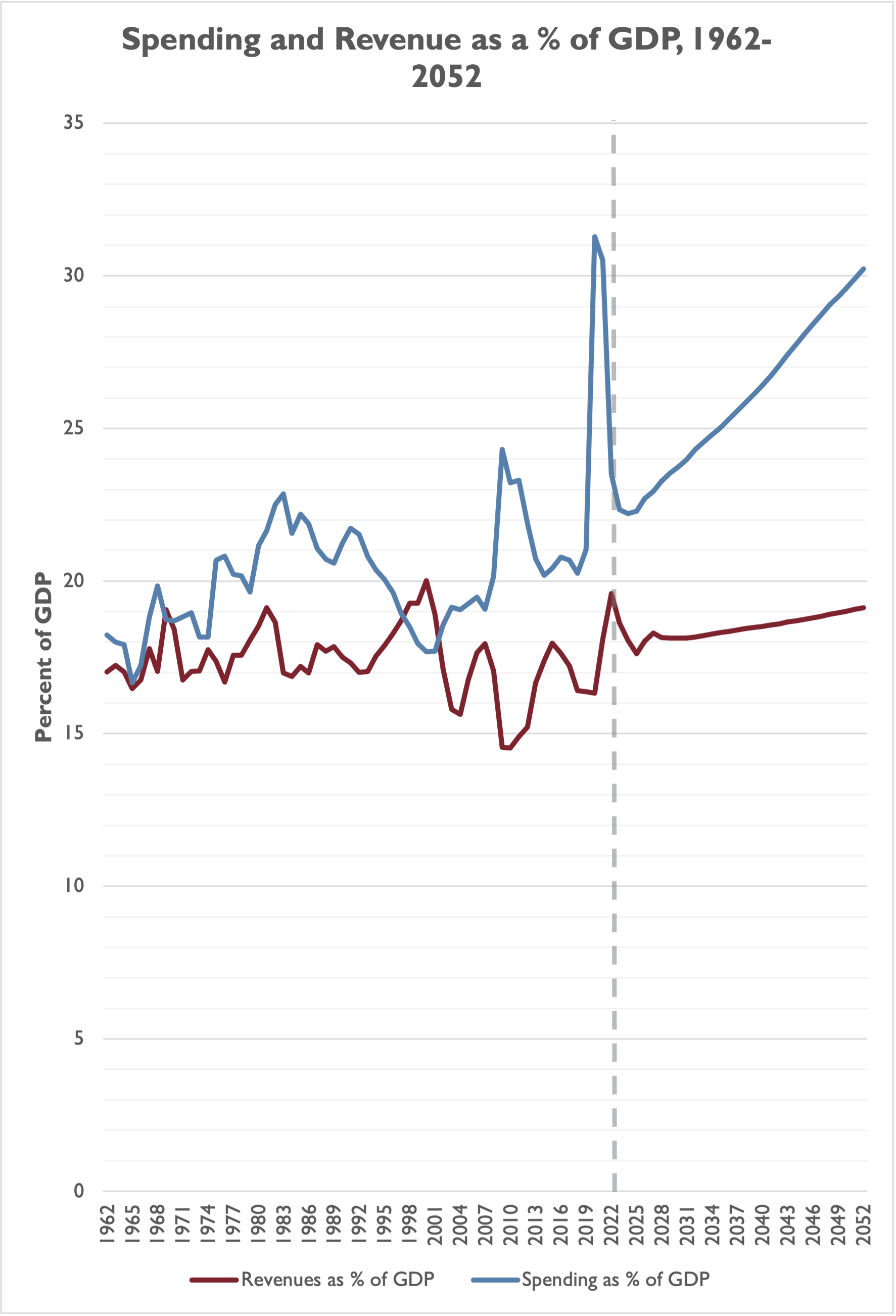 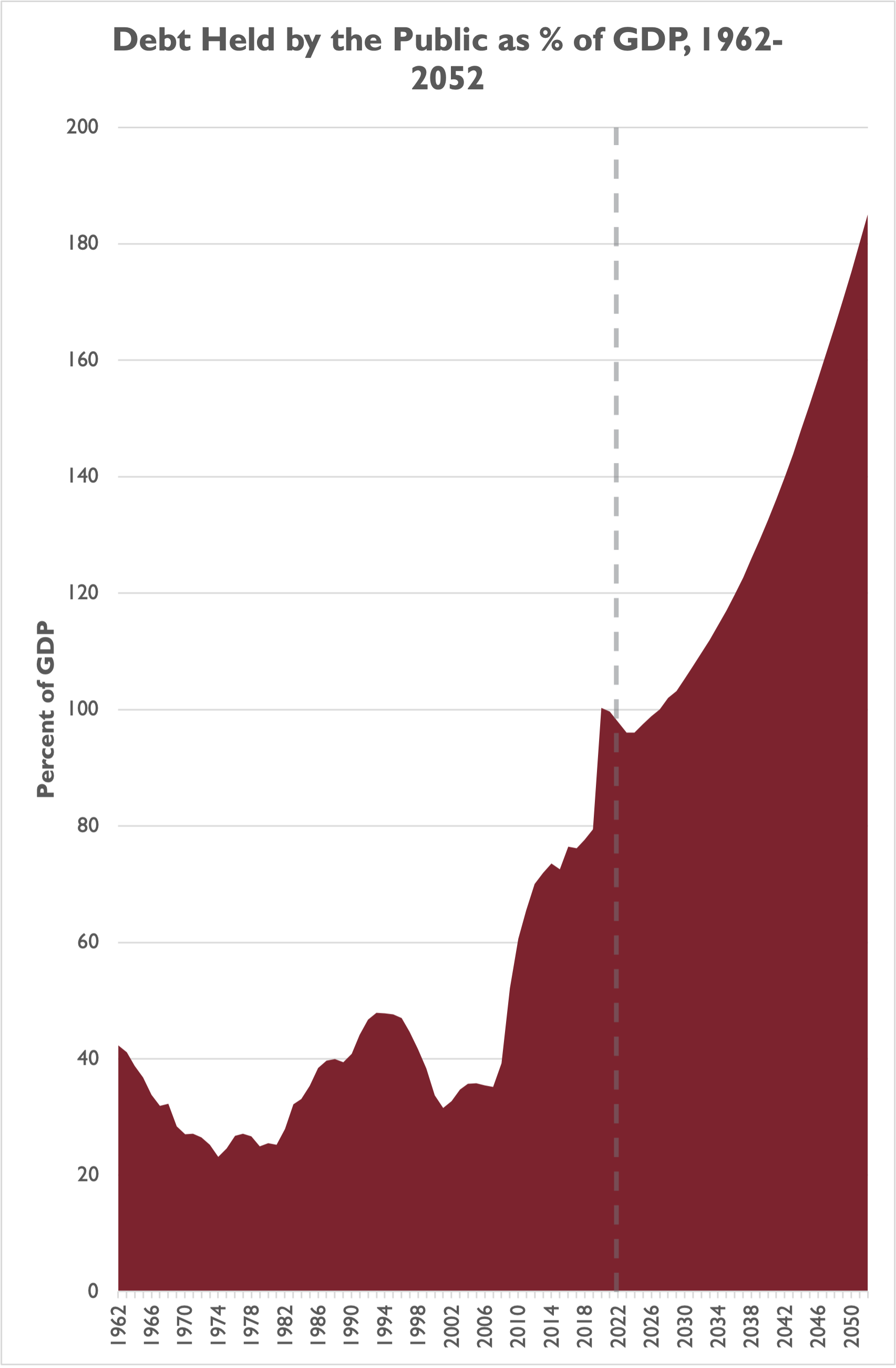 These estimates from CBO may actually be conservative, given CBO does not account for future economic and fiscal shocks (such as recessions, natural disasters, wars, and pandemics) and CBO does not assume policymakers will add to the taxpayers’ credit card above and beyond how they are projected to do so under current law. (Future policymakers are almost certainly likely to increase spending beyond CBO’s baseline, and deficit-financed tax cuts or extensions of temporary tax cuts may reduce revenue beyond what CBO projects.)

Reducing debt back to 2007 levels (35 percent of GDP) or achieving balanced budgets are no longer realistic targets for Congress in the next decade or so. Even reducing debt levels modestly would be a herculean task for both parties in Congress – holding debt to roughly 95 percent of GDP 10 years from now (FY 2032) would require policymakers to achieve $5.4 trillion in debt reduction relative to current CBO projections.

But if lawmakers can’t even take small, modest steps toward more sustainable debt levels, they greatly increase the chance the U.S. experiences a federal debt crisis at some point in the coming decades. We have hit $31 trillion in gross debt faster than probably any policymaker could imagine in 2007. It’s time to tap the brakes, before $31 trillion seems as small in the future as $9 trillion seems now.