The Republican Study Committee (RSC) recently released its budget vision, the Blueprint to Save America, which includes a package of reforms to the budget process and lays out a plan to balance the budget. Included among the recommendations in the 122-page document are options to improve the operation of the Congressional Budget Office (CBO), an agency that plays a pivotal role in the policy making process through its fiscal analysis and cost estimates of proposals. The RSC would implement many changes that NTUF has recommended to make sure that lawmakers and the public have access to estimates that are as accurate as possible.

CBO exists at the heart of the policymaking process in the nation’s capital. As Congress’s budget forecasting and scorekeeping agency, it completes hundreds of formal cost estimates every year, and on top of that it responds to numerous requests from lawmakers for the potential fiscal impact of proposals that are still in the drafting stage. CBO’s impact extends beyond the halls of Congress as well — reporters rely heavily on CBO’s budget impact projections when determining how to frame legislation, as seen in coverage of a recently passed law as “paid for” despite the blatant use of a budget gimmick.

In the course of producing its cost estimates, CBO’s analysts occasionally make assumptions some experts disagree with. However, it is more often the case that concerns about its budget estimates stem from the rules it operates under as designed by Congress. When drafting legislation, all too often members will take advantage of these rules and craft their legislation to obtain favorable estimates.

The RSC’s blueprint includes several reforms that would improve CBO’s cost estimates by either having CBO include additional information in its analyses or by revising the baseline to provide for more realistic budget data.

Other CBO reforms in the RSC plan would help strengthen budget discipline and boost transparency.

Under CBO’s baseline projection, the federal government is on track to collect $56.5 trillion in taxes over the next decade but spend $72.2 trillion, cumulatively growing the national debt by $15.7 trillion.

The RSC budget blueprint would seek to restore fiscal discipline, leading to a balanced budget. This would be accomplished by restraining the growth in outlays to 2.4 percent annually over the decade versus 4.8 percent under CBO’s current-law baseline. 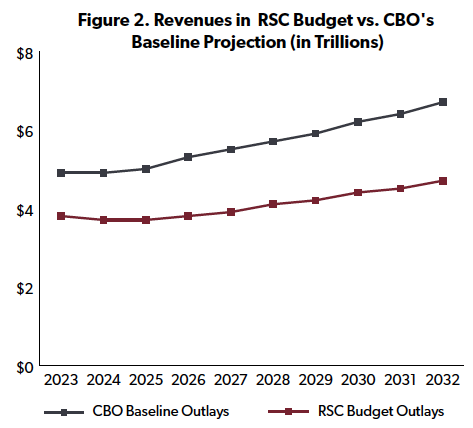 The RSC would also have the government collect less in taxes and allow for the continuation of the individual income tax reforms in the Tax Cuts and Jobs Act of 2017 (TCJA), which are set to expire under current law. It would also include other pro-growth tax policies such as allowing businesses to deduct the full value of investments from their tax liability the year of the investment. As NTUF pointed out in 2017, full expensing reduces “the staggering complexity of tax treatment for business assets and encourage[s] increased investment that can fuel economic growth.” 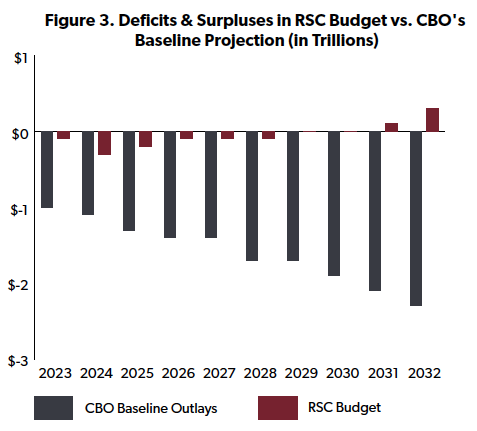 Under the CBO baseline, annual deficits will significantly grow over the decade, adding trillions to the national debt. Under RSC’s budget, the combination of slower spending growth and pro-growth tax policies would set an alternative course for the budget, shrinking annual deficits and generating surpluses starting in 2029.

It is simply untenable for the federal government to continue to spend trillions more each year than it collects in taxes. While some argue that the solution is more tax increases, federal tax revenues have increased compared to pre-TCJA projections. Yet spending has increased even faster, and spending growth is expected to accelerate rapidly by the end of the decade.

Even if overspending was not so clearly the culprit, tax hikes would have a negative impact on the economy, pulling investment capital out of the productive private sector and impeding job creation. This is especially true at a time when so many families are facing increased costs for nearly everything because of inflation — a problem that only continues to worsen thanks to far too much government spending.

The RSC lays out a plan that would balance the budget by slowing the growth in spending while also allowing taxpayers to keep more of what they earn. As an added bonus, its CBO reforms would also help ensure that lawmakers and taxpayers alike have access to more realistic budget data.