New tax migration data from the Internal Revenue Service (IRS) shows that thousands of taxpayers have fled high-tax states for states with more hospitable rates. While taxes are not the only factor in location decisions, the IRS data shows a strong relationship between tax burdens and migration patterns.

The ten states with the highest state and local effective tax rates saw over 232,000 taxpayers move to other states in 2019, taking with them a net Adjusted Gross Income (AGI) of $31.2 billion. The top ten destination states of taxpayer migration had effective tax rates lower than the national average, four of which have no state income tax at all, including the two states topping the list, Florida and Texas. All told, these ten states saw an influx of 283,000 taxpayers with a total AGI of 37.8 billion.

The data also calls into question the state and local tax deduction expansion contemplated in the “Build Back Better” (BBB) reconciliation package. The counties that benefited most from the state and local tax deduction prior to enactment of the Tax Cuts and Jobs Act (which capped it at $10,000) saw a net loss of nearly 36,000 taxpayers and $10.4 billion in wealth. The BBB would increase the cap, thereby allowing these localities to maintain their high taxes and effectively shifting the cost onto federal taxes.

High-tax states and counties risk driving away taxpayers and considerable wealth. Given the technological developments that enable a more mobile workforce and greater employment opportunities, this trend is likely to continue going forward.

The IRS data used below shows the net change in residence from one state to another (excluding international migration) reported by filers from 2018 to 2019. This information was matched up with each state’s (and Washington, D.C.’s) top income tax rate and also the combined state and local effective tax rate for 2019 as compiled by the Tax Foundation.

Table 2 breaks out the top ten states by net outflow of taxpayers. 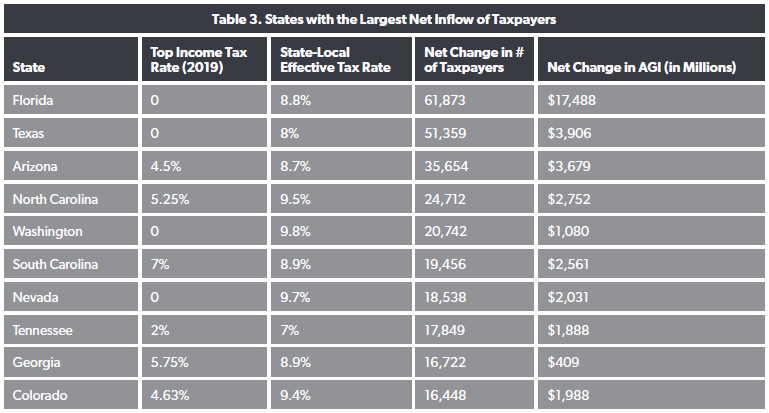 Table 3 shows the states with the largest influx of taxpayers from other states. The top two destination states (Florida and Texas) have no income tax. Neither do Washington and Nevada. Also included was Tennessee which has no broad-based tax for wage income but at the time was in the process of phasing out its tax on income from certain investments, reducing it 1 percent per year until its elimination this year. South Carolina had a top income tax rate higher than the national average, but a combined state-local effective tax rate of just 8.9 percent, which places it 40th in the U.S.

The State and Local Tax Deduction

The IRS data also captures migration in and out of counties across the country. Table 4 shows the top ten counties that benefited from the state and local tax (SALT) deduction, as compiled by the Tax Foundation in 2018. Through this tax provision, filers can deduct certain taxes at the state and local level from their federal income tax bill. The Tax Cuts and Jobs Act of 2017 capped the amount that could be deducted at $10,000, a tradeoff for lowering federal tax rates across-the-board and nearly doubling the standard deduction.

One of the concerns about the deduction is that the benefits primarily flow to wealthy individuals. For example, in 2015, over 84 percent of the benefit went towards those with incomes above $100,000. The deduction also primarily aids residents in high tax areas, which are able to maintain higher state and local tax rates due to the federal deduction’s offsetting impact. 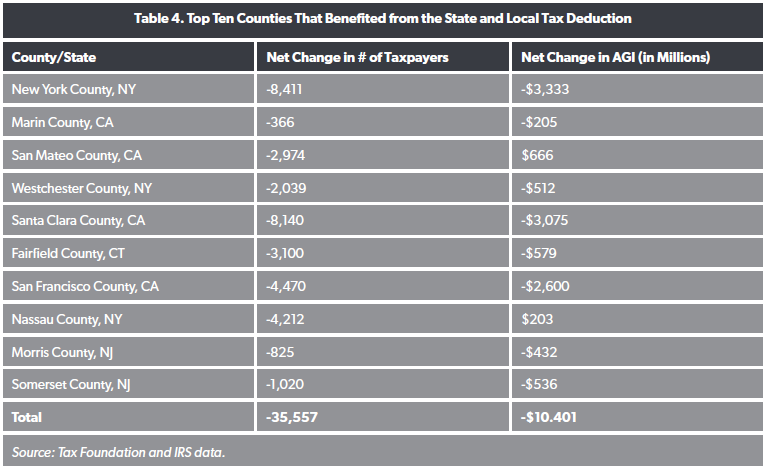 Through the reconciliation package, Democrats hope to increase the SALT deduction to $80,000 through 2030, after which it would reset to $10,000. As before, the benefits would mostly flow to the well-to-do in high tax jurisdictions, easing pressure in those areas to implement needed reform in their taxing and spending policies. As remote work options continue to proliferate and housing costs continue to shut many out of major metropolitan areas, the trend of outflow from high-tax areas is likely to continue.

Many taxpayers are effectively voting with their feet and resettling from high-tax states to states with lower taxes. This contributes to shrinking tax bases in high-tax jurisdictions and significant shifts in political power that are reshaping Congress and the nation. States and localities with high tax burdens would be wise to reform their codes to attract and retain businesses and individuals, instead of pushing them out.