When New York City was struck by the coronavirus pandemic, with hospitals struggling to handle the influx of patients, tens of thousands of Americans selflessly volunteered to risk their own health in New York’s struggling hospitals in order to travel to the nation’s COVID-hotspot and help their fellow Americans in need. Little did they know that New York would view them as a means of ameliorating not only its health crisis, but its budget crisis also.

Out-of-state medical professionals who willingly travelled into the disease’s American epicenter soon found out that their extended stays in New York City subjected them to New York income tax — an obligation for which New York had no intention of letting them off the hook. Citing the state’s $13 billion deficit, Governor Andrew Cuomo responded to questions about taxing volunteers who risked life and limb to help the state by saying that “we're not in a position to provide any subsidies right now.” Setting aside that tax relief is not the same thing as a subsidy, this illustrates New York’s callous disregard for the financial and interstate commerce implications of aggressively imposing its taxes on non-residents.

Cuomo was referring to a state law that targets out-of-state workers with New York State income tax obligations for work they performed in the Empire State. This applies both to workers traveling to the state for emergency response and also to those commuting into New York from nearby states.

And while the callous rigidity of New York State tax law may have come to a surprise to volunteer healthcare workers or commuters, the state’s reputation as one of the most aggressive tax revenue pursuers is well-earned. New York pioneered the idea of so-called “convenience of the employer” rules, legal monstrosities by which the state asserts a claim to the income of employees working remotely out of state for an in-state business so long as the work could conceivably have been performed in-state. In other words, if your work from home is not a matter of absolute necessity, you’re on the hook for New York taxes anyway.

In a previous NTUF paper, we took a bird’s-eye view of the ways in which COVID-related remote work could affect taxpayers. In this analysis, we will focus specifically on one state, New York, that has managed to stand out from the crowd due to its commitment to aggressively enforcing its tax rules on non-residents, including its neighboring states and volunteers from across the country.

For years, Congressional efforts to fix this problem have been stymied in no small part by New York lawmakers, including Senate Minority Leader Chuck Schumer. Legislation called the “Mobile Workforce Income Tax Simplification Act” has passed the House of Representatives not just by a strong bipartisan majority but in fact by voice vote in the 112th, 114th, and 115th Congresses. This bill would establish a uniform standard prohibiting states from imposing income tax on non-residents until they surpassed 30 days of work in the state. In each case, despite overwhelming support from the House, the Senate failed to advance the bill or attach it to another vehicle in part due to parochial concerns on the part of the New York delegation.

This analysis will look at some selected examples that illustrate how New York’s aggressive tax policies towards out-of-state remote and volunteer workers can impact the tax bills of Americans subjected to them.

Tennessee isn’t known as the “Volunteer State” for nothing, and many Tennesseeans were among those out-of-state healthcare professionals who travelled to New York City to aid with its healthcare crisis. Yet because Tennessee is a state without an income tax, this could potentially subject such volunteers to an even bigger shock when New York revenue officials come calling.

While there is some logic to assessing New York tax to income sourced to New York, that logic breaks down when considering the circumstances of an emergency response during a pandemic. Most volunteers traveling to the state were doing so for humanitarian reasons, not for the purpose of expanding or seeking out new business. In fact, it’s likely that few considered the tax implications at all, since such matters (rightly) take a back seat to the medical necessity of a massive COVID outbreak. In a presidentially-declared emergency such as this, volunteers should have the confidence to provide their help without fear of big tax bills. Aggressively imposing tax on work they perform in the state could act as a severe disincentive for future volunteer travel, not to mention simply offending the conscience.

Tennessee is also notable because its representatives in Congress have been active in attempting to address New York’s tax treatment of its volunteer workers. Rep. Scott DesJarlais (R-TN) has introduced H.R. 6970, the Prevent Restrictions on Volunteers’ Incomes During Emergencies (PROVIDE) Act, which would make states that tax volunteer workers’ incomes during the period of national emergency ineligible for federal disaster relief funds.

Example 2 shows a hypothetical example of an emergency medicine physician who travelled from then-lightly-hit Mississippi to New York City during the city’s crisis period. Making the mean Mississippi salary of $171,050 for emergency medicine physicians, about $8,000 less than the mean salary for the same position in New York, this Mississippian would still be subjected to New York income taxes for the period she spent in New York.

Because of this, just a three-month period of Good Samaritanism would earn this volunteer emergency medicine physician an income tax bill that is $1,223 higher due to New York’s targeting. It’s notable that while this taxpayer would feel that loss, the $2,231 she paid to New York state would be next to meaningless against a $13 billion budget hole. If all of the estimated 25,000 out-of-state medical volunteers who came to New York during its healthcare crisis paid this much in taxes (an unlikely prospect), it would still net New York just a measly $43.7 million, closing just 0.43 percent of the state’s deficit, while doing untold harm to prospects for future volunteerism.

The implicit tradeoff when living in a higher-tax state is that the taxpayer paying into it receives a more expansive government in return, which theoretically offers greater services. Part of the beauty of the American federal system is that Americans can choose, to a degree, whether they wish to live in a state with lower taxes and a smaller government, or a state with higher taxes and a larger government.

Yet this hypothetical emergency medicine physician would receive very few of the supposed benefits of a high-tax state during her time in New York. The physician would benefit not at all from New York’s spending on public schools or higher education. Should she lose her job, she would receive unemployment benefits from Mississippi, not New York — meaning that she could expect to receive a weekly benefit of $235 a week, not the New York maximum of $504.

Example 3 is distinct from the first two examples in that it concerns an employee who worked in New York state prior to the onset of the pandemic. Unlike the first two examples, where non-residents traveled into New York to perform work, the employee described in Example 3 went the other direction, no longer traveling into the state at all and instead performing work from home in Connecticut.

Yet the employee in this example works for an essential business, which means that his office was allowed to remain open. In the interest of safety, his business allowed him to shift to remote work at his Connecticut home at the end of March, following public health guidelines recommending that businesses limit in-person work only to where it is absolutely necessary.

Yet because of the convenience of the employer rule, New York could claim every dime of income the HR assistant earned through the year, whether performed in New York or Connecticut. Ironically, it would be the HR assistant’s employer’s status as an essential business that would enable New York to do this.

Because the HR assistant’s office was allowed to remain open, New York could assert that it was a matter of “convenience” and not necessity that the manager work from home. New York’s interpretation could be that the HR assistant shifted to remote work at the “convenience” of the employer — even though the business was following recommendations for social distancing in doing so.

As a result of the convenience of the employer rule, the HR assistant could face a tax bill that is over 75 percent higher than it would be without the rule. Connecticut allows a tax credit for income earned in other states, but the taxpayer must be physically working in the other state to qualify for this credit — as a result, the HR assistant might receive a credit only for income earned during the three months prior to switching to Connecticut-based remote work.

The HR assistant would therefore receive a $458 credit for taxes paid to New York, but would be liable for Connecticut income tax for the remaining 9 months of 2020. New York, meanwhile, could claim taxes on the employee’s income for the full year, despite the fact that the employee worked a mere 3 months in the state. This means that what should be an $1,839 state tax bill on $42,620 of income, a tax rate just over 4 percent, jumps to a $3,236 state tax bill, or 7.6 percent. 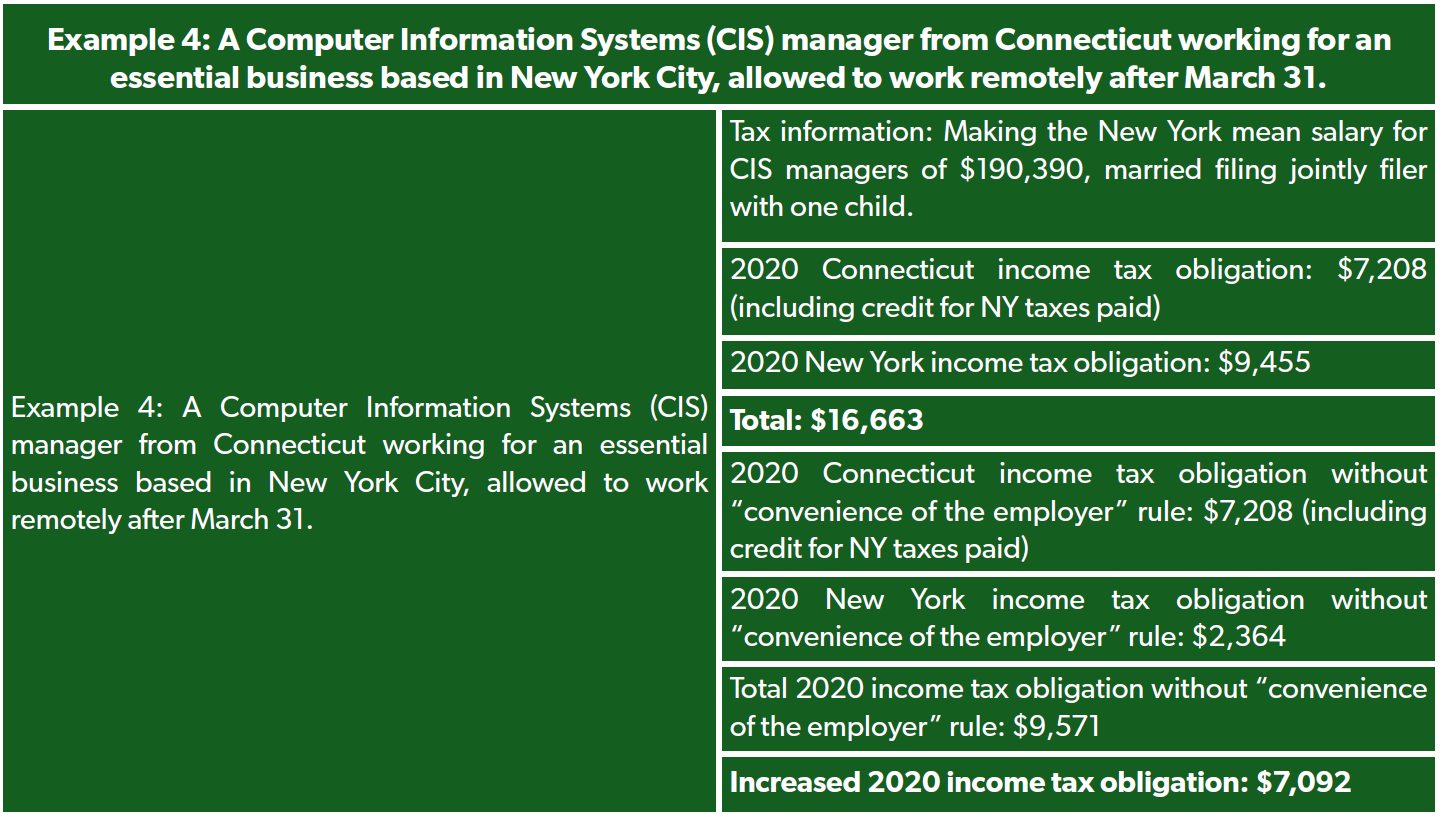 In this example, a computer information systems manager from Connecticut that ordinarily works in a New York City office is allowed to work from home during the worst of the COVID-19 outbreak. Without New York’s convenience of the employer rule, this shift to remote work would mean that the CIS manager in question would source just the three months of in-person work prior to the pandemic’s onset to New York, while the next nine months would shift to being Connecticut-sourced (assuming the period of remote work continued through the end of the year).

If New York took this approach, the CIS manager would pay New York taxes on his full $190,390 salary, for a total tax bill of $9,455. Connecticut, meanwhile, would assess his tax liability at $9,571, only providing a tax credit for income earned while physically working in New York, or $2,364. The moment the employee in question shifted to working remotely in Connecticut, he began to face taxes on two states at once.

As the above examples demonstrate, New York’s aggression in imposing its income tax on non-residents can represent a significant financial burden for commuters and volunteers into the state alike. These tax bills represent not just an opportunistic cash grab by the Empire State, but also engender significant regional and national economic challenges. New York has refused to enter into reciprocity agreements with nearby states, making life much more difficult for commuters that must contend with two state tax regimes. Its aggression also acts as a significant disincentive to travel to the state for emergency response, whether it’s a health crisis like COVID-19 or a natural disaster like 2012’s Hurricane Sandy.

This is why Congressional action to protect taxpayers is so important. By setting the rules of the road, Congress can ensure that the health and economic challenges of COVID-19 are not compounded by state tax problems as well. This effort is too important to allow New York’s narrow self interest to override the clear national interest in shielding taxpayers from new tax obligations arising simply as a result of following public health guidelines.