Under federal law, any tax penalty must be approved by an IRS supervisor before being assessed on a taxpayer. It may sound like an easy step, but inappropriate or excessive penalties are thrown out all the time because the IRS forgot to have the supervisor approve it first.

Buried on page 709 of the House Democratic tax bill released yesterday is a provision repealing this supervisor-approval requirement, retroactive to January 1, 2001. Instead, IRS supervisors will have to write a quarterly letter certifying that their employees are following the rules. 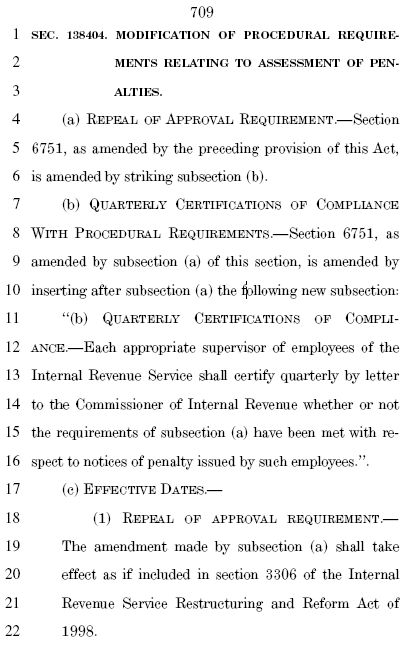 The supervisor approval requirement was added as part of the IRS Restructuring & Reform Act of 1998. NTU worked hard to add the provision after seeing the results of IRS agents going rogue with the enormous power and pressure they can use against taxpayers. The bill was then adopted by overwhelming votes of 402 to 8 in the House and 96 to 2 in the Senate.

Needless to say, this is a very disturbing proposal that will potentially reopen 20 years of cases that taxpayers think they have won. The Joint Committee on Taxation estimates that this change will raise $1.4 billion over ten years in extra penalty collections, showing that IRS agents’ failure to get supervisory approval is hardly a small problem. The revenue estimate ominously has larger collections in the first two years, presumably from retroactive collections where the IRS attempted to impose penalties in violation of this law. (This is all separate from the proposal to increase IRS enforcement funding by $80 billion.)

A long-term goal of NTUF’s Taxpayer Defense Center is to end retroactive tax increases. Most people are shocked to learn that retroactive taxation is not only permissible under current law, but widely practiced. Government likes retroactivity because it extracts revenue from past periods when taxpayers cannot change their behavior to avoid increased tax. The U.S. Supreme Court in 1995, when they last considered the issue, came close to deciding that anything beyond one year of retroactivity violates due process. A newer Court with new justices may decide differently and more favorably to taxpayers. We are engaging in strategic litigation on retroactive changes and will review changes such as this one should it be enacted into law.