House Budget Committee Chairman John Yarmuth (D-KY) has laid out a plan to boost spending levels by $357 billion over the next two years. While claiming to “bring sanity back to the budget process,” Yarmuth’s proposal would eviscerate the last shreds of fiscal discipline established in the Budget Control Act of 2011 (BCA), the most effective spending reform law enacted over the past several decades. The draft includes no substantive offsets to the increase and, ultimately, its cost would pad the spending baseline by an additional $2 trillion over the next decade. 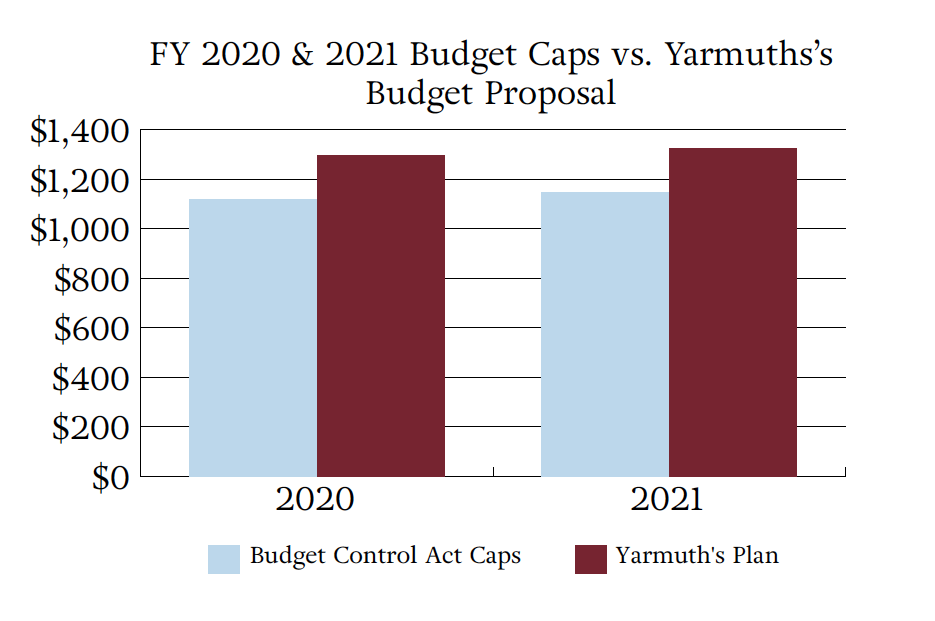 Background: Yarmuth vs. the BCA

Officially known as the “Investing for the People Act of 2019” (IPA), Yarmuth’s proposal would override the discretionary spending caps established in the BCA, allowing for a spending boost of $177 billion in 2020 and $180 billion in 2021. The caps were originally established in a compromise reached by a Republican House majority, a Democratic Senate majority, and a Democratic President. After the stimulus bill boosted deficits to the highest levels seen since World War II and the Affordable Care Act was set to put outlays on an even higher trajectory, the BCA’s caps helped to curb spending. Under the law, a select committee was given the responsibility to craft a ten-year $1.5 trillion deficit reduction plan. After it failed to reach an agreement, the BCA provided for budgetary caps and an automatic process of sequestration as an enforcement mechanism. In 2017, NTUF calculated that the caps had successfully saved over $1.9 trillion, or $7,400 per household in federal spending.

Unfortunately, Congress has chipped away at the restraints multiple times in order to allow for $439 billion in higher spending over the BCA spending caps. The major deals allowed for spending hikes over a two-year period and some offsets. These included plenty of budgetary gimmicks, and while the spending hikes were enacted up front, they provided for “savings” that were spread out over several years – a common practice which helps explain why lawmakers have held spending below tax revenues just 12 times since the conclusion of World War II 74 years ago.

As drafted, the only potential offset contemplated in Yarmuth’s plan is a boost to the tax enforcement division of the Internal Revenue Service by a total of $1.15 billion over the next two years. Yarmuth cites a statistic that every $1 increase in enforcement will yield roughly $3 in revenues. It is important to note here that taxpayers already face an uphill battle in challenging the IRS’s determinations in tax disputes and there are too many previous examples of the IRS’s abuse of power. As NTUF President Pete Sepp has stated, “the threat to taxpayers doesn’t rise and fall in a linear fashion with IRS’s enforcement budget. There is plenty to be worried about, but it’s more about poor procedures and lack of protections for taxpayers than raw enforcement dollars.”

Apart from the possibility of higher tax collections due to increased enforcement, Yarmuth’s plan would pile on more deficit spending, add to debt finance costs, and lock higher spending into the official budgetary baseline. Each year CBO is required to establish a ten-year budgetary baseline based largely on current law practices. In its latest baseline, CBO projected that spending would total $57.8 trillion over ten years, adding $11.6 trillion to the deficit.

NTUF has pointed out many times that this official baseline is artificially low because it is based on “current law” and does not consider congressional actions that routinely boost spending faster than the baseline. To its credit, CBO considered an alternate baseline in which discretionary spending would increase from FY 2019 at the rate of inflation, adding an additional $241 billion over the next two years (lower than Yarmuth’s spending hike) and $1.8 trillion over the next decade plus an additional $290 billion in debt service costs. Factoring in the larger boost over the first two years relative to CBO’s alternative, Yarmuth’s plan would add $2.36 trillion in spending (including debt-service costs) to the ten-year baseline. 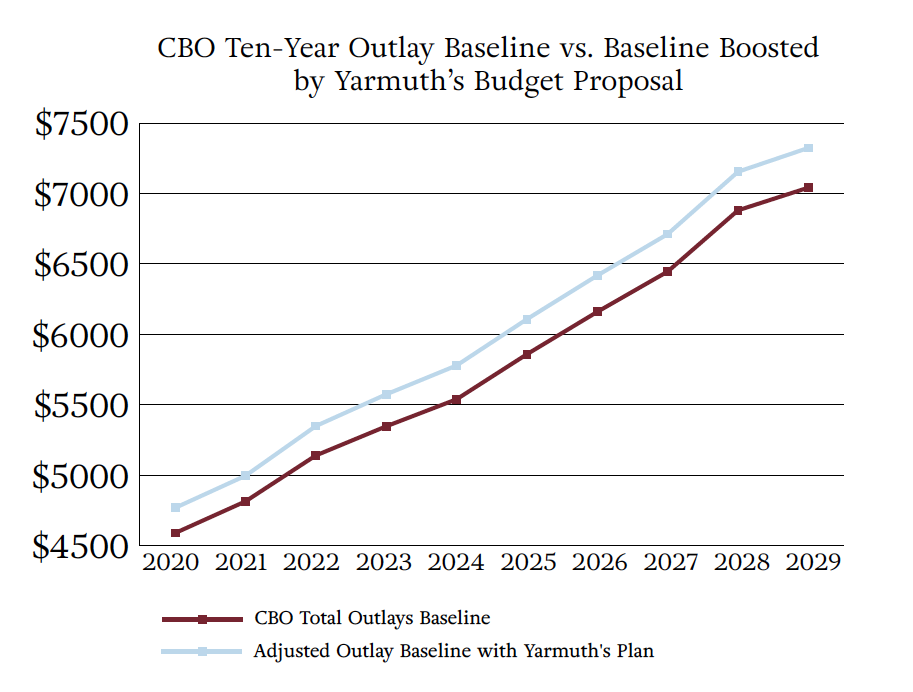 There is, however, one commendable part of the IPA: it rejects the President’s budget plan to sidestep the defense spending caps by boosting outlays through the Overseas Contingency Operations account which is exempt from any caps. Yarmuth also calls on Congress to “significantly reduce and eventually eliminate the OCO budget starting in 2022...”

The BCA caps were set as a fallback plan. However, Congress should have been using the budget resolution process to make the necessary fiscal decisions to prioritize the use of taxpayer dollars to stay under caps. Unfortunately, lawmakers have all too readily agreed to boost deficit spending through deals to raise the caps. Yarmuth’s new plan does so again but without any long-term budget reforms to offset even a portion of the spending hikes.

The House Democrats are not expected to produce a budget resolution this year due to differences within the caucus on budget-busting priorities like Medicare for All versus a relatively more moderate approach to governance and fiscal policy. The IPA would erase the remaining budgetary caps without any offsets, continue the regrettable practice of spending beyond resources, and worsen the debt-load on future generations.

A better path forward would be for lawmakers to adhere to these modest caps and work to find bipartisan common ground solutions to address the main drivers of the projected unsustainable growth in spending: the entitlement programs.