Impact: The Trump administration’s washing machine tariffs took Americans to the cleaners. From November 2012 to President Trump’s 2017 inauguration, the price of laundry machines prices fell by more than 20 percent, to the benefit of American families. After the Trump administration restricted washing machine imports, prices surged by 17 percent.

As a result of higher prices, Americans either had to delay their purchases or they were left with fewer dollars to spend elsewhere, weakening U.S. economic security. 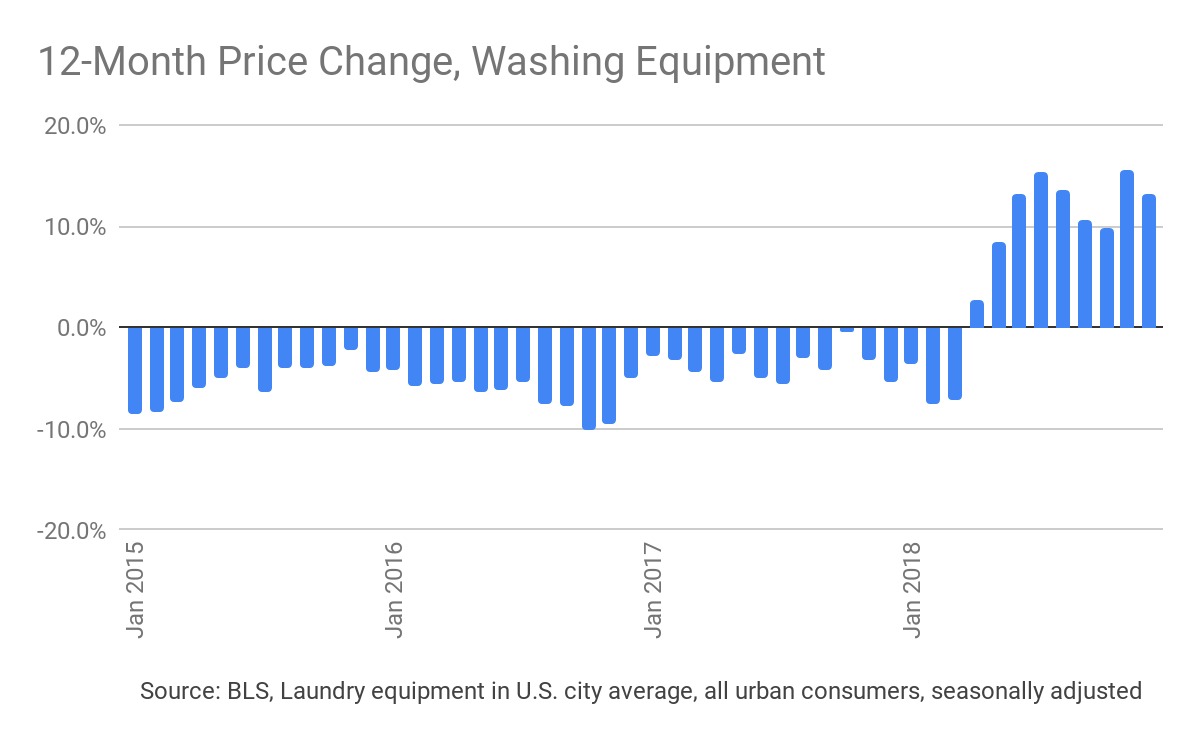 A similar story occurred in the market for solar panels. According to a report from the online solar marketer EnergySage, the Trump administration’s solar taxes increased the average price of a residential solar installations by $960 compared to what the cost would have been in the absence of tariffs, leaving Americans with less money to spend elsewhere and weakening U.S. economic security.

The White House: “One of the President’s first actions after taking office was withdrawing the United States from the terrible Trans-Pacific Partnership.”

Impact: After the United States quit the Trans-Pacific Partnership (TPP) instead of working to improve it, other governments moved ahead without the United States. Exporters in those countries now have an edge over U.S. exporters. For example, according to the U.S. Meat Export Federation, Japan’s participation in the new Comprehensive and Progressive Trans-Pacific Partnership (CPTPP), combined with the new Japan-European Union Economic Partnership Agreement, will cost U.S. meat exporters $600 million a year by 2023. Abandoning the TPP and launching trade actions against other allies weakened U.S. global influence.

Impact: The $12 billion in unfunded subsidies to farmers would not have been needed if not for the Trump administration’s misguided trade actions. Pat Roberts (R-KS), chairman of the Senate Agriculture Committee, observed: “We don’t need another subsidy program. We need to sell our product.” The costly farm handout came after the administration mistakenly thought other countries wouldn’t retaliate against U.S. tariffs, a costly miscalculation. Adding $12 billion in deficit spending weakens the U.S. economy.

Why the White House trade policy is a failure for farmers: U.S. farmers and ranchers are often described as “collateral damage” in the Trump administration’s trade war. As American Farm Bureau Federation President Zippy Duvall explained:

“White House trade advisor Peter Navarro’s recent comments that the damage this trade war is doing to certain sectors of the U.S. economy, of which we all know includes agriculture, is little more than a ‘rounding error’ are out of touch with the pain our farmers and ranchers are experiencing. Making farmers and ranchers pawns in this chess game is extremely risky for our nation’s agriculture economy and food security. Prices for all of our export-sensitive farm goods have tanked since May, when this tariff game started.”

A stronger and fairer approach for farmers was taken by President Reagan when he ended the U.S. grain embargo of the Soviet Union: “I indicated my opposition to the curb on sales because American farmers had been unfairly singled out to bear the burden of this ineffective national policy.”

The White House: “American steel and aluminum jobs are coming back following President Trump’s tariffs to protect domestic industries that are vital to national security.”

Why this is a mistake: Since President Trump took office, the cost of hot-rolled band steel for U.S. manufacturers has increased by 20 percent. Americans pay much higher prices for steel and aluminum than our foreign competitors pay. As a result, the administration’s steel and aluminum tariffs are weakening U.S. economic and national security. The Trump administration’s goal should be to make it easier to do business in the United States, not to make it more expensive to manufacture here. 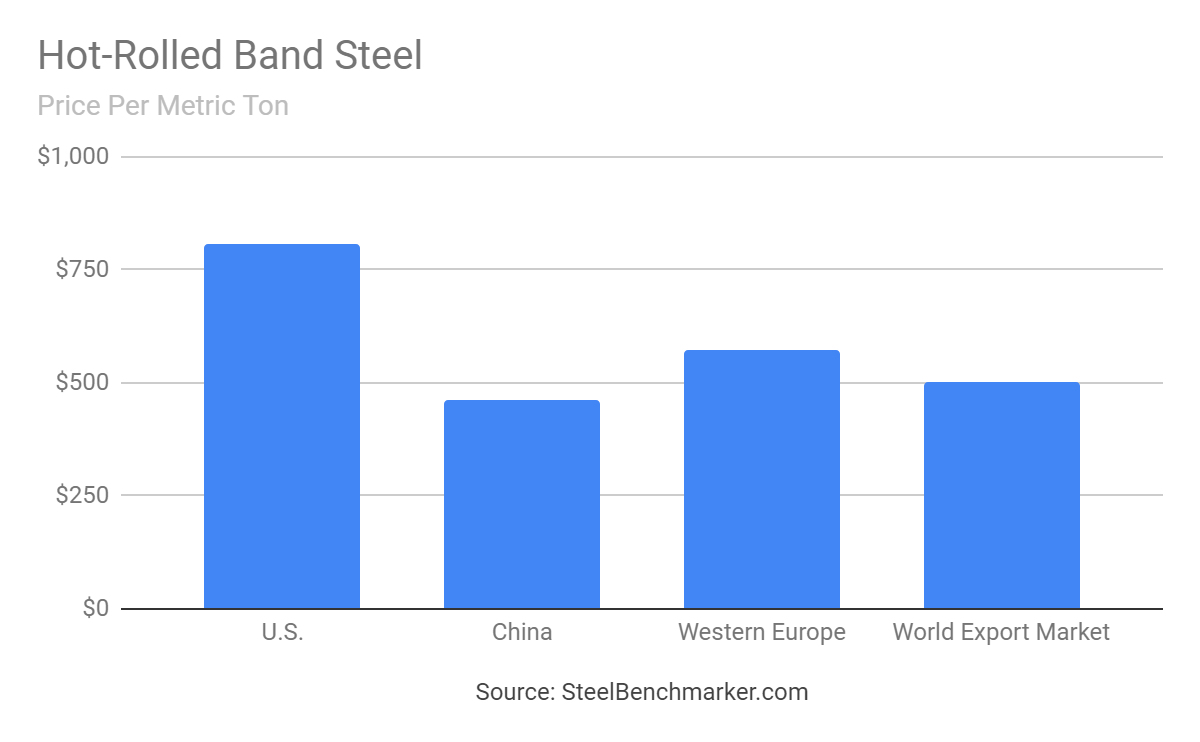 The White House: “President Trump is holding China accountable for its unfair trade practices, such as the theft of intellectual property, by imposing tariffs on $250 billion in Chinese goods.”

Impact: The goal of U.S. policy should be to encourage market-oriented reforms, not to impose billions of dollars in new taxes on Americans. According to the Office of the U.S. Trade Representative, the Trump administration’s trade actions have been unsuccessful: “China fundamentally has not altered its acts, policies, and practices related to technology transfer, intellectual property, and innovation, and indeed appears to have taken further unreasonable actions in recent months.”

Ironically, the President’s stated goal--forcing China to make big improvements to its intellectual property and technology transfer policies--would, if successful, unleash a massive wave of outsourcing from the United States to China, by making China a better place to do business.

The White House: “The President renegotiated the United States–Korea Free Trade Agreement to preserve and grow jobs in the American auto industry and increase American exports.”

Impact: The President actually weakened the U.S.-Korea Free Trade Agreement by extending U.S. tariffs on imported pickup trucks until 2041. Extending tariffs is the opposite of what free trade agreements are supposed to do.

Lessons for the Trump administration:

“We are convinced that increased protective duties would be a mistake. A higher level of protection would raise the cost of living and injure the great majority of our citizens. Such action would inevitably provoke other countries to pay us back in kind by levying retaliatory duties against our goods. Finally, we would urge our Government to consider the bitterness which a policy of higher tariffs would inevitably inject into our international relations. A tariff war does not furnish good soil for the growth of world peace.”

Instead of doubling down on its costly and self-destructive trade policies, the Trump administration should notify Americans that it will follow that wise advice in 2019. The White House’s attempt to convince people that imposing self-destructive trade taxes and regulations is some kind of historic accomplishments only detracts from any legitimate successes that the administration has achieved.