California taxpayers may have even more on their plate to worry about besides a ballot initiative increasing property taxes, raising the top state income tax rate to 16.8 percent, and state tax collections this year that have run ahead of projections. The new threat: a first-in-the-nation combination wealth tax and exit tax.

A.B. 2088, as amended on August 13 by 12 Assembly members and 2 Senators, would impose a 0.40 percent annual tax on a taxpayer’s worldwide wealth above $30 million, not counting real estate, based on market value at the end of each calendar year. Part-year residents would pay a pro-rated tax based on the number of days spent in California each year. New residents would have the wealth tax phased in for them over ten years.

The bill’s lead sponsor, Assemblymember Rob Bonta (D), argued that the bill would make sure “all California must step up and contribute their fair share” but did acknowledge that it “is not going to move through the process.”

Even if it did, it would likely have a severely detrimental effect on California’s already top-heavy tax base. The top 1 percent of income earners currently pay 46 percent of California’s income tax collections, and the left-wing Institute on Taxation and Economic Policy (ITEP) says California’s tax system is already the most progressive in the nation. Many California taxpayers seem to be getting sick of shouldering this burden — the most recent IRS migration data shows that, on net, over 60,000 Californians moved out of the state between 2017 and 2018, resulting in a net loss of $8 billion in adjusted gross income. Between 2010 and 2018, the state’s tax base shrank by $24.6 billion.

Perhaps in an effort to avoid the consequences of imposing ever-increasing tax burdens on their taxpayers, the wealth tax proposal includes an exit tax to ensure that no one escapes the loving embrace of the California Franchise Tax Board. A person subject to the tax who chooses to leave the state will still be subject to it for ten years, at a sliding scale, amounting to a 1.80 percent exit tax, as Figure A shows. Understatement of tax would carry a penalty of the greater of $1 million or 20 percent of the tax due, on top of existing tax penalties. 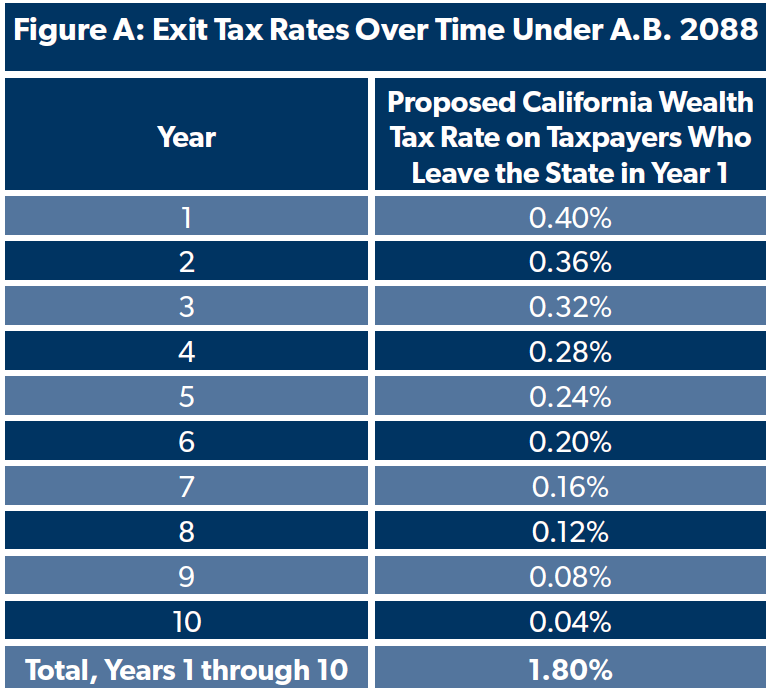 Aside from being bad policy, the proposal is plainly unconstitutional. The ten-year exit tax component violates the right to travel and impermissibly burdens interstate commerce: the ten  year period would greatly exceed the currently most excessive “trailing nexus” law (imposing taxes or tax collection obligations on someone after they’ve left), which is Washington with one year for business taxes and four years for sales taxes. California would be taxing well beyond its borders by claiming nexus over wealth not just outside the state, but even outside the country. Furthermore, imposing such a substantial tax burden on taxpayers who have moved to a different state and no longer enjoy any of the state services ostensibly paid for by tax collections violates every principle of tax fairness. The Eagles almost had it right with their song “Hotel California.” It turns out you can check out any time you like, and you can even leave… you can just never stop paying taxes!