It’s become an article of faith among many progressives that “the rich aren’t paying their ‘fair share’” of income taxes. This claim is used to justify the hundreds of billions in tax hikes on individuals and the $80 billion budget boost to the Internal Revenue Service to increase audits and tax enforcement in the Build Back Better reconciliation bill.

However, recent data from the Internal Revenue Service (IRS) provides a reminder that the federal income tax code is already highly progressive, with the top earners paying the lion’s share of all income taxes. Despite claims that the passage of the 2017 Tax Cuts and Jobs Act (TCJA) would rig the tax code in favor of the wealthy, the tax system became more progressive in the 2018 IRS data release even as income tax rates were reduced. The release of 2019 data shows that not much has changed on this front.

More significantly, 2019 was the second year under the reforms enacted through the TCJA. The IRS data show that the economic expansion it encouraged was beginning to boost middle class incomes. The income tax share of the top income earners fell, but this was because their share of Adjusted Gross Income (AGI) also shrunk. The changes were relatively small but could have potentially marked the start of a new trend of middle income wealth expansion. While more recent data is not yet available, this was likely cut short in 2020 by the pandemic and economic shutdowns that forced many people out of their jobs.

The newest data show that the top 1 percent of earners (with incomes over $546,434) paid nearly 39 percent of all income taxes. The amount of taxes paid in this percentile is nearly twice as much as their AGI share, consistent with the steeply progressive nature of the income tax. 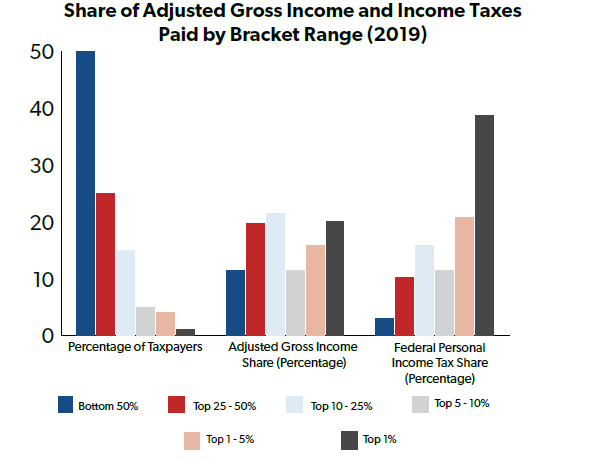 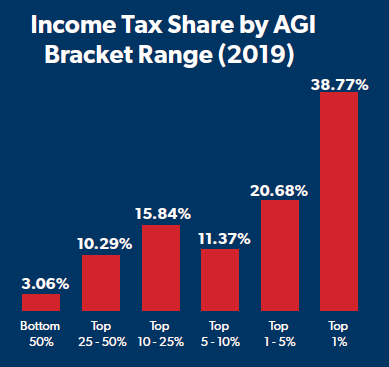 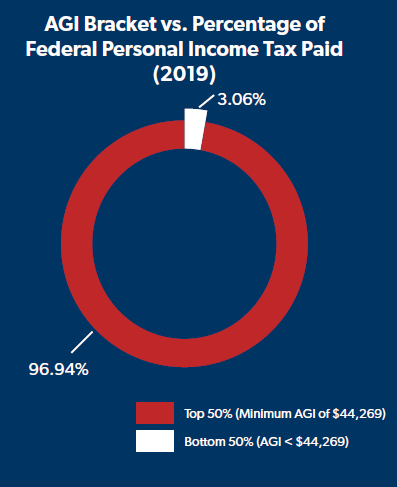 Starting in 2018, the TCJA lowered tax rates, nearly doubled the standard deduction, and expanded the child tax credit, among other changes. Despite the rate reductions, the result was a distribution of tax burdens that was in fact more progressive in the first year of the reformed tax code.

NTUF has compiled historical IRS data tracking the distribution of the federal income tax burden since 1980. In that year, the top marginal income tax rate stood at 70 percent and the wealthiest one percent of earners’ share of income taxes was 19 percent.[2] Over the next decades, their share of income taxes has increased even as the top tax rates were reduced. By 2018 the top rate had fallen to 37 percent yet the income tax share of the wealthiest one percent had doubled to 40 percent — the highest share reported in the decades of data.

The new data from the IRS covers the second year of reported data under the changes ushered into law through the TCJA. In 2019, the income tax share of the wealthiest earners slightly decreased, as did their share of AGI. For example, the AGI of the top 1 percent fell from 20.9 percent to 20.1 percent while their share of the income tax burden fell from 40.1 percent to 38.8 percent. Similar small decreases occurred through the top 25 percent of earners. More detailed information is available from the IRS in Table 3 below that shows that those on the lower end of the income spectrum, (with 2019 income in the range from $44,000 to $58,000) saw small gains in AGI from 2018 to 2019. 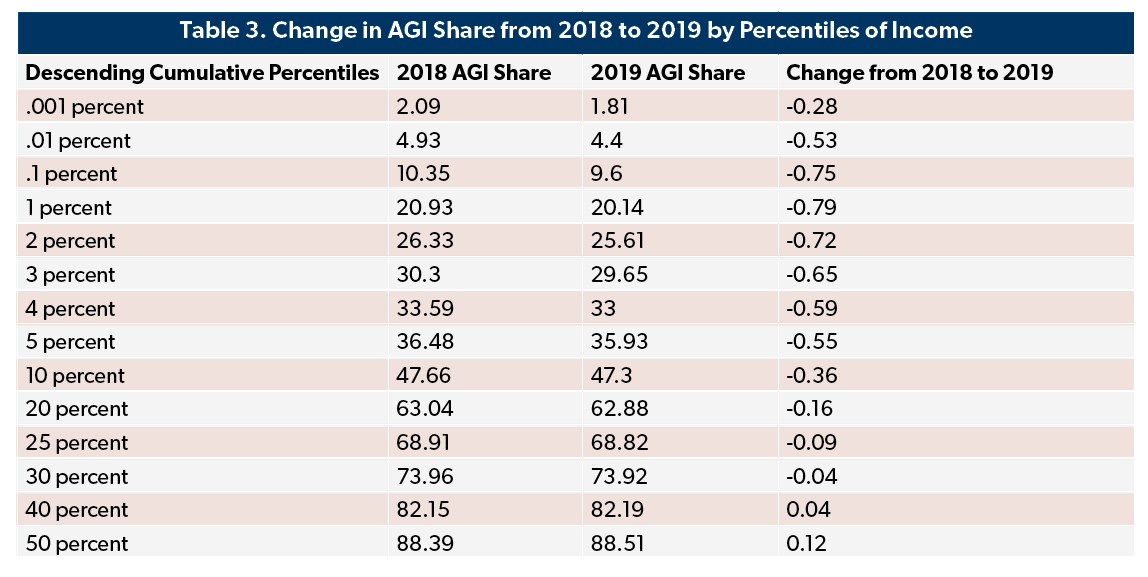 It is also important to remember that AGI is an adjustment of income for tax purposes. Many middle income earners are able to reduce their AGI by deducting IRA contributions. AGI also excludes many transfer payments and federal benefits. Analysis from the Congressional Budget Office shows that individuals in the lowest income quintile receive half of all means-tested transfers through government benefits. These transfers lifted their income in 2018 by 64 percent — $37,700 after transfers versus $22,500 before them.[3] 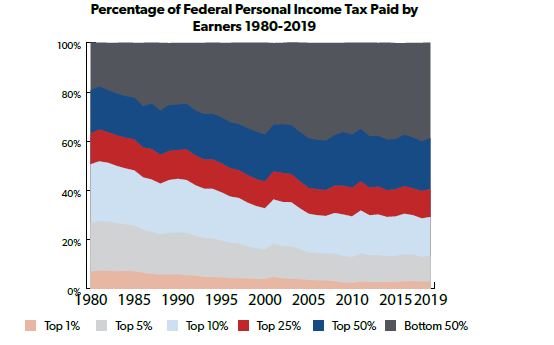 This new IRS data should help inform the debate in Congress about the fairness of the tax system as the President and his allies push for higher taxes and increased tax enforcement.

The decades-long trend is clear: the tax code has become increasingly progressive, and when people are allowed to keep more of their own money, they prosper, move up the economic ladder, and pay a bigger part of the nation’s income tax bill. Meanwhile, many low-income earners are afforded protections from income taxes through deductions and credits.

Even counting payroll and other taxes, the top income earners pay a substantial portion of taxes. The CBO finds that the highest income quintiles average total federal tax rate was 24 percent.[4] By comparison the lowest quintile’s was less than 0.1 percent due to refundable credits.

The BBB would impose hundreds of billions in tax hikes targeting wealthy individuals. Along with the complicated business tax hikes, the plan would undermine the much-needed economic recovery on the basis of the faulty assessment that the wealthy do not face significant tax burdens.

The BBB also includes large expansions of refundable credits which provide payments to individuals even if they have no income tax liability. If enacted, this would remove more individuals from the tax rolls. This raises basic questions of fairness as an increasing share of the tax burden falls on the shoulders of a small percentage of taxpayers. Politicians should consider the existing tax burden distribution while striving for a tax system that imposes minimal burdens on private sector wealth creation that opens up opportunities for all.

[2] National Taxpayers Union Foundation. How Have the Top and Bottom Income Tax Brackets Changed Over Time? Retrieved from https://www.ntu.org/foundation/tax-page/how-have-the-top-and-bottom-income-tax-brackets-changed-over-time.