New data from the Internal Revenue Service (IRS) shows that the number of filers with no income tax liability increased from 2017 to 2018. A rising number of filers owing zero income taxes normally coincides with a recession, as higher unemployment reduces earnings, but 2018 was characterized by strong economic growth. The break from the historical norm is likely a result of the Tax Cuts and Jobs Act of 2017 (TCJA), the systemic tax reform package that lowered tax rates, nearly doubled the standard deduction, and expanded and increased the refundable child tax credit.

This new data further cements the trend that has seen the percentage of filers with no income liability generally increase from where it stood nearly 40 years ago. This underscores the substantial progressivity of America’s tax code, under which higher-income earners pay a larger share of taxes while low-income earners are generally shielded from significant income tax liabilities. 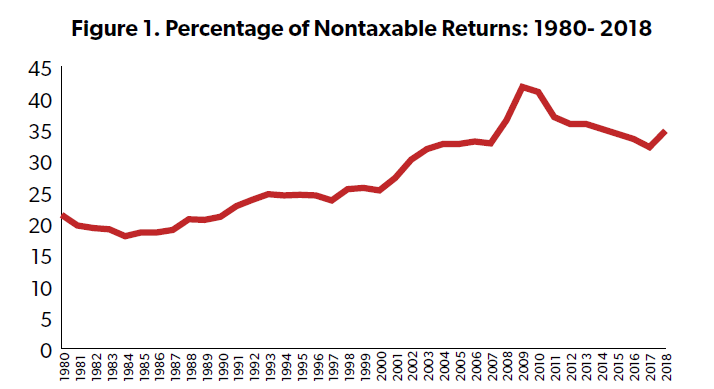 The Increase In Nontaxable Returns

In the ongoing debate regarding the fairness of the income tax system, the fact that a significant number of returns have no income tax liability is often overlooked. The latest data released from the Internal Revenue Service (IRS) shows that over a third of returns in tax year 2018 (34.7 percent of all returns) owed no income tax.[1] The share of nontaxable returns increased by 2.6 percentage points from 2017 when fewer than one in three owed zero taxes (32.1 percent).

The number of nontaxable returns is, in part, related to the economy. The last time the number increased was during the recession years of 2008 and 2009. The number of filers with no taxes increased from 32.7 percent in 2007 up to 41.7 percent -- two out of every five returns --  in 2009 as a result of higher levels of unemployment and tax relief (including refundable credits) in the American Recovery and Reinvestment Act of 2009. In subsequent years as the economy gradually improved and labor force participation grew, more people incurred income tax liabilities, yet still represented a smaller share of returns than in 1980. 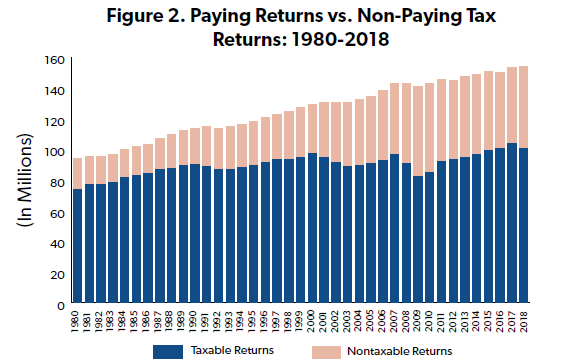 NTUF’s annual “Who Pays Income Taxes” study finds that the wealthiest pay an outsized portion of all income taxes.[2] For example, in 2017 the top one percent of income earners were responsible for over 38 percent of all income taxes, an amount that is nearly double their adjusted gross income share. Historical data since 1980 shows that the income tax code has grown increasingly progressive, with a small share of earners paying a greater share of the tax burden, even as the top marginal tax rate was reduced.

Over time, policymakers have adjusted features of the income tax designed to shield low-income workers from significant burdens. For example, the lowest income bracket for a married couple filing jointly for tax year 1980 imposed a 14 percent tax on income of at least $3,400 ($9,634 in 2017 dollars).[4] By 2017, the lowest bracket was adjusted to a 10 percent tax on income over $18,650. The standard deduction was also increased from $3,400 in 1980 ($9,634 in 2017 dollars) to $12,700 in 2017 for married filers, significantly reducing taxable income and simplifying returns.[5] (A similar expansion occurred for single filers.)

Expanded Standard Deduction in the TCJA

The TCJA made significant changes that increased progressivity. In addition to lowering rates, the tax reform law nearly doubled the standard exemption from $6,350 for single taxpayers and married individuals filing separately to $12,000, and from $12,700 to $24,000 for married couples filing jointly. While reducing taxable income, this change also simplified the process of preparing and filing taxes. The IRS has previously estimated that 26 million fewer filers would go through the more complicated process of itemizing deductions using Schedule A because of the TCJA’s increased standard deduction.[6] As Table 1 below shows, this is a large benefit to taxpayers. 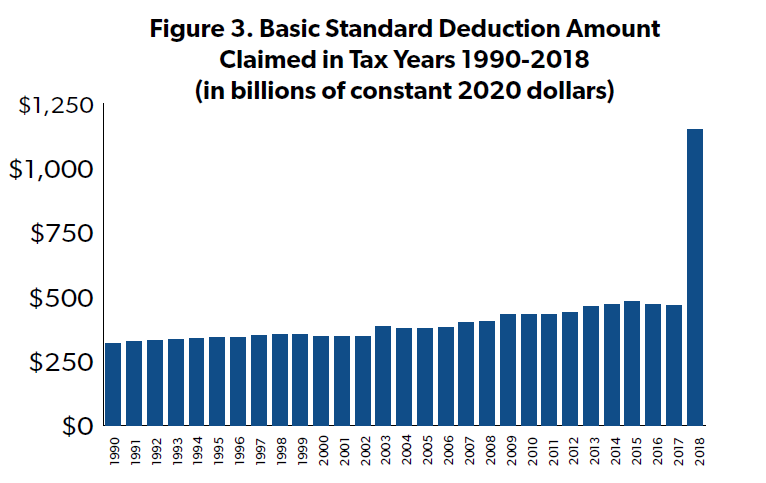 The TCJA also expanded and increased the refundable child tax credit. Eligible filers can receive refundable credits above and beyond their income tax liability. These credits reduce a filer’s income tax liability, but unlike regular tax credits, any remaining credit amounts are “refunded” as a cash payment. The IRS reports that $100 billion in refundable credits were claimed in 2017.[7] Fifteen percent of this amount was applied to reducing income tax burdens while the rest was essentially converted into subsidy checks, mostly from the Earned Income Tax Credit (EITC, $56.8 billion) and the refundable portion of the child tax credit which is called the Additional Child Tax Credit (ACTC, $23.3 billion). Because of these credits, filers with an Adjusted Gross Income of $30,000 or less had an average tax rate that was actually negative.[8] 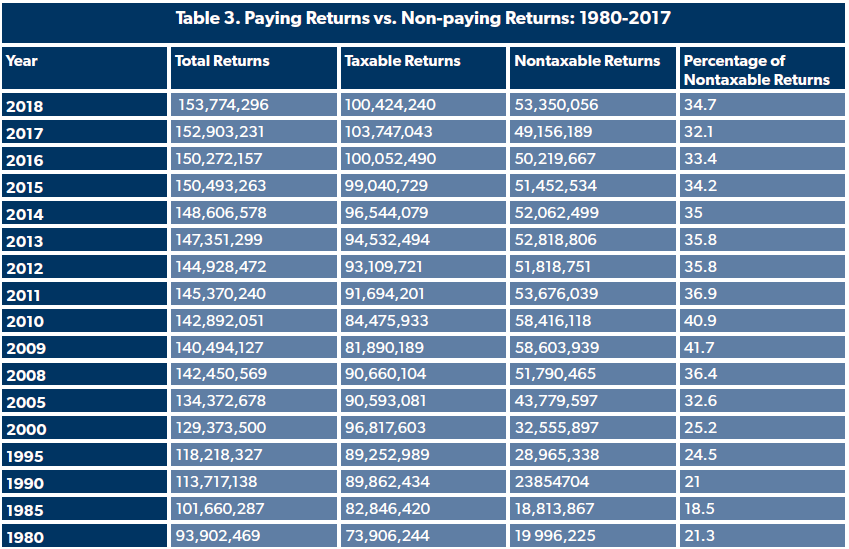 To be clear, saying a filer had no federal income tax liability is not the same thing as saying they had no federal tax liability whatsoever. Individuals with wage income are subject to payroll taxes to finance Social Security and Medicare, which is generally assessed at a flat rate from the first dollar of income. Some of the returns classified as not subject to a net income tax were also potentially subject to a host of additional taxes including self-employment taxes or “individual responsibility payments” for lack of health insurance coverage, among others.[9]

The latest IRS data shows that because of the changes implemented through the TCJA, over one third of filers, primarily low-income earners, had no income tax liability in 2018, with some receiving a negative tax rate. The increasing number of nontaxable returns experienced during a year of low unemployment is yet another indication that America’s tax code largely spares lower-income filers from federal income tax while imposing much higher burdens on the wealthy. While political debates often suggest otherwise, the fact is that America’s tax code has long been and remains substantially progressive.

[2] Brady, Demian. “Who Pays Income Taxes: 2017.” National Taxpayers Union Foundation. October 25, 2019. Retrieved from https://www.ntu.org/library/doclib/2019/10/2017-who-pays-income-taxes-2.pdf. As of publication of this report, the Internal Revenue Service has not yet released tax share data for tax year 2018.

[3] The IRS also notes that “classification as taxable or nontaxable was based on each return as it was filed and does not reflect any changes resulting from audit or other enforcement activities.” Figures may not total due to rounding in the sampling models used by the IRS to estimate the amounts.

[a]The font size here looks a little larger than the other tables in the pdf.