At the eleventh hour of negotiating the American Rescue Plan Act (ARPA), the $1.9 trillion COVID-related spending package passed in 2021, a provision was quietly inserted that ostensibly bars states from using the state aid included in the bill to “directly or indirectly” offset revenue reductions from tax cuts. Few in Congress appeared to understand at the time that this relatively obscure provision would kick off a bevy of lawsuits launched by states alleging that the law infringes on their rightful power to set tax policies for their state.

Given the myriad lawsuits, legislative efforts, and regulatory proceedings that impact whether or not the provision can in fact be enforced, a review of the current state of play could be useful.

Early on in the pandemic, states sounded the alarm that their budgets could not withstand the combination of higher unemployment payments and reduced tax revenue. Even after the March 2020 passage of the Coronavirus Aid, Relief, and Economic Security (CARES) Act appropriated $150 billion in aid to state and local governments, a group of states were still demanding $500 billion in emergency state aid.

By the time of ARPA’s passage nearly a year later in March 2021, however, state budgets had largely stabilized. Relaxed lockdowns led to more people returning to work and reviving America’s economic production, and the flood of federal dollars coming from the CARES Act and actions by the Federal Reserve led to sharp upticks in consumption, increasing states’ tax takings. The epidemic of nationwide state budget crises that states were warning about early on in 2020 had dwindled to minor budget shortfalls in a much smaller group of states, and nothing resembling a crisis.

As a result of their improved fiscal situations, some states were even starting to consider tax cuts well before the consideration of ARPA in the hopes of attracting remote workers with the freedom to move to more tax-friendly environments and still keep their jobs. Nevertheless, when ARPA passed, it included an additional $200 billion in federal aid to states despite a lack of compelling evidence that further funding was needed to avert disaster.

Though several tax cut proposals were already underway prior to ARPA’s passage, Senators Chuck Schumer and Joe Manchin wanted to ensure that state aid in ARPA was not used to offset these tax cuts. As a result, legislative language was inserted into ARPA barring states from using federal funds to “either directly or indirectly offset a reduction in net tax revenue.”

The addition of the words “or indirectly” in that phrase added significantly to the complications it engendered. After all — given the fungibility of budgets, it could theoretically be claimed that any revenue reduction is offset by the influx of ARPA funds — the restriction could be used to claim that any state that accepts federal funds under ARPA could not pass tax cuts at all for the next few years.

The Treasury Department recognized this and tried somewhat to scale back its interpretation of the provision when it first released interim guidance. In a 151-page document released in May of 2021, Treasury clarified that the provision would be enforced by comparing revenues to the previous years, adjusting for inflation and allowable offsets. Additionally, acting on suggestions by NTUF and others, the guidance clarified that the provision did not apply up to a de minimis threshold, and that changes that conformed to federal law were excluded.

Nevertheless, significant uncertainty remains. Most importantly, the recoupment mechanism effectively requires states to pass a tax cut in order to find out that it violated ARPA’s revenue provision. States cannot receive approval prior to passing a tax cut that they did not impermissibly use ARPA funds — they will find out whether or not Treasury views it that way when they do or do not receive notice from Treasury that it was clawing back their ARPA aid. That issue remains even after Treasury published a final rule earlier this year.

As a result of this provision and its associated ambiguity, the federal government faces six separate state-launched lawsuits asserting that the anti-tax cut language is unconstitutional. These cases are based on two questions of constitutional law.

The first issue is the extent to which Congress can impose conditions on federal funds provided to states. The U.S. Supreme Court held in South Dakota v. Dole (1987) that the federal government may indeed condition funds provided to states, but only if the conditions are related to a federal project or program, the condition is unambiguous, and the condition is not coercive. In South Dakota v. Dole, this related to a federal condition that states with a drinking age below 21 forfeit five percent of federal transportation funds, which the Court upheld.

It is difficult to argue that the ARPA revenue provision passes this test. The funds are not related to a federal project — in fact, they were provided with the express purpose of relieving state budget woes. The condition in question has proven complicated and confusing, or just about the furthest thing from unambiguous. And ironically, in order to argue that the condition is not coercive, the federal government will need to argue that states did not need the money in the first place.

Here are the six lawsuits filed by states and where they stand:

On March 17, 2021, the state of Ohio sued in federal court in Ohio, claiming that the ARPA provision is unconstitutionally ambiguous and constitutes a Tenth Amendment violation by commandeering state tax policy. On July 1, the judge sided with Ohio, holding that the provision was unconstitutionally ambiguous, and enjoined Treasury from applying the provision against Ohio. The federal government has since appealed the decision to the Sixth Circuit. Oral argument was heard January 26, 2022, and a decision is pending. NTUF filed briefs in the district court and the court of appeals.

On March 25, 2021, the state of Arizona sued Treasury Secretary Janet Yellen in Arizona, claiming that the provision is ambiguous and violates the Tenth Amendment. The case was dismissed on July 22, 2021 for lack of standing as Arizona did not have pending tax cuts. Arizona appealed the decision to the Ninth Circuit. Oral argument was heard January 13, 2022, and a decision is pending. NTUF filed briefs in the district court and the court of appeals.

On March 29, 2021, the state of Missouri also sued Secretary Yellen in Missouri. Missouri argued that any reading of the provision that includes the reference to “indirect” uses of ARPA funds is ambiguous, unrelated to federal interests, coercive, and violates the Tenth Amendment. The case was dismissed for lack of standing on May 11, 2021 and Missouri appealed to the Eighth Circuit. Oral argument was heard February 15, 2022, and a decision is pending. NTUF filed briefs in the district court and the court of appeals.

On March 31, 2021, West Virginia, along with twelve other states, filed suit in federal court in Alabama. The suit notes the size of the funds involved (over 20 percent of state budgets for many of the plaintiffs) as well as noting that localities and territorial governments were not subject to similar restrictions, to argue that the conditions placed upon ARPA funds were unconstitutionally coercive. The states also claim a Tenth Amendment violation.

On November 15, 2021 the judge agreed that the conditions were unconstitutionally ambiguous, and issued a permanent injunction against Treasury from applying the conditions against the plaintiff states. The federal government appealed to the Eleventh Circuit on January 14, 2022, and briefing will conclude in April. NTUF filed briefs in the district court and will soon file in the court of appeals.

On April 6, 2021, Kentucky and Tennessee sued Secretary Yellen in Kentucky. The suit claims that the conditions are impossibly ambiguous, unequal in their application (applying to states but not localities/territories), and coercive, as well as violative of the Tenth Amendment. The judge sided with the states on the commandeering issue on September 24, granting a permanent injunction against the Treasury from applying the provision’s conditions against the states. The federal government has since appealed to the Sixth Circuit, and briefing will conclude in April 2022  NTUF filed briefs in the district court and the court of appeals.

On May 3, 2021, Texas, Mississippi, and Louisiana sued Secretary Yellen in federal court in Texas. A motion to dismiss was denied, with the judge agreeing that plaintiffs have standing and have plausible claims on coercion, ambiguity, anti-commandeering, and equal sovereignty (by targeting only states that cut taxes). On July 12, 2021, the federal government filed a motion to dismiss, which is pending. NTUF filed a brief in the district court. 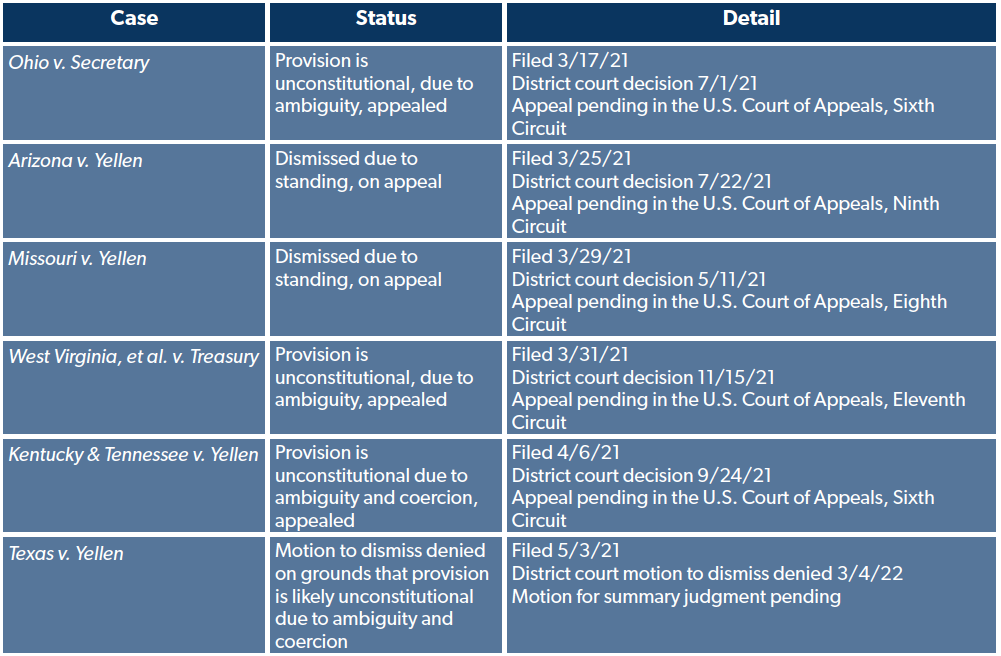 Prospects for the Revenue Provision

In total, judges have ruled in favor of plaintiff states in four out of six cases. In the other two cases, judges ruled against the states only on the issue of standing, not the merits. While the cases continue to be litigated in court, it appears likely that the provision will eventually be struck down as unconstitutional.

What’s more, Congress has signaled that it does not view the constitutional issues arising from the provision as worth the fight. An amendment to eliminate the provision at issue attracted the support of 86 Senators in August 2021. Though the law it was attached to did not pass the full Congress, it was a clear signal that legislators are interested in solving the issue by simply doing away with the provision.

Though the judicial and legislative processes to eliminate the provision are ongoing, state legislators are proceeding with their own agendas without regard to the likely-unconstitutional measure. Eleven states, including Arizona, Idaho, Iowa, Louisiana, Missouri, Montana, Nebraska, New Hampshire, Ohio, Oklahoma, and Wisconsin have all cut taxes since ARPA went into effect. They will surely be joined by many others, as states flush with money look to provide much-needed tax relief to their citizens.

The simplest solution would be for Congress to finish what it began last August and repeal the provision preventing states from using ARPA funds to “directly or indirectly” offset net revenue reductions. It was clear from the beginning that Congress did not foresee the constitutional issues it would unleash by including the provision in ARPA, but rectifying the problem is easy.

Yet in the meantime, states should not allow themselves to be held hostage by poorly-considered federal language. Judges have yet to side with the federal government on the merits, agreeing only on issues of standing in two out of six cases. On the other hand, Treasury is already enjoined from applying the provision against sixteen of the twenty-one states that have filed suit against it.

In the future, Congress should learn from this error and remember the importance of carefully considering legislative language. The fact that taxpayers have had to fund all this litigation on both sides just for states to assert their right to control their own tax policies can go down as little more than a monumental waste.