What Is a Tax Expenditure?

As defined by the 1974 Budget Act, a tax expenditure is a “revenue loss attributable to provisions of the Federal tax laws which allow a special exclusion, exemption, or deduction from gross income or which provide a special credit, a preference rate of tax, or a deferral of tax liability.”[1]A tax expenditure, simply put, is a revenue loss due to a special provision of the tax code.

Tax expenditures play an important role in debates about tax policy. They represent places where the federal tax code deviates from the theoretical ideal. Eliminating expenditures can end distortionary preferences, reduce tax complexity, and provide revenue to finance broader tax reform. But blindly cutting tax expenditures isn’t a perfect solution either. Some tax expenditures help to correct for inherent biases in ideal tax bases. Removing those would be economically harmful, so reviews should be done carefully.

The 1974 Budget Act requires that annual reports be created by the Congressional Budget Office (CBO) and the Treasury Department listing all available tax expenditures. The Joint Committee on Taxation (JCT) releases an annual report, even though they are not required to do so. CBO relies upon the JCT report to produce its list.

These distinctions might seem trivial, but they are important. While each of these categories consists of special provisions in the code, they impact tax liabilities in different ways. 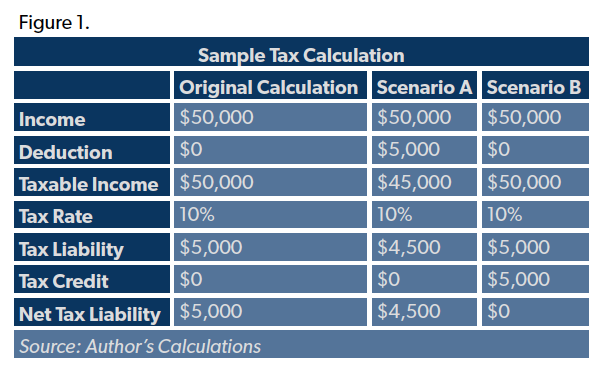 The individual, assuming a 10 percent tax rate, would owe $5,000 in taxes under a normal calculation. The deduction reduced their net liability to $4,500, saving the individual $500. But the $5,000 credit completely wiped out their tax liability. The credit is more valuable to the taxpayer.[2]

Who Benefits from Tax Expenditures?

An important consideration when discussing tax expenditures is who benefits from the provisions. Political rhetoric focuses on measures that reduce revenue for large companies, but the bulk of special tax provisions benefit individuals.

According to the Joint Committee on Taxation, tax expenditures reduced federal revenue by $1.47 trillion in 2019.[3]That amount is roughly equivalent to total estimated social insurance, retirement, and corporate income tax receipts in 2019. Of the $1.47 trillion in tax expenditures, 87.2 percent of the benefit is enjoyed by individuals. Corporations only receive 12.8 percent of the benefit. 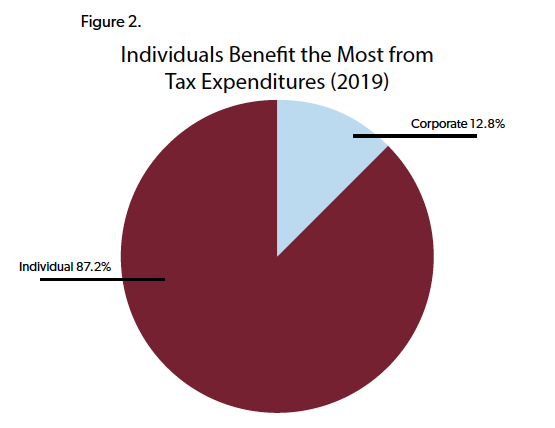 Of the almost $1.5 trillion in tax expenditures in 2019, a small number of provisions represent the majority of the revenue impact.

For individuals, the six largest provisions reduced revenue by almost $700 billion, or 54 percent of total costs. Among them are the exclusion for employer-sponsored insurance ($164 billion), the child tax credit ($121 billion), and the earned income tax credit ($71 billion).[4]

For corporations, two provisions represent more than 60 percent of total revenue reduction. These are the new Global Intangible Low-Taxed Income provision from the Tax Cuts and Jobs Act ($68 billion) and accelerated depreciation for equipment ($51 billion).[5]

Tax expenditure reports produced by JCT and others provide essential information. They illustrate where previous policymakers have decided to interject possibly unneeded provisions into the tax code to advance their pet projects or desired outcomes. These reports can provide a roadmap for broadening tax bases to facilitate other tax reforms. Eliminating an unneeded tax expenditure and using the revenue to lower tax rates is generally a worthwhile exercise.

But such analysis should proceed with caution. It’s important to consider what tax base is preferred when debating tax expenditures. Traditionally, tax expenditures reports have used something akin to the Haig-Simons definition of income. Economists Robert Haig and Henry Simons argued that income equals consumption plus annual change in net worth.[6]Tax provisions that do not include all of an individual’s consumption, saving, or annual asset appreciation would theoretically be a tax expenditure under this definition.

But the Haig-Simons definition of an income tax can be biased against saving and investment. For example, the amount that an individual saves for the future would be taxed under this definition when the money is earned and saved, but also when it appreciates in value.[7]This discourages people from saving, a less than ideal outcome. Saving is an important driver of economic growth, which is why the tax code should be neutral to saving and investment.

Removing special tax provisions that limit double taxation or reduce the tax code’s negative impact on saving and investment would be a step backward, even though it would shorten the list of expenditures.

This applies to more than individuals. A corporate income tax base should be constructed by adding total revenues and allowing deductions for cost to arrive at an accurate income (net profit) figure. Businesses should be able to deduct their expenses, be it for labor, buildings, machines, or rent. Unfortunately, JCT does not treat these similarly. Deductions for labor are not a tax expenditure, but immediate (or accelerated) deductions for capital investments, like buildings and machines, areconsidered tax expenditures.[8]This differing treatment between labor and capital investments leads to a bias in the tax code (and in tax expenditure reports).

On the other hand, the tax code also contains a number of corporate tax provisions that make little sense under either a normal income tax base or a consumption tax base, such as credits for wind production or biodiesel. Eliminating those to finance broader reforms makes perfect sense. It removes a distortionary preference from the tax code and provides an offset to fund other pro-growth reforms.

Tax expenditures play an important role in tax policy. They can correct for inherent bias in the tax code, ensuring that saving and investment are not punished. However, they can also advance special interests and increase complexity for taxpayers. Limiting the $1.4 trillion in annual tax expenditures to finance pro-growth tax reforms is ideal, but policymakers must be careful when combing the pages of reports. Eliminating the wrong tax expenditure is economically harmful.

[2]It is possible to equalize the net tax impact of a credit or deduction. In this example, a credit of $500 would have the same impact as a $5,000 deduction.

[4]The others include the lower tax rate on capital gains and dividends and the net exclusion for both defined benefit and defined contribution retirement plans.

[6]Bartlett, Bruce. “The End of Tax Expenditures As We Know Them?” Institute for Research on the Economics of Taxation, June 13, 2001.

[7]Ideally, they’d also have their tax liability reduced if the asset falls in value.