The Trump administration has imposed 25 percent taxes on $234.8 billion in imports from China under Section 301 of the Trade Act of 1974. This represents a nominal tax hike of as much as $58.7 billion — the third-largest in inflation-adjusted dollar terms since World War II ended.[1]But things could soon get much worse.

President Trump plans to impose a 5 percent tariff on imports from Mexico starting on June 10, possibly increasing to 25 percent by October 1.[2]He is also considering adding a 25 percent tariff to an additional $300 billion in imports from China.[3]Tariffs on washing machines, solar goods, steel, and aluminum add billions of dollars more to the burden on U.S. taxpayers. If the Trump administration follows through on all its tariff threats, the combined result will be far and away the largest tax increase in the post-war era in real dollar terms. In fact, the worst-case scenario is a tax hike more than two and a half times larger than the previous record holder.

After more than two years of historic pro-growth tax and regulatory reform, tax increases of this scale threaten to undermine the economic expansion that has driven unemployment down to levels not seen since 1969.[4]

Measuring the Cost of Tariffs

The actual revenue impact of tariff increases depends on whether the volume of imports changes. A recent study found that 2018 tariffs reduced the volume of targeted imports by 31.5 percent.[5]If one assumes that additional tariffs impose a similar impact on the products targeted, the potential impact of all the Trump tariffs would be a $151 billion tax increase, which would easily be the largest in the post-WWII era in dollar terms.

These estimates of tax costs do not include additional economic costs resulting from tariffs. One recent study calculated an annual tax impact of $62.9 billion, with an additional deadweight loss of $95.9 billion resulting from consumers switching to more expensive suppliers.[6]Another predicted a $62 billion reduction in U.S. gross domestic product (GDP) by 2020.[7]

An Extraordinary Abuse of Taxing Authority

Most of the major post-WWII tax increases either included significant spending reductions as part of deficit-reduction packages,[8]or were enacted as special measures to fund the Korean and Vietnam wars.[9]President Trump’s tariffs not only are not linked to spending reductions, but they have actually been accompanied by billions of dollars in new spending on aid to farmers hurt by the trade war.[10]These prior tax increases also resulted from legislation passed by Congress. President Trump’s trade taxes represent an extremely rare example of taxes being imposed unilaterally by the executive branch with little or no congressional oversight.

The President’s alleged power to unilaterally impose new taxes on imports from Mexico is based on the International Emergency Economic Powers Act.[11]The legal basis for this action is unclear. According to Senate Finance Committee Chairman Chuck Grassley (R-IA), “This is a misuse of presidential tariff authority and counter to congressional intent.”[12]The taxes on imports from China were imposed under Section 301 of the Trade Act of 1974, possibly in violation of World Trade Organization (WTO) rules.[13] 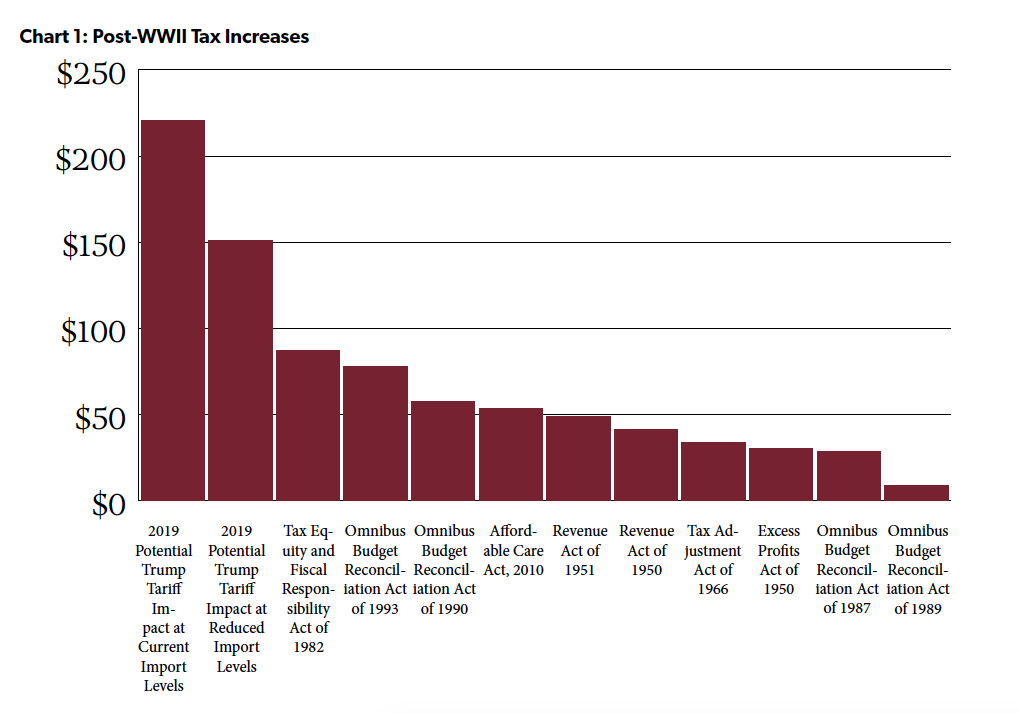 During the discussions on expanding infrastructure spending, there has been a proposal to raise the gas tax by 25 cents per gallon, increasing revenues by a yearly average of $39.4 billion over the next decade.[14]According to Politico, White House officials have pushed back against the tax hike because “it would ultimately undercut the gains consumers received from the Republicans’ 2017 tax bill.”[15]Economists warn that Trump’s trade taxes pose the same risk.[16]

Outgoing Congressional Budget Office Director Keith Hall recently observed, “Tariffs are taxes, taxes slow down the economy, and that’s sort of how this is working. And then on the other side when you have a retaliation that’s another anti-stimulus on the economy.”[17]

President Trump once said: “TAX CUTS will increase investment in the American economy and in U.S. workers, leading to higher growth, higher wages, and more JOBS!”[18]He should end the significant import-tax increases he has imposed on Americans, and Congress should pass legislation limiting the ability of the executive branch to unilaterally increase taxes in the future.

[1]Tempalski, Jerry. U.S. Department of the Treasury, “Revenue Effects of Major Tax Bills,” OTA Working Paper 81, September 2007; Estimated Revenue Effects Of The Amendment In The Nature Of A Substitute To H.R. 4872, The “Reconciliation Act Of 2010,” As Amended, In Combination With The Revenue Effects Of H.R. 3590, The “Patient Protection And Affordable Care Act (‘PPACA’),” As Passed By The Senate, And Scheduled For Consideration By The House Committee On Rules On March 20, 2010, Joint Committee on Taxation, JCX-17-10, March 20, 2010; Congressional Research Service, “Trump Administration Tariff Actions: Frequently Asked Questions,” February 22, 2019; Bureau of Labor Statistics, and authors’ calculations. PPACA tax increase based on annual average of estimated revenue impact from FY 2011 through FY 2019.

[2]“Statement from the President Regarding Emergency Measures to Address the Border Crisis,” The White House, May 30, 2019.

[14]Donahue, Thomas J. “Our Nation’s Crumbling Infrastructure and the Need for Immediate Action,” Statement of the U.S. Chamber of Commerce Before the Committee on Ways and Means of the United States House of Representatives, March 6, 2019.